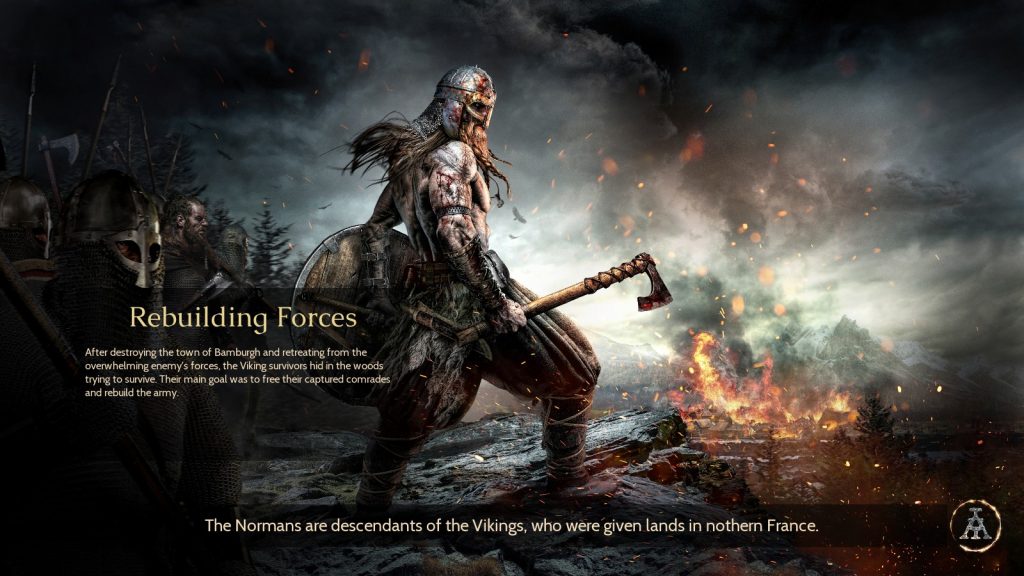 I’ve played so many games already this year about mental health or games that make you look for a deeper meaning, and while I greatly admire that, it’s nice to take a break and simulate some Viking raids!

Ancestors Legacy is an RTS squad-based war game set in Medieval Europe. While the description of the game tactfully uses the phrase “inspired by medieval European history,” covering the creators against accusations of historical inaccuracy, one can’t help but admire the passion that these creators seem to have for history. There are lots of references to real past rulers or conquers, with little facts in the loading screens. I don’t know if the creators intended to teach history to their players, but I enjoyed the thought behind it. Mostly because it made the wars within the game feel more real.

In most RTS games that I’ve played, you choose between playing for the good side or the bad side. But in the real-world war isn’t that black and white. The sides in Ancestors Legacy depend on who you chose to play as, whether that’s the Vikings, Anglo-Saxons, Germans, or Slavs. No-one is the “baddies” and no-one is the “goodies.” Frankly, as medieval history will tell you, they’re all terrible and blood-thirsty! The Vikings appear to be the main party of the game, as the ones you have to play as first in the single-player campaign, which was a little disappointing. But Vikings are popular right now, what with the TV show. Plus, as I said, it’s obviously something these guys care and know about. 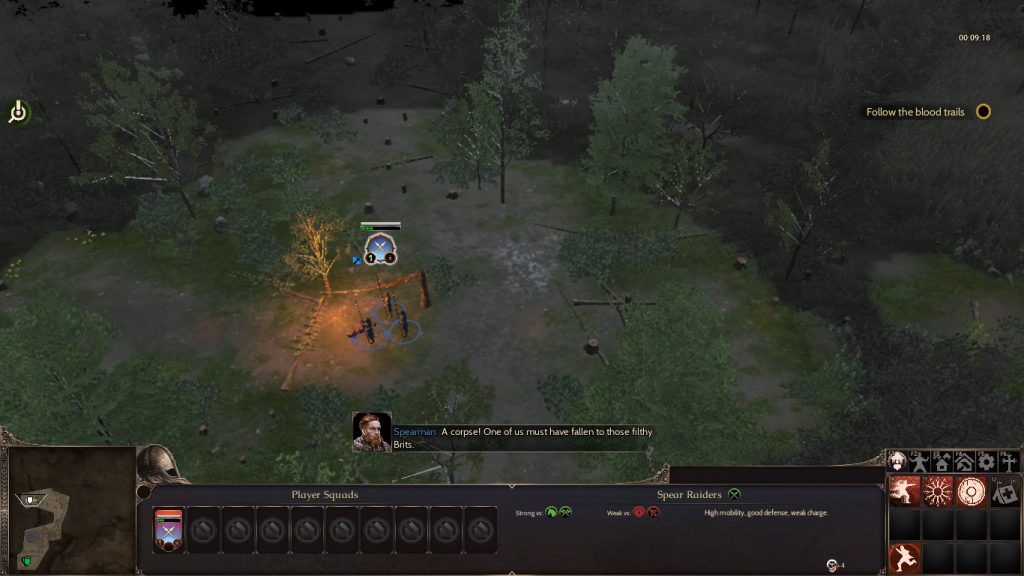 It probably helps that I’m already a big fan of tactical war games. I’m sure every fan of fighting games will disagree with me, but I’ve always found it a lot more satisfying to win a war through logic and strategy, then by smashing buttons to attack your opponents. In Ancestors Legacy, you have to constantly be on your toes. You can’t just conquer a camp and move onto the next one – the enemy could be back in a matter of seconds to reclaim what you’ve taken. Strategy is involved in every part of the game. Weather affects the game, whether it’s day or night, even the path you take to attack affects how your army will do. A lot of RTS games promise this, but few deliver on it as fully as AL.

I won’t say that it’s impossible to come back after a bad start – but the game doesn’t make it easy for you! Luckily the game autosaves after important checkpoints and you can save at any time you want. So, if you do mess something up beyond repair, your whole mission isn’t lost. It’s a simple point, but so many games abandon a decent save system these guys and including it shows a lot of respect for the player. In battle, there is also this nifty little retreat function which allows your troops to run away if they’re in a real pickle. (On one mission this resulted in them running away to exactly where they needed to be in order to rescue some of their kidnapped fellows – so that was pretty great!)

We Will All Go Together 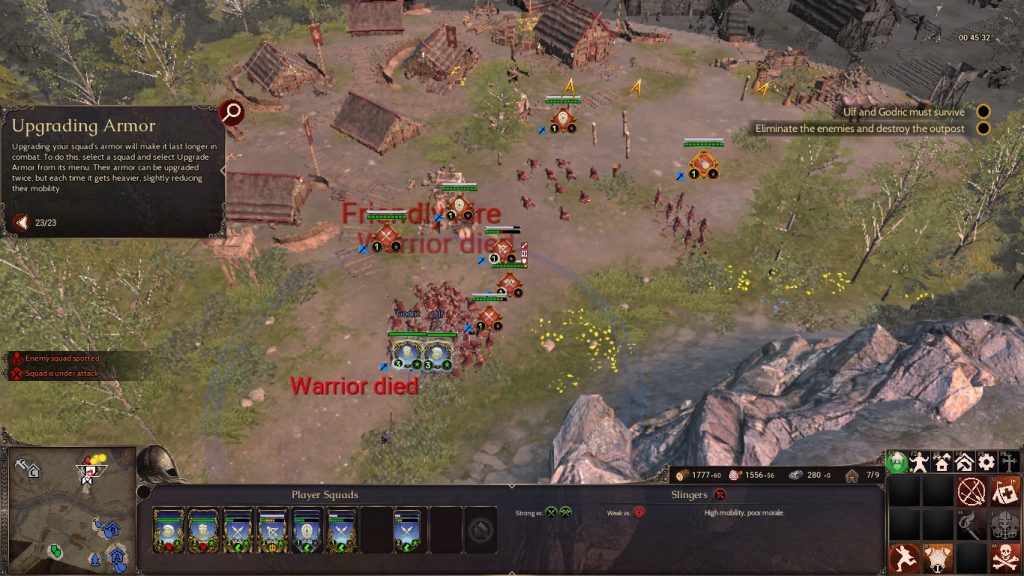 Ancestors Legacy does come wide a wide variety of armies which are different depending on who you choose to play as. For example, Anglo-Saxons can’t recruit cavalry. At the beginning of each level, you’re usually given one troop type but can recruit others when you gain the necessary buildings. The troops level up by defeating enemy armies and you can improve their armour, skills, etc by purchasing upgrades for the buildings. All standard RTS stuff really. Your armies are really easy to control and pretty good at figuring out what to do if you’re distracted by something on the other side of the map.

Along with building your armies, you must gather resources: wood, iron, and food. You use these to build more, increase your armies or purchase upgrades. You can increase your resources by invading other villages and forcing their “peasants” to work for you! I very much enjoyed the focus on combat rather than resources. Once you set peasants to work you don’t need to revisit them, they’ll just carry on until you tell them not to, while you get ready for war.

There are still a lot of things I don’t fully understand about the combat in Ancestors Legacy – such as how your armies health works or how to avoid “friendly fire.” It doesn’t feel like this was created for those new to RTS games since you’re left to figure so much out for yourself. But I quite liked that there was something new to discover on every level and how the game is constantly forcing you to adapt at every turn. My big pet peeve would be that it’s hard to tell what’s going on in the heat of battle. The armies mash together so much it’s hard to know sometimes if you’re winning or losing until the battles over.

Back in the Old Games 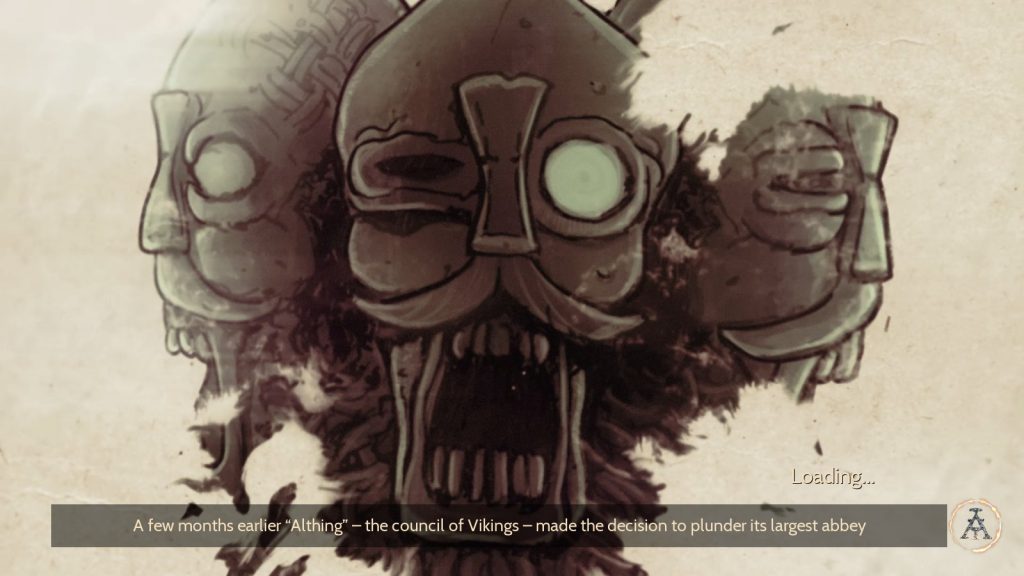 I really enjoyed the atmosphere Ancestors Legacy tries to set up. You’re immediately greeted by this Nordic style chanting when you load the game up, which really revs you up to go fight some dudes!

To me the artwork in the game feels like the creators went over the top, trying to make the game as gory as possible. True, this is a game inspired by real massacres that happened across medieval Europe, but when you’re staring at a graphic drawing of some guy with his eyes hanging out his sockets, you start to wonder who that’s for. I’m not a squeamish person, I’m just not sure what to think when games inject gore for the sake of it. That might not be the case here – the artwork is very detailed and very well done. But I am suspicious of it. Overall though I’d say the game is very visually pleasing and highly detailed.

I figured a lot of stuff out on my own rather than the game telling me, which again isn’t really that much of a pain if you’re a fan of RTS games. But I have to admit I found the game’s tutorials or hints rather selective. At times the game-arrows would take me along the correct path step by step – other times I had no idea what I was doing and just had to run around the map until I found out. Something that Ancestors Legacy does have, which I’ve encouraged all games to have for a while now, is a difficulty slider bar in the options. As with most RTS games, the difficulty in AL is a little random, with some early levels being harder than later levels. But that’s okay because you can just adjust the difficulty accordingly. 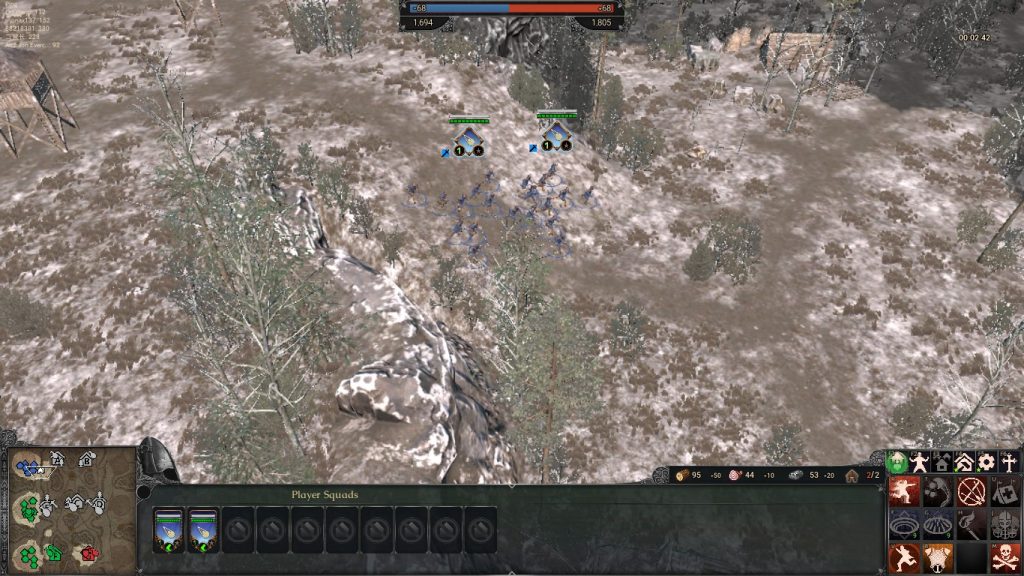 I did find the single-player campaign more enjoyable than the online multiplayer, but that’s a personal preference more than anything else. Pretty soon into the beginning of multiplayer battles, it’s clear who is going to win and if that’s not you, you basically just try your best to hold on to your remaining buildings and your dignity.

I just don’t see the appeal of playing an RTS game on a multiplayer server and having to worry about everybody else, when you can just play it in your own time and under your own rules. I preferred the quick multiplayer missions since they were faster, but then you may end up fighting with allies rather than just one on one, which was more annoying

I’m the sort of person who likes to hang back at the start of a mission to build up a few more units, wait for a few more resources to be gathered and make my way around the map. But ten seconds into a quick-event someone in your ally team has already started conquering, as have many on the opposing sides. Since you can’t communicate with your allies, I was never sure if I was helping or not!

Okay, so the Vikings didn’t text each other during raids- but I’m sure if they lived in a time where the technology was available they’d have loved it. I’m also well aware that you don’t have to play with allies, but I found it was quicker to find a server if you allowed that option. Which also makes me wonder why I would wait ten minutes to play, when I can play by myself right now. But I guess I just hate fun. 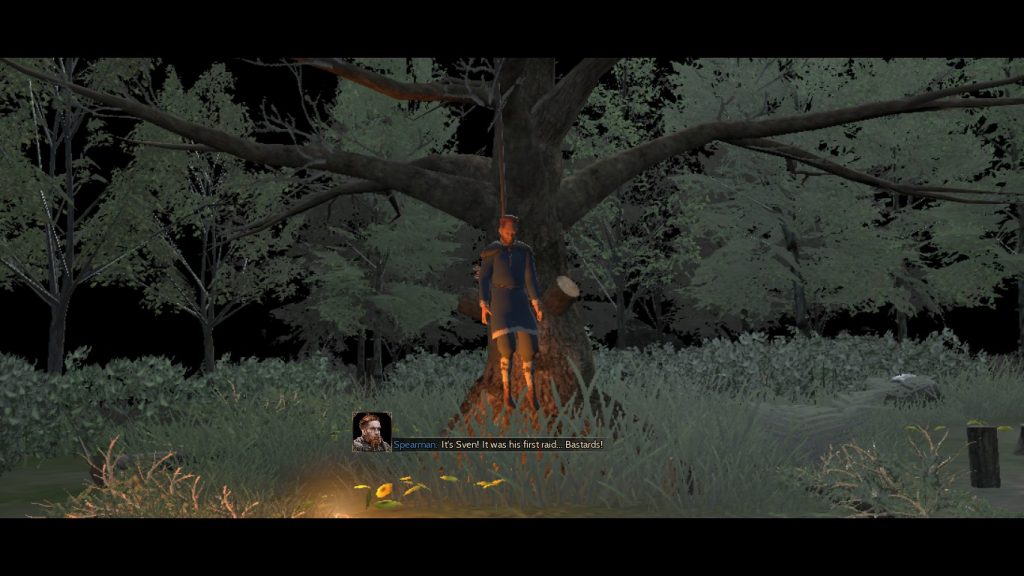 Ancestors Legacy is a very unique game, even if it does feature the same war and conquer elements that we want from RTS games. I can’t deny that the different missions all look rather the same, regardless of which European country you happen to be torturing, but the game makes up for it with the detailed cutscenes. It’s interesting to see a game that takes real-life events, albeit events that happened so long ago it’s okay to have fun with them and shows them in a way that’s enjoyable for a modern audience. Sure, that whole running across Europe pillaging and cutting heads off was awful when it was happening- but I’m sure those tortured would feel better about it if they knew sometime in the future there would be a decent game inspired by the events.

Full disclosure: This review is based on a PS4 review copy of Ancestors Legacy given to HeyPoorPlayer by the publisher.