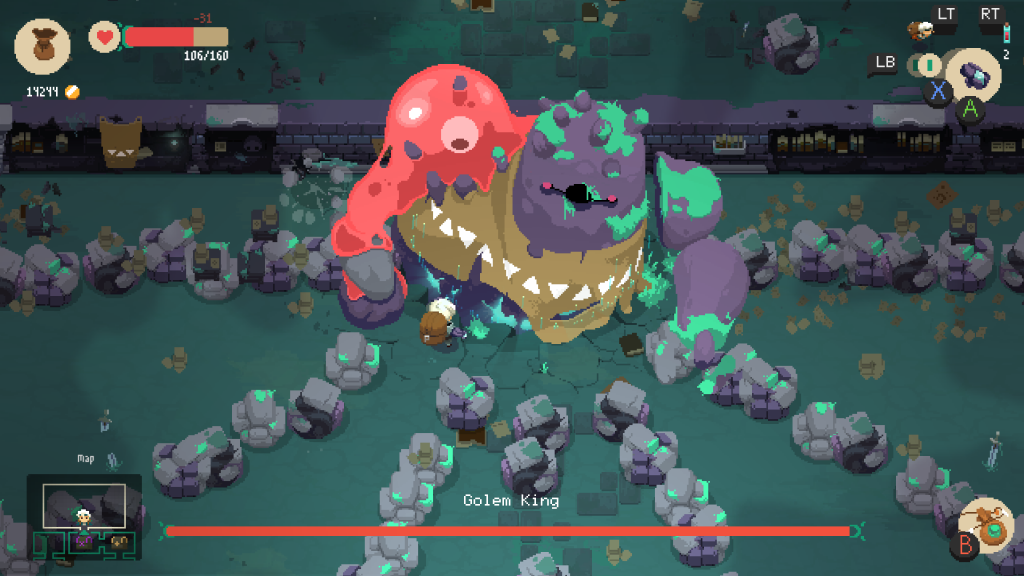 Almost 17 years ago, I got my first job Moonlighting in a small computer store in my hometown.  I washed windows, swept floors, handed out tools, took out trash, and mostly asked questions. The pay was 5 dollars an hour under the table – or a free computer game per shift. What some may call child labor, I called a wonderful experience – I was working in what I assumed would be my life-long chosen field: Computers.

One night I had a vivid dream. I was 40, balding, wearing glasses, and content. Running that little computer shop, interacting with people I’d known for years. A regular community staple. This, I thought, must be my destiny.

It was not. My path was topsy-turvy, with stints in Tech, but also stints as a TV producer, Big & Tall male model, and some lunatics even hired me to write about games professionally on an outlet you may just be reading right now. Life is messy – especially for those with a fire in their belly, seeking adventure.

Alas, adventure seekers have bills to pay too, and that is the crux of the absolutely wonderful Moonlighter; an action-RPG about a gray-haired man who embarks on adventure at night, while running a tidy shop by day – and may just save the town while he’s at it.

Never Tell Me The Odds 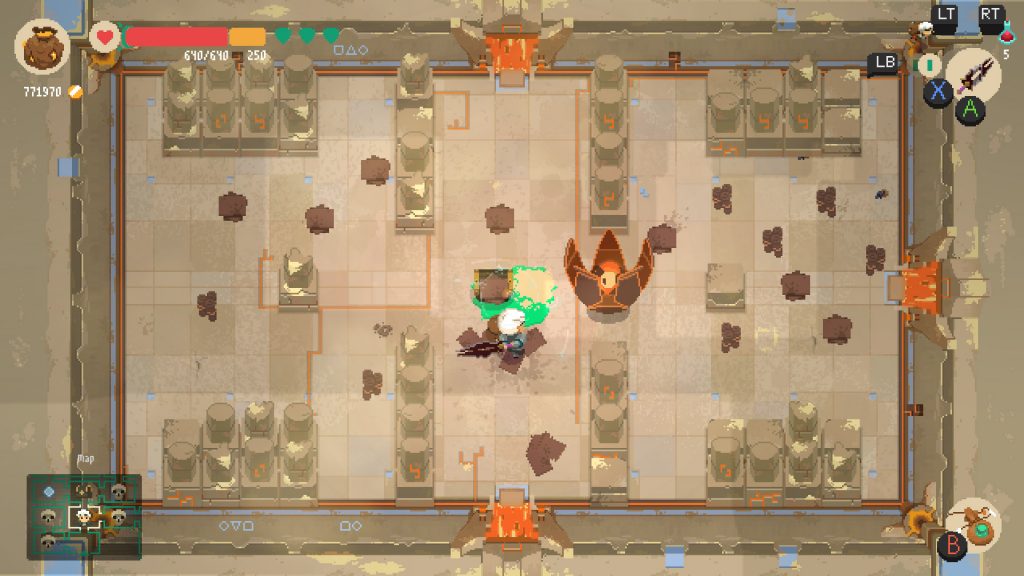 Moonlighter begins with a wordless tutorial inside a dungeon, with wall etchings demonstrating your moves. Namely attacks, charged attacks, and a combat roll that can be used to dodge enemy fire, and leap over chasms and enemies.

First impressions are stellar. The game is as gorgeous as it looks in trailers and screenshots, and it handles wonderfully. Bill, the player protagonist, is nimble, swift, and responsive – with a few different weapon classes to fit your specific gameplay needs (bows, swords, etc) – all upgradable and ‘enchantable’ too.

Traversing a dungeon in Moonlighter is typical rogue-lite faire. Dive in, dive down, and the further you go the harder it gets, and the better to loot gets as well. What you do with that loot is the fun part…but we’ll get to that later.

What’s important about the dungeon crawling is that it all feels great, especially as the enemy variety increases and you start to pick up on what tactics need employing to survive a given room. For example, there’s a slime that will you suck you in, poison you, and spit you out facing the wrong direction. Meaning once you’re out you *need* to turn around quickly before it repeats its attack. There’s another enemy with a sword and shield you need to dodge through to stab in the back, and others that hover until you lure them in to attack while dodging out the way, then smash them to pieces. It’s far more visceral and engaging than anything Zelda’s ever offered.

I cannot stress how good this all feels. There’s a whole game here. Tight control. Great art. A decent amount of variety. The proverbial meat and potatoes of Moonlighter are cooked and seasoned to near-perfection, save for some slowdown in busier areas…On my Xbox One at least.

If this game was sold primarily on this mode, and they added some Rogue: Legacy like progression where you need to spend the gold you earn in the dungeon to unlock new buffs, it would be a solid game and a solid recommendation for fans of the genre – especially due to its unique art style.

But Moonlighter‘s gimmick (or draw, depending on who you ask) is what you do with the various bobbles and gimlets you score from the game’s various dungeons. 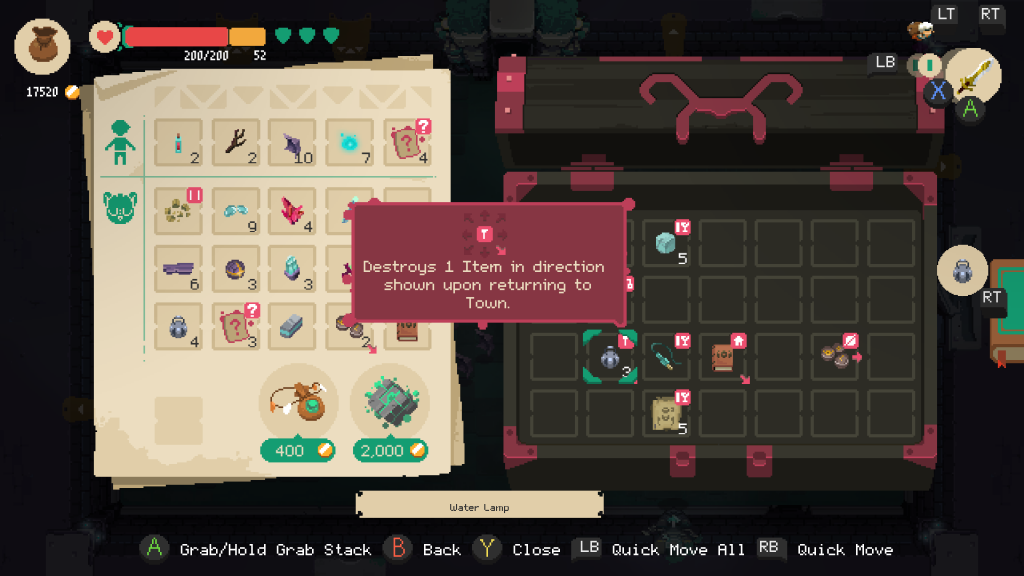 Moonlighter has its name for a reason…because you have a day job selling the wares you accumulate in the dungeon. And it is here Moonlighter becomes just about the most addicting game I’ve ever played. The goal, upon returning with all these doodads and gizmos, is to find the correct price, sell them, then use the money for shop upgrades, new town businesses or buff-having decorations for your shop.

Each day you place whatever items you have up for sale in your shop like a reverse Harvest Moon, set the price, open, and try to make some money. The crux of it is how you set those prices. Too high and they won’t buy. Too low and you’ve seriously undercut yourself. Thankfully each customer will express themselves with a smiley or frowny face upon regarding an item’s price, the highest being a big, “I can’t believe this is so cheap!” grin, and the lowest being a traditional anime sad-face with the stress marks and all. The two middle ones – a gleeful smile and a non-plussed ‘well fine’ face are what you’re aiming for in terms of maximizing effort-to-profit ratio.

I fondly remember selling a 10 stack of an item I thought was pretty ‘meh’ for about 1k, only to realize it was worth thousands of gold…per item. Lesson learned.

You’ll also be contending with thieves who will wander in, and you’ll have to tackle them before they get out the door…which is tricky as you have to manually ‘sell’ each item by sitting near the register – and you don’t want to keep customers waiting. Writing about it now this all seems a little…weird, and it is, but it’s also a lot of fun – and really gratifying.

As you progress you’ll be able to unlock an armorer for gear upgrades, someone to craft potions for you, an undercooked ‘banking’ mechanic, and a couple other businesses as well. All serve some purpose, though some – namely the enchantress and the blacksmith, are much more important than others.

Another neat touch: if you’re looking to hold on to the items that will allow you to craft a given upgrade, you can add that item’s ingredients to a ‘wish list’ so you know not to sell them.

There are a couple of caveats. While there’s a supply and demand system, you don’t need to pay much attention to it once you find an item’s ideal price. Similarly, there’s no real punishment or downside to setting a price as high as it can possibly go and still be bought – save for an achievement berating you for fleecing your customers.

If you take that path as I did, you’ll eventually find yourself with a ton of money, and not much to spend it on until you progress in the dungeon. It may not make much economic sense, but gameplay wise, it prevents you from simply hustling your way to baller status in the first few hours and breezing through the rest of the game.

There’s also no taxes or upkeep costs. Meaning you’re in a no-lose scenario when it comes to your shop. Your only competition is yourself, seeing if you can beat your best business day, and finding *just* how much a golem history tome is worth, and getting every penny out of it.

There’s no reputation system, or town status indicator, which would be a welcome addition and create a risk/reward dynamic not unlike the one found in the dungeons.

So, while the shop-side of things feels…a little undercooked, it’s clear the developers wanted to provide an exciting game where the challenge lay in the dungeons and in gameplay, rather than in the ledgers and minutia of running a small business.

The business side of things is a *ton* of fun, just as deep as it could be.

Though it’s probably how it should be. I’m a sucker for any game with an economic bent, but an entire half (arguably more than half) of this game is Zelda (and clearly Bastion) inspired combat – so the balance feels about right. Too much difficulty in the dungeon, you may lose the Stardew Valley / Harvest Moon crowd. Too many bills and numbers, you’re losing the Zelda folks.

Moonlighter’s specialness comes from how these two elements combine to become something pretty unique and wholly wonderful and endlessly playable. It doesn’t matter if the shop stuff is a little less robust because the loop of dungeon to shop to upgrade to dungeon is dangerously appealing. Plus, fingers crossed, the developers will continue to update the game with new features.

What’s weird is Moonlighter feels a little like a bait-and-switch. The trailer (see above) was a bittersweet elegy to lost hope and missed opportunities – and one final shot at greatness. It presented the story of a man who spent his life content with small pleasures and ignoring big dreams.

…Until he changes his mind and takes on one, final, adventure.

Moonlighter is very much *not* that story. In fact it’s not very story driven at all. But no bout a doubt it, it *is* the best game I’ve played this year. A combination of Zelda-style dungeon crawling with an economic back-end that rewards deep runs and big risks. All in the name of maximizing profits that allow you to re-invest into the town – which…is kinda beautiful when you think about it. Toss in that absolutely gorgeous 2D art, and you have a recipe for indie game gold.

What’s that worth to ya?

Full disclosure: This review is based on a Xbox One review copy of Moonlighter provided to HeyPoorPlayer by the publisher.