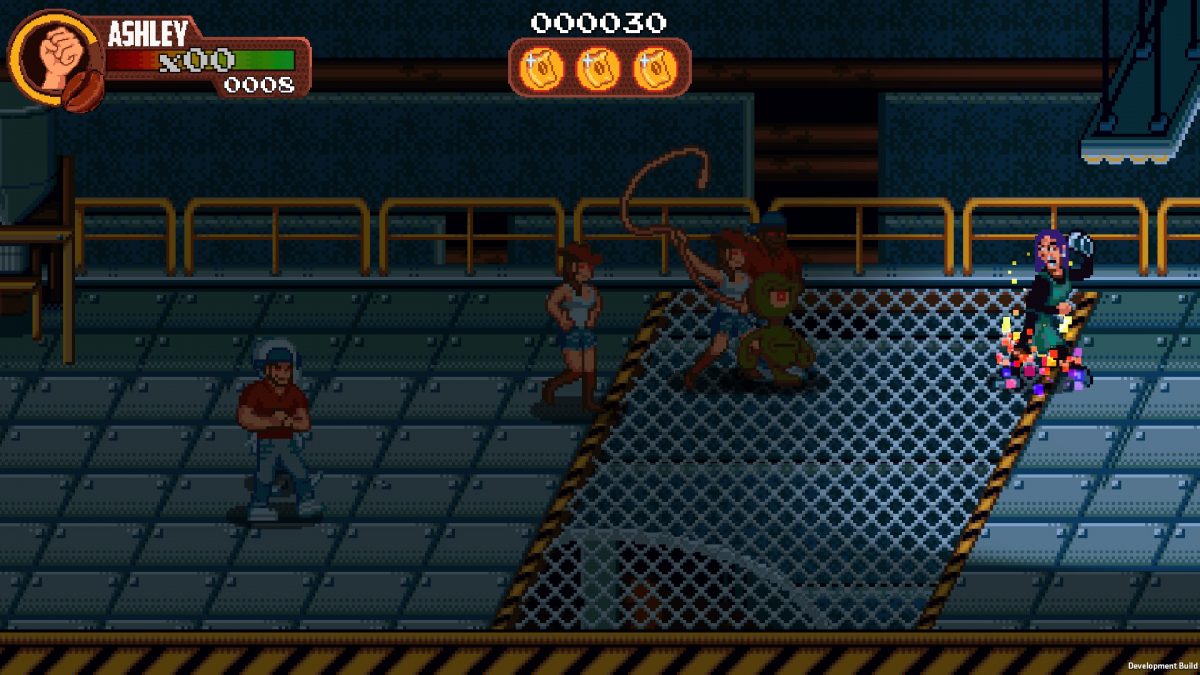 Beat-em’-up games are often self-defeating. Too many times a game like this comes out where the difficulty is too steep to overcome and frustration rears its ugly head. This mentality that these kinds of games need to be hard is rooted in their history in arcades, however these games were also designed to suck quarters out of your pockets. When I go to an Arcade Bar these days and experience games like Turtles in Time or The Simpsons set to Free Play, it can feel like a slog because of how often I’m dying and having unlimited continues flies in the face of any challenge the game could pose to me. Luckily Coffee Crisis from Mega Cat Studios manages to mostly avoid this, and provides a nice throwback feel to complement some solid gameplay.

The game puts you in the role of one of two baristas. Aliens have invaded and are holding hostage the Earth’s Wifi, cat videos, metal music, and coffee. The story is mostly barebones as you might imagine, but it doesn’t get in the way or feel like an overdose of references to pop-culture. There are 16-bit style cutscenes that give some flavor to the proceedings, but it’s mostly contrived stuff to allow for different themed levels like factories, other planets, and baseball stadiums. 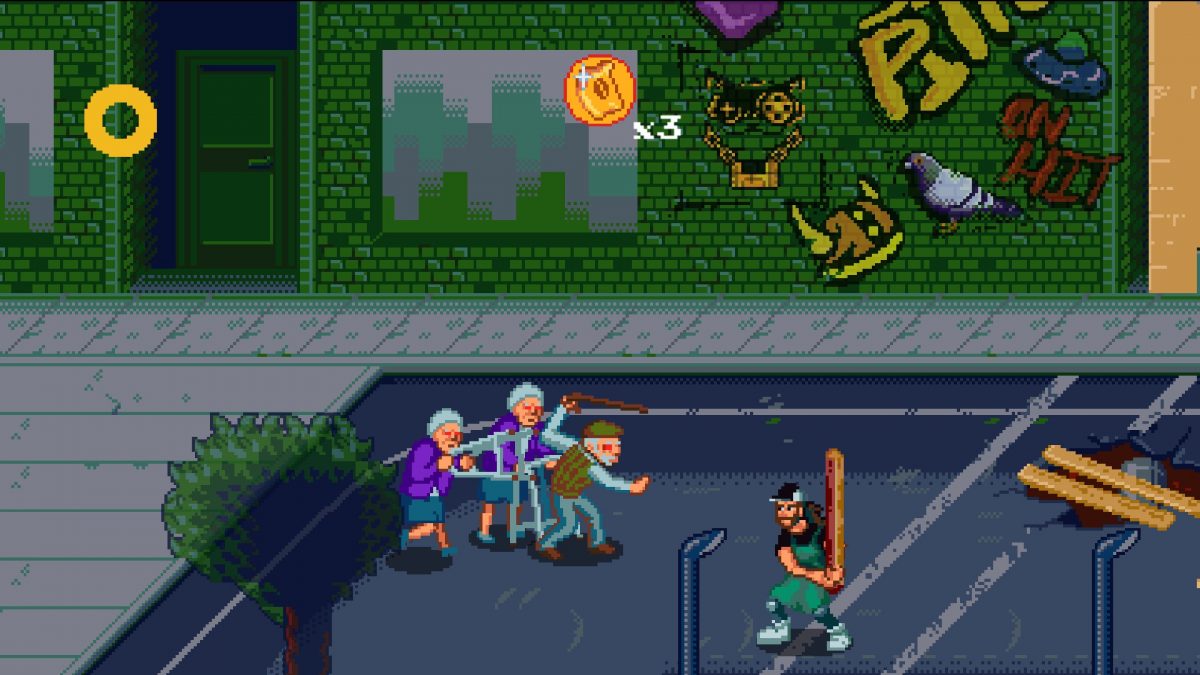 Gameplay is side-scrolling, but you can create space between you and enemies by walking to the left. While it seems like a small thing, this really lets the player breathe and didn’t make me feel constrained to the space of the screen. There are enemies that can really close the gap though so creating space to do a dive kick won’t always work. Your combat capabilities are dive-kicking, using various weapons, and doing some quick standing combo strikes. I really would’ve liked a dodge roll to better combat projectiles, but I could see why that might throw off the balance and simplicity of the game. Mega Cat did make a Genesis cartridge version of this game, after all. You can also hold down the strike button to perform a more powerful charge attack with longer reach, but I rarely used this since enemies can get fairly close before you’re able to unleash it. But it can come in handy a few times when enemies are lined up in a neat row before you.

Like Golden Axe and Streets of Rage before it, Coffee Crisis mainly consists of you trying to manage large groups of enemies and hop on power-ups immediately when they respawn. The player is also given a special attack, which is thankfully tied to a special meter rather than to the player’s health. It really feels like the designers made sure that they designed this game around survivability and challenge rather than tie themselves into a corner with nigh impossible difficulty that would only end up driving players away.

Another Beloved Entry in Crisis series 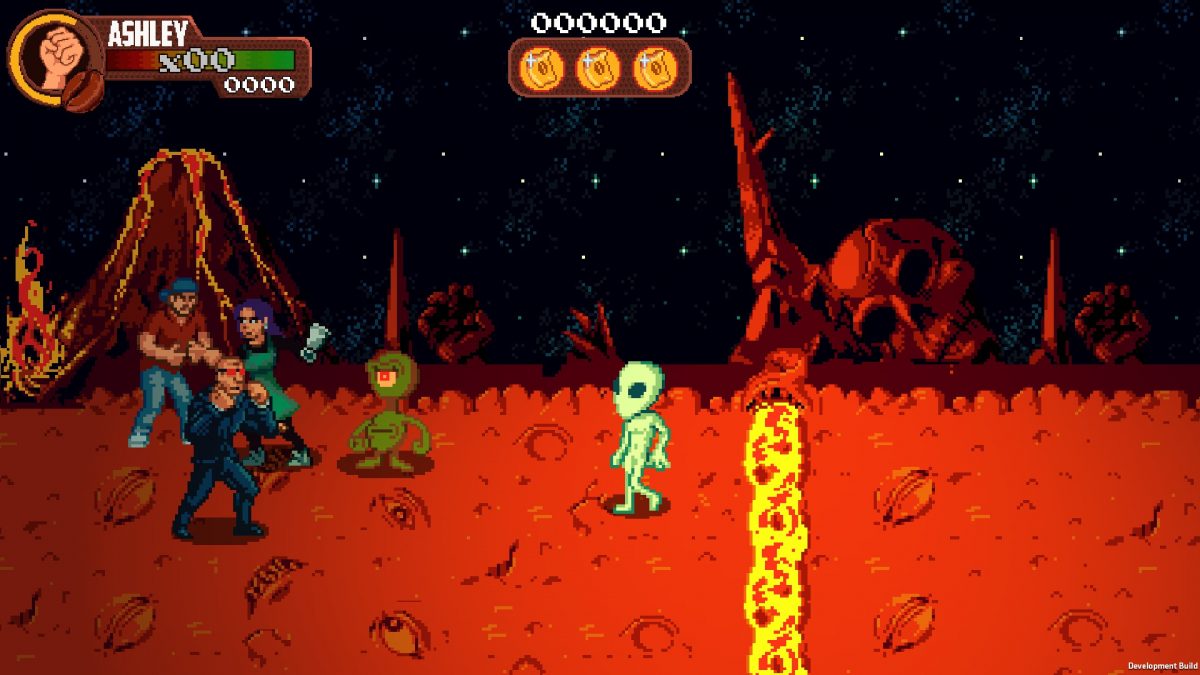 There are bosses for each level and each has a different range and attack pattern. These fights require a good amount of finesse as you’ll need to time your jumps and sidestep any projectiles from additional mobs. Luckily, the boss’s health bars are located directly above their heads. So there’s no need to take your eyes off them. I found most of these bosses to be manageable, but the number of mobs being thrown at you increases so drastically in the last two levels that it can get incredibly frustrating at times. You’ll feel like you’re in a bullet hell, and the controls just don’t feel responsive enough to quickly dodge multiple projectiles coming at you on the y-axis of movement.

The soundtrack of Coffee Crisis leaves something to be desired as well. Don’t get me wrong, I enjoy heavy metal, but the riffs here are just overwhelmingly average. They don’t really fit with the rest of the game’s tone. I would’ve rather had a synth-based soundtrack, even if it is a bit cliché for the genre. I just don’t really see how the stylistic choice to have a metal soundtrack contributes to the game’s aesthetic. The music actually distracts from it.

There also isn’t any online co-op play which really hampers replayability. Unless you have a setup that lets you play games on your TV, you probably won’t get much mileage beyond a single player playthrough of the game. I didn’t feel like I needed to come back after credits rolled. I unlocked a new difficulty level but that wasn’t enough.

Coffee Crisis is an enjoyable package for someone looking for a new side-scrolling brawler that feels designed around console sensibilities rather than those from its arcade peers. I ended up finding myself satisfied and impressed by the overall package. But the tight gameplay is really the only aspect of the game that I feel is what is particularly worthy of praise and special attention.  Which, at the end of the day, is kinda what it’s all about.

Full Disclosure: This review was based on a PC review copy of Coffee Crisis given to HeyPoorPlayer by the developer.