I Hate Running Backwards quite literally turns the shmup genre on its head. While other vertically-scrolling shooters tend to place the player at the bottom of the screen as they blast enemies and dodge waves of bullets coming from above, this game challenges players to put their best foot backwards as they charge ever away from hordes of murderous enemies as they emerge from below. This interesting change in direction isn’t the only thing that makes the game stand out from the pack, though.

Developed by Binx Interactive and published by Devolver Digital, I Hate Running Backwards isn’t just a straightforward shooter. It also manages to meld mechanics from roguelike and endless runner-style games to create a frantic and punishing experience unlike any other out there. 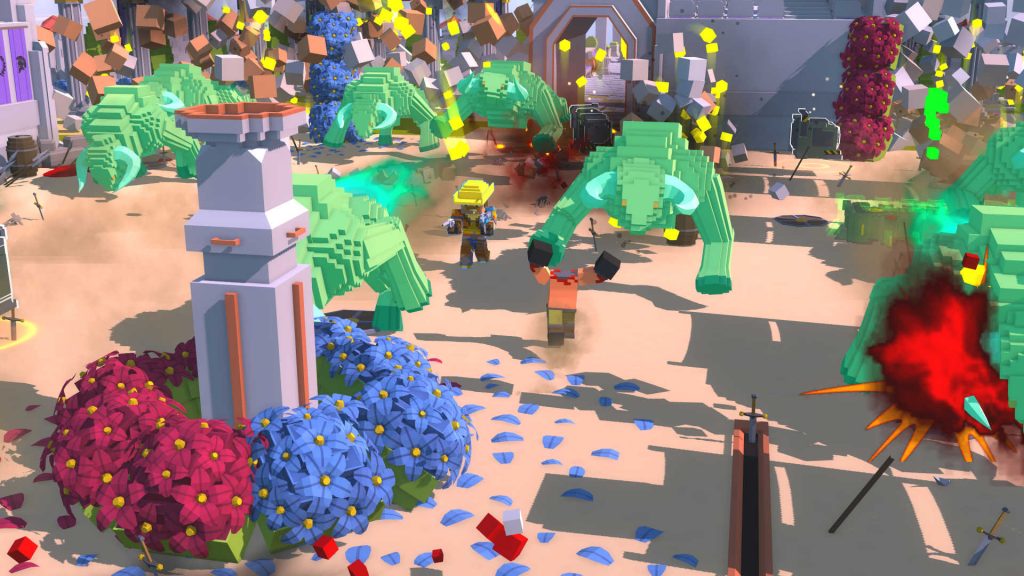 Trust me, you won’t want to run with these bulls.

The plot takes a backseat to the action in I Hate Running Backwards. There’s no real story to speak of here. Players take control of a number of heavily-armed heroes — many of whom are from other Devolver Digital published games — like Serious Sam, Lo Wang from Shadow Warrior, Bullet from Enter the Gungeon, Richard from Hotline Miami, and more as you blast your way through five stages including dusty deserts, verdant jungles, medieval ruins, and more. Each of the characters you unlock brings their own unique weapons, skills, and stats to the table too, which helps keep things interesting. For example, Dancing Denzell has less health than other players but can deftly weave in and out of bullets with his extra speed, while the burly Chux is slow but packs a chaingun that can reduce waves of enemies to twitching gristle.

No matter who you choose, you’re in for a brutal time because I Hate Running Backwards is nothing short of unforgiving. Death comes hard and fast in this bullet hell reverse decathlon, where just one mistake can toss you back to the game’s title screen thanks to its permadeath system. That’s right, you only get one chance to topple the five stages and their towering bosses. The odds, my friend, are not in your favor.

This relentless difficulty surely makes I Hate Running Backwards exhilarating at times. Weaving in and out of machine gun fire as you unleash a powerful Ultimate Attack on a boss is a real rush, and using your melee attack to swat incoming rockets back into the face of enemies never fails to satisfy. I really do love moments like this. But that excitement can be dulled quickly when dealing with the game’s more frustrating moments. Trust me when I say you’ll feel white-hot rage whenever an errant werebull or other stage-exclusive hazard bursts from a wall to deliver instant death. What’s even more maddening is just how easy it is to run backwards into an unseen red barrel while hugging the top of the screen only to be blown to bits. Moments like this are enough to make you want to dropkick your controller firmly into the drywall. 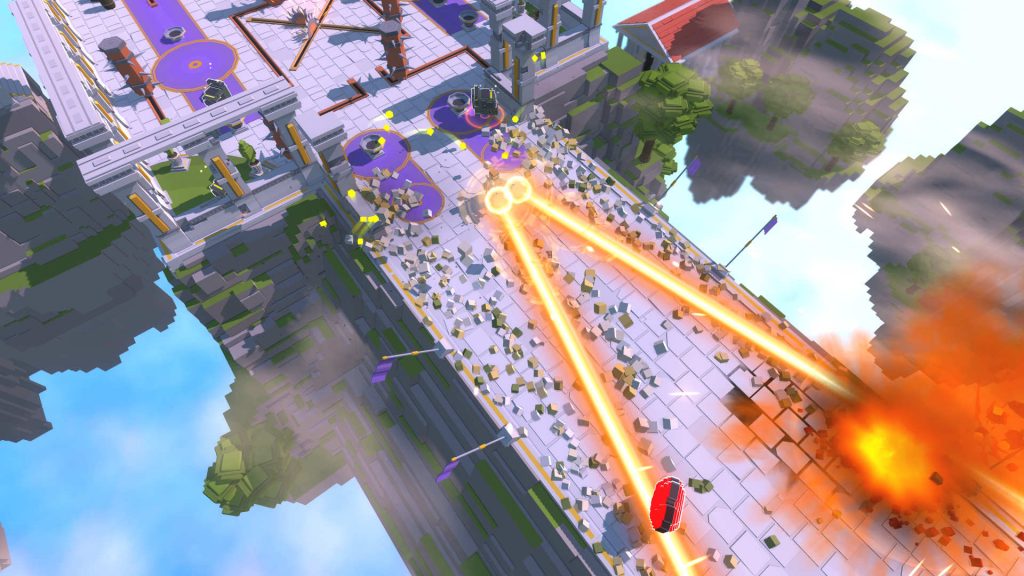 There are tons of weapons to unlock, each with their own strengths and weaknesses.

Thankfully, I Hate Running Backwards does do a few things to help level the playing field a bit. Blowing away enemies and blasting the environment to Kingdom Come awards you experience points. And, once you level up, you’ll be able to choose from one of three random perks to make your life easier. These perks can give you extra health, make your melee swing last longer, allow you to leech ammunition from the enemies you kill, and more. These bonuses can often mean the difference between life and death. That said, causing as much chaos as possible to amass experience is an absolute must.

If you find going it alone to be too tough, you can also enlist the help of a friend for some good, old-fashioned couch co-op. Having an extra triggerman at your side is a huge help – thanks in no small part to the ability to respawn after 30 seconds. It’s here that I Hate Backwards really shines, as bringing down massive bosses with a friend is one hell of a rush, and can make the more frustrating moments that plague the single-player mode – like your sudden, grisly demise at the hands of an unseen enemy – much easier to deal with, and sometimes downright comical.

I Hate Running Backwards also features the inclusion of daily events. These challenges can only be attempted once and offer their own unique requirements for completion. All told, they’re a pretty fun way to spice things up as you try to climb your way to the top of the online leaderboards. Only time will tell if this truly digs its hooks into the community, however. But it’s a cool mode nonetheless and a welcome addition to the game’s bullet-riddled package.

A Shoot ‘Em Up All Its Own 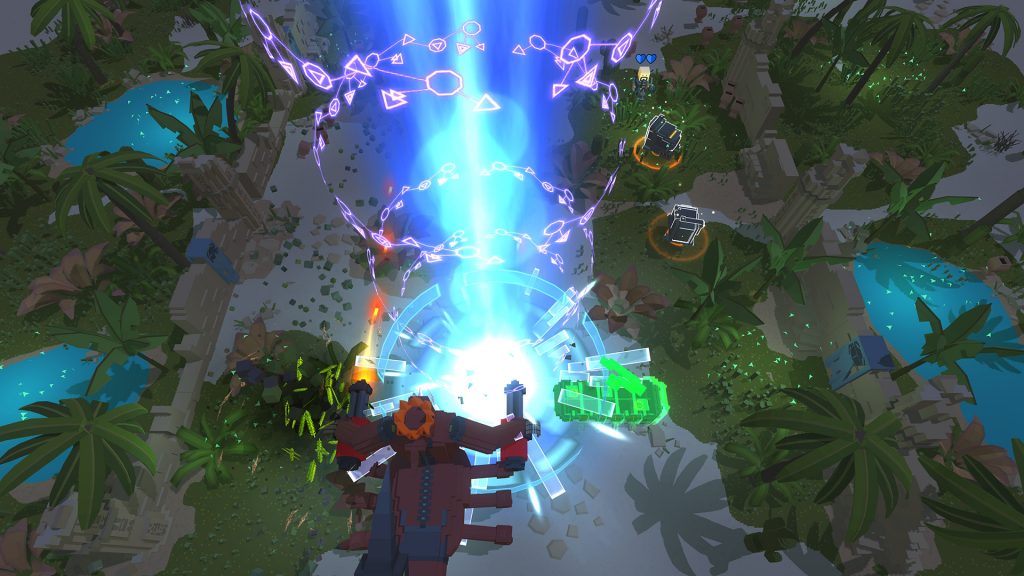 Bosses can turn you into a squiggly puddle of voxels in no time.

I’m a big fan of the shoot ’em up genre. It’s honestly pretty rare that I don’t have at least one up and running in my home arcade machines. That said, I have to admit that I Hate Running Backwards does some things that go directly against what makes for a quality shooter.

For starters, All of the best shmups out there are defined by their carefully choreographed enemy and bullet patterns that turn every stage and boss encounter into a hypnotizing bullet ballet. In stark contrast to that principle, I Hate Running Backwards is pure chaos. The stages, enemies, and power-ups are all procedurally generated. And, as you’d expect, this means those traits that shmup fans love so much are nowhere to be found. More often than not, success is less about memorizing boss and bullet patterns, and more about luck as you hope to uncover the best perks and power-ups before going toe-to-toe with each stage’s big nasty.

Still, if you can temper your expectations then you’ll find I Hate Running Backwards is full of charm. And that element of pure, unbridled chaos is exciting in a Binding of Isaac kind of way. Just don’t go in expecting a Cave or Psikyo-style production and you’ll be fine. Sure, I would have preferred more tightly-scripted stage designs. But there’s a constant element of surprise that keeps you on edge. One trip through a stage may have you wading in waist-high waters as you mow down hordes of baddies. The next may find you suddenly in the driver’s seat of a jeep as you race away from stampeding monsters. There’s never a dull moment.

Run For Your Life!

While it stumbles pretty frequently, I Hate Running Backwards does, perhaps ironically, take a few steps in the right direction. The treasure trove of unlockables is pretty awesome. And while the single-player mode can be exhausting, teaming up with a friend is certainly fun in short bursts. It’s just a shame that luck plays such a large part as to whether or not you’ll succeed. I’ve played countless sessions where I’m either swimming in extra ammo or there’s hardly any to be found. Likewise, I’ve had games where I’ve been showered with life-restoring hearts, only to have them be all but missing from the next sitting. This unpredictability is more frustrating than fun and really hurts the overall experience.

I Hate Running Backwards isn’t your average shooter. And to be fair, it doesn’t pretend to be. If you’re looking for a soul-crushing experience that will test your patience just as much as your skills, then this just might be the game for you. But if you’re looking for a more traditional, finely-tuned shoot ’em up, you’ll probably want to turn around and run in the other direction.

Full disclosure: This review is based on a PC review copy of I Hate Running Backwards given to HeyPoorPlayer by the developer.