Might as well face it you’re addicted to love 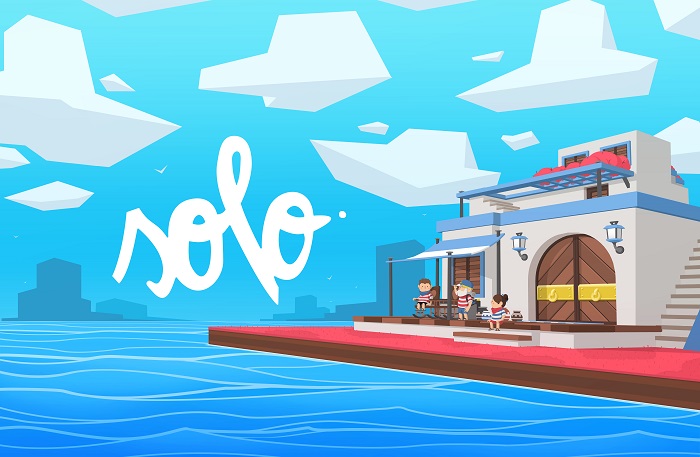 Solo is a single player puzzle game described by developer Team Gotham as an ‘introspective game about love’. Fundamentally, the game is an exercise in self-reflection, for those that are, have been, and plan to love again in the future.

The game asks you a series of questions, of which there is no right or wrong answer, to challenge what your idea of love is. You play as a sailor and can select your gender, age and who you’re attracted to. You aren’t limited to the usual male or female options, with Team Gotham including a non-binary option. 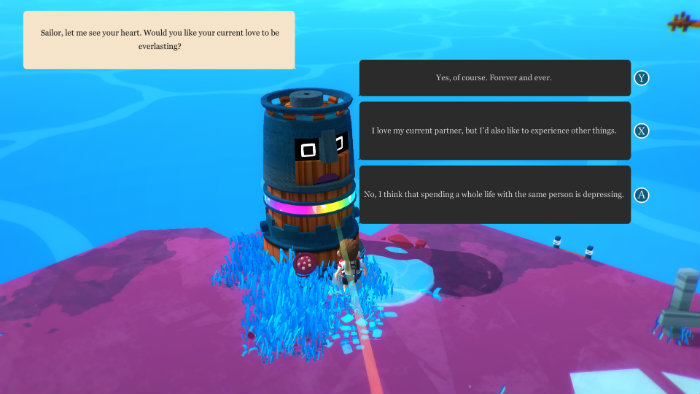 Quizzed by a talking totem

Solo relies on you being honest with yourself as you play through its charming, cartoony landscape. It’s actually quite a provocative game, asking you numerous deep and poignant questions about yourself, your relationship (if you are in one) and views on love in general.

For instance, right at the start of the game once you’ve gone through the usual process of picking your character and tweaking its characteristics, you’re immediately thrust into Solo’s rich and colourful world. You solve a short puzzle, involving moving around some blocks, to wake up a totem with a miniature lighthouse (yes, you heard me, a miniature lighthouse), who asks you a question.

The totem asks: ‘Sailor let me see your heart. Would you like your current love to be everlasting?’

Because I’m a soppy emotional wreck, I answered ‘Yes, of course, forever and ever’

About 30 seconds later, I’m confronted by this ghost – which is supposed to represent your lover – stating: ‘Do you think you’re deserving of everlasting love?’ Welp.

Solo is full of emotionally charged moments like this, where your answers to questions about love are immediately challenged. It questions everything that all the trashy rom-coms have ever told you – and that’s a good thing! 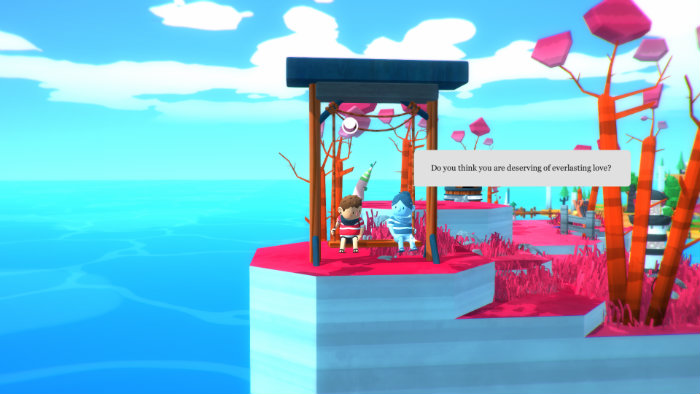 Being made to feel like crap by a virtual girlfriend ghost

Team Gotham must be given credit for the beautiful world they’ve created. Although it may draw comparisons to The Legend of Zelda: The Wind Waker, visually speaking, Solo is a beautifully charming game.

While the underlying premise of the game is quite cathartic in its nature, the simplistic and fun visuals are a welcome distraction from the emotionally taxing crux of the experience. As you progress, it is possible to play in black and white – but why someone would want to do that is beyond me – Solo is best enjoyed in all its colourful goodness.

It’s a similar story with the audio. Imagine a playlist of exceedingly non-offensive, elevator music and you’ve got Solo’s guitar led music, soothing you as you weep into your keyboard and mouse after an existential crisis about the true nature of love. Sob.

Thinking outside of the box 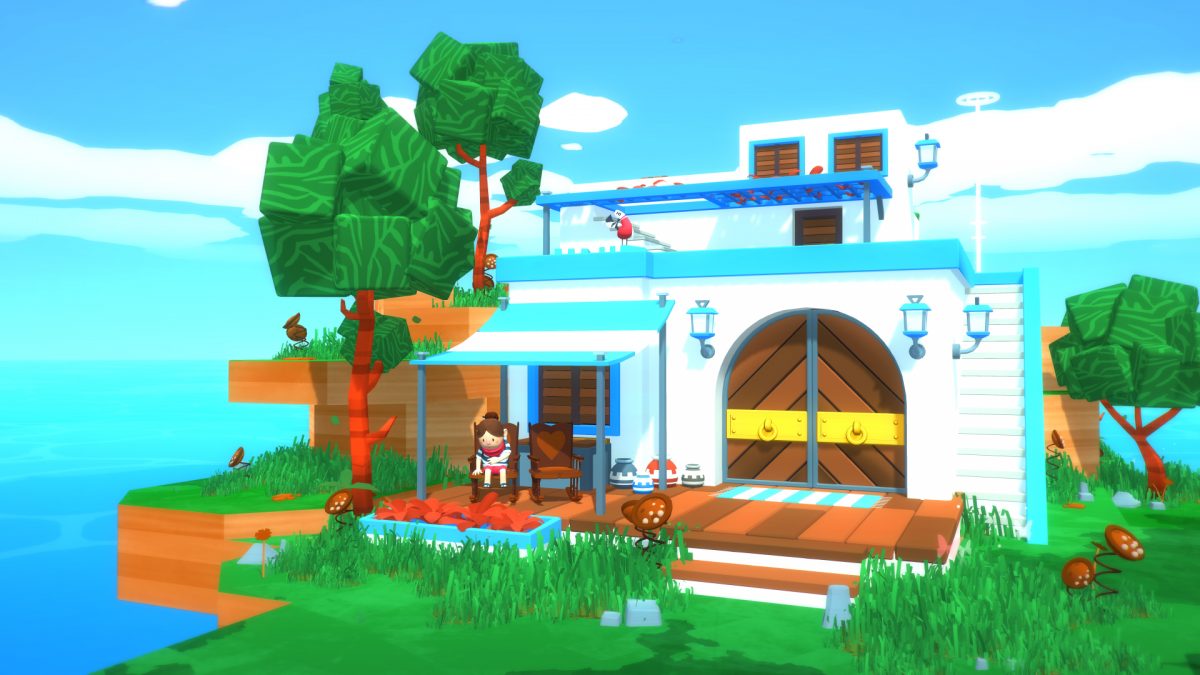 Light puzzling is on the agenda as you play through Solo. But they aren’t anything too strenuous, which balances out nicely with the serious decisions you make at the totems. Puzzles revolve around moving wooden boxes about the place, which becomes slightly more complicated as your progress, as new boxes, with extra features like built-in fans are introduced. You’ll also come across a wand that allows you to grab and place boxes without having to physically pick them up.

Solo’s puzzles are presented at the right pace offering a welcome distraction from the Spanish Inquisition of the totems. 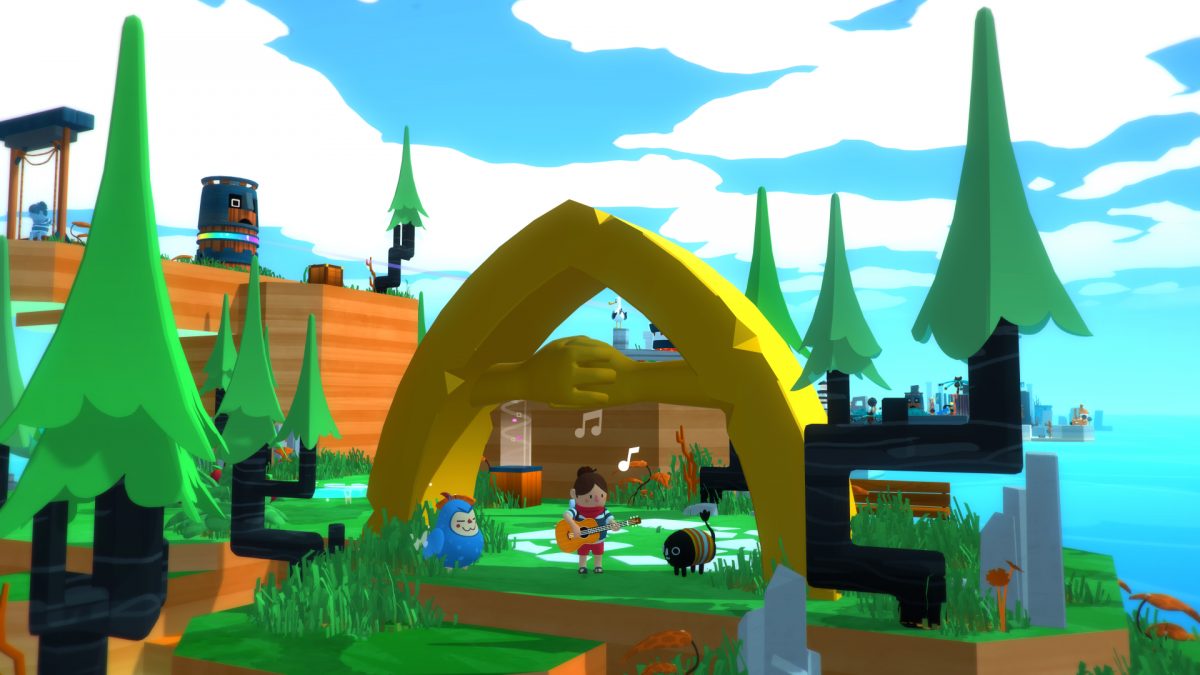 It’s not always this harmonious

In a slightly bizarre turn of events, as you progress, you’ll encounter lot of cartoony animals in differing states of distress. Some of them are looking for their long lost weird, sheep-bee thing, others just want a banana or some cheese, and others just want you to play some sick riffs on your guitar to make them happy. Either way, these little critters are a welcome change of pace from the serious nature of the game.

My theory behind their presence in the game is two-fold. Firstly, I think they’re there to help you reflect on the decisions you’ve made with totems. Secondly, especially when reuniting long lost sheep-bee things, it questions whether emotions like love are exclusive to just humans or whether animals can harbour those feelings too. 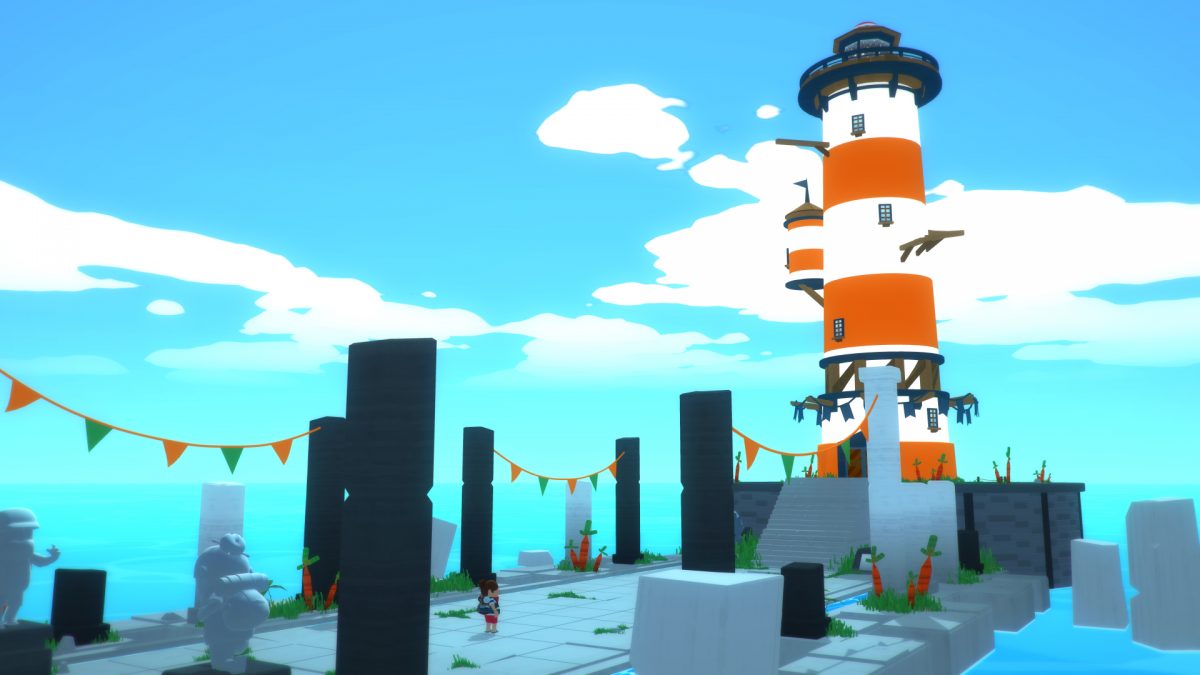 Unfortunately, Solo lets itself down with several frustrating bugs. Manipulating the camera can be cumbersome at best, as frequently, it fails to do what you need it to do – leaving you in a situation where you pretty much have to guess where you’re directing your character.

Moving boxes with the wand can be frustrating at times too. It doesn’t feel very intuitive and can be quite imprecise, often requiring multiple attempts to move objects where you’d like them to go.

But perhaps more seriously, as I was reviewing the game, I came across a game-breaking bug that inhibited my progress. Because Solo autosaves – and doesn’t have save slots like its contemporaries – I was left with no choice but to start the game from scratch to progress.

Solo is the type of game you should play if you enjoy interpretative gaming experiences. It lacks a coherent plot, any sort of direction, and encourages you to think about yourself, what you think about love and reflect on your own experiences.

Sometimes, some of the choices felt a bit too binary and came across as slightly heavy-handed. But overall, the game encouraged me to reflect deeply about myself and my own experience with love – and I must say, it isn’t often that a game grabs me in this way.

Despite the positives, issues with the camera and bugs made playing Solo frustrating. But I am hopeful Team Gotham will continue to support the development of the game post-launch.

Full disclosure: This review is based on a PC review copy of Solo given to HeyPoorPlayer by the publisher