The Land of Glass Review (PC)

As Classy As it is Glassy 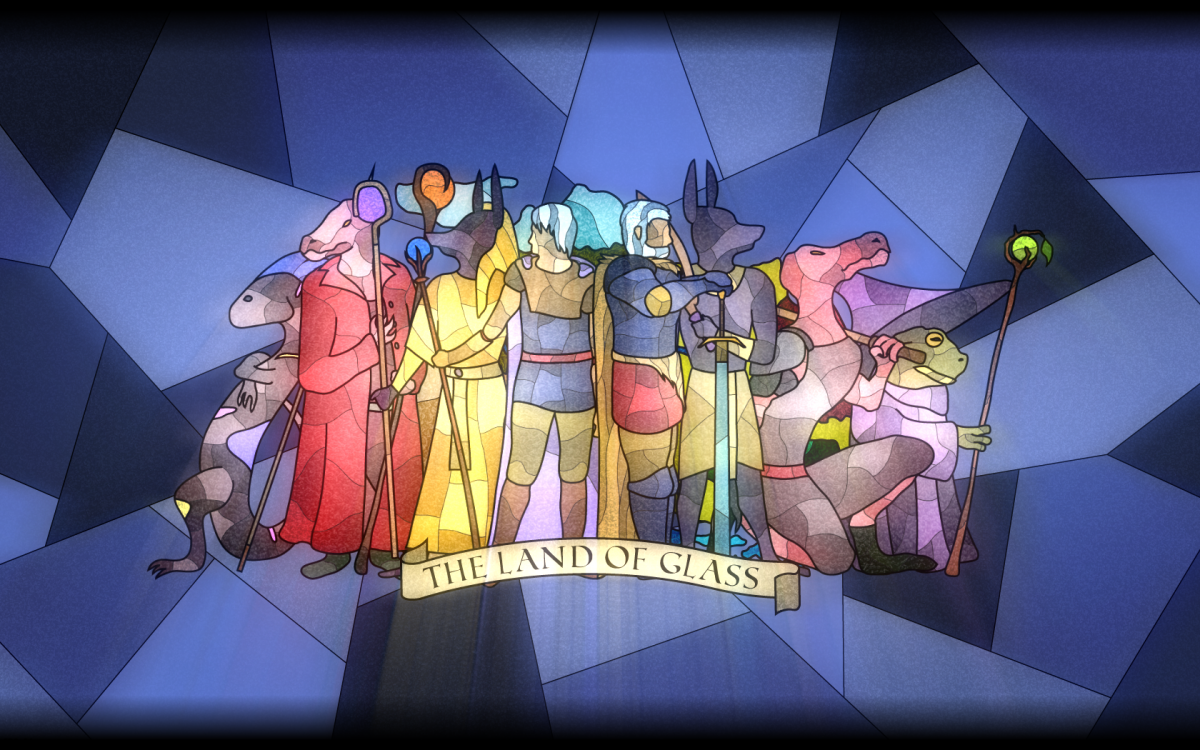 The thing about glass is that it can be beautiful, ornate and carefully constructed, yet it’s brittle and can shatter suddenly and dramatically. The Land of Glass really personifies this duality. It’s a card battler with beautiful scenery, that looks like a stained glass window in a cathedral. However, the battles can end quickly and suddenly, delivering the player punishing game over after game over, each time with a dramatic shattering sound.

The Land of Glass’ combat system is a rather masterful mix of a traditional card-battler with tic-tac-toe. Each battle presents you with an attack grid, a defense grid and a hand of cards which replenishes itself from your deck each time you play one. To attack, you place an attack card on an opponent’s defence grid and attempt to whittle down the defense score on each block. Once the defense score is reduced to zero, you’ll knock your adversary backwards, and closer to falling off the edge of each battle board. Oddly enough, the denizens of this world seem perfectly conditioned to being placed on platforms hovering over oblivion every time a fight is commenced! However, you’ll have to do the same card-playing on your own defense deck, using defense cards to restore the values of your own grid. 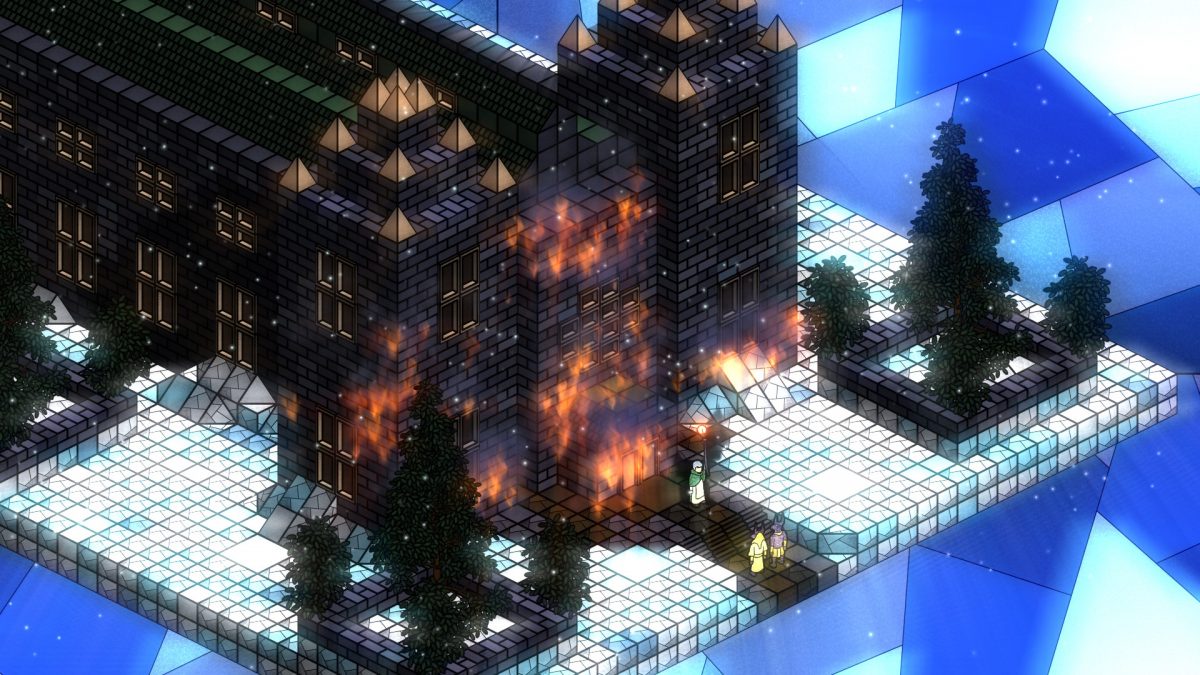 Cards from the abilities deck really add spice to the encounters. For example, you can play an “ice” spell, which causes an area of slippery ice to appear, making any foes on top skid dramatically farther backwards when they receive a hit. It’s profoundly satisfying when you catch multiple foes within the area of effect, like when you lay down a sludge spell to encase approaching shadow demons in slime, making them stop short while you’re teetering on the edge of toppling.

What makes The Land of Glass’ combat system particularly akin to tic-tac-toe on steroids is how you’ll later find attack and defense cards that mitigate/cause damage across a line on the grid, making it particularly important to plan things in advance to stop/create large areas of vulnerability opening up. When you play an attack or defense card on the grid, there’s a cooldown before you can use a similar card, and a cooldown before you can play the same card on the same block.

When you’re monitoring the cooldowns for attack, defense and ability cards, it can become incredibly frantic. Handily, time slows down when you’re about to play your card, which will allow you to catch a hole in your adversaries’ defense grid. Playing high a damage attack card just at the right moment will send them flying off into nothingness with a satisfyingly loud shattering sound. But you can’t just play for position. Each combatant also has a stamina bar, which determines how my fighting power they’ve got left. Deploying cards like “fire” can drain your opponent’s stamina, wearying them down with attrition if you’re finding it hard to find a hole in their defenses. But since the same can happen to you, it’s highly important to keep some healing cards in your deck, while still balancing them with offensive abilities so you never find a hand that’s too full of one type of card or another.

The way each decision is pivotal, and punctuated powerfully, means no battle ever feels like just another grindy “random encounter”. Every fight is a desperate conflict for survival where a single poor choice can send one fighter careening off the ledge into oblivion.

The Windows Tell a Story 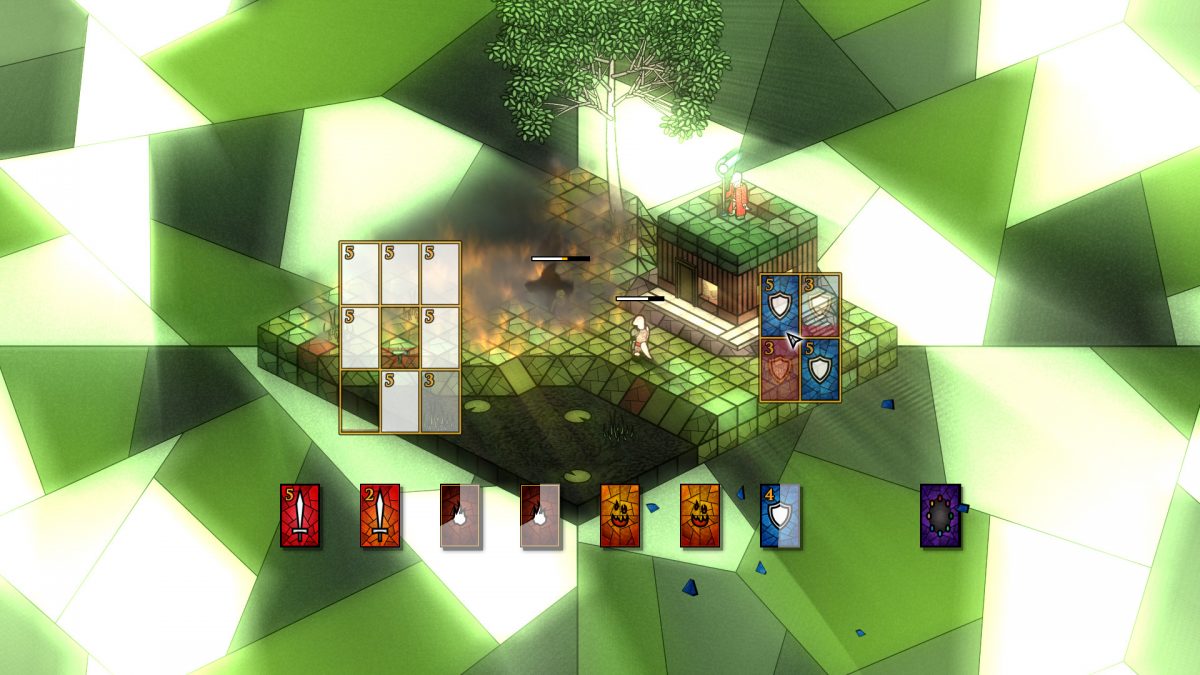 What really took me aback was just how good The Land of Glass story is. The first campaign casts the player as a warrior/blacksmith named Kvalt of the reptilian people named the Drax. It starts, as many adventures do, in the local tavern where Kvalt is drowning his sorrows with his best friend, the wizard Tylek. Dramatically, their home city is overwhelmed with monsters created by the folly of the secretive “guild”. Kvalt is immediately embittered by how his wife and children are killed by the calamity in a very dramatic way, becoming consumed with nihilism and rage, determined to kill every demon in the land and anyone else who stands in his path. Rather than this being your standard Liam Neeson action revenge story affair though,  The Land of Glass gives a much more thoughtful treatment to themes of overcoming the anger and despair engendered by loss. The snappily written exchanges between the more ponderous Tylek and Kvalt’s plain-spoken grouchiness as they try and grapple with their situation really makes completing each stage more compelling than simply being a series of battle arenas.

The story is perfectly mirrored by the idosyncratic presentation. The Land of Glass’ wonderful world is rendered in the modular/block-based style of Minecraft – if everything was made of smooth glass. Characters are presented as smooth, rounded shapes without features and as stained glass window portraits. From snowy castles to the swampy homelands of the reclusive frogmen – it’s really a sight to behold as each glassy block combobulates into a landscape every time a new screen loads in.

There’s a Stain on the Stained Glass 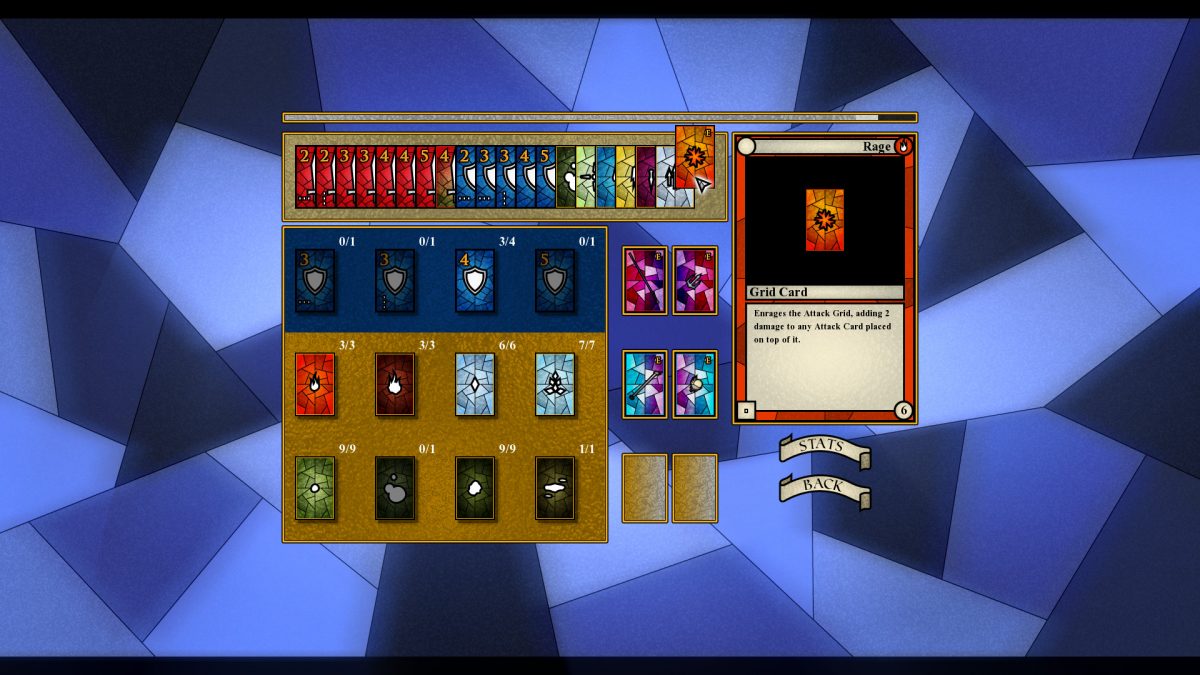 There are some balancing and usability niggles. For example, the way equipment progression works is incredibly linear, much like a JRPG circa the late eighties or nineties: from bronze sword to silver sword to gold sword. Rather than making more complex choices about how to equip your character for certain situations, you simply equip the next most stat-boosting item (and often just use obselete weapons in crafting recipies). This is particularly true with the weapons you find, but although you’ll find gems which boost different magical attributes, it’s pretty clear the best choice is what boosts your overall stats the most.

This linear equipment progression is particularly disappointing with how complex and modular building your card deck can be. Though you might have to do a spot of optimization of your deck before battles to defeat particular foes, it’s never an issue for equipment, and this underlines how the depth of The Land of Glass is limited. Likewise, movement in battles is restricted to automatically moving forwards and backwards with the flow of combat, which often makes area of effect spells feel a bit boring to cast sometimes. Since your enemies are only moving forwards and backwards, and you won’t encounter more than three at a time, it can get very predictable, and almost redundant aiming them.

Also, there are other UI problems like how you can only scroll through your inventory with a mouse wheel rather than clicking and dragging (which is a bit of a bother for those of us whose mousewheels have grown stubborn over the ravages of the years).

The Land of Glass stands out from the crowd with its uniquely ornate visual style, a punishingly fast-paced, blisteringly fast combat system and a surprisingly deep story. This is a pane of glass that’s not completely polished, but the dirty stains of UI niggles and somewhat limited complexity only tarnish the beauty underneath rather than hide it. If you want something that will shatter (pun intended) your perceptions of what card battling games can be –  The Land of Glass is it.

Full disclosure: This review is based on a PC copy provided to Hey Poor Player by the publisher.

The Centennial Case: A Shijima Story Review: A Murder Mystery 100 Years in the Making Things were going well for Haruka Kagami; a mystery novelist with a Hercule Poirot…