The most traumatic wedding crash ever? 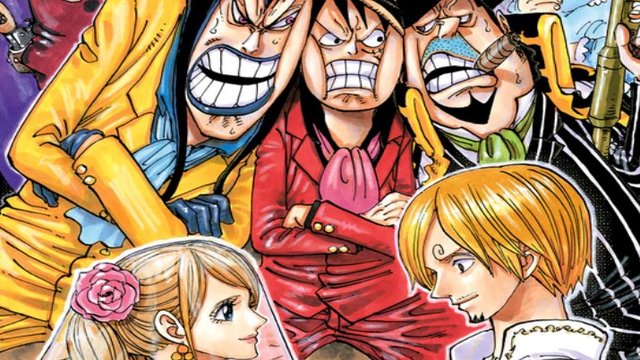 The very best One Piece flashbacks aren’t merely the ones that make us cry, but those so emotionally numbing their memory lingers well after reading. Not that the Chopper and Robin tearjerkers weren’t depressing in themselves, but I think of, say, Dressrosa’s one-two-three stomach-punches in the form of Law’s, Senor Pink’s and Kyros’s flashbacks, all which left me reeling with an “oof, that’s just rough” melancholy. Heck, even with the flack Fishman Island’s infamous flashback gets, discovering why the Neptune Brothers laced singing into every-day speech remains one of the series’ most poignant character moments.

And now, that bitter pill is swallowed again in volume 86 of One Piece via Charlotte “Big Mom” Linlin, the monstrous emperor Luffy battles in the Whole Cake Island arc. Naturally, such a larger-than-life figure must have a momentous history to match, and with Whole Cake finally (finally!) put behind us in the weekly chapters, I can say with full confidence it’s the arc’s sharpest instance of storytelling. Upon the initial success of Luffy and Capone Bege’s wedding-crashing plan to paralyze Big Mom, the shattering of a precious artifact segues into a two-and-a-half-chapter flashback featuring her childhood: abandoned by her parents at the Giants’ homeland of Elbaph due to her destructive nature, she’s taken in by Mother Carmel, a holy woman who runs an orphanage. No matter how much Linlin rampages, Carmel forgives and rewards her, culminating into a special birthday party brimming with semla, her favorite treat…

What happens next – or rather, what’s implied next – is something so horrifying that I can only imagine Shonen Jump restrictions prevented Eiichiro Oda from fully expounding upon Linlin’s, um, “accident”. I say this despite the presence of another popular ongoing series dealing with a similar subject matter, but Oda’s cartoonish artstyle and the narration describing it as a “truly wonderful birthday” – like the rest of Whole Cake Island, it reads like a demented fairy tale — perhaps renders it even more nightmarish than that manga. I know I’m being purposefully vague, but in a comic where we’ve witnessed the likes of child soldiers, government-sponsored genocide, implied sexual abuse, slave trades and psychotic defense mechanisms, this one incident eclipses them all as being the grimmest story ever told in One Piece.

A terrifying woman who never grew up. 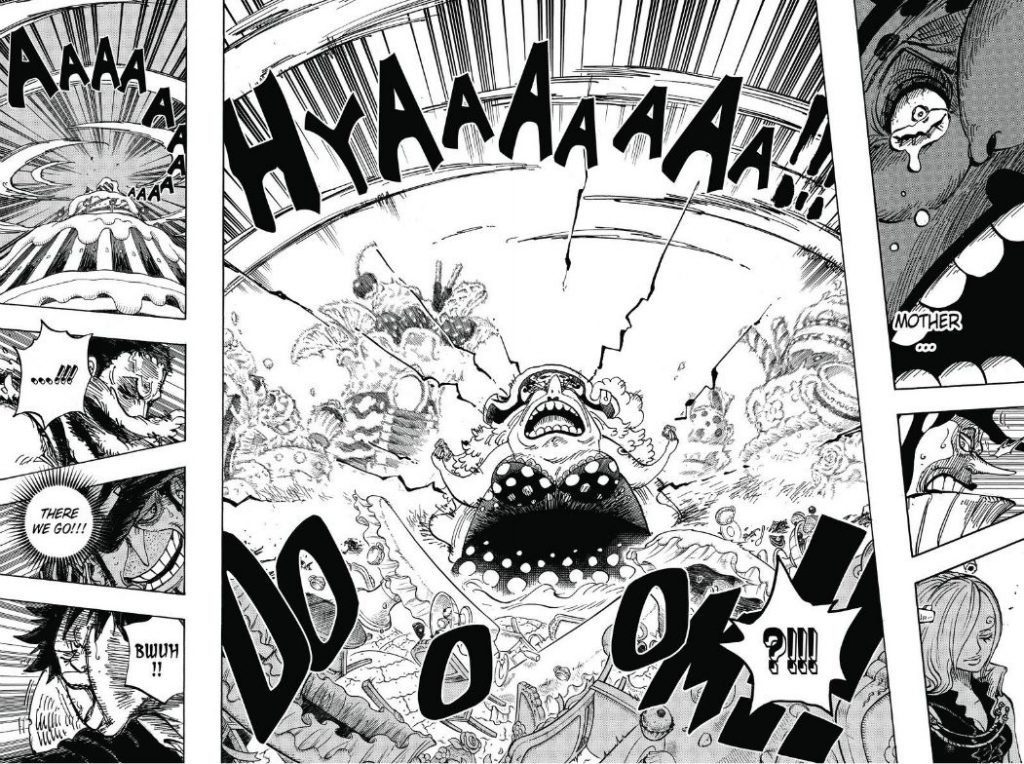 But through it, and what happens after the fact, we recognize why Big Mom is the way she is. Without the guidance of people who truly loved her, her aim of a righteous goal (uniting the world’s races) is only possible through terribly self-centered means (terrorizing the world to stave off her hunger). Not every One Piece villain deserves, or even needs, to be humanized – as we saw with Doflamingo, some people are just born sociopaths – but Big Mom’s selfless dreams presented a bizarre juxtaposition to her villainy; combined with her obviously being  mentally unwell, and it’s enough to compel any reader to ask what makers her tick. Furthermore, Oda’s careful framing of the incident as a mystery paves the way, in typical One Piece fashion, for tie-ins into future arcs — surely the Straw Hats’ giant friends in Hajrudin, Oimo and Kashii could shed some light?

However, let’s not forget what else goes on in Volume 86: there’s the moment of Sanji and Pudding’s faux-wedding, for starters, and while Pudding’s “about-face” may’ve been inevitable, the volume leaving her in shock makes for an enticing hook on her future contributions. Meanwhile, Jimbei standing up to Big Mom also makes for a powerful chapter closer: for years, we have known would eventually join the Straw Hats, and for him to finally undo the shackles binding him to Big Mom is a liberating moment not merely for Jimbei, but for us readers as well (Also, Brook gets the volume’s biggest laugh, but I dare not spoil his antics here).

Art-wise, we witness Oda’s imagination running at all cylinders, namely in Bege’s transformation into a walking, talking fortress and Germa 66’s Super Sentai-inspired costumes (complete with theme song!). As expected from Oda, we’re still being introduced to new characters at a rapid-fire rate, and while several instantly leave a strong first impression (Charlotte Katakuri, the most powerful of Big Mom’s children to the extent where he can gaze into the future), it’s a tad frustrating in an arc where we must juggle faces and names between all the different Charlottes. (Thankfully, the guests to Big Mom’s Tea Party are much easier to differentiate, namely Morgans the avian journalist, whom I’m fascinated with solely on the grounds he’s Oda’s possible take on a devious Big Bird)

Alas, we’ve already reached the peak of Whole Cake Island; as we’ll discuss in the next couple volumes, what awaits us is a whirlwind of ideas crippled by some of Oda’s worst habits. But we’ll get to that when it comes; for now, let us savor this one moment in knowing that amid all the crowded fight scenes, chapter cover stories, and balancing of character use, Oda still knows how to twist that storytelling knife. Oh, it still stings!