A  Back-alley Brawl That Misses The Mark

If there’s one thing I love, it’s side-scrolling beat ’em ups. It’s not a secret. I’ve been proudly proclaiming my fondness for the genre that Double Dragon built from the top of the mountain that is Hey Poor Player for nearly a decade now. So, when indie studio MakinGames and publisher Team17 first unveiled Raging Justice, a brawler heavily inspired by such genre heavyweights as Final Fight and Streets of Rage, you better believe I was more than a little excited to get my hands on the game. After all, there’s nothing quite as satisfying as teaming up with a friend to deliver brutal vigilante justice against waves of murderous street punks as you crack skulls with lead pipes and smash phone booths in search of that succulent, life-sustaining street turkey.

Taking it to the Streets 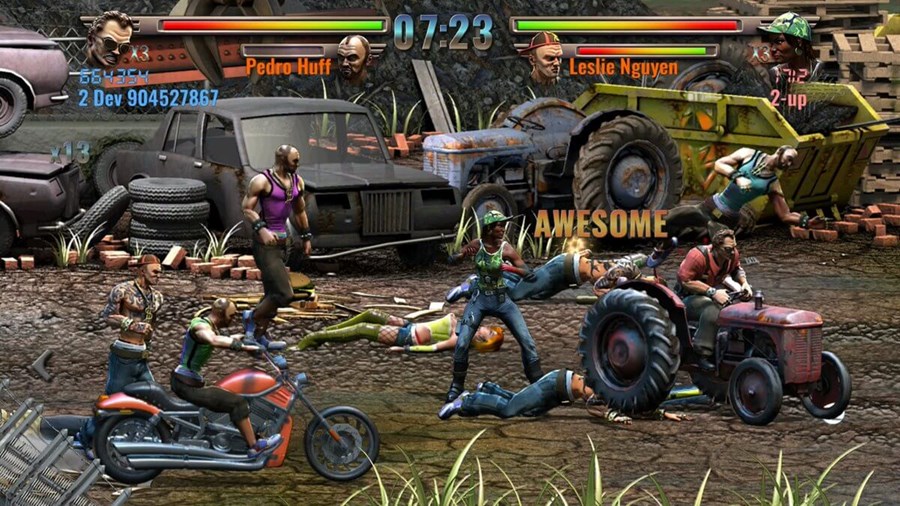 Plowing over goons with lawn mowers and tractors never gets old.

The story here is simple. The Mayor of Big Smoke City has been kidnapped by an evil gang of criminals. Now, it’s up to three seasoned brawlers to take on the violent syndicate and rescue him before it’s too late. Each character has their own fighting style that makes them better suited for certain situations. Rick, for example, is an old-school cop that fights dirty, delivering a solid balance of speed and damage. The fearsome ex-soldier Nikki is an ex-soldier Nikki is slower than Rick. However, she packs the most stopping power. Lastly, 15-year-old street fighter Ash may not hit as hard as the rest of the team, but he strikes with lethal speed.

If you’ve played a beat ’em up before, you’ll feel right at home here as you punch, kick, and bodyslam waves of goons in various urban environments like graffiti-filled ghettoes and hazard-filled construction sites. The controls are easy enough to master, with the face buttons allowing you to execute punches, kicks, jumps, and grabs. It’s all straightforward, by-the-numbers stuff. However, Raging Justice does do something a bit unique by allowing you to arrest dizzied baddies. Arresting enemies always rewards you with a health power-up, which certainly comes in handy as Raging Justice delivers one hell of a challenge, even when played on its default difficulty setting. 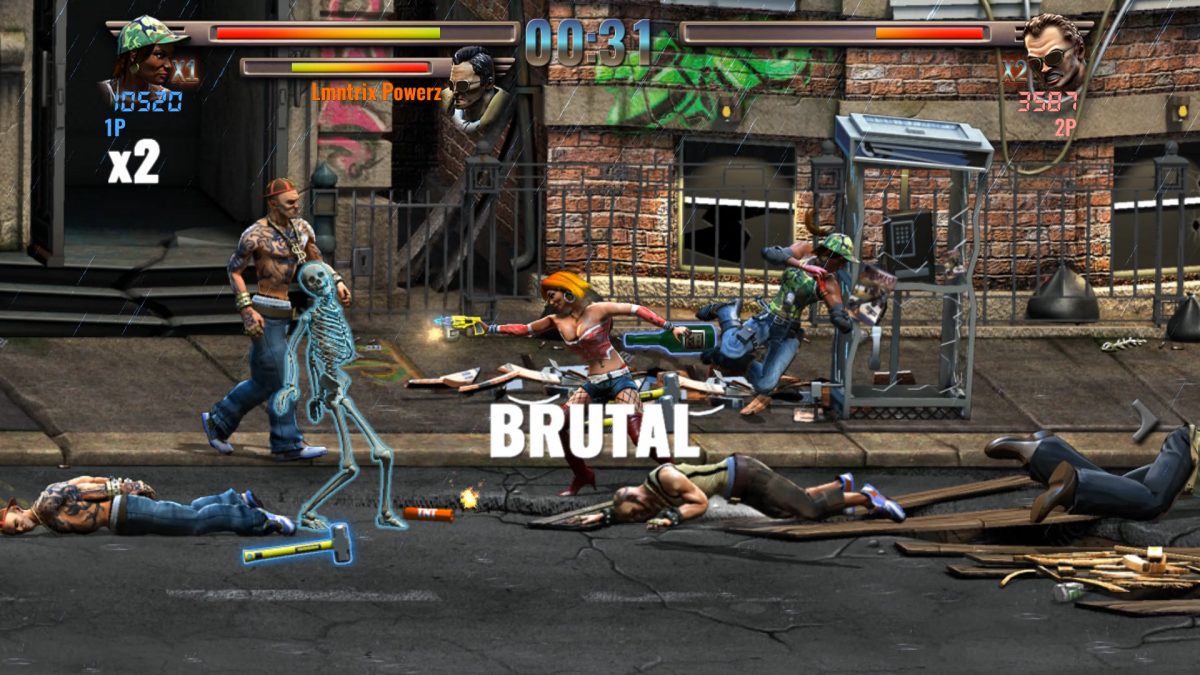 This leads me to one of Raging Justice’s biggest issues – the game’s lopsided difficulty. I love a solid challenge when it’s done right. However, the difficulty here stems more from a lack of proper balancing than anything else. Enemies can juggle you indefinitely with projectiles from the edge of the screen – and will do so pretty often over the course of the campaign. When fighting gangs of foes, it’s not uncommon to lose control of your character for a long period as you’re pummeled and bounced around the screen with little recourse.

To make matters worse, even the most basic hoodlum can break your combos right out the gate, leaving you open for a bruising. And don’t get me started on the dogs! These four-legged foes an only be dispatched with a kick or explosives. This means you’ll frequently have to toss away whichever weapon you’re holding whenever they appear so that you can kick them away before they latch onto your legs and leave you defenseless.

While all of these issues are frustrating enough, bosses are by far the worst offenders in Raging Justice. Most of them can only be attacked during a very short window of time before they begin a phase of invulnerability – often while being assisted by limitless waves of reinforcements. There were a few occasions where this caused a boss encounter to last longer than the stage itself. Suffice it to say, moments like this turn what could be an otherwise entertaining brawler into a repetitive slog. This is a shame, too. Because there are times when Raging Justice can be quite fun. Running over punks with a riding mower or splattering them against a wall with a swing of a baseball bat is super satisfying. But these flashes of joy are short-lived when the game’s otherwise unpolished elements throw an unwelcome wrench into the machinery. 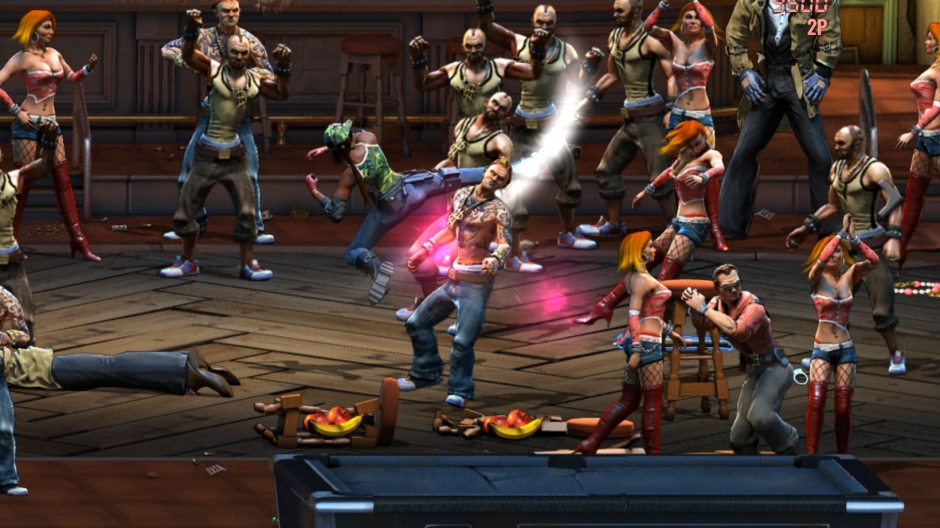 What beat ’em up would be complete without a raging bar fight?

When it comes to presentation, Raging Justice doesn’t try to hide the fact its roots are firmly planted in the golden era of the beat ’em up genre. Sure, plenty of retro-inspired titles wear their inspiration proudly on their sleeves. But in this case, it’s been done to the point of parody. Everything – from the hulking pre-rendered sprites that were first popularized in the twilight hour of the 16-bit era, to the massive words like “Extreme!” and “Brutal!” that splash across the screen when you pummel your foes with a baseball bat or samurai sword, pack all of the subtlety of a lead pipe to the base of the skull.

While the Clayfighter-esque sprites look decent as screenshots, in motion things fall apart. The animations are awkward and choppy and lack any sense of fluidity – almost as if they were stop-motion models. It’s seriously like watching the props from a Tool video come to life to engage in a drunken brawl. Only instead of being accompanied by face-rocking tunes like Schism or Sober, each bout unfolds to music left on the cutting room floor of Action 52. It’s enough to make Yuzo Koshiro cry.

You can almost imagine Raging Justice’s development was the byproduct of some dark seance where husband and wife developers Nic and Anna Makin painted a neon pentagram on the floor of their studio and lined it with cans Surge, slap bracelets, and Starter jackets and lit them ablaze in hopes of summoning the spirit of the ’90s. The end result, sadly, feels more like a caricature of the era that that inspired the game, rather than a sincere act of homage.

If you can overcome the challenge, Raging Justice is a quick burn. Plowing through the game’s campaign can be done in about an hour. However, each mission does have a wealth of challenges to complete –  challenging challenges – that could keep completionists coming back for more. There’s also an additional Brawl mode which allows you to choose a fighter to beat back waves after wave of baddies.

As a lifelong fan of the beat ’em up genre, I really wanted to like Raging Justice. It’s a shame the game just misses the mark in so many areas because with a bit more polish and refinement it could have been a really solid cooperative brawler. Unfortunately, the uneven production values and sloppy mechanics keep it from rising above mediocrity.  The final result is a game that shows flashes of promise punctuated by long stretches of frustration.

In the end, Raging Justice proves that catering to nostalgia alone isn’t a recipe for surefire success. Still, if you’re absolutely starved for a beat ’em up and have already had your fill of Dragon’s Crown Pro or Streets of Red: Devil’s Dare Deluxe, you might find an afternoon’s worth of fun to be had. Just know that there are much better alternatives available.

Full disclosure: This review is based on a Nintendo Switch review copy of Raging Justice given to HeyPoorPlayer by the publisher. 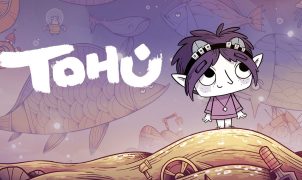