When it first released back in 2013, Dragon’s Crown was quite the treat. Developed by Odin Sphere and Muramasa developer Vanillaware, the game delivered an irresistible fusion of old school beat ’em up and RPG mechanics combined with a striking hand-drawn art style that made it one of the most memorable brawlers on the PlayStation 3 and Vita. Now, five years later, players are once again invited to explore the fantasy realm of Hydeland with Dragon’s Crown Pro. Featuring a breathtaking 4K upgrade, this remaster is certainly the prettiest version of the game on the market. But is that enough to entice veteran adventurers to return to its war-torn realm in search of fame and glory?

Honestly? Probably not. To be completely honest, Dragon’s Crown Pro offers very little in the way of new features apart from its aforementioned bump in resolution and the welcome addition of a fully orchestral soundtrack. Don’t get me wrong: those are nice additions. However, by and large, this is the same fantasy slugfest we experienced five years ago, albeit a bit prettier. Funny enough, the overhauled visuals are a bit less noticeable than they typically are in other modern remasters this time around, mainly because the original Dragon’s Crown still looks so impressive to this day. Still, while it may not have enough bells and whistles to warrant dropping down the $50 if you already own the PlayStation 3 or Vita versions of the game, Dragon’s Crown Pro is still hugely entertaining, and well worth the price of admission for those new to the franchise. 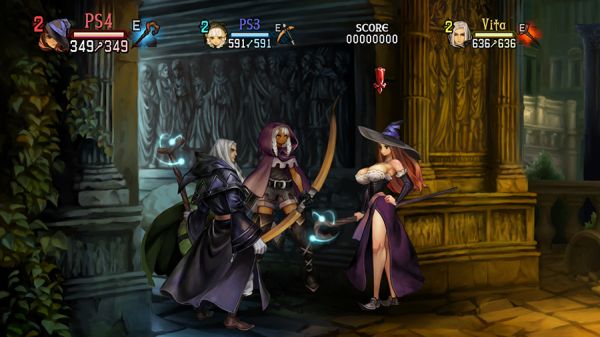 The best offense is a well-balanced team in Dragon’s Crown Pro.

In case you’re new to Dragon’s Crown, here’s the premise. The story is set against the backdrop of the war-ravaged kingdom Hydeland. After the king goes missing, you (and up to three friends) are thrust into an adventure to uncover his whereabouts and seek out the Dragon’s Crown – an ancient relic said to give whoever wields it the ability to control dragons – before an ancient dragon can lay waste to the kingdom. To do so, you’ll choose from one of six character types, including mighty fighters, bow-wielding elves, spell-slinging wizards and sorceresses, and burly dwarves and Amazons as you explore a variety of deadly locales, tackling massive bosses, hoarding loot, and ultimately, saving the land.

it’s a familiar formula – especially for those who’ve played Capcom’s Dungeons & Dragons brawlers such as Tower of Doom and Shadow Over Mystara. There’s a reason for that, though. Dragon’s Crown is the product of George Kamitani, who happened to work on those titles back in the golden days of arcade gaming. But it’s more nod to a bygone era. The game takes the novel ideas that made those epics shine, such as the loot and leveling systems and abundance of hidden areas in each stage and fleshes them out tremendously. The end result is a sprawling epic that is anything but a mindless button masher. There are dozens of quests to undertake numerous routes to tread. Hell, there’s even a pretty involved skill tree that allows you to customize each of the game’s six character classes to your liking. Like I said, this is one seriously beefy brawler. 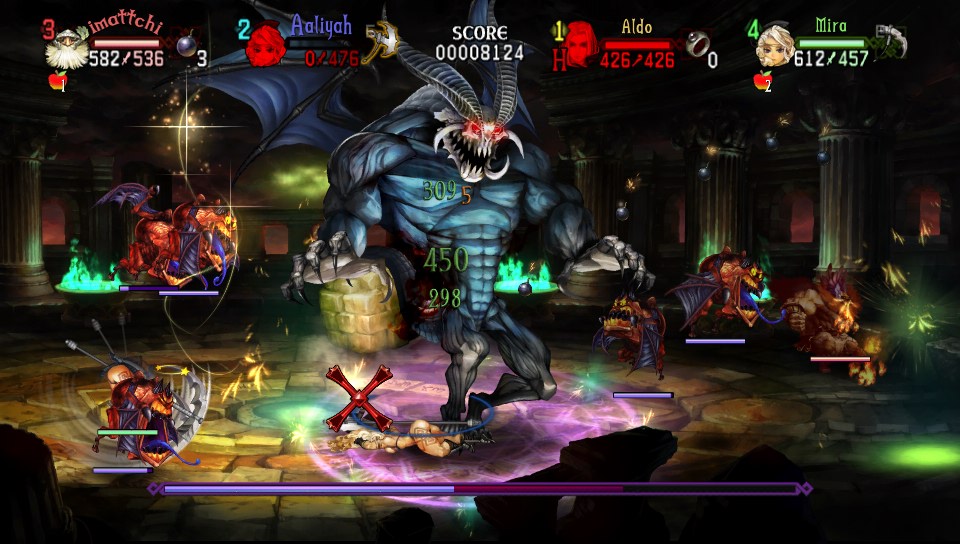 While early bosses start out simple enough, late-game foes require both brains and brawn if you hope to survive.

With so much to do and a bestiary of baddies to conquer, you won’t make it far on your own. Thankfully, even the most socially inept players out there can find comrades to help lessen the burden easily enough. Throughout each stage, you’ll be able to collect the bones of fallen warriors. And, once returned to the hub town’s church, you can resurrect them to have them fight alongside you. This makes forming your ideal party easy enough. Additionally, if you uncover the bones of some sad sap you don’t need, you can always bury them in hopes of claiming a special rare item as a reward.

Without a doubt, Dragon’s Crown Pro is a solid solo experience. However, like with any good beat ’em up, playing with friends is where it really shines. The game supports couch cooperative play for up to four players. Additionally, you can take the fight online and battle over PSN. Vanillaware has even added cross-platform support between all versions of this game. This means that even if you have another friend with Dragon’s Crown Pro, and two other friends with the PS3 and Vita versions of the original, you can all play together without a hitch. Talk about convenience!

There’s a real sense of satisfaction that comes from playing with a solid group that knows how to use their roles well to create a well-oiled dragon-slaying machine as you work together to topple fierce bosses, collect loot, and scour the labyrinthine levels in search of secrets. Unfortunately, playing with friends also makes things a bit too hectic at times. During heated melees, it can be hard to tell what’s going on. This can make strategizing seem all but impossible during the more explosive battles. Still, it’s hard not to marvel at all of the chaos as it unfolds, and this frantic pace keeps the action exciting.

While I admit I would have liked to see more content added to this remaster, Dragon’s Crown Pro is still one of the finest beat ’em ups available today. I love its satisfying loop of quest completion, loot collection, and epic boss battles. And the rock-solid cooperative gameplay is just as enthralling now as it was when the game first released. Simply put, if you have even a passing interest in these types of games, then you really do owe it to yourself to give it a try.

With its gorgeous 4K visuals, steady 60fps frame rate, grand orchestral score, and cross-platform play, there’s a lot to love here. But if you already own the PS3 or Vita versions, Dragon’s Crown Pro probably isn’t a must-buy. That being said, if you’ve yet to dive into the realm of Hydeland, there’s no better place to start.

Full disclosure: This review is based on a copy of Dragon’s Crown Pro that was given to Hey Poor Player by the publisher.