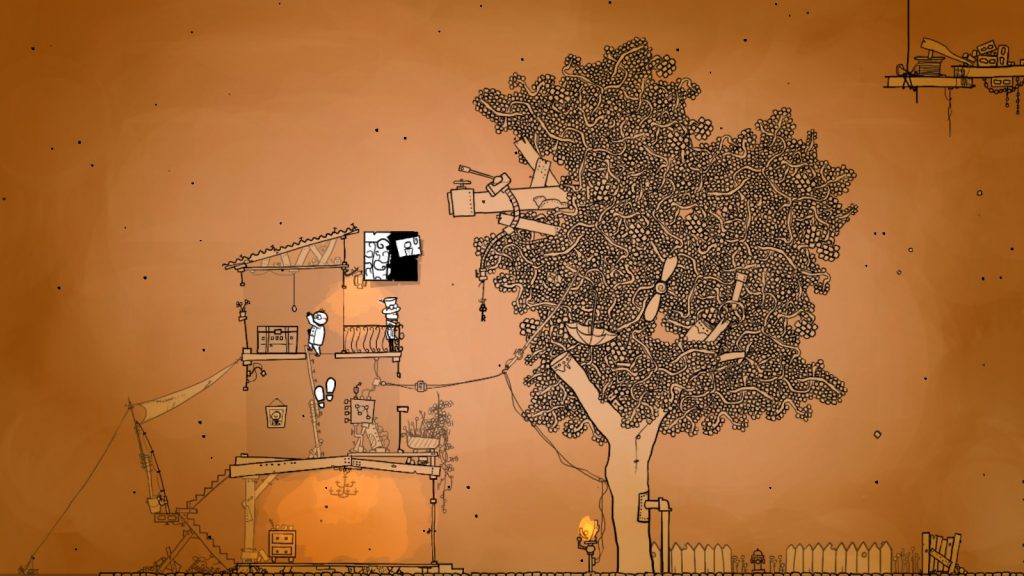 39 Days to Mars is a two-player puzzle-adventure game set in Victorian Britain. The two main characters Sir Albert Wickes and Clarence Baxter have gotten bored of living in their bizarre, multiple story house and decide to take a trip to Mars together. Before they arrive at Mars, they must first fix and prepare their ship, then maintain it on the way. It’s the player’s job, both of them, to work together to keep the ship in one piece, and to take Albert and Baxter to Mars!

To fix the ship, you must solve various small puzzles the game presents to you. If you fail, you’ll break the ship even more. Albert and Baxter are devoted to their mission in space exploration, but they are also creatures of habit who know when to take a break, so you’ll have to make them a cup of tea in-between projects. It’s a very short game – the two-player campaign lasting around an hour, give or take depending on how well you best the puzzles. But a lot is packed into that time including collecting coal on a penny-farthing and fighting off space kraken!

Sail Through the Stars 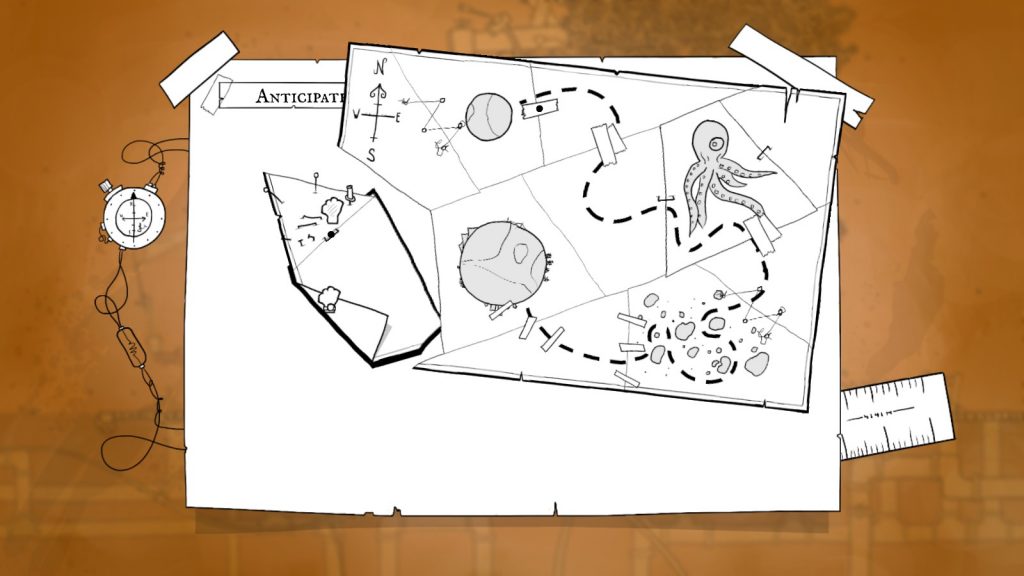 One would think there would be a simpler route…

I’m not the greatest lover of two-player gaming, I’ll confess. I hate the way game developers are always trying to get me to socialize, telling me I’ll have “more fun” when I play with a friend. Really what they mean is you’ll get more frustrated and probably have an unnecessary fight with said friend after they trip over and fail the mission. But I decided to play 39 Days to Mars the way the creators intended, and sat down with my boyfriend to play through it.

My first thought was that I loved how the controls were laid out. It’s a small point, but often two-player PC games require Xbox controllers. Sure, they’ll say you can play it without, but what that means is two people right up in each other’s personal bubbles as they try and share one keyboard. In 39 Days, one player controls the keyboard, the other the mouse. (If you’re a laptop gamer I recommend using an external mouse.)

The puzzles are incredibly frustrating, not coming with any sort of instruction and few hints from the game, but they are also very satisfying and a great bonding experience. I feel like this is the game that can repair distant friendships and close old wounds. You must communicate constantly with the other player, telling them your plans and what you need them to do, along with listening to them and what they need. There is a great deal of trial and error here, which can lead to a few arguments, but that just makes it all the more satisfying when you both succeed. If you absolutely can’t stand other humans, that’s okay too, the single player campaign is similar and very doable. 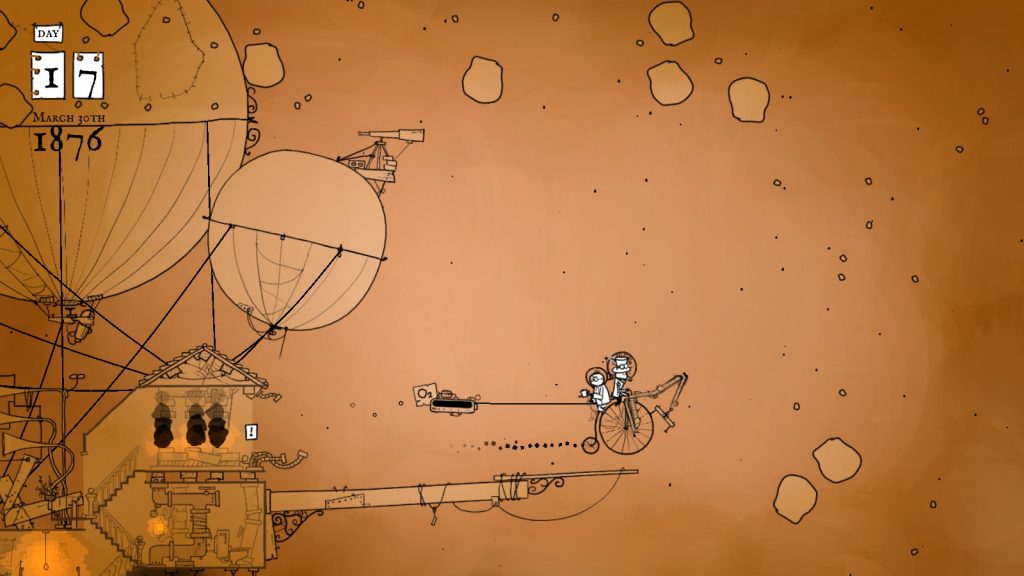 Probably the most notable thing about 39 Days to Mars is how beautiful the game is. The art style isn’t overly complex, but it’s interesting and can only be described as adorable. There is something very gothic about the style, possibly due to the black and white on the brown background, and the steampunk machine style. It’s very unique, with a lot of attention to detail across the ship. The writing is very witty and often made me laugh. There isn’t a great deal of dialogue in the game, but both explorers speak up if something helpful comes along and nearly everything said is worthy of at least a smile. One would think the Oxford-English accents and references to tea would become tiresome after a while, but really it just adds to how delightful the game really is.

I think what really creates the atmosphere in the game is the music. It’s so bloody charming! Perhaps that’s what makes the inventive, but frustrating puzzles so calming, and why you don’t feel the need to destroy the other player. The music puts you in this gentle, happy state of mind, like you’re just on a happy space cruise through the stars- so what if the ship is destroying itself? I think I could hear that music after falling into a pit of starving lions and still think that everything was going to be alright.

I suppose the only main criticism I could give to 39 Days to Mars is that it’s not long enough. As I mentioned, the whole thing can be over in an hour. I wanted it to carry on for as long as possible. I could have sailed off into the distance with Albert and Baxter, making them tea and fixing their ship for all eternity.

Get a Cuppa and Set Sail 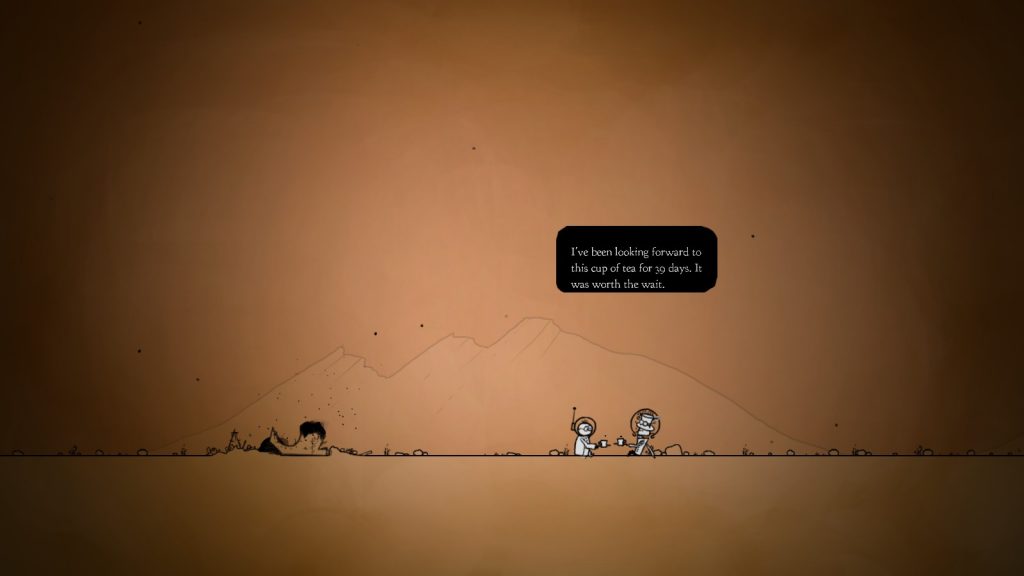 How are you drinking tea through your space helmets?

I was tempted to knock a point off this game for some of the puzzles not giving any direction, but that felt too whiney. With a lot of puzzles, a failed attempt doesn’t mean certain doom, and the ones that do just offer the player another story arc, giving 39 Days to Mars more replay value.

Do I recommend you find a second player before buying the game? Yes, but then so do its creators.

At the end of the day, 39 Days to Mars, makes me happy. It’s fun, it’s cute and it’s engaging. It’s certainly a bit too short, but I had more fun playing this for an hour than I have playing seven hours of other new games this year.

Full disclosure: This review is based on a PC review copy of 39 Days to Mars given to HeyPoorPlayer by the publisher.

Persona 5 will steal your beating heart Atlus’ Persona series has exploded over the past few console generations. What was once a rather unassuming, niche RPG centered around creepy occult…