Survive in Vinland – Or Don’t! 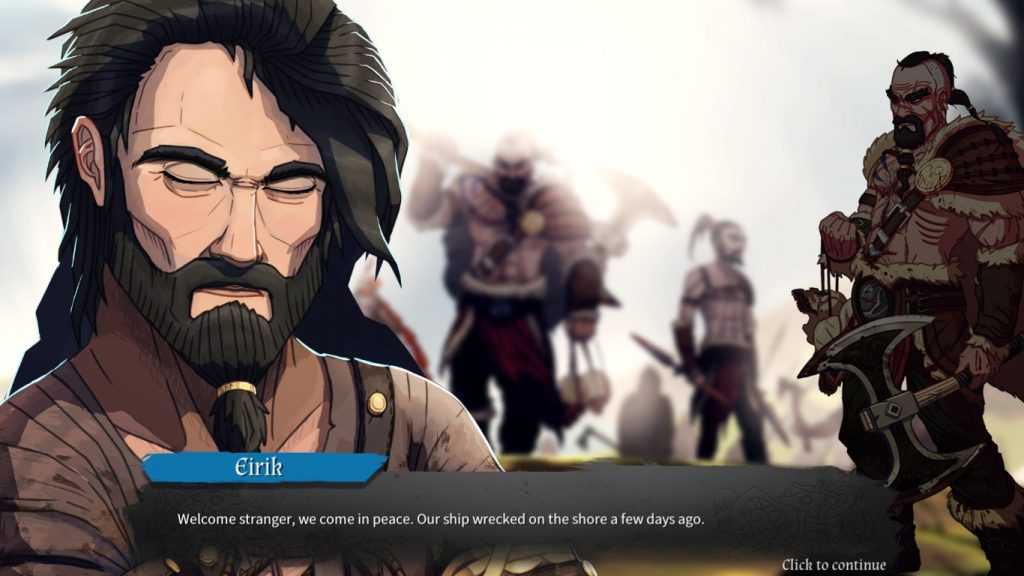 Dead in Vinland is a turn-based battle strategy/survival management game with a lot of Nordic Viking goodness!

You follow the family of Eirik, an exiled Viking and his family, his wife Blodeuwedd, their daughter Kari (Kari on miehen nimi… the names feel a bit like they were pulled out of a horned nordic hat) and Blodeuwedd’s sister Moira. After being chased from their homeland, the family get shipwrecked on a small island, in what the Vikings called “Vinland”, a small area in North America. Eirik and family decide to set up camp here in an attempt to start their lives again, making the most of a bad situation! During their stay they’ll encounter many other shipwrecked or abandoned people, from all corners of the globe. Which does make me wonder where exactly Vinland is in this canon.

You must build up the campsite, adding a hunting station, a mining site or a healing tent etc, as well as maintaining the needs of our family. To make matters more interesting: a tyrannical Viking ruler is threatening your family and once a week you must hand over some of your resources, or he’ll send a huge person to beat the heck out of a member of your tribe. 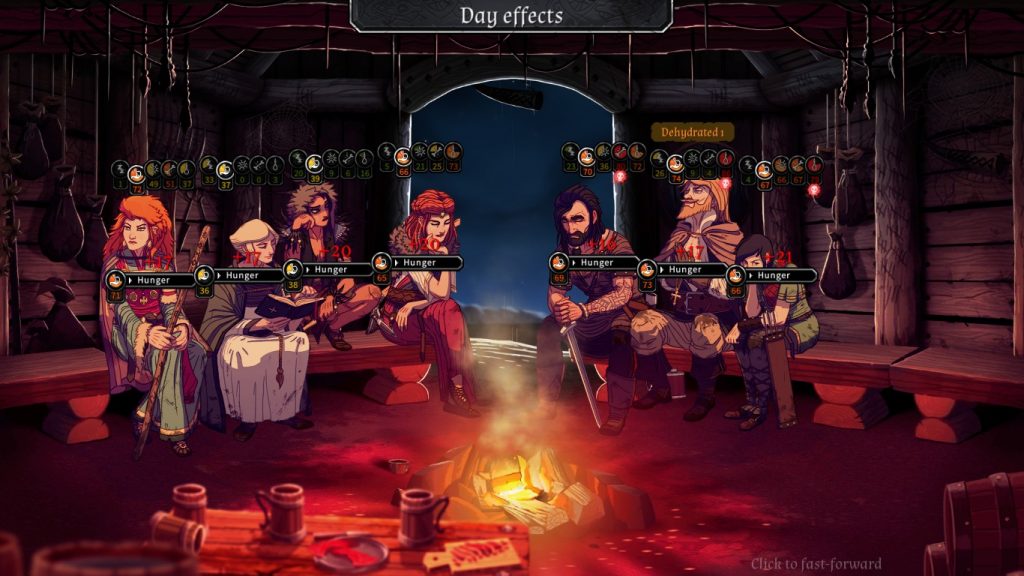 While you start out with four family members, more people can join your tribe the more you explore the island. Each person has the same “needs”, which is to keep their hunger, sickness, injury, fatigue and depression in check. Part of the gameplay is to stop any of these doom-meters from reaching one hundred percent – kind of like The Sims but lower on Maslow’s Hierarchy of Needs. If one of the bars reaches one hundred percent, then they will die. You can build various stations around the camp to help with their needs, such as a napping station to lower their fatigue, a health tent to cure sickness or injury and a tavern to allay their depression. Although I will say that the message that alcohol cures depression is very questionable!

If you don’t have a lot of experience in management games and are looking for a nice gentle one to start you off – I would not recommend Lost in Vinland. It is very difficult. It’s almost impossible to predict how stats will be affected from day to day, as many variables including weather or encounters with enemies are rather random. Keeping all their stats in the green is pretty much impossible, so it becomes a case of just trying to keep the bastards alive. At one point I had to have one of the characters constantly in the healing tent otherwise she would have died of illness! Then of course we ran out of herbs because no-one could collect them, so she died anyway. Food perishes very quickly if you don’t build the storage, and building can take a while, so almost every day you need to have someone collecting food. Some characters have to take one day of rest for every day of work they actually do! So much for the tough and fearless Vikings!

We All Pitch In 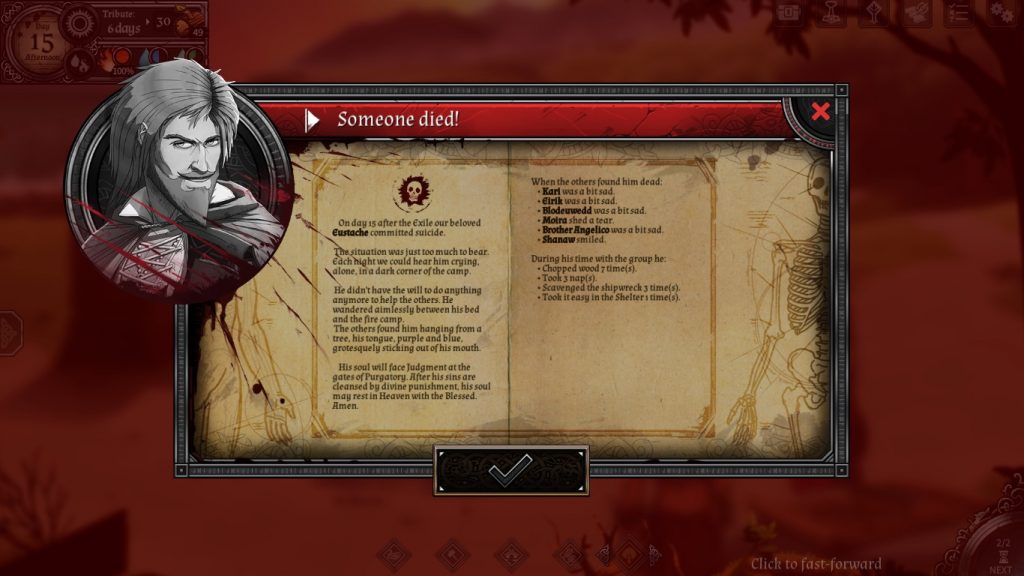 If you are experienced in management games, you’ll have a lot of fun playing. The wild world of Vinland  will keep you on your toes, constantly throwing you new tasks or new ways to improve the lives of your tribe. It has this very addictive nature to it – even though time moves slowly, there is this sense of achievement at the end of each day when you manage to build something new and keep everyone alive!

Twice a day, morning and afternoon, you assign people to tasks around the campsite. This is a great way to play, as you can swap people around a keep an eye on their needs, while still knowing nothing can go terribly wrong whilst you’re not watching. Different characters are better suited to different tasks, so it takes a little while to get into the swing of things. The characters only need food and water at the end of the day, so you can prepare to have everything they might need ready.

Just make sure to keep the four main characters alive, otherwise the game will end. There are adjusted difficulty levels to the game, but the changes aren’t immense (and you’ll be roundly shamed if you play in the easiest mode!) 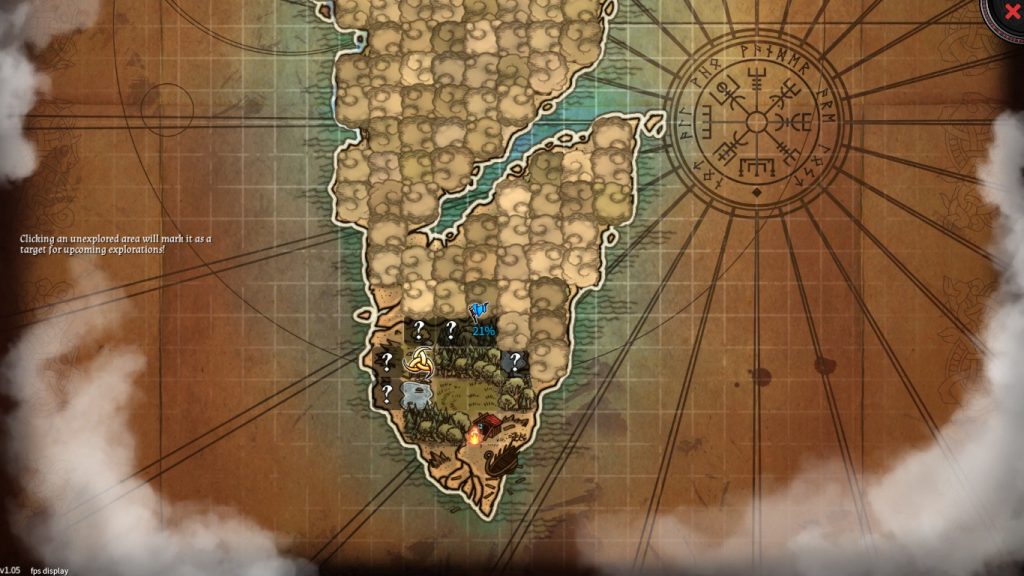 Perhaps the most interesting part of Dead in Vinland is its art style. It’s got this bizarre comic book feel to it, that takes the edge off all the suffering and death. All the characters look very unique and individual, along with all the scenery, which is impressive given how many areas there are to explore. It’s got this fun and colourful visual element to it, which is kind of funny given how grim the desperate survivalist premise of Vinland actually is. A lot of creativity has gone into this world. When you send people out to explore you don’t know if they’ll find a cute fluffy sheep or a rotting bull head! I couldn’t help but get excited, wondering what I was going to discover next.

The writing falls a little short in areas. The detail settings and grim reality of the gameplay work well to put the player in this Nordic wasteland – but then crude or modern jokes pull you back out of it. That and the characters can seem a little generic at times. The family dynamic feels like it would be better suited in a sit-com than an adventure game, especially the stereotypical whiney, complaining teenage daughter. That being said, you do meet some more interesting people later on in the game, who can come and join your campsite. I would have liked more opportunity to get to know the characters, or more opportunity as the player to affect their relationships. Each character’s relationship with the other can affect the gameplay. For example, if one character likes the other they might comfort them when they’re depressed or offer to help with their chores, reducing their fatigue. But a lot of the dialogue is predetermined, so your player choices don’t affect the relationships that often. 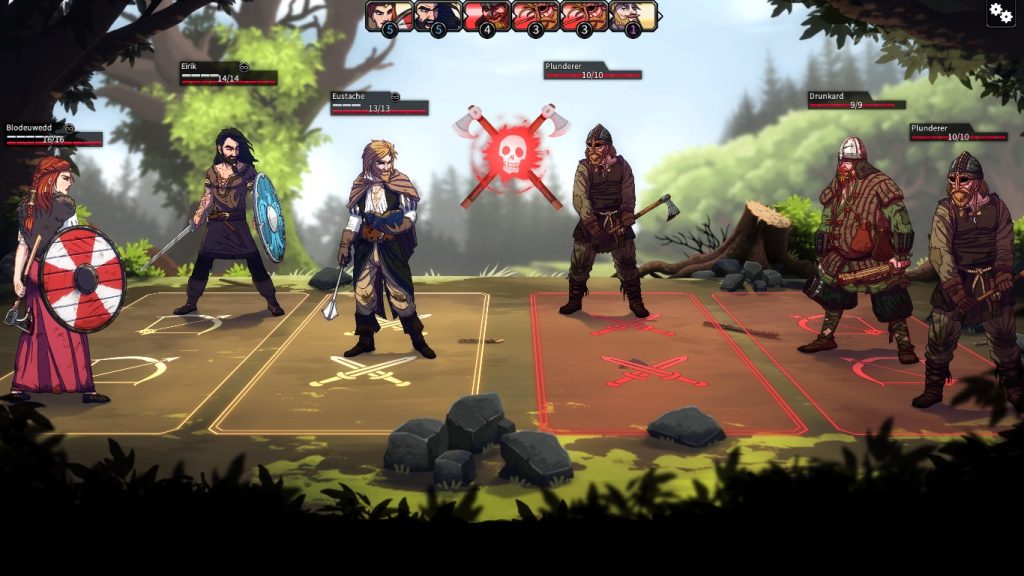 The combat in Dead in Vinland  can drag on a bit and get a little repetitive, but no more than any other turn-based combat system. You can choose three of your people who will enter the battle, each character having different strengths, who will then attack the enemies in a predetermined order. Characters are often either archers or melee fighters, so are more useful in different positions of the battle.

I personally prefer turn-based combat to fighting games, as there is a lot more strategy to be had here, rather than just throwing punches as fast as you can. Each attack your characters have will come with a percentage, showing you how likely they are to work. Maybe it’s just me, but the game has a very strange idea of what “100 percent” means. Even when I was promised an attack had a one hundred percent accuracy, I would still occasionally miss. Realistic maybe, but mathematically questionable.

Your enemies are very similar, which is one of the reasons why it begins to get a little repetitive. I can’t deny that I began to avoid combat after a while, as it took too long, and you rarely get anything helpful out of it. Even so, it feels like a necessary addition to a game and is another way of keeping the days interesting. 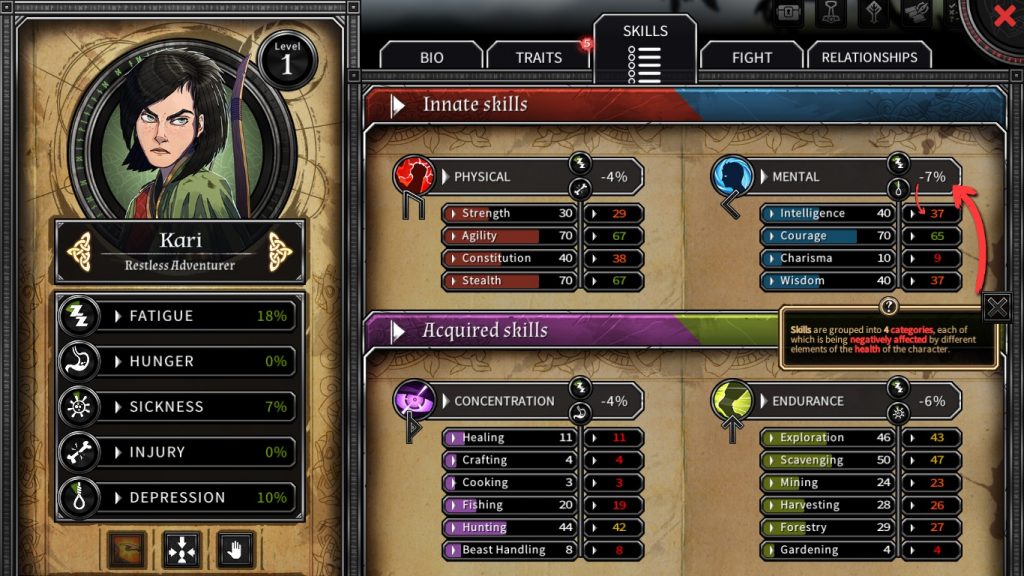 Although there is a lot to nit-pick about Dead in Vinland, how hard it is to maintain the needs of the tribe, how slowly you build the campsite and the repetitive combat – it is just that: nit-picking. What the game ultimately is, is a colourful strategy game that draws you right in and makes you want to improve the lives of this diverse, growing family. I don’t even want the things I’ve complained about to change, they add so much to the game, although the writing could be improved. Every time I pulled someone back from suicide or make the resources for the big scary Viking Mafia, I feel happy for the fictional tribe.

The game even constantly saves for you after each day, so you can go back and redo any decisions you weren’t happy with. Besides, this has got to be a lot more pleasant than wandering the wilderness in real life! I can complain about how needy these Vikings are but I would have been crying on the floor in fetal position before noon on the second day.

Full disclosure: This review is based on a PC review copy of Dead in Vinland given to HeyPoorPlayer by the publisher.