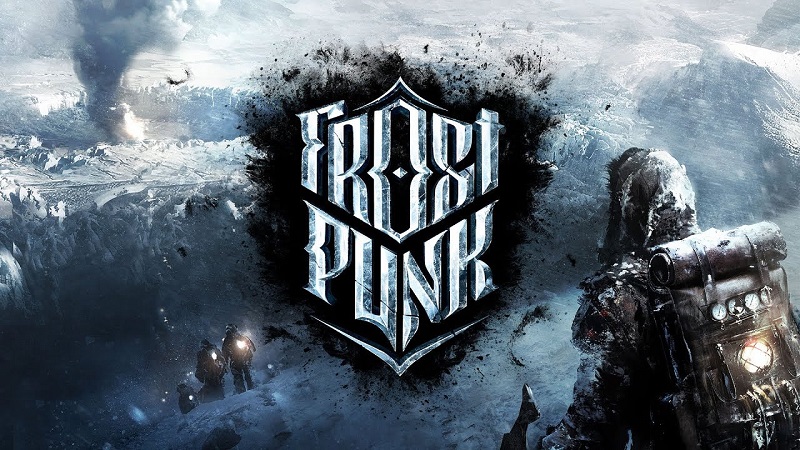 11 bit Studios first made a name for themselves with 2014’s This War Of Mine, which stood out by being not only a great strategy game but also a powerful anti-war narrative, told through a group of civilians who didn’t have the luxury of caring about country or cause or anything other than where the next meal was coming from. Their latest offering, Frostpunk, is an attempt to see whether or not the War of Mine lightning can strike twice, once again presenting you with a miserable situation and a series of choices that will likely only make things more miserable for your ragtag group of survivors.

Comparing the two games to each other is unavoidable, which is a shame, because the comparison does Frostpunk no favors. As a citybuilder it’s pretty good. As a narrative about morality and totalitarianism, well, maybe it would’ve felt more original in a world before Papers, Please. 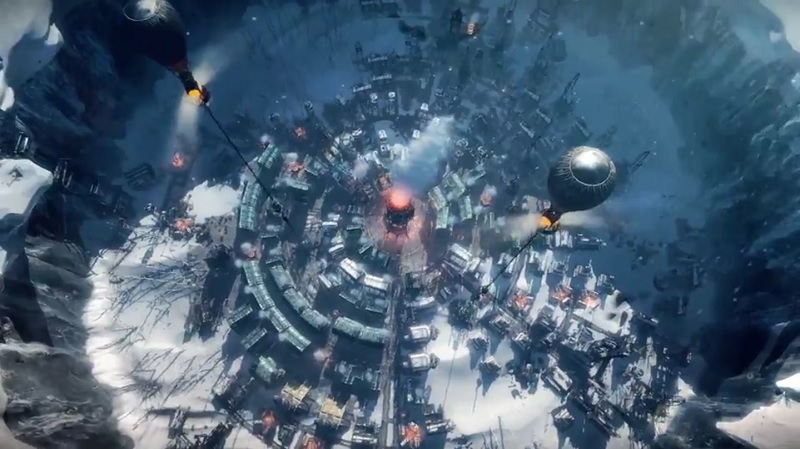 So. It’s the post-apocalypse (as it so often is in modern videogames) and today’s flavor of armageddon is “frozen wasteland.” You’re in charge of building and managing New London, the last city on Earth, by gathering coal, wood and steel. With these resources you’ll build buildings, advance through the tech tree, and – most importantly – keep the massive generator in the center of town running so that everyone can stay warm. The workers will gather these materials with little-to-no micromanagement, so your biggest concern is simply how many people (of which there is never enough) to send to each resource.

But there’s two more resources that are even more important – Discontent and Hope. If the former maxes out or the latter drops to zero, you’ll lose the game outright. And it’s here that the game’s regular moral choice pop-ups come in. The workers want to go home for the day – will you let them? You’ll lose resources but gain Hope. Will you send children to the mines, greatly increasing your workforce and your Discontent? 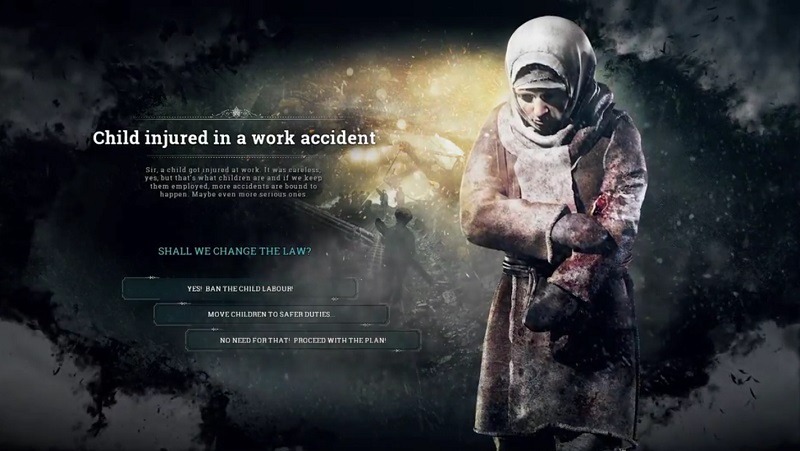 Every decision has both practical and ethical considerations to be weighed, but I found myself rarely concerned by the latter. Maybe I’m just an evil bastard, but I think it has more to do with the big picture perspective Frostpunk imposes on the player. This War Of Mine took place in a single building, with a small handful of survivors you came to know by name and personality. Frostpunk takes place on a city-wide scale, with randomly generated portraits and names, making it difficult to care about any individual person. In pop-up text, they’re frequently described even more vaguely as “a woman” or “a citizen.”

In real life, I would be horrified by many of the totalitarian rules I put into place. But these children are zeros and ones and they’re never shown as anything more than nondescript specks on the map, so why should I feel remorse when I send them to work? Especially when the alternative is for everyone to die, and for me – the only living creature involved in the decision – to lose hours of playtime. I don’t know anyone who even considered choosing the “ethical” option at this point in the campaign, which speaks to me of how little choice is actually involved in Frostpunk‘s moral dilemmas.

Besides, we’ve seen it by now. As games that force you to be a fascist go, Papers, Please really was much more personally affecting, and even Beholder was more engaging. They Are Billions, released in January of this year, feels like a much more intense struggle against the post-apocalyptic elements, and it doesn’t have to interrupt your game with a Choose-Your-Own Adventure every ten minutes to make you care about keeping your citizens alive. And for the record, I’m not sure I agree with Frostpunk‘s central thesis – that the only way to survive a disaster is to become a monster – as much as I agreed with the anti-war narrative of 11 bit Studios’ previous offering.

As a citybuilder/survival game, Frostpunk works pretty well. Even if the choices aren’t affecting on an emotional level, there’s a good risk-reward tradeoff required to keep everything in balance, and there’s plenty of depth to the gameplay since you have to consider political and social considerations at least as much as base resource management. I guess I can’t think of any recent entry into the genre that’s “better” in a gameplay sense, even if the campaign is short and there’s not much to do once you’ve played it through once. The graphics are pretty, though you’d better have a really good video card because they lag like hell at max settings and there’s not many options you can turn down.

If you’re a diehard fan of the survival genre or you just need something new to scratch that War of Mine itch, this truly isn’t a bad little game. The much-heralded moral choice elements might be lacking, but hey – moral choice elements that actually work in a game are still rare enough to be the exception rather than the rule. It’s not high art, but it’s a good way to kill a weekend, and there’s worse things in this world than that.

Full disclosure: This review is based on a copy of Frostpunk given to Hey Poor Player by the publisher