A Shooter For Those With Basic Expectations For Shooters 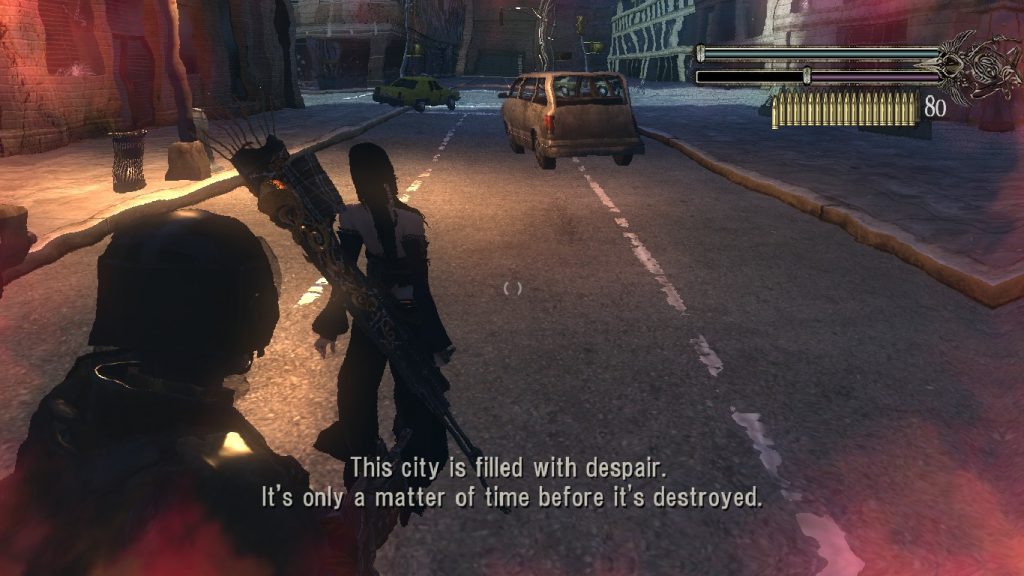 Humanity is over so… Witches?

I never played Bullet Witch on the Xbox, so this review comes from a whole new experience of the game. What does surprise me is that, after googling the game, I learned that it mostly received mixed to negative reviews. So I am left wondering why the developers thought this was one for a comeback. I also noticed that all player comments regarding the game positively commented on how “hot” Alicia was.

Bullet Witch is a third person shooter game where you play as witchy broom-gun wielding Alicia, a mysterious magic user who is on a mission to save earth from the daemons. Accompanied by your creatively named companion “The Darkness.” I’m not sure what The Darkness is exactly. It’s mostly just a disembodied voice you hear sometimes. Usually giving you advice that either points out the obvious or is too vague to be actually useful. Humanity is now being terrorised by a bunch of dudes who look like the Mouth of Sauron and I guess it’s up to Alicia to stop them because she’s the one with the big gun. You make your way through the game world, destroy several bosses and are accompanied by the usual army guys. They will sometimes help you; sometimes run into a wall for no reason.

I will courteously throw out here that shooters aren’t normally my game of choice. Not that I don’t enjoy shooters when they have something original to offer or a decent story. So, with that in mind: Let’s talk about Bullet Witch.

The Dystopia of Five Years Ago… 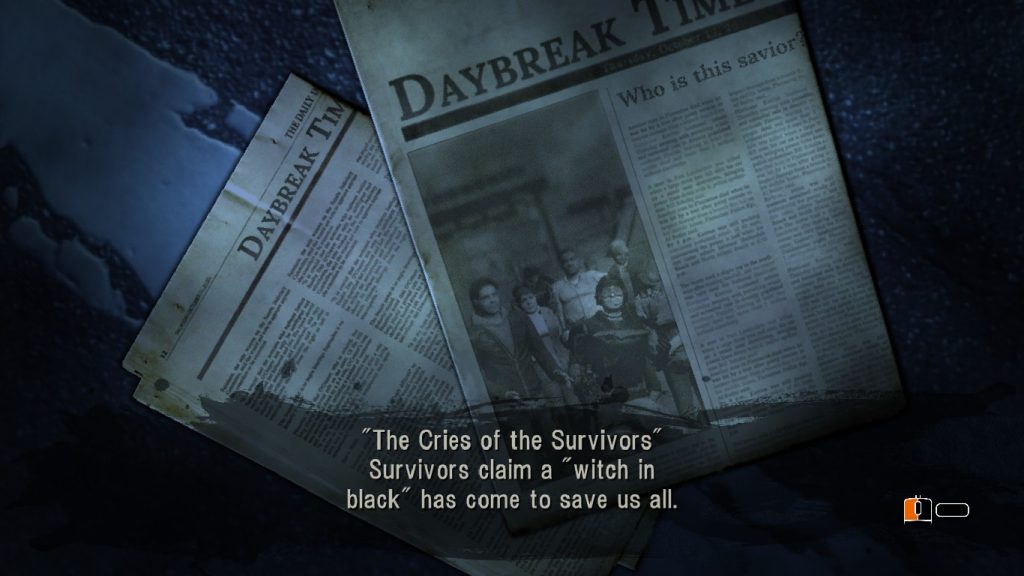 The World Has Been Distroyed But Still Newspapers…

Okay, I get that this game came out ten years ago but playing a game set in the post-apocalyptic wasteland of 2013 in 2018 is more laughable than anything else. This was more of a warning to me that not much in this game had changed since 2007 if they didn’t even think to change the dates. Perhaps they could have made this game relevant and set the world disaster sometime after a certain president came to power in an attempt to make us meekly laugh at an entirely possible future. (Mind you, one of the diary entries was subtitled as 2016, so maybe they’ve just lost track of time.)

When you first play Bullet Witch you have to sit through three minutes of intros and explanations (I timed it.) Now, this would be perfectly acceptable if it was all relevant, which I don’t think it is. The intro lists the catastrophes that have hit the planet. There was war, starvation and natural disasters, but how did that lead to a bunch of deformed skin creatures hunting down the rest of humanity? And how did we get from that to witches?! The daemons caused the end of the world I think, but that’s not explained in the long intro, so I don’t really understand it’s purpose.

After the intro we don’t really get a lot of story. We learn a bit about Alicia towards the end, but overall she doesn’t say much.  We don’t even know her name until episode two. Okay, so Bullet Witch doesn’t really need a story, it’s all about shooty-guns and explosions. But then why include a three-minute intro in the first place? I guess the creators hoped we’d focus more on the big gun and the pretty girl.

Guns Solve All Your Problems 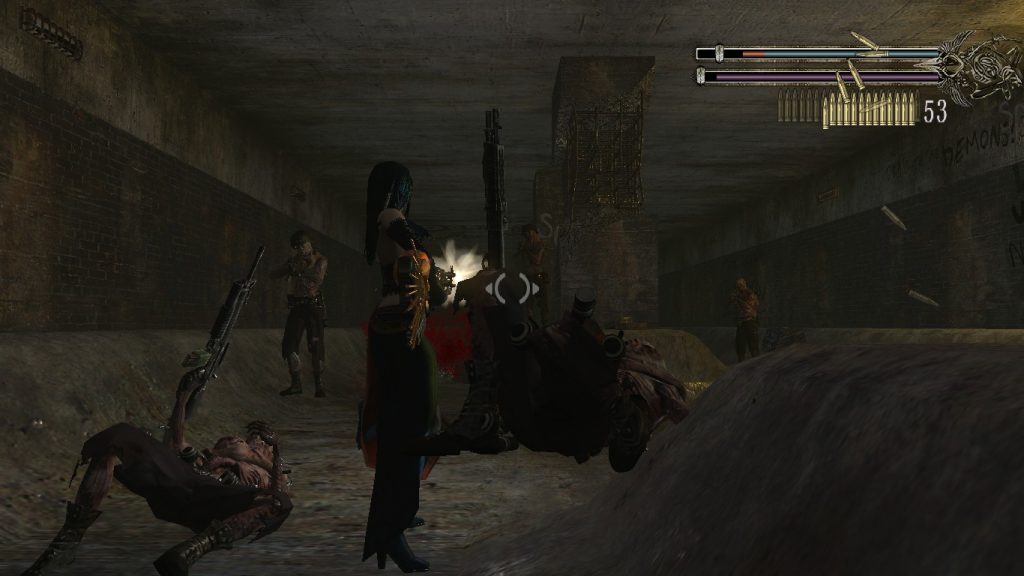 The moment you get the intro out of the way you go straight into the game and have to shoot up a bunch of dudes.

Before I even started playing Bullet Witch, I wondered why a witch was the protagonist in a shooter game thinking that shooters were more about guns than magic. But shortly into playing, I realised that this was the one witch who is sponsored by the NRA. Alicia hunts down her enemies with her gun, which she reloads with magic, meaning you don’t run out of bullets – so that’s pretty good. A lot of the time I just held my finger down on the mouse and let the gun take care of everything.

You do have some spells. Although you can buy more spells later, you are given three basic ones at the beginning. One that can build a wall, so enemies can’t shoot you back, one the heals civilians and another super amazing kill all spell for the big guys which takes them out in one hit (except when it doesn’t!)

The trouble with the magic is that you have to wait until all the enemies you’re attacking decide to take a tea break before you can use it. Every time I died it was because I was trying to find the right spell but couldn’t cast it in time. You have to scroll through them with your mouse and cast them using one of three keys so press them all until you find the right one. I get that this game was developed for Xbox, but computers have a whole keyboard of buttons to choose from for this thing. Most of the keyboard is unused in the game, so it would be much better if you could just assign spells to keys. 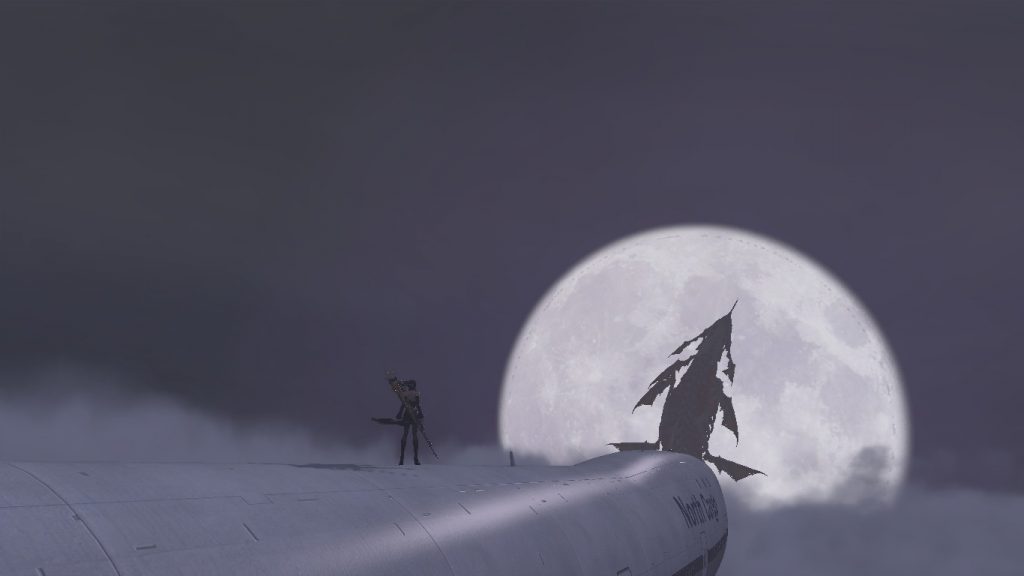 Before writing this, I looked up some thoughts on the 2007 graphics of the game and I was surprised to find out that a lot of what people said matched my own notes. Unfortunately, Bullet Witch isn’t as visually pleasing as it could have been.

The cut-scenes look better than the actual game, with a bit more detail and natural movements. But the moment you start playing everything goes a bit weird. Whenever you go through shadows, it looks like something is wrong with your screen. There is something disturbing about the way Alicia runs, possibly due to the stiff movements of her clothes and her hair moving like it’s been gelled for the nineties. (That’ll show her for wearing heels in a war zone.) Despite this, the game still manages to sexualize Alicia at every opportunity. She can take a surprising number of bullets for someone wearing so little and I swear there are moments when the camera makes you look up her skirt! Atari, it’s 2018 now, female protagonists are allowed to be more than temptations for teenage boys!

The levels of Bullet Witch are fairly samey. Most of the world just feels like wasted space. A lot of the time I wasn’t sure where I was supposed to go, as there is nothing that tries to direct you. You don’t have a map or any way of keeping track of your mission goals. I don’t recommend spending points on health because something in the game will either kill you or it won’t.  You’re better off piling your points into guns and spells to kill your enemies faster, as every battle just seems to boil down to shoot me before I shoot you. The snipers are kind of annoying, but they’re also very random, so you can just try to avoid them. Although you might be killed anyway by something randomly falling on you out of nowhere!

The Saviour of Humanity?

After a while, I did find myself having fun playing Bullet Witch, but only after an hour of playing and it was short-lived. Normally the fun was destroyed by easy to kill enemies, something coming out of nowhere and killing me, or me getting lost in the game world and having to reset back to the last checkpoint.

It feels like a very generic shooter that assumes all the player wants is to run around shooting things, with no desire for a real challenge or actual gameplay. Shooters can have these things – like Left 4 Dead or Resident Evil. I do like the gothic charm of Bullet Witch’s style, but it is ruined by the lack of effort put into its visuals. It feels like everything there was to like about Bullet Witch has very little effort put into it and it’s not bringing anything new to the table. It’s repetitive and honestly very bland. If you liked the original Bullet Witch and your copy, along with your Xbox, was destroyed in some kind of tragic accident leaving you only with your PC, then I would recommend buying Bullet Witch. Otherwise, I don’t think you’ll be getting anything new.

Also, can we all just agree that random NPC dialogue adds nothing to games? The highlights in this game were a Sauron-Mouth declaring “I’m about to die,” after Alicia shot him down and a random guy screaming “Damn, they’ve found us,” after wandering in the middle of the road surrounded by enemies!

Full disclosure: This review is based on a copy of Bullet Witch given to Hey Poor Player by the publisher