After successfully launching on the PlayStation 4 and PC, Natsume has finally decided to bring Wild Guns Reloaded to the Switch, giving prospective gunslingers the chance to mow down hordes of biomechanical bandits and dastardly desperados from the comfort of their couch or on the go. More than a mere copy and paste port job, the Switch version of the game introduces a handful of new modes into the mix, making it the definitive edition of this retro remaster. But with over two decades having passed since the game first released, does this bullet hell hoedown still hold up? Read on and find out! 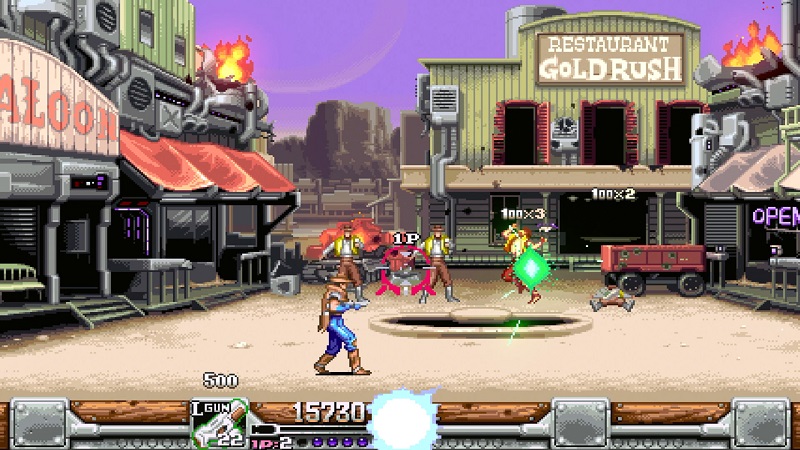 Just in case you’ve been living under a rock for the past 24 years, Wild Guns Reloaded is an enhanced port of Natsume’s 1994 SNES classic, Wild Guns. The original game put players in controls of Clint and Annie, a pair of heavily-armed bounty hunters, as they battled the forces of the evil Kid Gang. The action unfolds from a third-person perspective similar to that of arcade classics Blood Bros. and Cabal, where you control both your targeting reticle and character with the same D-pad. The goal is to beat back waves of baddies in a variety of western-themed shooting galleries such as saloons, mines, and, of course, aboard a racing steam engine.

This isn’t your daddy’s spaghetti Western, though. Wild Guns Reloaded is all about balls to the wall action. In it, you’ll have access to a wide arsenal of weapons like plasma cannons, laser beams, energy lassos, and all sorts of fantastical weaponry as you take on mechanical menaces that tower over buildings and augmented outlaws with enough firepower to level Montana. This is pure, unadulterated 1990s ridiculousness at its best.

Fun For The Whole Posse 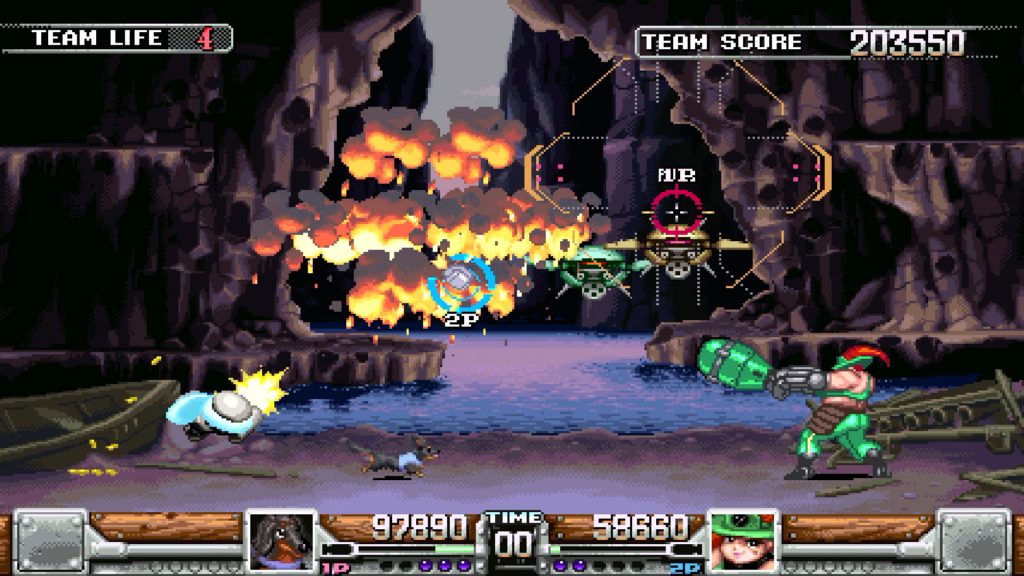 Don’t let her bulky frame fool you: Doris is a formidable fighter thanks to her explosive arsenal.

Love them as I do, the series’ familiar protagonists, Clint and Annie, are a bit uninspired and play largely the same. Wild Guns Reloaded ups the ante by introducing a pair of new playable characters: Doris, a heavyset woman with a penchant for explosives, and Bullet, a dachshund accompanied by a drone that can unload volleys of hot lead with a handy lock-on shot.

A hulking figure, Doris is slow. However, the grenades she lobs deliver flaming death to a wide area. Additionally, you can hold the button down to throw up to four grenades in a single toss. This makes her devastating in the hands of skilled players. Bullet, on the other hand, is perfect for beginners. He’s a small target, which makes him very hard to hit. Better yet, his lock-on ability makes him invaluable during more chaotic shootouts. He does have an Achilles heel though. His drone can also be hit, which will prevent you from firing momentarily. This keeps him from being too overpowered and essentially breaking the game. 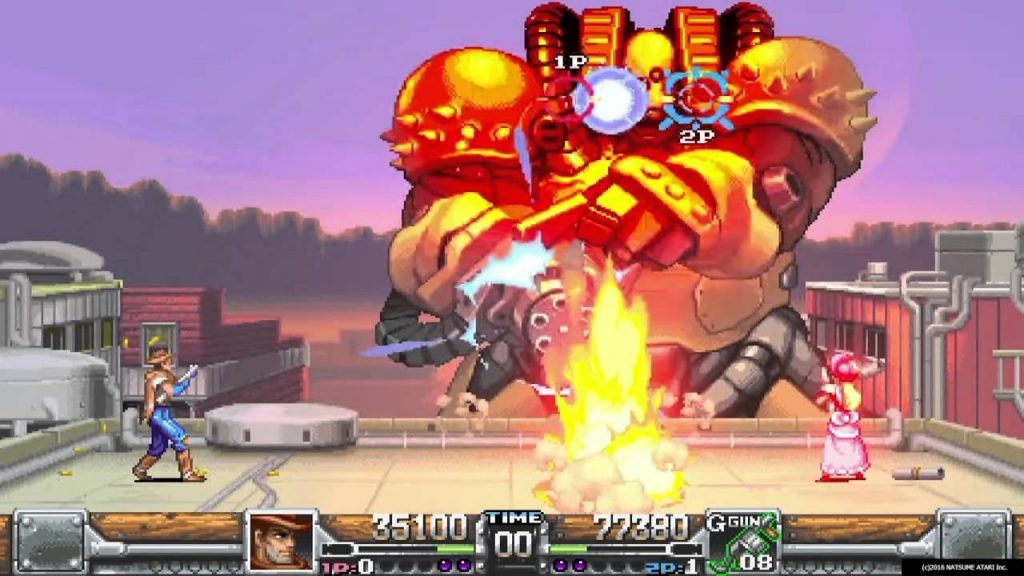 Taking down towering enemies in the Boss Rush mode is a thrill.

In addition to these two new characters, the Switch version of Wild Guns Reloaded also incorporates two new modes. The first is a Beginner Mode that grants the player unlimited lives. Sure, this may sound like a throwaway, but anyone who has played the game will tell you that it can be a soul-crushing experience. That said, this mode is ideal for those who just want to jump into the action and have a good time, or maybe get a handle on the boss patterns. Not exactly my cup of tea, but it’s a welcome feature nonetheless and perfect for those who might want to let their whole family join in for some frantic four-player local cooperative play.

Upon completing the game, you’ll also unlock a Boss Rush Time Attack mode. This allows you to test your skills by going toe-to-toe with the game’s gauntlet of punishing bosses. Personally, I love a good Boss Rush, and this here is no exception. It’s great fun to duke it out with these mechanized monstrosities as fast as you can in an effort to climb to the top of the online leaderboards.

So, is it worth rebuying Wild Guns Reloaded on the Switch just for these two new modes? No, probably not. But they’re excellent additions to the package that help give the game an edge over the previously-released PC and PS4 versions of the game.

Shinier Than A Brand New Spitoon 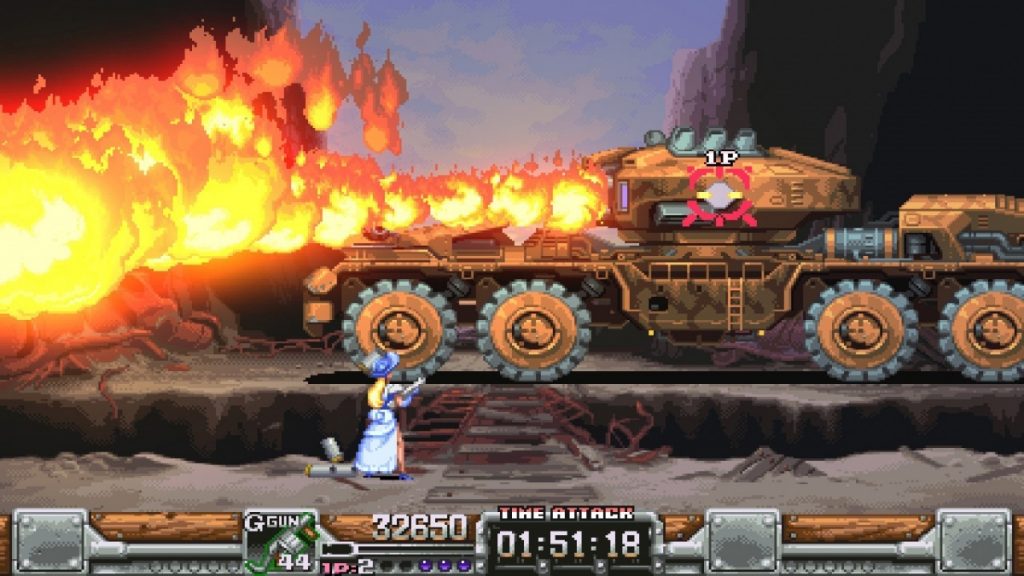 Wild Guns looked great when it originally released in 1994. And, all things considered, 24 years later it still manages to impress. Despite this, Natsume has managed to add some welcome polish to Wild Guns Reloaded to make it shine brighter than ever. Explosions and flame effects jump off of the screen like never before. On top of these new visual flourishes, each stage features subtle touchups that make each scene pop. These enhancements, combined with the game’s already spectacular hand-drawn art style, make for a game that’s exceptionally easy on the eyes. It’s hard not to appreciate how almost every square inch of a scene can be blown to bits or riddled with bullet holes. Just like those boardwalk shooting galleries of old, it’s a ton of fun to just unload on everything in the environment just to see what happens.

Wild Guns Reloaded also features one hell of a soundtrack to accompany the on-screen chaos. The remastered soundtrack is a high-energy symphony of destruction that matches the action perfectly. I found myself humming along to each stage’s theme within minutes, and if you have a weakness for punchy chiptunes then you probably will too. Beating the game also unlocks the original SNES score – a real treat for you retro purists out there.

In case you couldn’t tell, I really enjoyed my time with Wild Guns Reloaded. That’s not to say it’s perfect. Despite adding plenty of new features, the quirks that hobbled the original release still remain. Aiming while moving can feel pretty cumbersome at times thanks to the slow cursor speed. And while you can see where enemy shots are going to land thanks to an on-screen cue, it’s very faint and can feel downright impossible to see when the action gets heavy – like in the game’s chaotic 4-player mode. You can also tell where enemy bombs are going to land when an “Oh no!” prompt appears over your head. And, like the enemy targeting reticles, these icons are easy to miss as well when you’re focusing on moving, shooting, and dodging all at once.

Fear not, buckaroos. With practice and perseverance, you’ll eventually find your rhythm and overcome these minor quibbles to become a grizzled gunslinger.

When all is said and done, this game is an excellent addition to the Switch’s library. But if you’ve already purchased the game on the PC or PlayStation 4, then there’s no real reason to plop down your money on this port. However, if this is your first rodeo, then, by all means, do so. With fast and frenetic action, killer four-player co-op, and the ability to play on your couch or on the go, Wild Guns: Reloaded is the definitive version of Natsume’s SNES classic. And with it being about $200 cheaper than the original goes for these days, it’s hard to argue with the $30 price tag.

Full disclosure: This review is based on a copy of Wild Guns Reloaded given to Hey Poor Player by the publisher.