Can Midoriya overcome his biggest weakness? 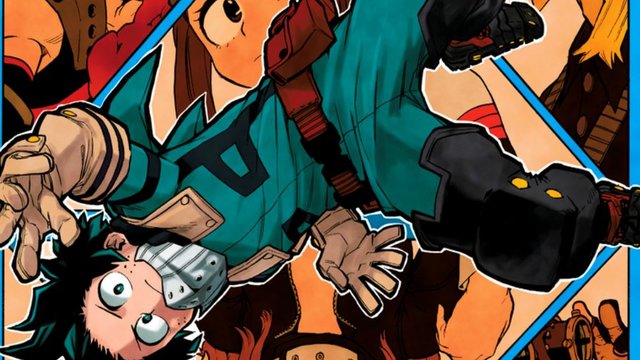 Training arcs: love ’em or hate ’em, they’ve been staples of Shonen manga since the dawn of time. While My Hero Academia has interspersed training sessions throughout such as the hero internships, Kohei Horikoshi’s brisk pacing ensures we never dwell on them for long; that, and well, let’s not forget they do serve the story: after all, young Midoriya’s struggle in utilizing his hand-me-down Quirk has been a major theme hitherto. Midoriya’s long-desired dream may now be a reality, yet his gradual self-destruction renders All For One not a double-edged sword, but a ticking time-bomb. As he seeks counsel with All Might and his fellow heroes-in-training, he recognizes he may’ve been emulating his idol a little too closely. But can he figure out a solution in time for the Provisional Hero Licensing Exam?

Indeed, to claim this would be the most compelling saga of My Hero Academia would be incorrect, especially considering we just covered what remains the series’ storytelling pinnacle. Moreover, while Horikoshi’s tendency to turn Shonen tropes onto their ear shines through, the Licensing Exam isn’t necessarily anything new: as a manga prone to comparisons with Naruto, this segment certainly echoes that series’ Chunin Exams, wherein our young heroes’ capabilities in speed and teamwork (and, as we’ll see in the next volume, search and rescue) is  tested within a free-for-all elimination contest including kids from other schools. With only one hundred students able to pass, over 1,500 entrants are gunning for Class 1-A, not the least of which are the rivals we meet from Ketsubutsu Academy and Shiketsu High.

Thankfully, even if Horikoshi’s imagination isn’t firing on all cylinders, his storytelling remains rock-solid. With Class 1-A in everyone’s sights, we never lose focus on our heroes and their collective match-ups, all the while getting acquainted with their new rivals — in particular, Inasa Yoarashi instantly steals the show as Shiketsu’s star pupil, with his impartial passion for U.A. High School inducing a bleeding head injury in his very first appearance. Of course, Horikoshi takes care in leaving enticing hooks for future (immediate?) developments, with Yoarashi shooting Shoto Todoroki an uncharacteristically icy stare before trotting off. As we ponder what potential friction lies there, other newcomers display visually-inventive Quirks in place of any brooding backstories, namely one student who painlessly grounds his opponents into fleshy meatballs. (And has an inferiority complex regarding his squinty eyes, but let’s not tease him for those.)

Gross. And yet, kinda cool. 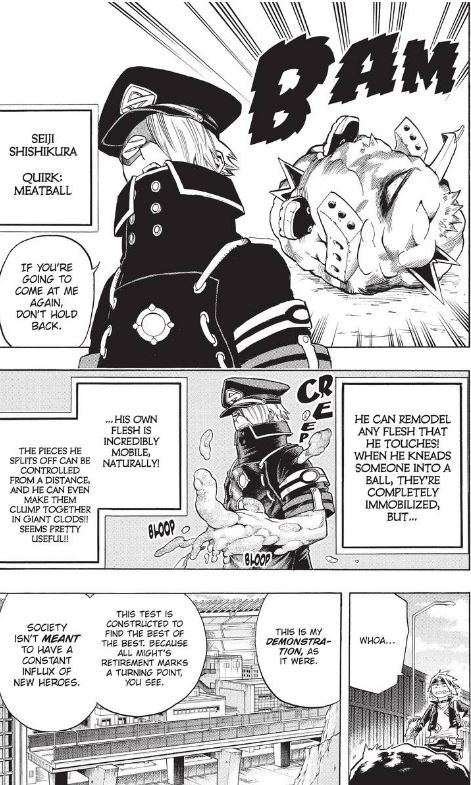 In other words, even if Horikoshi falls back onto familiar Shonen arcs, he still supplies a sturdy blend of narrative, character and action to keep us engaged. At this point, we’ve grown long since past rooting not just for Midoriya but his entire class (yes, even the perverted little grub Mineta), and it’s impossible not to smile when it falls upon one overlooked Class 1-A student to surmount his insecurities and ultimately save the day. Not that Deku himself doesn’t elicit some cheers: we won’t reveal how, exactly, Midoriya overcomes his crippling weakness, but it’s a cathartic “aha!” solution that, coupled with All Might’s seal of approval, represents his first step outside of his hero’s shadow. (Interestingly, he describes it as a “stopgap;” could there a further solution beyond using…those? The body only has so many parts!)

Horikoshi’s art remains a winner as far as action is concerned: the aforementioned human meatballs is one of his most creative Quirks yet, and the weight behind Midoriya’s newfound prowess is expertly aimed towards the reader to make a dazzling first impression. However, the showstopping scene is Uraraka dwelling on her newfound crush for Midoriya; upon being pressed by her gal pals, her gravity Quirk activates in embarrassment as she floats away in a dizzying, babbling mess. As a contender for the most adorable girl of Weekly Shonen Jump — a position already facing stiff competition from Megumi Tadokoro (Food Wars!) and the ladies of We Never Learn — perhaps this one scene shoots her straight to the top? (While we’re on the subject of girls, anyone aghast at My Hero Academia‘s sexualization of its younger female cast will be disappointed to witness further examples here; granted, any straight teenage boy would share Midoriya’s reaction to Mei Hatsume’s return, but Camie Utsushimi’s undressing is blatant fanservice directed only for the reader’s gaze.)

Having come off the high of last volume’s world-changing events, it’s only inevitable My Hero Academia dials things back in shifting focus. The Licensing Exam may not be over, but our heroes’ surprise opponents for the next round proves the series is hardly out of tricks. A transitional arc this may be, but it’s hardly a lull in Midoriya’s own development into the world’s greatest hero.