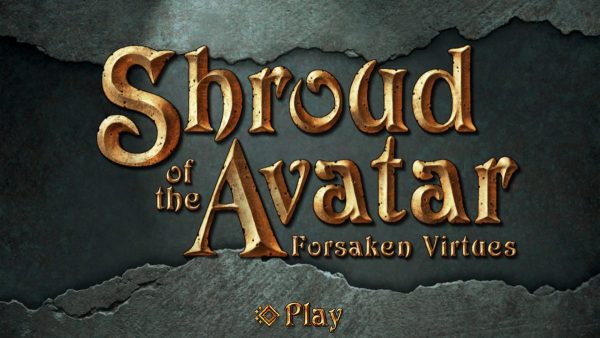 Look guys, RPGs are my thing. My. Thing. I know they can often be clunky and and even straight up atrocious at times, but I can’t help myself. Stories are an essential element of our everyday life, and a good RPG will always succeed in its storytelling above all else. Sure, they get redundant and repetitive at times but that is often a pitfall of the genre, especially when speaking to a larger scale world or map.

Usually in a good RPG the cons are outweighed by the pros so that even amidst a myriad of bugs and glitches you find something charming enough to make you want to return. I was really hoping that the creators of the famous Ultima Online were going to deliver this (and more) in said game’s spiritual successor Shroud of the Avatar. It would at least be reasonable to assume that we’d have a functioning game from a group of experienced developers that managed to raise over a million dollars to make it.

Somehow, we ended up with a game that both looks and runs worse than something out of the early aughts, yet manages to require a higher grade of hardware that was available at that time. In other words, this game has massive optimization, graphical, mechanical, and combat issues, and that’s just the short list of offenses it commits. It’s difficult to parse just exactly how this game happened with Richard Garriott at the helm, but that’s a story for another time. Right now, I’m focusing on telling you just exactly what is wrong with Shroud of the Avatar. 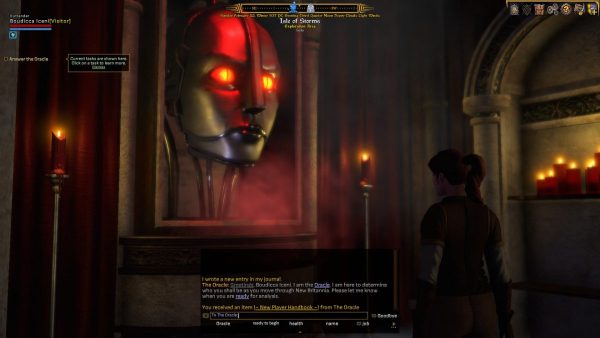 The hell is this? The hell are you?

The game starts with you as an ethereal newcomer to New Britannia. We’re not fooling around here folks; this “spiritual successor” shit is pretty on the nose. You’re greeted by Arabella who informs you that before you can enter this new world you must first meet a person deemed the Oracle. They will determine your character path in New Britannia. This more or less sounds like your opportunity to pick your class, but we’re going to get to that later.

After being given a set of menial, pointless tasks you finally get to speak to this prolific Oracle who looks like a combination of C3PO and Zordon. Through a series of preference based questions she determines the “path” that is best suited to you. In my case, it was the Path of Courage. Alternatives consist of the Path of Love and the Path of Truth. These paths will dictate your starting area. Since my path was the Path of Courage I was sent to the Battle of Highvale. This turned out to be a desecrated monastery besieged by elves, frostgeists, and technical bugs – though I suspect that last one might be unintentional. Other areas are Solace Bridge and the Blood River Massacre.

Once you enter your designated starting area you’re more or less left to your own devices. Usually I find this to be a boon in gameplay, but for Shroud of the Avatar it was more of a deterrent.

Should Have Taken That Left Turn at Albuquerque 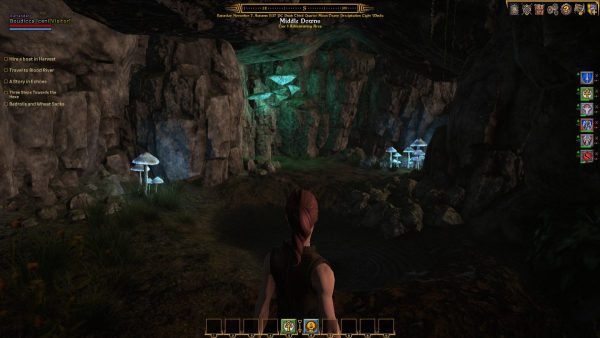 Shroud of the Avatar does not currently have a working map.

Let that sink in for a while.

If you need to know where you are, where your goal is, or where key NPCs are, good luck. Seriously. NPCs are also not labelled in the HUD until you interact with them, which wouldn’t be too bad if everyone didn’t look so damned similar! I’m still trying to find Lieutenant Simone right now to wrap up a side quest. At this point, I’m expecting to find her inside of a wall.

Want to ask where a named NPC is to another NPC? They don’t understand half the inputs you put into the text window. I’ve seriously had less pointlessly cyclical conversations with people on Twitter.

Speaking of that text window, be ready to get absolutely nowhere when dialogue is concerned. Sometimes your person of interest will just walk away mid-conversation. Sometimes a conversation ends before you have time to read the encyclopedic amount of text posted to that window. Need to revisit it? You better hope that you can, because some conversations can only be initiated once. Why? I don’t know!

You also better be prepared to wade through some of the most infuriating, flowery old timey English imaginable. Honestly, is this an MMORPG or a damned Shakespearean play? If I would have encountered one more person that used “thou” and “thee” over modern pronouns I’d have punched my computer monitor to death. Thankfully the writing team seemed to feel as strongly about this as I did, because plenty of characters eventually started speaking in modern English.

If I’m going to be honest though, this is only nitpicking. Shroud of the Avatar has some very serious problems, well beyond the dialogue windows and its lack of maps. 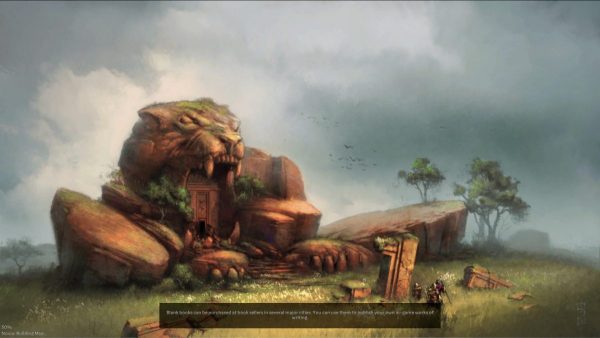 At least the load screens are pretty. Granted, they should be. You’re certainly looking at them long enough.

Nothing in Shroud of the Avatar makes a whole lot of sense. This is in part due to the fact that you’re just given too much inane information. NPCs drop pages of text on you, often in one sitting, and you’re expected to retain all of it. Yet for all the script that goes into this part of the game you still walk away feeling like you don’t understand why you’re doing the things you’re doing. In my case I was helping various refugees who had been ousted from their homes by Obsidian Elves. Why had this happened? When? How long has this been a battle between elves and humans? No idea.

Then when I left my starting area I was met with another area that lead to multiple in game regions. Some are player made towns. Most were areas that I wasn’t a high enough tier to survive in (I tried). I also couldn’t find the regions I was looking for to accomplish the main quest line because of that aforementioned map issue, so a good portion of my game was just spend running around accumulating quests I had no idea how to finish.

When I was able to fight, I was bored. Since you have to find masters to level your skills (and by that logic gain new ones), and because I can’t find anything in this game, I spent literal real world hours with only two attacks and a very weak healing spell. Thankfully I spent most of my time in one of the aforementioned “Tier 1” areas, but due to this, combat was abysmally underwhelming. I could have gotten up and walked away from my PC to return and find I’d killed everything without any effort on my part. There’s nothing tactical involved or even anything fun that looks cool. It was, to put it as plainly as possible, boring.

I Can’t Even Make A Joke Here. 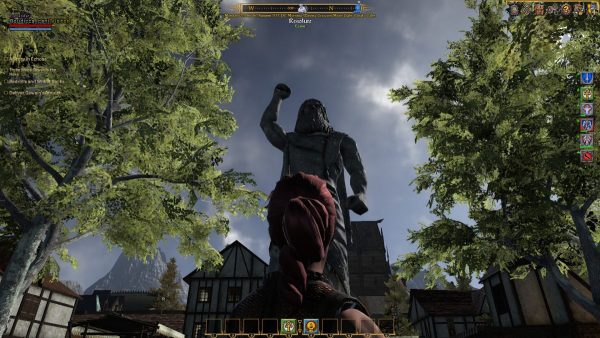 In some places it really looks like they tried.

It’s unfortunate to see what Shroud of the Avatar has become, not only because it raised so much money, but because genuinely experienced people were behind this title. I did a lot of research as I eked out this review to make sure I wasn’t missing something, and I discovered something strange. Between 2016 and 2017, this game actually looked fun! Players had content, outfits, pets, and other things that I wasn’t able to even find in my game. As it turns out, some of these things were apparently Kickstarter backer rewards, which was somewhat disappointing. However, I currently can’t imagine being more disappointed if I had been one of the backers of this project. Nearly two million dollars was raised for this game. Two. Million. Dollars. How, and more importantly, why does it look and play like a college freshman’s first attempt at making a video game? And apparently I’m not the only one. Ultima fans seem pretty flustered with this game overall and I don’t blame them.

Whatever Richard Garriott (aka Lord British) and Portalarium were trying to do here, I can’t imagine even for a moment that this was it. Perhaps Garriott is resting a tad too comfortably on his laurels to realize that this isn’t a good game, or maybe things went the way of the dodo when Garriott realized he couldn’t optimize this for both the PC and tablets/mobile like he originally wanted. It’s hard to say.

At the end of the day, I’m left with issuing a strong warning to stay far away from this game. With a $40 price point, it’s literally not worth it. As I stated at the beginning of this article, there are both older and newer games that look better and offer more bang for the players’ buck. Unless this game gets a major overhaul, I wouldn’t even give it a second glance in the Steam store.

Full disclosure: This review is based on a Steam review copy of Shroud of the Avatar given to HeyPoorPlayer by the publisher.