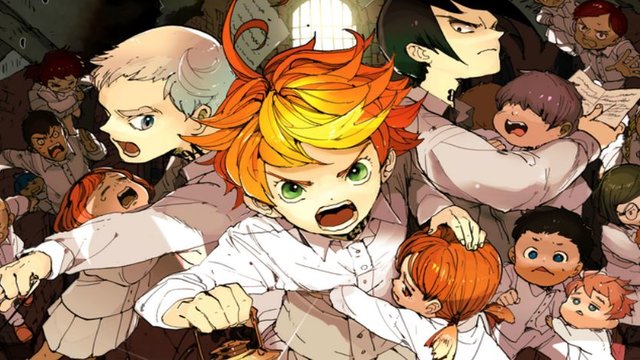 How does Kaiu Shirai keep doing it? Not that Posuka Demizu doesn’t deserve immense credit for her stunning art, but Shirai’s talent in gripping cat-and-mouse play and steady flow of shocking revelations comes across as easy as breathing, and so here we are with another stellar volume of The Promised Neverland. Opening with the conclusion of last volume’s cliffhanger and concluding with an assuredly fatal judgment, this book-ending composition does more than enrapture us: it demands our further engagement, begging us to stay tuned for the ultimate fate of these kids and how they’ll escape from a farm raising them as demon feed.

Now with Don and Gilda on their side, Emma, Norman and Ray count upon not just their aid but the secret messages left by one William Minerva, who left clues in Grace Field House’s library. Many mysteries surround this nebulous author, but his notes’ presence mean one thing: they have help from the outside, and now they’ve finally designated something of a goal following their escape — find Mr. Minerva, and unlock the true secrets of this world.

But their optimism doesn’t last for long: it’s when a most unexpected ally enters the scene that we finally break free of the kids’ perspectives and gain some much-needed answers; specifically, how this child-eating world operates. Not that Shirai spills all the beans already, of course, but The Promised Neverland isn’t just a thriller — it’s also part-mystery, and pieces such as how one becomes an orphanage’s Mom and the hierarchy between humans and demons are all part of the puzzle. Even from the very first volume we were given shocking teases into what makes the grown-ups operate the way they do, but even if we don’t have all the answers just yet, we now know what motivates the products of this unfortunate cycle: it is a world of kill or be killed, and those who survived continue chasing illusions of false bliss and comfort at the expense of others.

Such tea parties are the norm here, you understand. 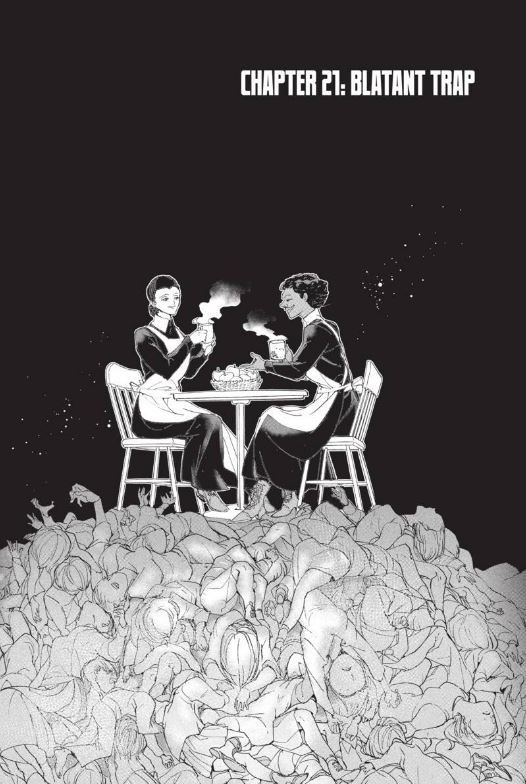 Naturally, this is not a world our trio want anything to do with, but this destructive method of survival has already been ingrained into Isabella, Sister Krone, and all the other Moms and Sisters reigning over the other orphanage plants (not to mention the enigmatic Grandma, whose sole appearance is a chilling clue towards the aforementioned hierarchy). Even as one character exits the story, while her final thoughts may reveal a subconscious desire to destroy the twisted world that created her, her final action is a counterattack to take her most hated obstacle down. Following Chapter 23’s end, we’re left with the horrifying reminder of Emma’s probable future had she remained blissfully unaware of Grace Field’s true nature.

Needless to say, Volume 3 of The Promised Neverland presents the cast at their most desperate yet: none of the characters were ever truly “safe,” but none of their respective insurances were as stable as they thought, and Isabella’s enacting of her plans force our heroes into their darkest hour. What exactly transpires is not for me to say, but the final line of this volume makes her intentions clear: even if there’s any hint of truth to Isabella’s loving facade, control is her number one priority, and for the sake of her survival, she must remind her cattle she can bend the rules any way she wishes. Unfair? Yes, as she even admits, but she, too, has been ingrained with a survival-of-the-fittest mentality, and will resort to any means necessary to live.

Still, let us not dismiss Demizu’s art: with her eye-catching demons are largely absent, her human cast and their varying countenances of despair, stoic confidence and devilish joy must steal the show. Even if Sister Krone’s design is potentially problematic, there’s no denying her unbridled wickedness isn’t the stuff of nightmares, her inability to restrain her delight at manipulating the children matching that of a psychotic killer pouncing upon their prey. The children, too, have never been at their most despondent than they are here, their constant plunges into shock culminating into the two-page whammy of a spread that demands nothing more than a gasp.

Three volumes in, and The Promised Neverland continues to stun with its masterful dealing of twists, gripping art, and what’s possibly the grimmest, most raw manga ever presented in the pages of Weekly Shonen Jump. There’s a reason it remains possibly the best series running in the magazine today: we’re scared at what we might see, but by God, do we want to know what happens next. We come in wanting more, leave wanting more, and so the weekly/bimonthly cycle continues.

Crawling a mile through early access to freedom!   It’s an ongoing and important debate whether prison is for punishment or rehabilitation. Up till now though, this debate has…