A Gated Community for Golems 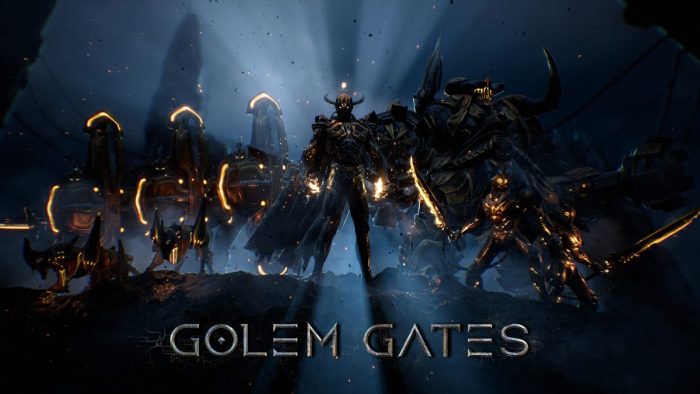 Golem Gates casts the player as The Harbinger, a powerful masked techno-mage who is summoned for the momentous task of defeating an army of evil, nefarious red golems for the greater glory of the virtuous yellow golems. Your battle to rid the land of your crimson adversaries takes the form of a Real Time Strategy title with a twist: instead of collecting resources and training units from buildings, every unit and ability comes from playing from a deck of cards. It’s an innovative concept, but innovation usually turns out to be fraught with challenges and this title is no exception.

All of the Harbinger’s abilities run off a gradually building store of energy. When you have enough energy you can play a card. Each card in your “hand” represents a different building, unit or ability you can deploy onto the field. Whereas more traditional RTS games have you gathering resources to build units, Golem Gates has you capturing energy generating control points. Since there are multiple control points on each map, this forces you to think strategically and defend them all rather than simply blobbing up your units unthinkingly. 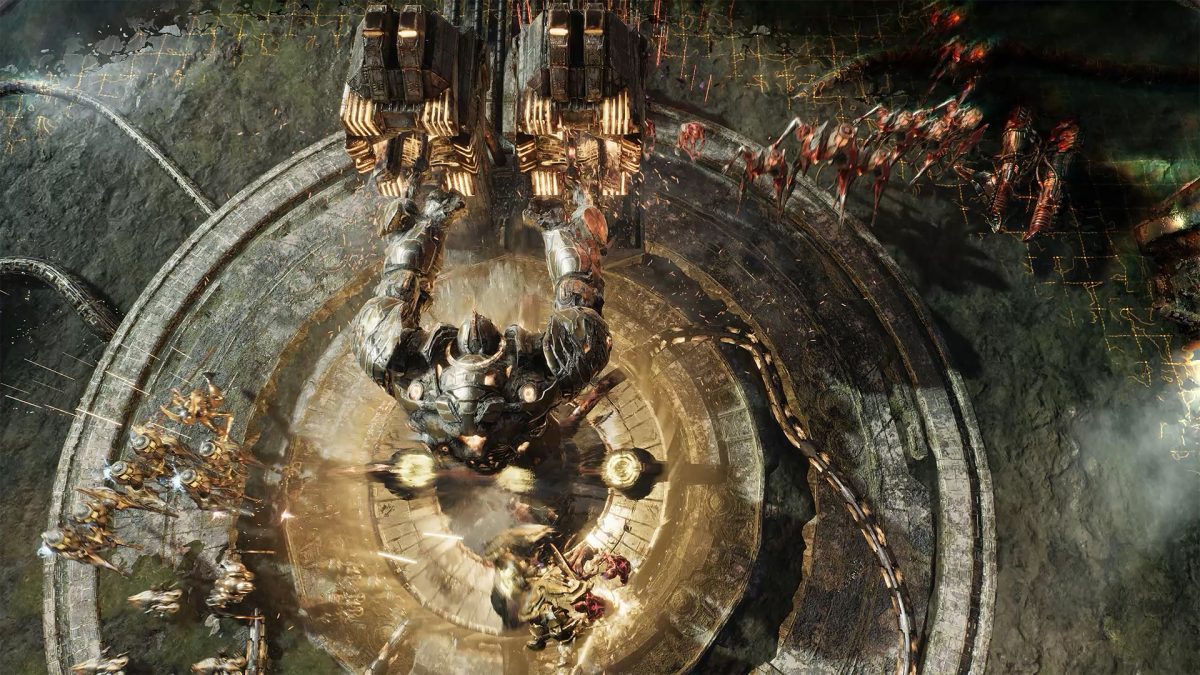 During the campaign, one of your objectives is to assemble and protect this huge golem.

The campaign has more entertainment value and replayability because each level has secret objectives to complete, which can yield you more bonus cards to add to your deck. Replacing the economic management of traditional RTS games is how you manage your deck between missions, choosing which cards to bring along and which to leave behind. It’s important to have a good balance between the different card types. Strong static defenses like turrets are important to defend control points, and they give you vision to summon units nearby (which is useful since card can’t be played in the fog of war). Likewise, it’s useful to have a fireball card handy to explode a rival army and tip a tricky battles in your favour, but aiming these abilities precisely is vital since they can hit your troops as well.

What really sets Golem Gates apart mechanically is also, sometimes, what makes it so frustrating. The randomness on how cards are drawn into your deck sometimes cuts you off from crucial strategies you need to win. Support units are crucial to maintaining large armies since the healing bots keep your armies topped up when they would otherwise be worn down by attrition. However, it’s easy to find yourself in a situation where you won’t end up drawing these crucial cards at the beginning and end up in an awkward situation where your armies are worn down early on with no way to heal them up. This resulted in a few games just being a complete bust for me as it’s very difficult to recover from a loss of early game momentum. 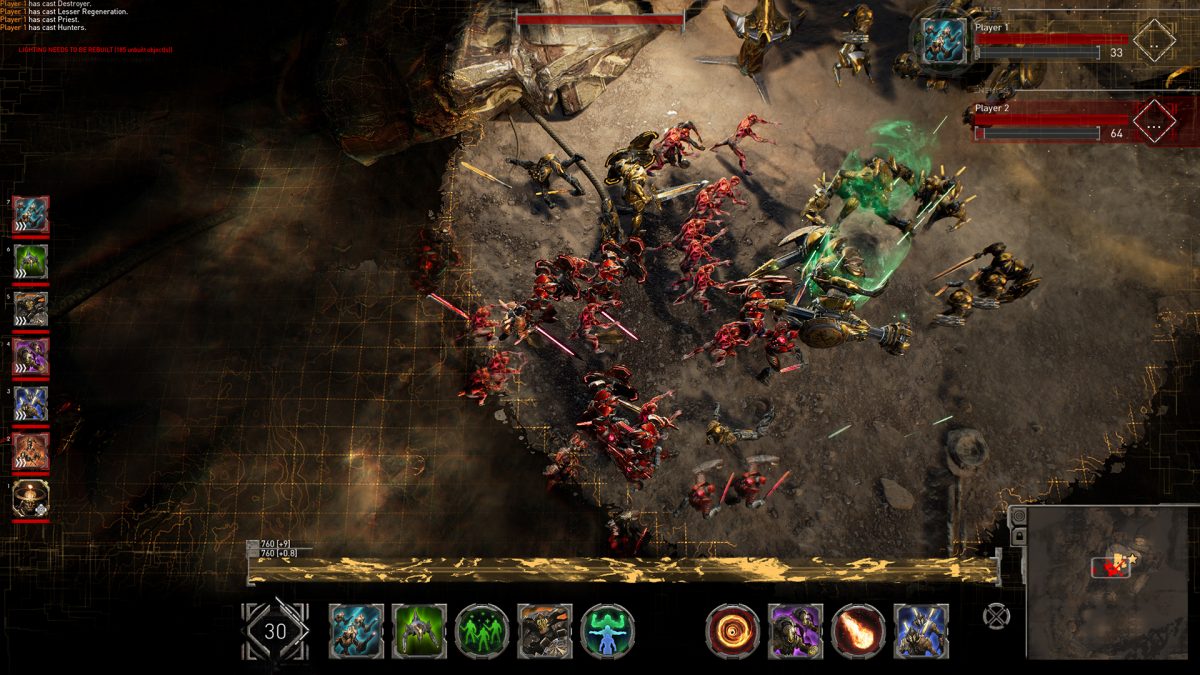 Keeping track of this lively lot is no mean feat!

What can be even more frustrating is how quickly your army can be wiped out in the blink of an eye. Just one fireball card can spell the end of you, instantly destroying your support units and weakening your units, with there being little in the way of anything you can do to defend. Oftentimes I’d repeat levels in the campaign over again and my success or failure wasn’t determined by trying a new strategy or playing more skillfully, but by the luck of what cards I had in my hand.

Golem Gates can demand a fair amount of micromanagement skills in combat. On top of controlling your units and keeping them from strolling into range of death-dealing traps or turrets, you’ve also got to play mid-battle cards to give you an edge. Examples of the type of clutch cards you can play include the pacifist skill, which can nullify an opposing unit’s attacks completely for a limited time.

You’ll gain access to hero units or other units with unique abilities. The detonator units, for example, can dash forward and self-destruct for devastating effect. In this way, they’re akin to the exploding banelings in Starcraft 2. However they require significantly more three clicks more worth of micromanagement: you have to select them individually, activate their ability and select a target, which can be punishingly fiddly in the middle of a tense battle – where you’re already desperately babysitting your crucial support units so they don’t wander into danger and die. Whereas similar games mix a player’s macromanagement of economy with micromanagement of units, Golem Gates lists towards demanding the latter to a punishing degree, which can be problematic.

You’ll get access to some massive golems later in the game.

What the Golem Gates campaign lacks is much in the way of a solid storyline. The inter-mission cutscenes seems to establish that the Harbinger is under the command of a whispery-voiced giant glowy golden orb with a vague commandment to “purge” the “infection” of the red golems. The Harbinger exchanges vague threats and cryptic innuendos with warbly-voiced adversarial techno-mages, and that pretty much sums up the storyline. Having cut my RTS teeth on the campy, crazy joys of the Command and Conquer series, I couldn’t help but feel the campaign having such a glib, understated narrative between missions was something of a missed opportunity.

Golem Gates has a powerfully oppressive atmosphere, which distinguishes it nicely from many of its ilk. The grimy, sludgy synthwave of the music mirrors the equally washed out, grey industrial wastelands each battle takes place on. Combined with the narration of the unfeeling, whispery voiced narrator telling you about your heroes dying or you control points being lost everything feels suitably hopeless and bleak. Though distinctive, the ambiance of Golem Gates was so omnipresently grim I actually sometimes felt a little depressed playing it. It’s definitely a title you should give a miss if you’re recovering from a breakup.

So, were you bluffing?

Golem Gates as an intriguing marriage of real time strategy and card battler. There’s an artful simplicity to it in how economic management is discarded (no pun intended) in favour of on-the-spot decision making of how to play the hand you’re dealt. The randomness of the central card-dealing mechanic can undermine your ability to play how you want, which is an annoyance if you have a pre-planned strategy but a boon if you’re happy to adapt to the whims of chance. The story lacks much depth, but that’s acceptable if you’re looking for an innovative new variation on the card-battler phenomenon to while away the time. In conclusion: it’s not a royal flush, but it’s at least a techno-magical two pair.