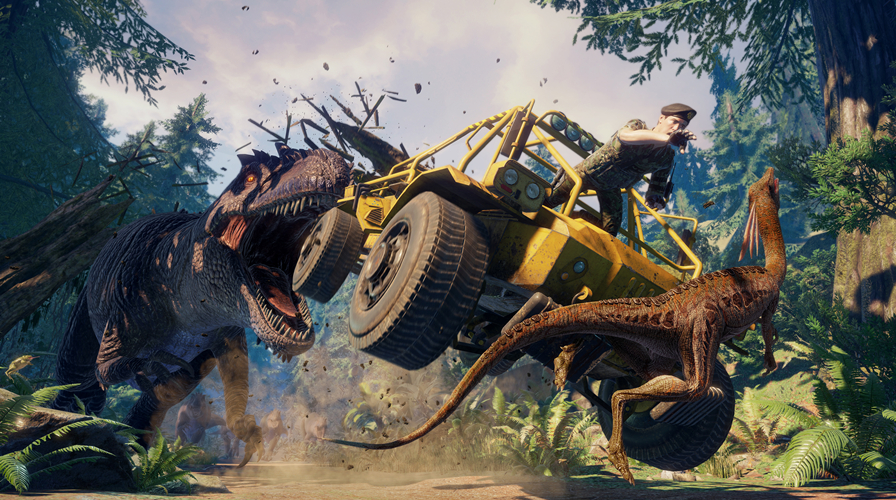 On paper, Ark Park seems like the perfect VR experience. A spin-off of Wildcard Studio’s massively successful survival title, it plops players onto a lush island teeming with dinosaurs as they embark on what should be the most thrilling safari this side of Jurassic Park. Featuring three different game modes, each with their own unique premise, you’d think there’d be plenty to see and do in the great, dino-filled outdoors. Sadly, that couldn’t be further from the truth. The final product is a paper-thin experience that feels firmly rooted in the prehistoric era of VR gaming.

I have to admit, the game’s opening sequence seemed promising. My journey began with a scenic trip aboard a Maglev train racing above a massive expanse of water. Watching prehistoric beasts frolic in the placid waters and futuristic jets soar above really pulled me in. What I didn’t know then was that this brief commute would ultimately be my favorite moment in Ark Park. After disembarking, I stepped into the game’s exhibition hall where I was able to tinker with a handful of dinosaur holograms, toy around with their animations, and, well…that’s about it.

Once I was done my brief tour, any sense of grandeur and mystery that had been established up to that point was then squandered with a trio of modes that pack all of the depth of your favorite mobile phone game. 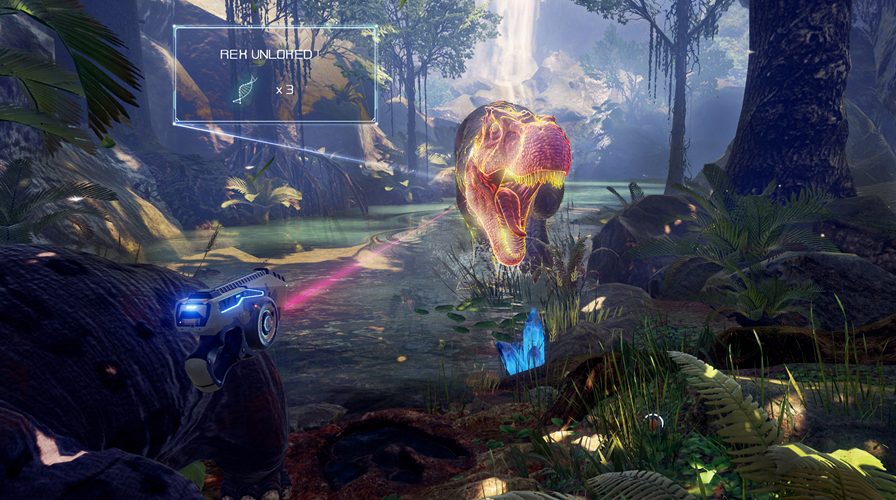 Collecting dinosaur genes is a bit like Pokemon Snap, but not nearly as fun.

Ark: Survival Evolved is a game with a heavy focus on crafting. That said, it should come as no surprise that this element has been transplanted into Ark Park’s package. Crafting is done at the facility, a small base camp where you can fabricate new gear with the items you collect in the game’s other modes (more on those later), engage in target shooting, and hatch eggs in hopes of taming your own pet dinosaur. You can also spend genes – basically experience you earn for discovering new creatures or shooting them in the face – to unlock new blueprints for more powerful tools and weaponry.

While the idea of a base camp is cool and all, it doesn’t really serve much of a purpose outside of letting you fabricate gear and play dress-up with your custom built avatar. Honestly, most of the functions here could have just as easily been handled via in-game menus. Stopping back at base camp to spend genes and craft new items quickly becomes tedious and only really pads the game’s already rather anemic list of distractions.

Exploration Mode is the next activity you can dive into. This allows you to choose from a small handful of locales to scan creatures and harvest materials that can be used in crafting back at the facility. Scanning the wildlife is strangely similar to 1999’s N64 release Pokémon Snap, as you’ll have to quickly zap passing dinos to catalog them before you lose your small window of opportunity.

The problem is scanning often feels imprecise, regardless of whether you’re playing with the motion controllers or DualShock 4, which ensures these segments quickly devolve into frustration as you replay each stage multiple times in hopes of your scanner registering your targets. Harvesting is simple enough, at least. All you need to do is clumsily swing your strangely primitive pickax until the tree or rock you’re harvesting crumbles. That’s really all there is to it.

Caveman With A Shotgun 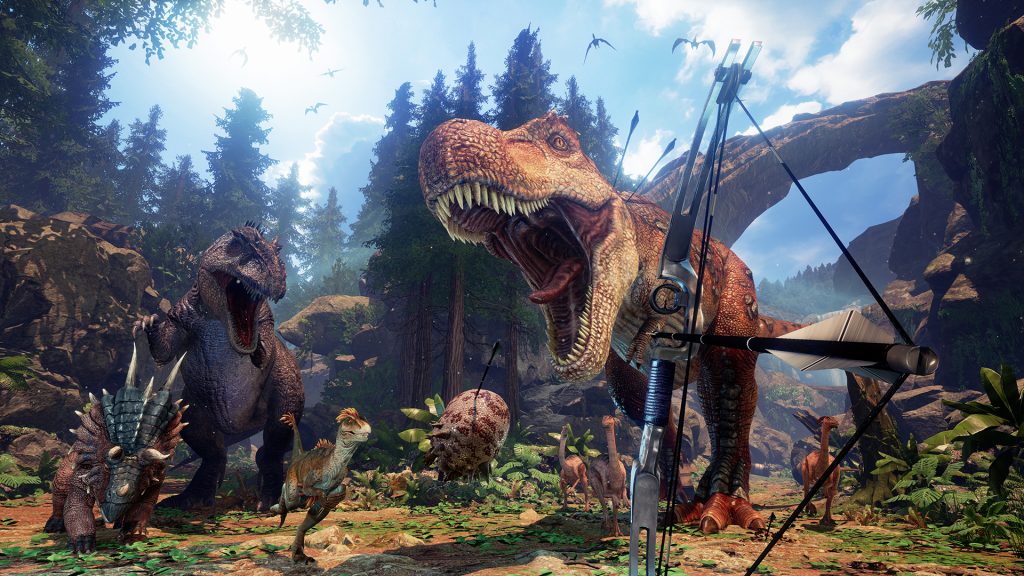 Now this looks awesome. Too bad it’s not at all representative of the Ark Park’s final product.

If all of this sounded to pacifistic for you, there’s also a battle mode where you beat back waves of dinosaurs as they attempt to destroy a mind control machine. This plays like virtually every other wave shooter on the PSVR. However, it’s decidedly less polished than most. The once-docile dinos never even bother to attack you directly, as they solely focus on battering the machine behind you. And even the most colossal creatures only take a couple of bullets to dispatch – save for the bosses, who are total bullet sponges. This makes for a shooter that feels totally toothless and gives you little incentive to even bother upping your arsenal, as the starting pistol is perfectly capable of getting the job done.

To make matters worse, this mode also offers hardly enough content to be called a mini-game. It features a whopping two arenas set at various times of the day. Though this may be a form of mercy on the part of Snail Games, because if you’re like me you’ll probably be hoping for a meteor’s impact to put you out of your misery by the time you reach this mode’s conclusion. 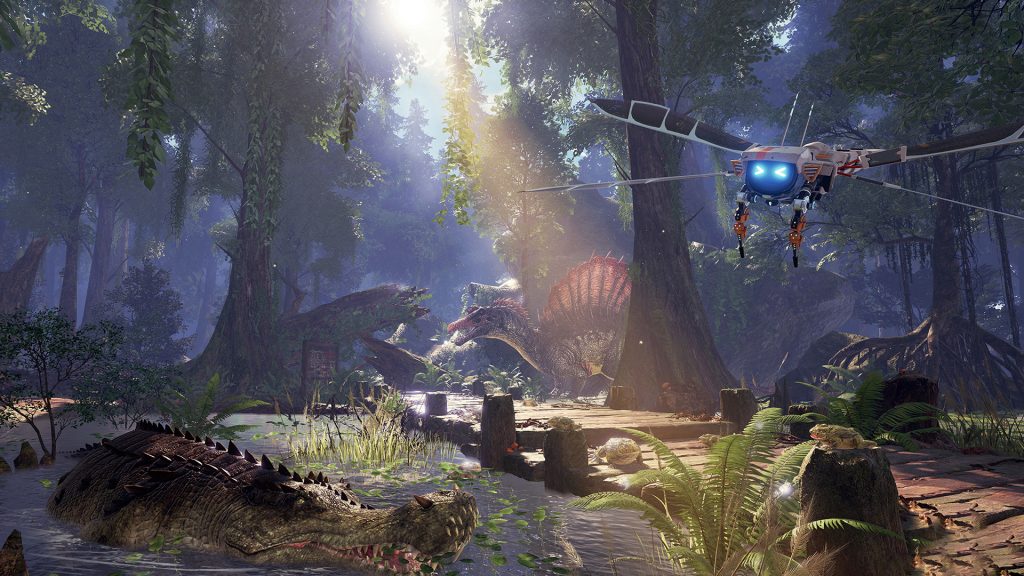 It’s a jungle out there.

You’d be forgiven if you thought this lack of meaningful content was Ark Park’s biggest flaw. However, you’d be sorely mistaken. What’s even more maddening is the game’s completely maddening control scheme, which makes performing even the most basic functions incredibly frustrating. The game only features teleport locomotion. And while that isn’t my preferred way to play games in VR, I can deal with that. However, rather than use a handy teleportation arc like that most games, instead your warp point is mapped to the center of the screen. This means you’ll have to constantly crane your neck in awkward ways to go where you hope to: a feat that becomes downright painful when you’re standing close to a terminal you want to interact with. There’s also no smooth rotation to be had, which when combined with the clumsy locomotion, make for an overwhelmingly clunky experience.

You don’t just use your head to teleport, either. It’s also used for aiming and interacting with objects when playing with the DualShock 4, which syphons pretty much any fun out of the shooter and exploration segments. Hell, you even have to look at items in your inventory to interact with them. The problem is they’re positioned so close to you that I pretty much found myself burying my chin into my collar bone whenever I wanted to use my gun or scanner. Sounds fun, right? Yeah, I didn’t think so either.

It doesn’t really matter if you play Ark Park with the PlayStation Move controllers or DualShock 4. Whatever you choose, you’re in for an awkward and uncomfortable experience. The only real benefit the motion controls provide is when aiming your guns in the shooter or lazily swinging your pick in exploration mode. So, if you want to be slightly more immersed in the monotony, I’d say play with the Move controllers. Otherwise a standard controller is perfectly serviceable.

Ark Park is not a good game. In fact, it’s hardly a game at all. It’s a cumbersome mix of hackneyed mechanics that fails to deliver either a competent edutainment experience or engaging gameplay. Hell, the game comes with a multiplayer mode that you can choose…that hasn’t even been implemented yet! Having said that, it’s hard to see Ark Park’s $50 asking price as anything short of insulting.

Given its source material, Ark Park could have been an outstanding entry in the PSVR’s catalog. Unfortunately, Snail Games spectacularly squandered this opportunity to deliver something truly deserving of an extinction-level event.

Full disclosure: This review is based on a copy of Ark Park given to Hey Poor Player by the publisher. 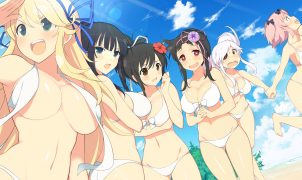