Can Kirby’s friends make this his best adventure yet? 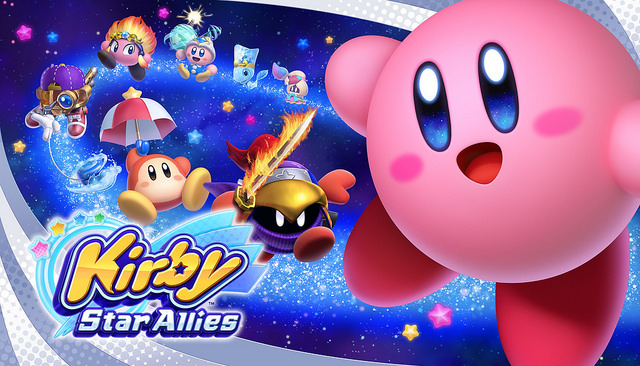 Since 2011’s arrival of Kirby’s Return to Dream Land, the pink puff has been experiencing something of a Golden Age — the Wii game and both 3DS entries (Triple Deluxe and Planet Robobot) were the first post-Masahiro Sakurai iterations to successfully build upon (and arguably even surpass) the formula he left behind. At last, HAL Laboratory had mastered his design ethic for Kirby games being easily approachable, but difficult to fully master (beating Planet Robobot‘s True Arena is no small feat!) all the while fattening them up with compelling side-content (Kirby Fighters!). With Kirby Star Allies for Nintendo Switch appearing to be more of the same, it seemed the status quo would truck on unchallenged.

Or…not? To say Kirby Star Allies fails in adhering to the series’ appeal would be a gross misunderstanding — the world and characters remain sickeningly sweet, it grants generous handicaps to ease the fledgling gamer along, and most of all, it’s great fun to play — and yet, there’s something missing in its DNA. In the presence of exciting Copy Abilities and what’s easily the most unique method of progression in years, I say this with some regret, but that Kirby’s latest adventure comes up short is an undeniable feeling I’ve been wrestling with, and it must be called to attention. 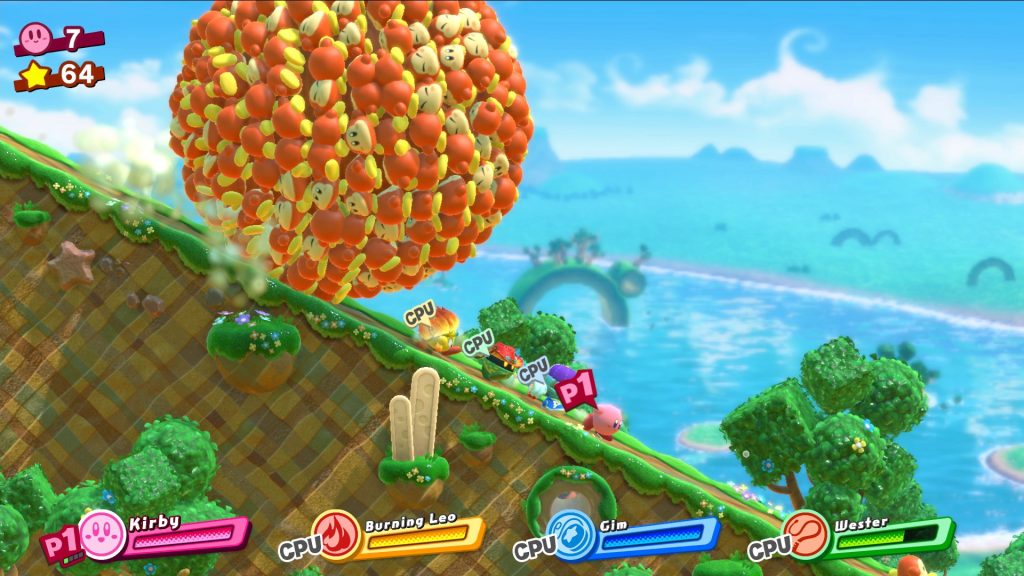 Star Allies makes an initially strong case in reviving what’s perhaps the series’ most beloved mechanic: Kirby Super Star‘s partner system, wherein Kirby’s former foes team up to rampage about. As opposed to two-player co-op, however, up to four players can join Kirby’s journey (meaning, Kirby and three pals). While this isn’t the first time we’ve had four-player co-op (that would be 2002’s Nightmare in Dream Land), returning faces such as Burnin’ Leo, Broom Hatter, Gim and even Chef Kawasaki render this game’s co-op the most dynamic yet, as Kirby can change partners on a dime — a process done by throwing hearts as enemies — to solve puzzles or just for kicks. The result is an explosion of activity and colors, with the gang plowing through hordes and fusing their powers together (Sizzle Bomb! Zap Staff! Curling Stone!)

All good fun, but its application to level design is where things get shaky. Star Allies highlights the partner system as its main feature, but this recycled idea is hardly as innovative or organic as this past decade’s Super Abilities or Robobots, and so a weary sense of familiarity arises. When considering how HAL previously pulled off those stellar concepts, I can only assume concessions were made to accommodate the four-player feature — I think of how Return to Dream Land‘s Super Abilities were exclusive only to one player (and even then, only to Kirby), and perhaps HAL wanted to balance the playing field in these more simplified levels. When the game forces the team to unleash Friend Train and Friend Wheel maneuvers to bulldoze the opposition, it is thrilling and interesting; when we’re solving easier-than-usual puzzles and cutting through bosses like butter, we can’t help but feel we’ve done this before.

(Still, credit’s due where credit’s due — the game builds off the level-ending bosses we first witnessed in Triple Deluxe and was further refined in Planet Robobot; at the very least, it’s enough to make the final world the rollercoaster it is, which brings me to my next point… 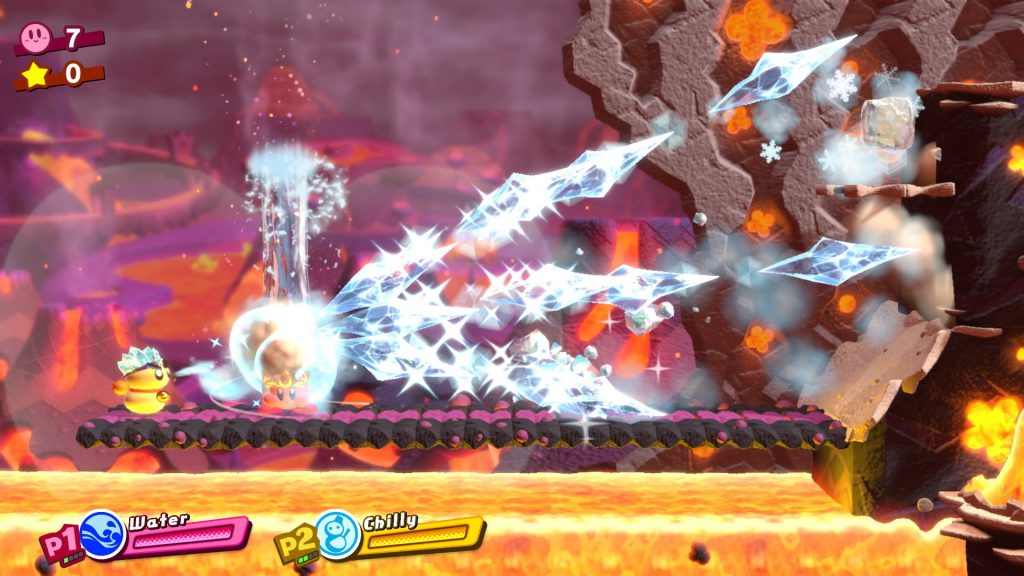 The world progression, too, plays a part, and I suspect it may be the biggest factor of all. Without getting into spoilers, how the game contextually frames Kirby and co. forging ahead is easily the series’ most ambitious; unfortunately, the low world count undermines any such grand presentation, and that’s especially a shame given the vast scope of the final world.  Fans may be quick to point out Star Allies possesses the most levels of the past seven years of Kirby games — just over 40, in fact — but when considering that half of those are optional EX stages or brief boss stages, not even one of the most rousing final boss fights in series history can stave off the feeling of “that’s it?”

Even the sub-games offer a mixed selection; for instance, Star Slam Heroes and Chop Champs may have been entertaining time-wasters in more meatier offerings, but their center-stage treatment render these brief mini-games one-and-done affairs. Meanwhile, The Ultimate Choice taking inspiration from Kid Icarus: Uprising‘s Fiend’s Cauldron difficulty slider makes for an interesting Arena replacement, but Guest Star ???? Star Allies Go! (couldn’t they come up with a more intuitive name?) asks a little much of us — this game’s equivalent of Meta Knightmare and Dededetour, whereas those side-adventures starred Kirby’s arch-rivals undertaking their own singular quests, Guest Star expects completionists to play through an abridged hour-long version of the main game with every single ally. Not that we must do it with everyone to unlock things — just once is enough — (and with my dream of 100% completion for the entire Kirby library, you better damn believe I’ll force myself to do this — at a reasonable pace, that is!). 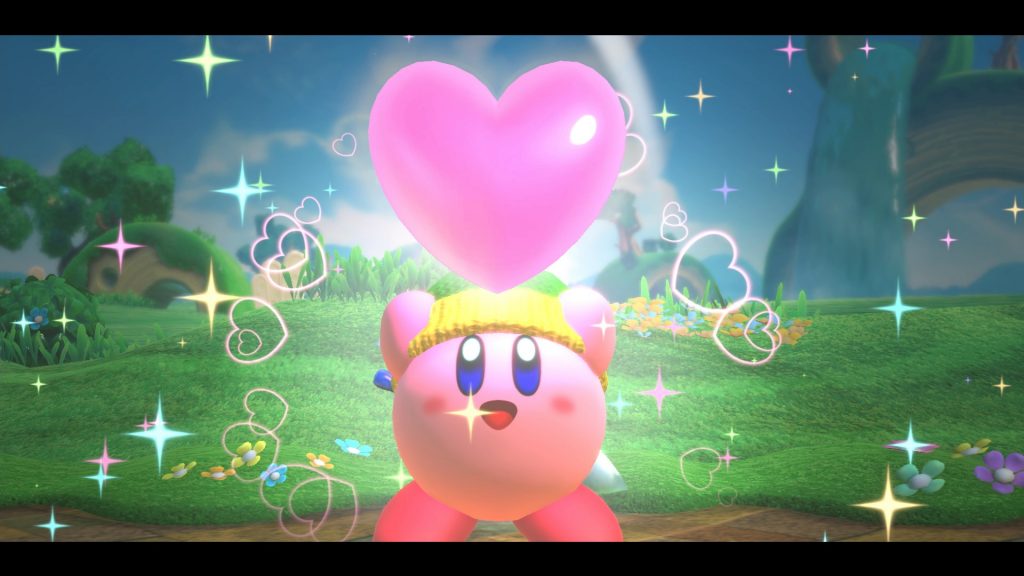 Believe me when I say I really don’t want to be this hard on Star Allies, especially when the Copy Abilities are still as fun as ever; in particular, the fusion upgrades via Friend Abilities. Unlike Squeak Squad‘s half-baked take on the concept, it’s not only relevant to level design but wonderfully fun to mix-and-match as old favorites are re-imagined in flashy new ways, be it celebrating Yo-Yo’s return as a spinning surge of lightning or grinning in sadistic glee as Cutter — an ability I never paid much attention to — slices about as a flaming maelstrom of death. Meanwhile, Staff, Spider and Art are all great additions to the Copy Ability pantheon, with Staff stealing the show with its pogo-stick antics and long-range pummel combos shredding your foes (all the more fun when combined with Friend Abilities, you understand).

And if we must praise the game on content, there’s no other choice than the unlockable puzzle pieces. True, having only one special collectible per level may be a downgrade, but the abundance of regular pieces in each level make the one case for replay value, an addiction born in discovering what games shall be depicted in eight exceptional pictures (all designed by special guests; Nintendo scholars like myself may recognize Benimaru “Ashura” Itoh, as well as some other Pokémon-related folks).

Still, it’s not enough when knowing Kirby Star Allies could have been more. The combat is there and Kirby’s world is still as luscious as ever, but the short length, relative lack of content and uninspired level design hold back what’s otherwise a solid title. Kirby’s directive in just having a good time never ceases to warm our hearts, yet when considering the high standard previously established in this Golden Age, that may not be good enough anymore.

Full disclosure: This review is based on a retail copy of Kirby Star Allies. 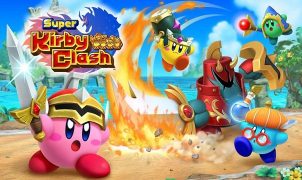 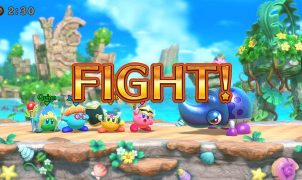