Pat these good boys asleep in this Wolfenstein 3D mod 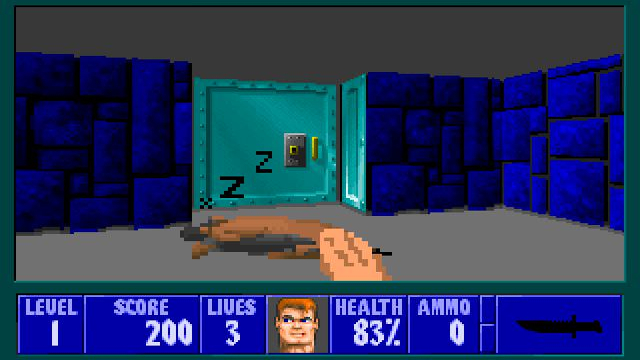 Now THIS is a superior Wolfenstein 3D mod.

Who knew that this Wolfenstein 3D mod would make the original game, (released in 1992) that much better? In the original Wolfenstein 3D when you come across a pack of hungry, Nazi-bred dogs, you sadly have to take out your trusty shotgun and shoot the poor canines to smithereens. And while sure, they’re the ones attacking you, but they don’t know that their Nazi-bred dogs, now do they? It all just seems a tad unfair…

Thankfully the creator, barsk, of the ‘Return to Castle Woofenstein’ (also known as ‘Woof3d’) mod couldn’t agree more. In a description of the mod, barsk writes that “there’s a big ol’ castle full of dogs wanting pats and you’re the one to pet them. Sorry, they jump up on you, I hope you don’t mind dog paw prints on your jeans. Just pat them and they’ll fall asleep pretty quick.” So, you may be thinking how you can possibly pat all these dogs when there are Nazi’s shooting at you at every corner? You don’t have to worry about that either. The game completely rids itself of the Nazi’s, leaving you in your very own ‘pet-the-dog’ simulator. Sounds like heaven.

You’d be forgiven for feeling a little confused on how this can be considered a game without much fighting involved, but Barsk has that under control too. What they failed to mention is that in these loveable canine’s euphoria of jumping up you to give you all the affection, some of them can still be a little enthusiastic and kill you – with kindness, though! It’s kind of realistic. Kind of.

While a mod, the install doesn’t require a copy of Wolf3D. However, you will need DOSBox, but if you don’t have it, the .zip file on the itch.io page has it bundled in.

Not sure where to find it? Check out the Wolfenstein 3D mod here.