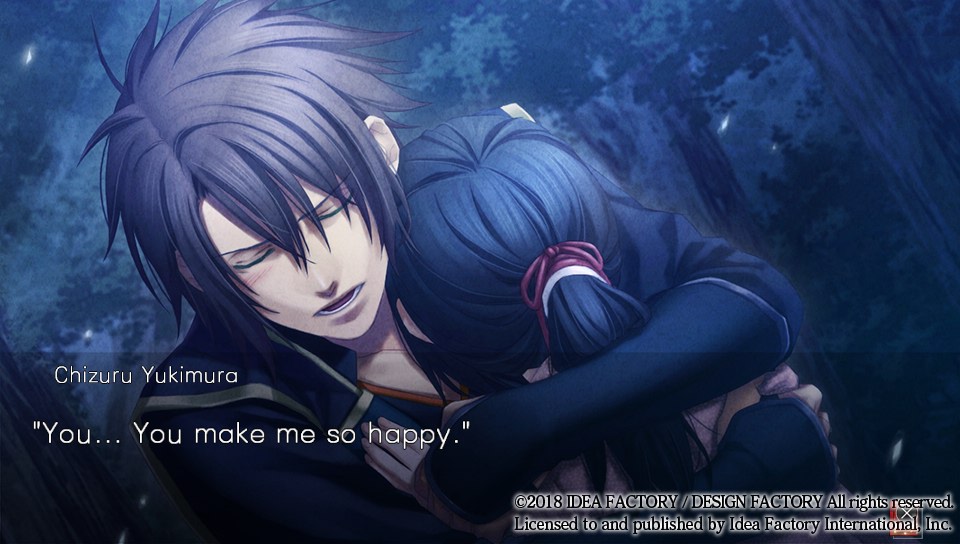 Last year, I was plunged into the world of Otome visual novels with Hakuoki: Kyoto Winds. Needless to say I was out of my element, and I wasn’t quite sure what to expect. But I’m not sure that anything I could have conjured up would have prepared me for what I was met with. No sooner had I started the game and assumed the guise of Chizuru Yukimura was I thrust into the middle of a historically inspired story of danger, heroism, comradely, and, eventually, love. It was exciting. It was captivating. But, most of all, it… ended on a cliffhanger that drove me absolutely mad. We just got to the good part! And now you want me to wait? Sheesh, talk about toying with my expectations!

Fortunately, my chance to see things through with the Shinsengumi finally arrived in the form of Hakuoki: Edo Blossoms. And boy, was it definitely worth the wait. Not only does this game provide a satisfying conclusion (more like a dozen or so satisfying conclusions, actually) to the Hakuoki duology, but it does so in a clever and intuitive way that manages avoid negating the work put forth in the first game while still ultimately putting the choice in the hands of the players. It’s truly a testament to its own genre. 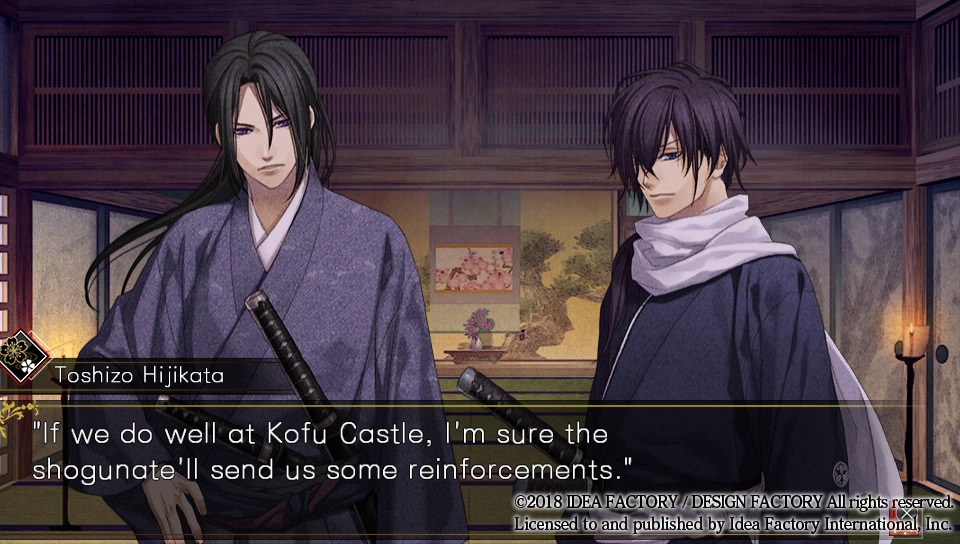 Where you pick up in Edo Blossoms differs greatly depending upon your route.

This is normally the part of the review where I lightly gloss over the game’s story. Considering the fact that Edo Blossoms is literally all story, you would think that this would be easy. But it really isn’t. And that’s all due to route branching. In the first game, Kyoto Winds, things always begin in the same way. The story is relatively concurrent, branching only at the very end after you’ve committed to the Shinsengumi sweetheart or dreamy demon of your choice. And therein lies my dilemma.

Edo Blossoms, being a direct sequel, already begins in a “branched out” state. Rather than needing to seek out and woo your favorite samur-guy all over again, Edo Winds offers players 13 completely different stories, each focusing on a different romance (and one route where you fly solo). Although certain major events from Kyoto Winds carry into each story — such as the discovery of Chizuru’s Demon lineage, and the politically fueled warfare ravaging Japan — many of Edo Blossom‘s narrative elements are more whimsical. Things like relationships between and temperament of characters, which characters are Furies, and, in some cases, which characters are even alive all differ depending upon who you choose to begin the story with. While these narrative changes do fall in-line with their respective Kyoto Winds branches, it can make things a tad confusing if you aren’t paying attention. 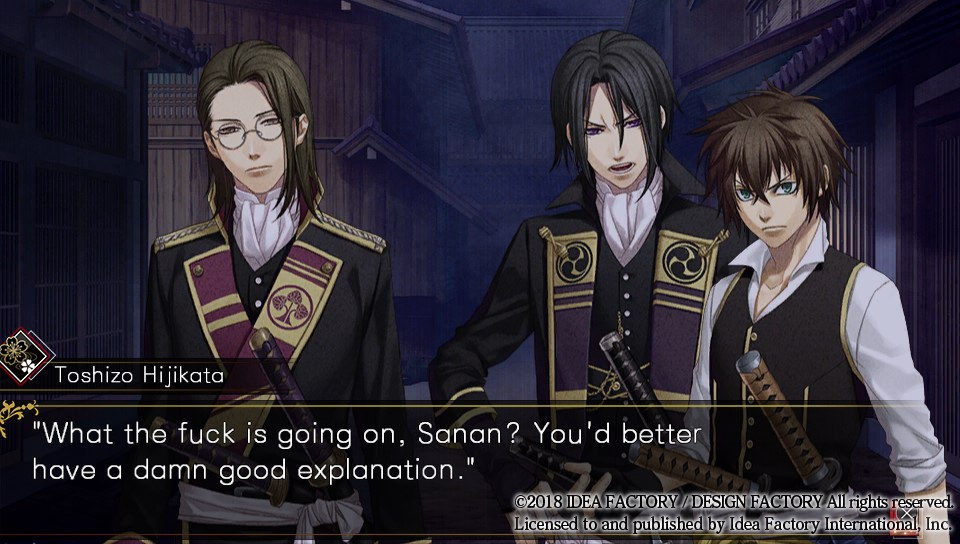 Of course, while confusing in the beginning, Edo Blossoms‘ decision to severely branch out each story pays off majorly in the end. Harshly contrasting the setup of Kyoto Winds, Edo Blossoms isn’t a singular story with multiple endings. Rather, it contains multiple stories with multiple endings. With few exceptions in between, events that occur within each story never line up. And, in many cases, events occurring within one story may never occur at all within the other. This ultimately serves to create a unique, player-driven story, and does wonders for the game’s replayability. The fact that this game successful presents its players with 13 separate stories, all of which are engaging and detailed, is nothing short of astounding. Even by visual novel standards.

The Decision You Chosu to Make 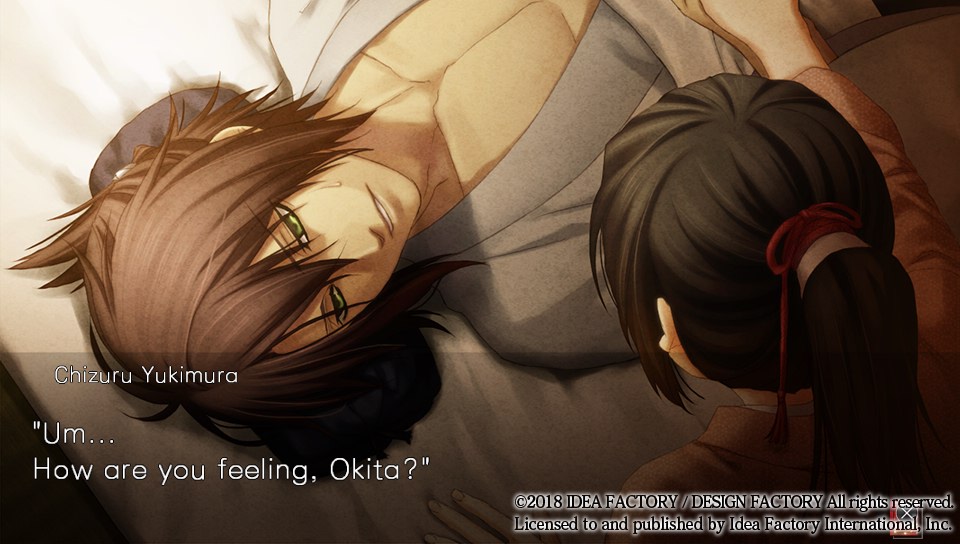 Edo Blossoms focuses on peeling back the layers of battle-harden toughness enshrouding each of the Shinsengumi.

Despite taking a noticeably different narrative approach, Edo Blossoms still plays similarly to its predecessor. The overarching goal of the game is to reach the end of the story without messing up too badly. The major difference this time around, as I’ve already mentioned, is the fact that you aren’t simultaneously vying for the attention of 10+ suitors at the same time. Rather, the only person you’re trying to win over is the one you picked in the beginning. It’s literally impossible to win over anyone else, as each story specifically relates to whichever character you have chosen. And, since much of the Shinsengumi has split up, you usually don’t see many other characters anyway.

The game’s decision to segment each story so drastically ends up doing two primary things. First and foremost, it makes the story shorter. Without needing to give players equal opportunity to hunt down each and every hunk, the game ends up skimping out on things like side-events, exposition, and the like. This, in turn, creates a story focused almost entirely on the main plot, and cuts to the chase more quickly. Personally, I kind of enjoy filler. I was sad to see that there wasn’t much of that going on this time. I thought that the numerous lighthearted events within Kyoto Winds helped you to get to know each character better. It was nice seeing the friendlier side of an otherwise deadly serious group of warriors. I do understand that this game is dealing with an abundance of differing storylines, however. It’s a change that at least makes sense. 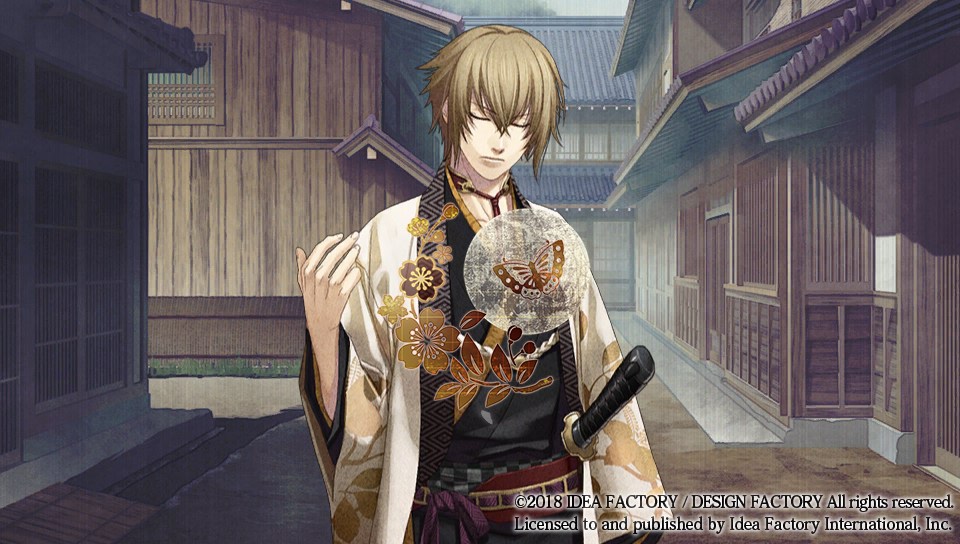 Looks like even Demons aren’t immune to getting butterflies, eh?

The second change is in the romance department. Namely the fact that it’s a little more simplistic this time around. Due once again to the fact that you’re only dealing with one romantic interest per route, Edo Blossoms takes almost all of the guesswork out of finding love. On one hand, this is very welcome. I remember having difficulty triggering all of the flags for certain character paths in Kyoto Winds. Especially those involving the game’s less prominent characters. The ability to ensure that you’re with the right character from the get-go frees up the potential frustration caused by locking yourself into the wrong path.

This also takes some of the fun out of it, however. Frustrating as it can be, doing your best to lock yourself into a specific path and pulling it off successfully it always a good feeling. There’s a sense of accomplishement that comes with finally being able to win the right person over, especially following a series of failed attempts Once again however, I do understand that that isn’t necessarily feasible in a game like Edo Blossoms. I think that the game handles romances in the most appropriate ways possible, given what it’s working with. 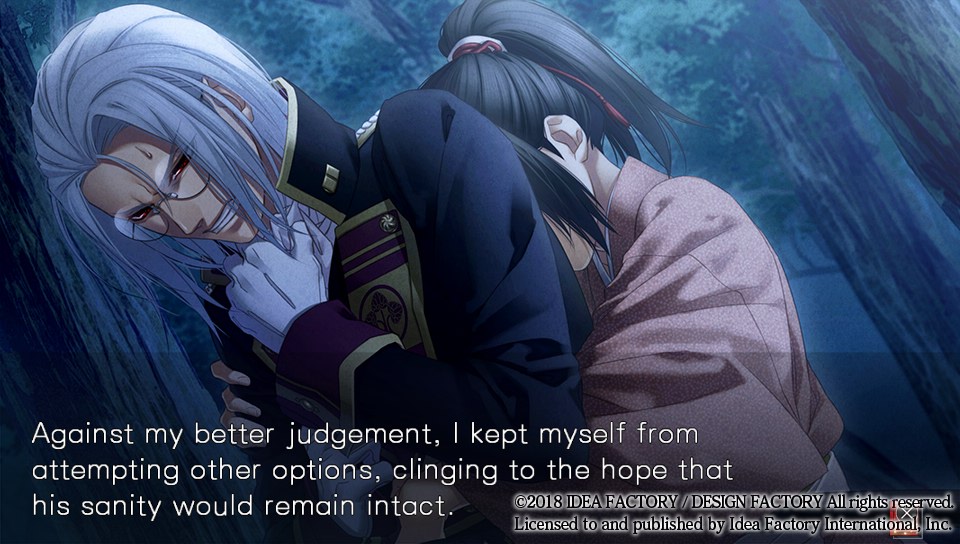 New to Edo Blossoms is corruption. A mechanic involved specifically with love interests who have become Furies (which is most of them), corruption indicates how overtaken with bloodlust a character has become. Working similarly to romance, corruption levels rise or fall depending upon how certain situations are handled. Unlike with romance, however, corruption isn’t something that you want a lot of. In fact, reaching critical levels of corruption generally leads to Chizuru dying — something previously foreign to Hakuoki. Admittedly, the corruption mechanic isn’t something that runs too deep. So long as you pay attention to it, it’s easy to avoid meeting a gruesome fate. Still, it’s an addition that’s not only nice from a mechanical standpoint, but one that blends seamlessly into the narrative as well. 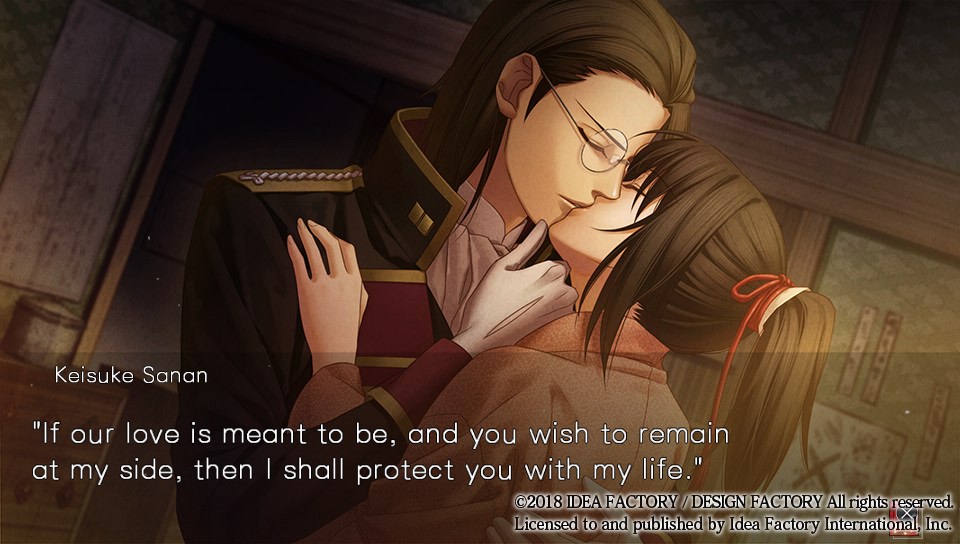 As fantastic as the storytelling in this game is, I’d be remiss if I didn’t mention its numerous sights and sounds. All of the artistic assets within Kyoto Winds return triumphantly in Edo Blossoms, with the game sporting wonderfully professional Japanese voice acting, and one of the best VN soundtracks that I’ve heard in quite some time. Most impressive however, is its art. While character portraits and CGs were already great before, Edo Blossoms takes visuals to new heights. This is (in my opinion, anyway) thanks to the inclusion of a more intimate lineup of CGs — all of which boldly and accurately reflect the feelings of Chizuru and those around her. Even when I knew that a smooch was inbound, seeing it happen on-screen was always more than enough to put a smile on my face.

An Era to Be Remembered

As far as visual novels go, I can’t recommend this one enough. Not only does Hakuoki: Edo Blossoms serve as a fitting in for the Hakuoki duology, but it does so in a way which allows it to step out from under the shadow of its predecessor, and shine all on its own. Boasting a very likeable pre-established cast, 13 unique and exciting stories, and gorgeous audio and visuals, you would be a fool not to want to visit the Shinsengumi again.

Full disclosure: This review is based on a copy of Hakuoki: Edo Blossoms given to Hey Poor Player by the publisher. 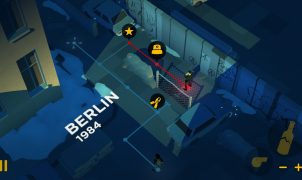