One thing’s for sure, you can’t say Warhorse Studios is lacking ambition. This is apparent from the moment you first step foot onto the detailed vision of medieval Europe in Kingdom Come: Deliverance. From its bustling cities the satisfying complexity of its swordplay, the Prague-based developer has done a masterful job of immersing the player in an immersive, believable world. A land with its own complex social hierarchy, where armies clash, brigands raid, and the fate of entire kingdoms is decided through bloody war and political intrigue.

When everything is working without a hitch, Kingdom Come: Deliverance easily stands as one of the most immersive games I’ve played in recent memory. The world is massive and a joy to explore. Simply strolling through dense forests or riding on horseback over rolling, verdant hills is a sight to behold that will take even the most jaded gamer’s breath away. The problem is that despite the strong first impression it leaves on the player, it’s riddled with some crippling bugs that constantly get in the way of an otherwise outstanding RPG.

Kingdom Come, Thy Will Be Done 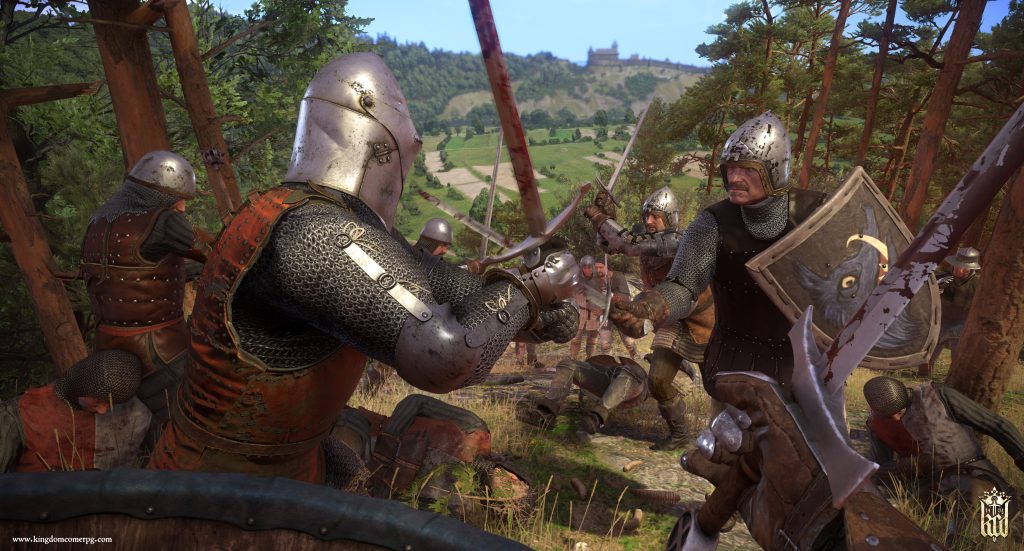 Running towards an enemy while covered in the blood of their comrades is a good way to put the fear in them.

Before we get to that though, here’s a rundown of what Kingdom Come: Deliverance is all about. The story begins in the year 1403 century in the small hamlet of Skalitz, part of the Holy Roman Empire. Players assume the role of Henry, the son of a skilled blacksmith. One day begins like any other, as Henry runs errands around town for his father in preparation to craft his finest sword yet for a local lord. However, things quickly take a turn for the worse. Hungarian king Sigismund’s army, aided by a band of skilled Cuman mercenaries, ransacks Skalitz and butchers nearly the entire town – including Henry’s family.

After barely escaping with his head on his shoulders, Henry steals a horse and makes a hasty escape to a nearby town. From here, the young blacksmith’s son must become a skilled warrior and exact his revenge against the ones who stole everything from him.

Revenge stories are as old as time. Still, Kingdom Come: Deliverance manages to stand out thanks to its exceptional writing and standout performances from its cast of characters, many of whom are lifted straight from the pages of history. While many open world RPGs tend to lose their focus in favor of mountains of side quests and distractions, that’s not the case here. Warhorse Studio succeeds in delivering a surprisingly focused and engaging narrative throughout the game’s 50-hour adventure.

Sure, there are optional side quests to undertake. But these are pared down significantly when compared to similar titles like The Elder Scrolls V: Skyrim and The Witcher III: Wild Hunt. This makes for a more refined experience than I was initially expecting. And to be honest, I found the game’s streamlined narrative to be a refreshing change of pace. 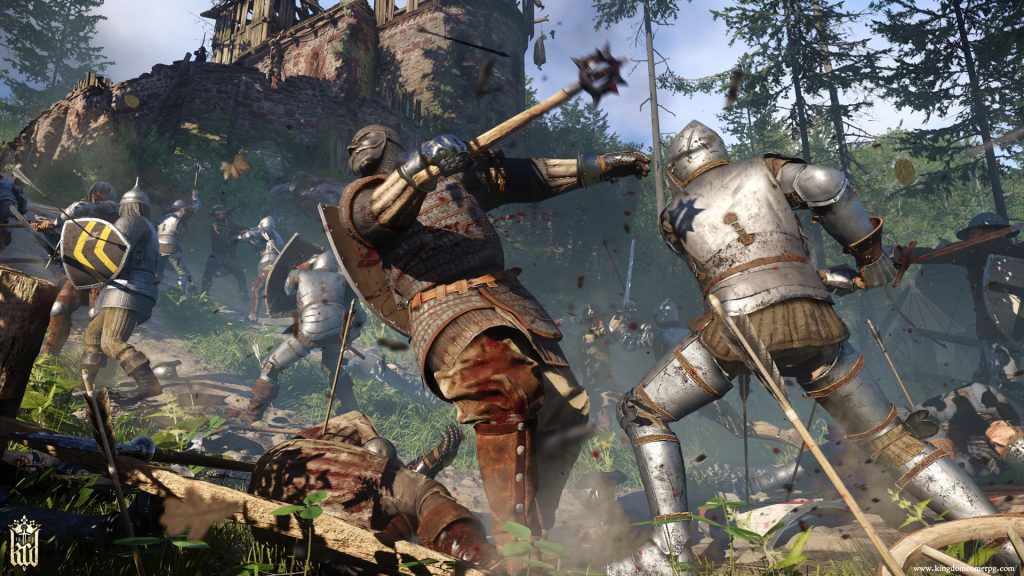 Kingdom Come’s melee combat has a satisfying sense of heft and depth to it.

Kingdom Come: Deliverance is at its best when it’s immersing you in its gripping narrative and believable world. It’s hard not to feel a sense of satisfaction as you watch Henry grow from a scrappy young lad to a veteran warrior on his quest for revenge. However, the strong storytelling isn’t the game’s only strong suit. There’s a staggering amount of detailed poured into every facet of this adventure. For example, shopkeeps and bandits react to you differently if you’re covered in the blood of your foes. They’ll even turn tail and run or drop their weapons and grovel at your feet if you’re scary enough.

Additionally, there’s a pretty in-depth dialog system that allows you to handle situations in a variety of ways by using your powers of charm, intimidation, or diplomacy. The quests are pretty ambitious, too. There’s also a significant emphasis on survival elements grafted onto the game’s knightly framework. You’ll need to make sure to eat and sleep regularly or you’ll find yourself passing out on the side of the road. Trust me when I say that’s never a pleasant experience – especially not in medieval Bohemia.

The game’s melee-based combat system is gripping, too. Each duel requires you to master the timing of your attacks, parries, and dodges while carefully managing your stamina. Enemies are smart and fight defensively. That said, simply rushing in swinging is a good way to find yourself pushing up daisies. There’s even a complex stance system at play. For example, attacking an enemy who’s delivering an overhead blow with an underhand attack will give you the upper hand, etc. It’s an interesting system that’s a bit unwieldy at first. But with practice, these duels become incredibly engaging. 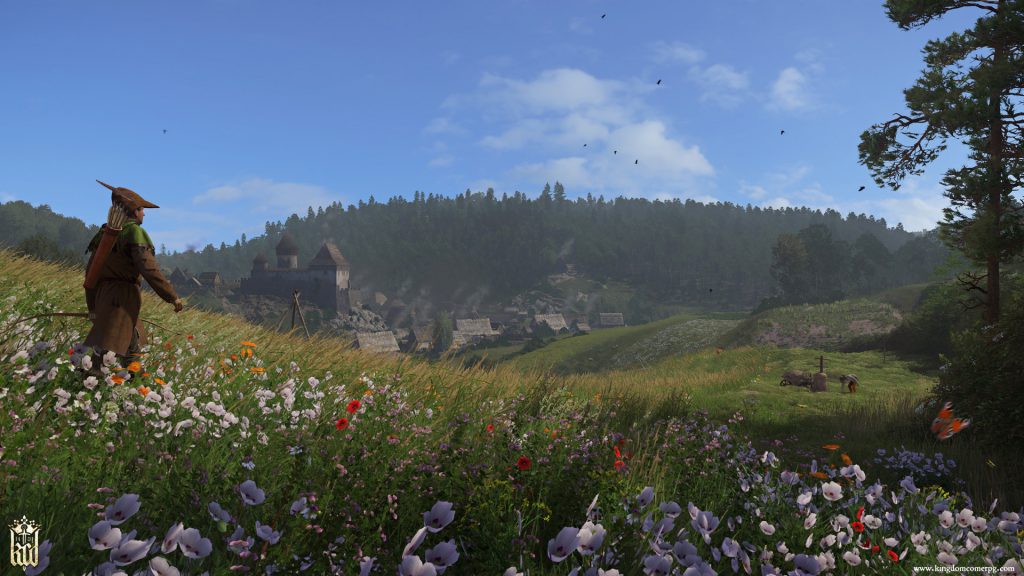 Despite the war and political treachery, the Holy Roman Empire is a lovely place.

No doubt about it, when everything is working the way it should, Kingdom Come: Deliverance is an incredible experience. Unfortunately, things don’t work the way they should nearly enough. During my time with our Xbox One review copy of the game I encountered a laundry list of bugs that frequently hampered my progress. There were numerous times I was unable to advance in a quest because a key character was stuck behind a locked door, forcing me to wait for (in-game) hours or days for them to appear. Other times I’d talk to characters to initiate quests, only to have the cutscene I triggered suddenly end and have to repeat the process ad nauseam.

And don’t even get me started on the numerous physics glitches that leave enemies and townsfolk alike hovering in the air like warlocks. Not even the game’s sizable 23GB day-one patch was enough to squash these glaring bugs. And even when played on the Xbox One X, the game suffered from considerable frame-drops in large open areas. Without question, this is the most glitch-ridden game I’ve played in years. And trust me when I say that’s an absolute shame. Because when everything comes together, Kingdom Come: Deliverance is tremendously fun, and a valiant first effort for Warhorse Studios. As it stands, it’s a game full of potential that buckles under the weight of innumerable technical issues.

A rather finicky save system makes matters a bit worse, too. The game autosaves after key events, like when a quest is completed. Yet the only way to manually save is to use a limited and somewhat prohibitively expensive item. This makes it easy to find yourself saving a game after several hours only to discover a nearly game-breaking glitch that costs you considerable progress.

Without question, Kingdom Come: Deliverance suffers from its share of technical issues. But despite these frequent annoyances, I still found myself enjoying the time I spent with the game thanks to the robust systems that pin everything together. I loved the tense, one-on-one duels. And the game’s focused and personal tale of a revenge was one that kept me glued to my controller even after having to load a save file more times than I’d like to admit to actually get a quest to trigger properly.

But you know what they say, revenge is a messy business. Beneath Kingdom Come: Deliverance‘s many bumps and bruises, there’s a gripping tale to be told. Here’s hoping Warhorse Studio can iron out the kinks down the road. As it stands, this is one fun but flawed journey that will test both your skills and your patience.

This review is based on an Xbox One review copy of Kingdom Come: Deliverance given to HeyPoorPlayer by the publisher.

An expertly forged adventure   If you’ve read my previous review on the recent entry in the The Legend of Heroes series, Trails in the Sky Second Chapter, you’ll know…