The worst Age of Empires game gets the worst remaster. 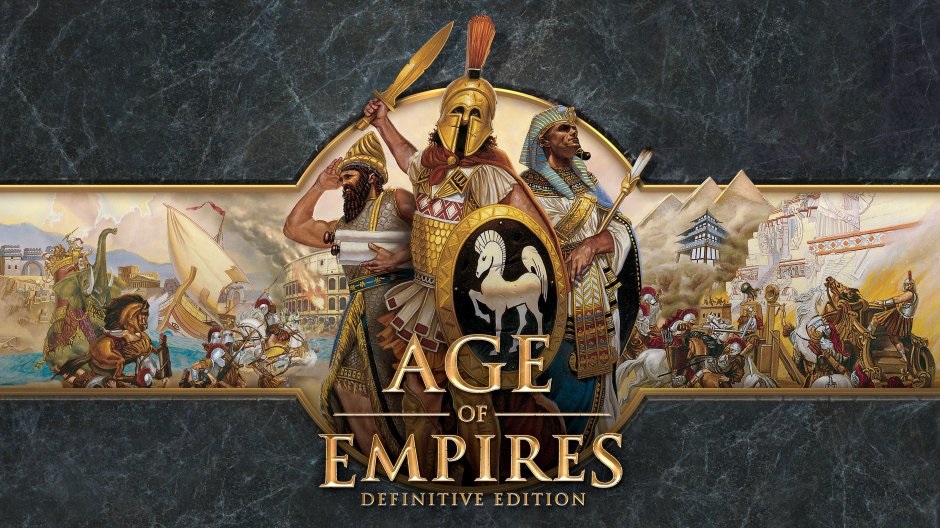 Age of Empires is the first game I ever played. I was too young to really understand it, and according to my mother I mostly just liked to build houses and then get villagers trapped in those houses. Nevertheless, Age of Empires is in my blood, and whenever I play a new entry in the series or replay an old one it feels like coming home. In the not-so-distant past I’ve praised Microsoft’s efforts to revitalize the series, releasing definitive HD remasters of the games complete with oodles of new content courtesy of Forgotten Empires, a mod team turned official developer that truly does care about the series and is passionate about making each game the best possible version of itself.

Which brings us, inevitably and unfortunately, to the first Age of Empires. Like the first Saint’s Row it’s a game that kicked off a beloved and venerated series, but not one which is actually very good or fun to play. And while Forgotten Empires has done everything they can to polish this turd to a pristine shine, the game has also come saddled with a host of technical issues and the ever-infuriating quirks of Games For Windows 10.

Let me keep it simple: don’t buy this game. 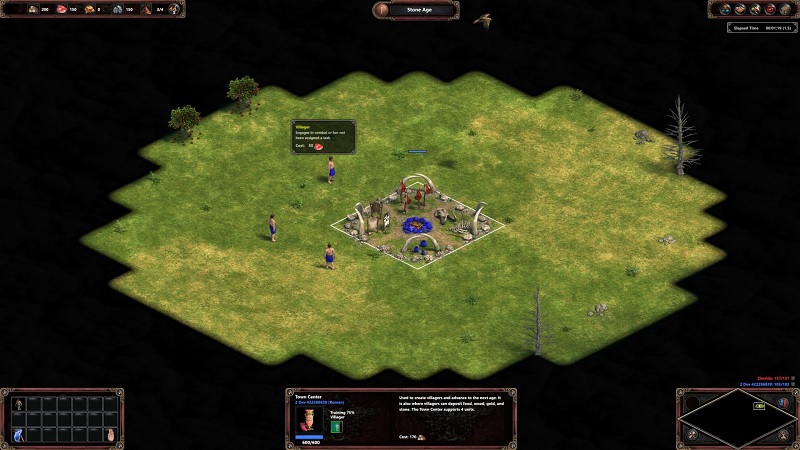 Age of Empires is a historical real-time strategy game originally released in 1997 focusing loosely on the period of history lasting from the Stone Age to the beginnings of the Roman Empire. It was an early entry in a still-burgeoning genre that was waiting for StarCraft to come out a year later, and even at the time it felt a bit…empty. There’s loads of civilizations but the only differences between them are a couple of closed branches on the tech tree, and there’s really not much strategy beyond “age up faster” and “build walls.” Keep in mind that at the time it was literally advertised as being similar to SimCity – much of the appeal was simply the fact that you could build big cities in a world that felt detailed and historically-grounded. If you wanted deep strategy you’d play Civilization.

Most of the technical skill involved in playing the original Age of Empires came simply from fighting the unintuitiveness of the whole thing. You could only build one unit from a building at a time, you had no good way to keep track of those units, and actually getting them to go where you wanted them was a Sisyphean exercise in futility. To its credit, the Definitive Edition has added a lot of quality-of-life fixes, like an idle villager button (very important because your villagers rarely stick to a task for very long and it’s hard to tell when they’re working or not), the ability to queue multiple units in buildings, and Attack-Move. But a lot of these fixes only serve to show how simple the gameplay is when stripped of most of its mechanical frustrations.  Plus the pathfinding and AI are still surprisingly crap. 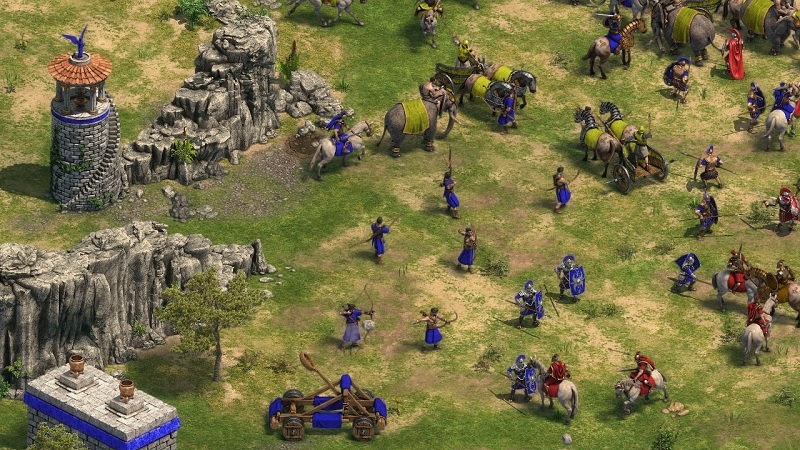 Here’s the thing: Age of Empires: Definitive Edition is in many ways a labor of love. In addition to the quality-of-life fixes, Forgotten Empires has redone every single sprite and texture in the game – and while AoE 2‘s HD Edition merely cleaned up the old sprites and made them higher-resolution, these are completely new models with new animations that still somehow feel like their bricky pixel counterparts. This is officially the best-looking Age of Empires game, and it looks especially good if you’ve got a 4K screen to display it on. Plus there’s new sounds, new voice narration for campaigns, new music, full workshop support – it’s clear that this was intended to be a passion project, a far cry from the pointless StarCraft: Remastered whose mission statement seemed to be “Yeah, I bet we can make a few bucks off this.”

But these changes aren’t enough. The units are beautiful but they’re still pretty much straight upgrades of each other, a far cry from the depth of AoE 3 or even the simple but satisfying Rock-Paper-Scissors mechanics of AoE 2. The campaigns are fully narrated but they’re still just regular singleplayer games with a depressing 50 unit population cap and one or two half-hearted objectives thrown in like “Destroy the sentry tower” or “build a sentry tower”. Hearing the incredibly long historical background for each level read aloud doesn’t suddenly make it interesting, and I doubt anyone will have the patience to play through all 10 of the tedious and nearly identical campaigns. 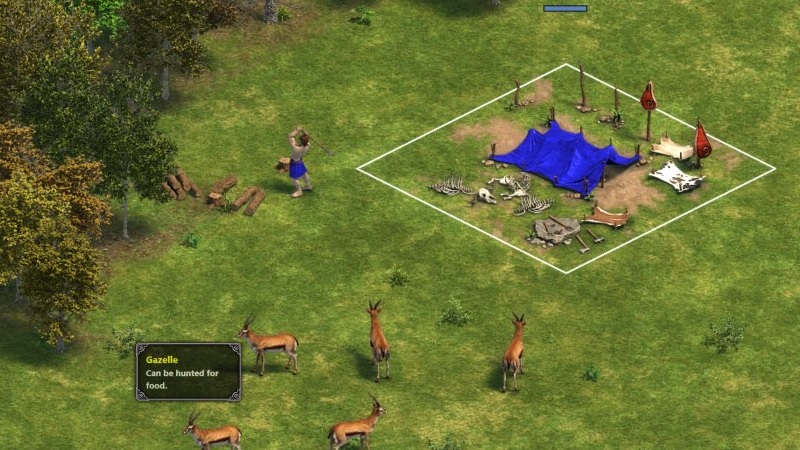 And some of the changes made seem to be actively working against the game. The only thing a remaster like this has going for it is nostalgia, and the overhaul of the presentation is so complete that it felt like a lot of that nostalgia wasn’t there for me personally. The most bizarre decision is the new sound design. The original Age of Empires music is legendary, and its ridiculous voice lines are even moreso. See, later entries in the series would use the historical civilizations’ actual languages in dialogue, but due to budget constraints and the fact that nobody’s sure what a lot of Stone Age languages sounded like, every unit in the first game speaks in an entirely fictitious language invented by the developers. Villagers greet you with a friendly “Rogan?”, priests convert others to their faith by repeating “Wololo”, and while this might sound like a nitpick to newcomers, longtime fans know that these sounds are an integral part of the original game and its community. They’ve been remembered, remixed, and memed into an important place in videogame history.

SO WHY IN RA’S NAME WOULD YOU RECORD NEW LINES TO REPLACE THEM?

I found I had the most fun playing the game with the original graphics and sound effects in Classic Mode. Unfortunately, this mode is currently only available in singleplayer skirmish games – not in campaigns or in multiplayer. Which brings us neatly to the technical issues. 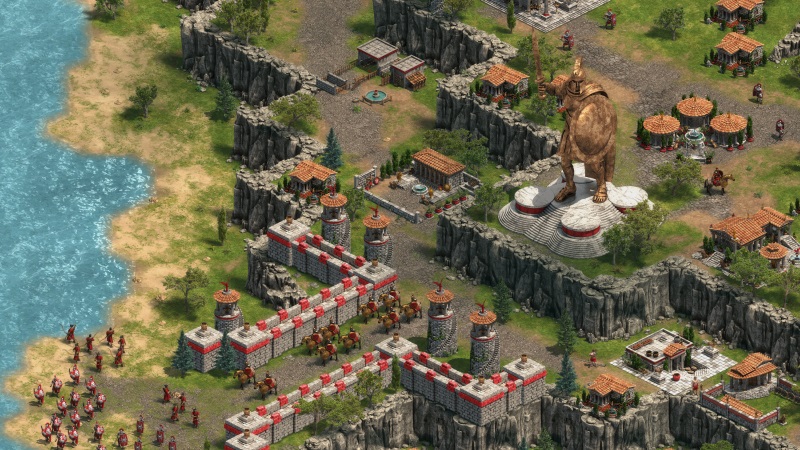 Age of Empires: Definitive Edition is only available through Games For Windows 10. This is annoying for quite a few obvious reasons, not the least of which being that many PC gamers haven’t yet upgraded to the latest operating system and therefore won’t have access to the game, but it was announced at E3 as part of Microsoft’s big push to get people to move to their inferior distribution service.

It also makes it hard to tell which gamebreaking bugs are Microsoft’s fault and which ones are just part of the game. A number of players can’t start the game at all, nearly everyone has issues with the text for some reason (it either disappears or changes font or goes transparent like it did for me), the new graphics mean that there’s lag in this 21-year-old game, and I got an extra-special treat (also documented by other players here) in which the app has to be reset after every single time you play it. That means there’s no savegames, no progression (though I hear the achievements are broken too), and absolutely no reason to continue bothering to slog through this tedious trial of patience except for my professionalism as a reviewer.

In Forgotten Empires’ defense, their track record with fixing bugs is pretty good. AoE2 HD and the Tale of the Dragon expansion for Age of Mythology EX both released in similarly broken conditions, and both have been patched to the point that I can heartily recommend them. It’s possible that this game, too, will become something great. But my job is not to review what might be. It’s to review the product in front of me, and right now, I can’t think of a single reason why anyone should buy this. If you want to see the classic game that launched this franchise, you can get the much more stable and much more content-rich Age of Empires II HD for the same price. If you want something a bit more weird and experimental, the complete set of Age of Empires III is 40 bucks on Steam.

Even if the game was great, this would be an unacceptable condition to release a product in. But Age of Empires isn’t great. It succeeds neither at being a nostalgic cash grab nor at reinventing the game for a new generation, ending up at a pretty but pointless middle ground. It’s a buggy, boring mess whose only real selling point is its graphics and presentation – and in that sense, this really is the definitive Age of Empires.

Full disclosure: This review is based on a retail copy of Age of Empires: Definitive Edition purchased by the reviewer. 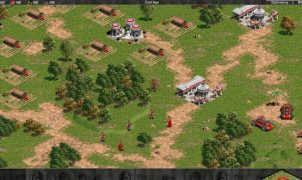 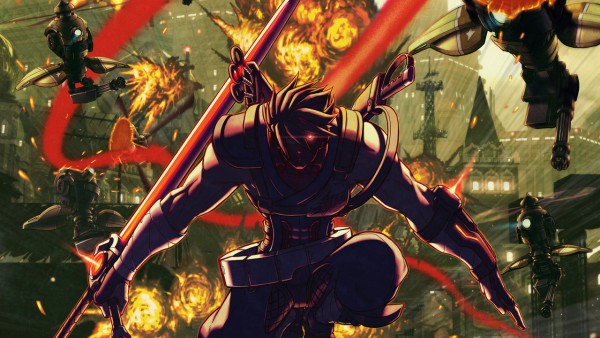