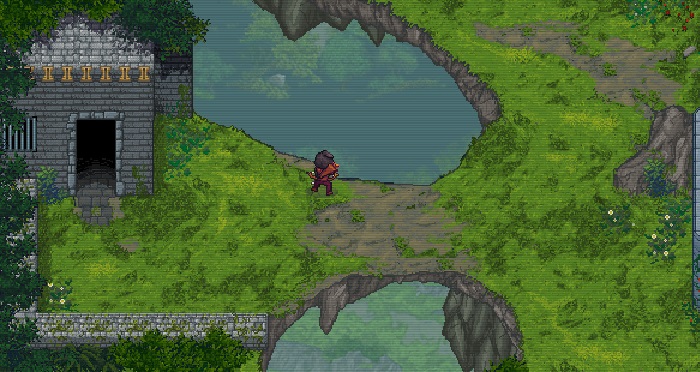 Now that I’ve played Tangledeep, I finally know what I want to be when I grow up. I’m going to be an Edge Thane. Something about that musical approach to maniacal war-mongering really appeals to me. But before I skip off in search of my very first claymore, I should probably finish this review.

Tangledeep is a roguelike dungeon crawler presented in pixel art graphics that hark back to the golden age of 16-bit RPGs. The plot is refreshingly minimal; adventure out from the safety of your underground village into Tangledeep, a towering, unpredictable labyrinth, in search of the long-forgotten surface world. And that’s it. Just get in there.

In typical roguelike fashion, the labyrinth is split into individual, procedurally-generated floors. Movement and combat are turn-based and occur on a grid spanning the entire level. When you attack or move to an adjacent square, you take a turn. Enemies immediately make their next move in response. It’s a deceivingly flexible system that allows you to blast your way through cannon-fodder at break-neck pace before painstakingly strategising for minutes per turn when a more formidable foe shows up. And strategise you must, because this thing gets brutally difficult.

So, this Edge Thane I mentioned is one of 12 playable jobs. The game caters for all the usual roguelike, RPG-ish play styles, including ranged specialists, casters, and various melee-based classes. Each job comes with its own skills that become available as you earn ‘job points’ for killing enemies. Crucially, an NPC in your village allows you to switch jobs at any time and retain the class-specific abilities you’ve previously acquired. I’m a massive fan of this system. What you end up with is a lovingly crafted character with a ‘very particular set of skills’. If only I’d known from the start, I would have named her Leanne Neeson.

I’m a bit weird when it comes to games like this. Wherever possible, I flat-out refuse to take the easy way out with ranged attacks. That’s right, I said it! Real heroes use swords! OK, I’m mostly joking. I won’t judge you too harshly if you’re the type to run away and shoot pointy sticks at people. Still, for some reason, I do have an overwhelming, passionate preference for close-range combat. Which is to say that, for me, it’s really important that a game focusing on class customization gives me more specific options than just “close, ranged, or mixed”. Melee is the only arena for me, and I have preferences within that scope. Tangledeep actually pandered to my preposterous pickiness. It spoiled me.

Of course, I started out as an Edge Thane, and that job remains my personal favourite, but for a while I switched to Budoka, accompanying my own savage martial artistry with triumphant, histrionic melodies. A flurrying amalgam of Jackie Chan and Jack Black. Talk about a particular set of skills.

The heroic Edge Thane heroically contemplates her next act of heroism.

Tangledeep has a beautiful vibe to it, mostly due to the pixel work and soundtrack. Let’s start with the music because it’s my favourite bit. I feel slightly guilty comparing it to the legendary sounds of Secret of Mana on the SNES because the Tangledeep score is an absolute triumph in its own right, but the influence is so clear that I kind of have to.

Some of the songs could slot into either game and nobody would be any the wiser. No wonder, since Hiroki Kikuta himself, the composer behind Mana’s epic soundtrack, contributed. Add to that the musical talents of Grant Kirkhope, Norihiko Hibino, and the game’s developer, Adam Aversa (already a very accomplished musical artist), and you have a recipe for greatness. Some Tangledeep grinding is required when things get tough, which, as with any RPG, can get monotonous. The velvety tones caressing your ear drums genuinely take the edge off.

The pixel art is fantastic, if a touch inconsistent. The vast majority of sprites and environments are excellent. Enemies generally look well-proportioned and make for a worthy tribute to the source of their inspiration. But now and again you’ll find a monster or even a job thumbnail (regrettably, I’m looking at you, Edge Thane) that looks like it came straight out of a teenager’s DeviantArt account.

I’d also like to have seen a brighter palette used on some of the areas. Take the main camp, for example. I realise this is an underground settlement, so technically there’s no reason for it to look as if it’s drenched in sparkling sunbeams, but as it is, the place just looks dull to me. The greens are greyish greens and the blues are pretty much just grey. If we’re all OK with subterranean grass flourishing without a hint of sunlight, surely a well-lit undergound cavern isn’t an outrageous proposition. The environments are always intricate and full of charming detail, but they don’t make my eyeballs helplessly swoon the way they could have.

The writing, on the other hand, is consistently grade A, top notch, first class stuff. Every NPC speaks with such personality, I became irrationally sold on the game very quickly. Dialog is brilliantly colloquial with excellent grammar. Yes, the grammar excited me. Come at me, I’m an Edge Thane.

Is it just me or is this refreshingly hilarious?

Will Thane for HP

It’s safe to say that Tangledeep is a challenging game. True permadeath is an option, as is a sort of ‘permadeath lite’ mode, whereby only progress at the camp persists after death, along with any goods you were shrewd enough to bank before dying. For the faint of heart (probably the very same people picking ranged classes I imagine), there’s an “Adventure mode”, where the stakes are lower still. The developer recommends the middle approach as the intended experience, and I’d second that sentiment. It’s tough for sure; losing your character is a real gut punch. But I loved the pressure. Everything felt genuinely dangerous, and the intense soundtrack felt more than justified.

There are a couple of issues when it comes to the challenge level though. For one thing, the difficulty spikes can be a bit steep. Without warning you’ll find yourself getting trounced, praying to any god you can think of to get you out of that dungeon before it’s too late.

My other issue was HP management. In this regard the format is much like any other RPG; use healing flasks or eat food to recover health over time, fully recover with each level up, and receive healing at home base. That sounds reasonable, but here are the caveats. You can only refill your healing flasks at special fountains, which disappear after a single use. Merchants have only a limited supply of food. The healer back at camp charges a higher fee every time, very quickly reaching unreasonable numbers.

This is absolutely a design choice, and there are ways around it. You can grow your own food, and take certain measures to allow merchants to restock, but these are fairly convoluted approaches. I appreciate the organic difficulty, but this feels forced and quite frustrating. By all means, punish me for all of my silly mistakes while I’m in the dungeon, but when I’m back at camp, just let me heal up in peace. It’s just polite.

A rug fit for a Thane.

All these in-depth job mechanics and artsy audio-visual assets are great but it’s the stuff in between that ties things together to form an effective, enjoyable gaming experience. Other than the occasional fleeting frustration caused by clumsy menu design, it’s very rare for Tangledeep to knock you out of your zone with jarring bugs or mechanics. Apart from, y’know, permanent character death at the hands of an unexpectedly nasty critter. But that’s what you signed up for.

Oh, and here’s a major plus point. It’s fun to hit things. The sound effects are satisfying and the animations do just enough to make combat addictive, although I would’ve liked to have seen a little more fluidity in the attacks. A few extra carefully-drawn frames of animation could have removed some of the stiffness from the strikes.

So let me wrap up. Tangledeep is just great. It’s clearly been developed with genuine passion, it oozes character, and offers plenty of replay value with almost limitless class-customization possibilities. It isn’t sufficiently innovative to transcend its genre, and it suffers from a few rough edges, so if traditional roguelike titles have failed to hold your attention in the past, you’ll likely face the same issue here. Nevertheless, Tangledeep is the type of game that some players will absolutely fall in love with. It’s worth finding out if you’re one of those players.

Full disclosure: This review is based on a PC review copy of Tangledeep given to HeyPoorPlayer by the publisher.

McPixel 3 Review: The hero we probably deserve Oh, McPixel! Thank God you’re here. Hurry, this way! We don’t have much time — 30 seconds, in fact! You see,…