Rally Racers deserves a medal for trying its best 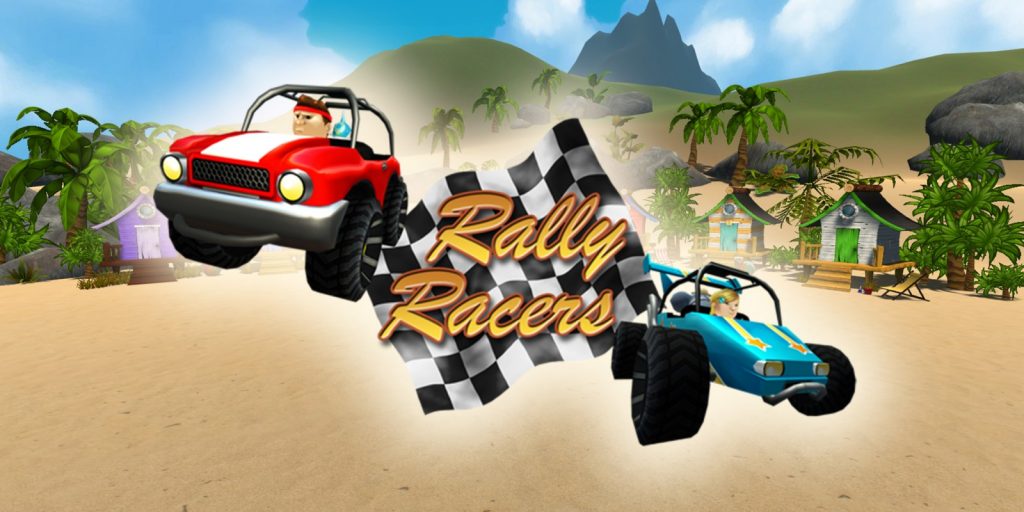 Rally Racers sounds too much like Wacky Racers. I’m not quite sure it’s a coincidence.

I feel sorry for 90% of Arcade Racing games that come out.

It isn’t easy living in a post-Mario Kart Deluxe 8 world, especially if you’re trying to do something new that makes your Kart racing game stand out in hope that nobody will look at it and say ‘meh, let’s just play Mario Kart instead’.

That’s why when I started playing Rally Racers I said to myself, ‘Aimee, fuck Mario Kart and go in with an open mind’. So I did. But if I’m being honest with you all – as well as myself – I needn’t have bothered, because Rally Racers manages to make even the most unique parts of itself seem like a chore. And that’s not me even mentioning the fact when I first tried to start the game it decided to crash on me like, three or four times. So far, so terrible.

A shame, because the game had potential to make itself a Champion of Kart Racing Games that didn’t have Mario in front of the title. 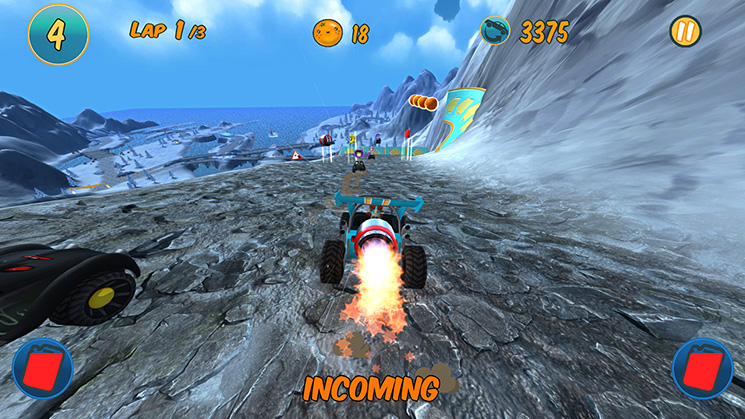 Rally Racers has three different goals for you to complete. But do they feel different?

The ‘story’ of Rally Racers is pretty simple as stories go. You play as this kid called Rees who, for some reason or other, has beef with his evil brother called Droog. Unlike most people who make barbed remarks under their breath when their angry, Rees and Droog settle their differences through kart racing in cars that have enough weapons to make anybody nervous. But hey, the goal is to beat Droog no matter the cost so I guess I can’t complain. Even if Droog’s way of trying to beat you is having a level entirely to himself where he throws ghosts at you. What a weirdo.

But! Before you can beat Droog you’ve got to go through different islands, meeting their expectations before you can progress any further. So, of course, you’re thrust into a tutorial that helps you learn the controls, teaches you about power-ups, collecting oranges and why doing tricks in mid-air is something that really adds to the game (it really doesn’t.)

This leads me to speak about the three different goals you must reach in order to progress. The first is winning the race, because duh. The second is reaching the set amount of points you can get by doing different tricks in the air and the third is collecting a certain number of oranges with faces on them. To list them like this makes them sound pretty different, though I can only say it does anything but. Sure you’ve got to take on a different perspective on how you’re going to perform each time you race, but to me it felt as though the game was desperately trying to prolong itself so I wouldn’t complete it in two hours.

So, yes, while the three objectives look different, if you look a little closer you’ll notice that all there is to them is padding. Lots and lots of padding. 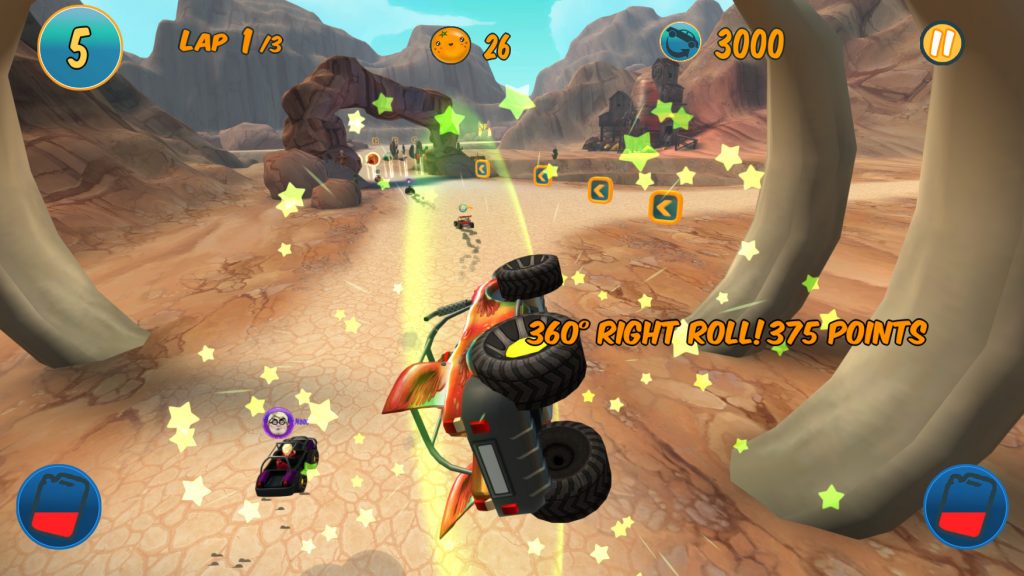 Whether those are tears of joy or despair…Well…

As much as I’m ragging on this game, there are moments where Rally Racer’s potential shines through. One of my favourite things about it is the detail that went into designing the different environmental worlds, the snow world being a particular favourite of mine. Each world always kept me on my toes, challenging me to do things a way that I wasn’t so sure on but eventually prevailing in, especially when these paths led me onto secrets that could help me in the race.

I also very much liked the variety when it came to customizing my vehicle to adapt to each world, that was pretty neat and actually made me appreciate what System 3 was trying to do in this game they’ve created.

Regardless of these positive features, Rally Racers’ gameplay truly makes what could have been an ‘okay’ game into a terrible one. The controls feel as though I’m trying to steer a balloon around the track rather than a race car. And yes, I know that upgrading handling helps, but even with handling at the highest tier it can go, the car feels as though it’s going to shoot off the screen at any moment. But hell, that’s just going forward! Going backwards is a whole other kettle of fish. With even a gentle push of the reverse button your car skids off the track and into the unknown, causing the game to plonk you back on the track five seconds behind everyone else.

You would be forgiven for thinking that the system helping you out when you’re off course is a good thing, wouldn’t you? Not in Rally Racers case. Sometimes I felt as though the system was outright broken as some jump pads allow you to fly up in the air to do your stunts, which is fine, but the game would then register me as of course and not only would I lose valuable air time but I’d be reset back to the start. I think I smacked my forehead so hard in frustration at that point I lost a good ten years off my life.

Is Rally Racers worth finishing the race? 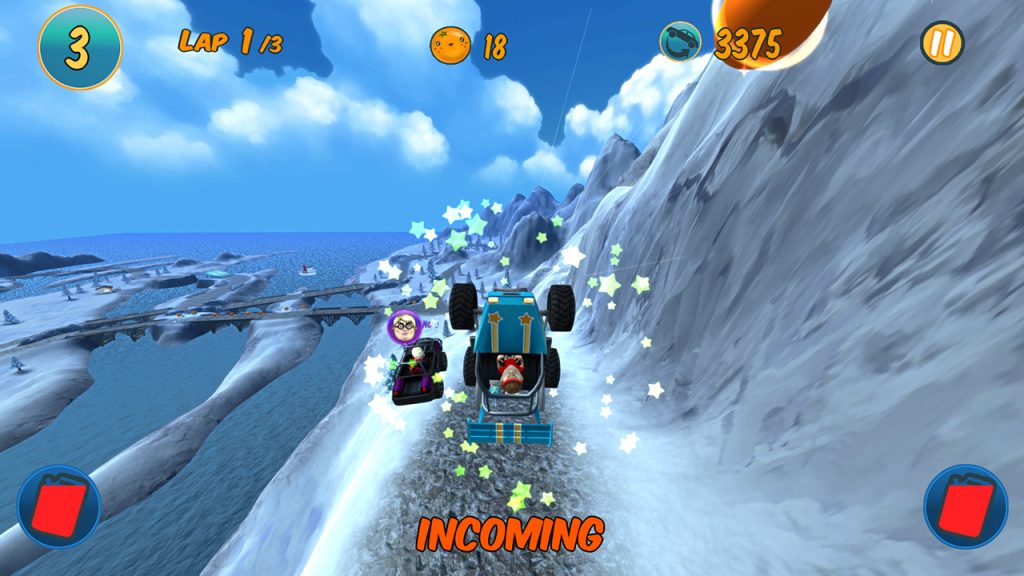 While I appreciate that West Coast Games have tried their very best in giving people the racing game they so desperately want, I’m not sure they’ve succeeded in doing so when it comes to Rally Racers. There are some fun, even brilliant, ideas but ultimately the game lacks the heart and soul that drags racing fans to games like Mario Kart.

What’s more is that it doesn’t even give you a reason to want to play more even after you’ve completed all the levels. There is no multiplayer (which, considering how dismal the game already is, I’m not sure whether to be thankful or not) and once you unlock all upgrades it feels as though you might as well pass it over to your two-year-old niece and watch her play for a while.

West Coast Games might deserve a medal for effort, but they don’t deserve your money for a game as poorly done as Rally Racers.

Full disclosure: This review is based on a Nintendo Switch review copy of Rally Racers given to HeyPoorPlayer by the publisher. 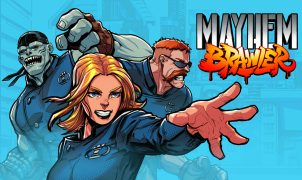 Mayhem Brawler Review: Taking It To The Streets (Of Rage)   The beat-’em-up genre has seen something of a resurgence in recent years, with games like The Takedown, Fight…