The Void Rains Upon Her Heart Preview

A frustrating game for little payoff.

Veyeral Games’ The Void Rains Upon Her Heart is a little game with a few cute quirks. The indie dev’s first foray has great potential but ultimately falls flat. It’s billed as a shoot-em-up bullet hell game and in that regard it succeeds. Since it’s currently in early access, perhaps with some work it could be a fun game. Until then, it needs some work. 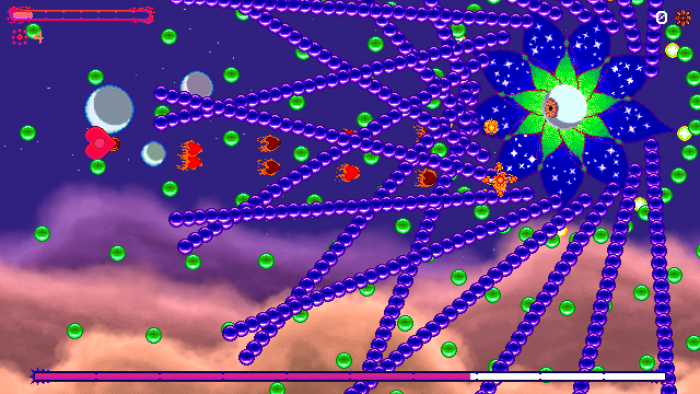 In The Void Rains Upon Her Heart you are ostensibly a tiny, nude (optional) alien girl who lives in a cave with monsters. However, your heart has the power to fight and, ultimately, heal the monsters into kindness. How do you do this? Well, clearly with your heart gun. Your heart gets disembodied from you as you fire bullets into the same couple monsters. Each monster has a pretty generic moveset, though unique to them. Some “bullets” come from fire, some from making the monster split in half as if forcing mitosis, and some just pop up in a string from nowhere. Meanwhile, your heart bullets are equally colorful on a colorful moving background. Your ammo even turns into hearts eventually. All this is to say, wow, what an assault on the senses. I turned off things I thought might be causing eye strain like enemy flashing but even still, I frequently found myself with a headache or totally nauseated from vertigo. The experience has potential to be fun and pleasant but it really misses in the graphics department.

What is the point? 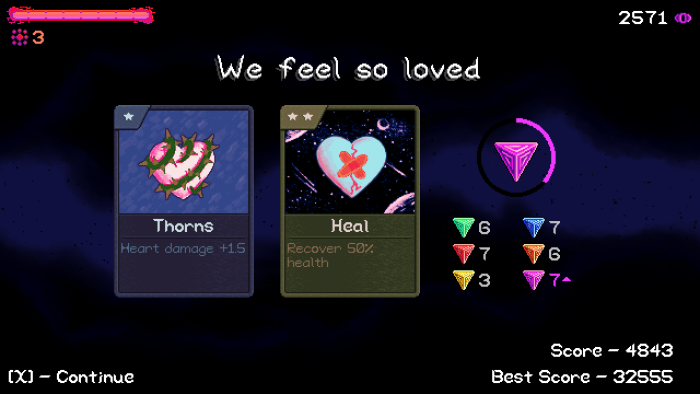 The farthest I got in this game is in a hidden mode called “Defect” where, from what I can tell, if you fail hard enough at the basic story mode, it heals you after every level. I got to section two, chapter three, out of three chapters. After every level, the monster you successfully loved apologizes to you, you get “tetrids” which you can turn into bonuses, and karma points that reflect how well you performed. Given the many similar elements of the surface, I don’t think it’s unfair to make comparisons to Undertale. Undertale keeps you involved in the story and gives narrative and personality to every monster you fight, even within the actual battle. The Void Rains Upon Her Heart is not an RPG and does not have RPG elements, but for a game where the underlying theme is love and compassion, I was looking for a bit more. There’s the brief story element at the beginning where you receive the backstory and some motive, but that’s it until the end. 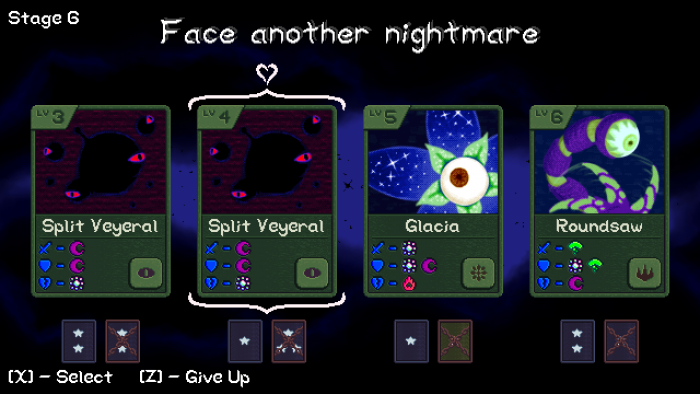 The biggest issue I have is the element of RNG. It completely halts any and all pacing. In story mode, if you die or quit you are sent back to the beginning of the game. The only element retained is the amount of tetrids you’ve earned. The monsters you fight, the bonuses earned, they’re all randomly generated. One game can start with a Burning Veyeral monster and another can start with a Scrambler monster. If you want healing, get to praying, because healing is also RNG. It’s a potential bonus if you complete levels so you may go through a few levels with no healing. Or, if you’re like me, finally bite it on the level that finally gives you healing. It’s not like the game is long and sometimes one wants to zone out to bullet hell, but if you make it, nauseated, to the end and succumb to the will of RNG healing, your progress feels futile because it is futile. I get it: it’s a challenge of skill, but it’s not one that I particularly find rewarding.

I do see some potential in this game. It’s got some cute quirks (achievements are called Dreams Fulfilled) and some of the monsters are fun to go against. I like the added challenges that come up through RNG that can net you bonuses on your run. I like the theme of self-doubt that comes up, even if it feels a little forced through text that turns red and makes a different, deeper sound. However, I feel the basics need serious work. For now, it feels like a slog.