In space, no one can hear you dig deep into a mystery 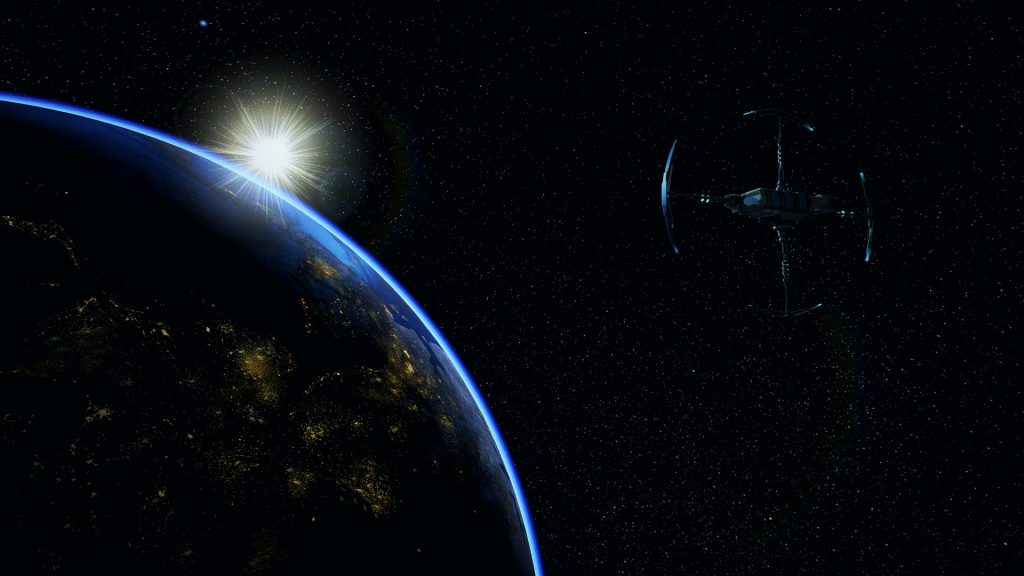 We are not alone. An epic drama of adventure and exploration. In space, no one can hear you scream. With The Station, all those classic movie taglines are as relevant as they are irrelevant. This space exploration adventure promises puzzle-solving, drama, and tension. But can it deliver a maximum warp experience? Coincidentally-named developers The Station hope to make it so.

Natives of an alien planet near Earth are stuck in a perpetual war. So we are not alone after all. Space tagline number 1? Check. A research crew of three is sent out aboard the space station Espial. Their mission is to monitor the aliens’ activities, seemingly undetectable. Tagline number 2? Check. Suddenly the station goes dark, communication cuts off, and its cloaking deactivates. No one can hear them scream. Tagline checklist complete. 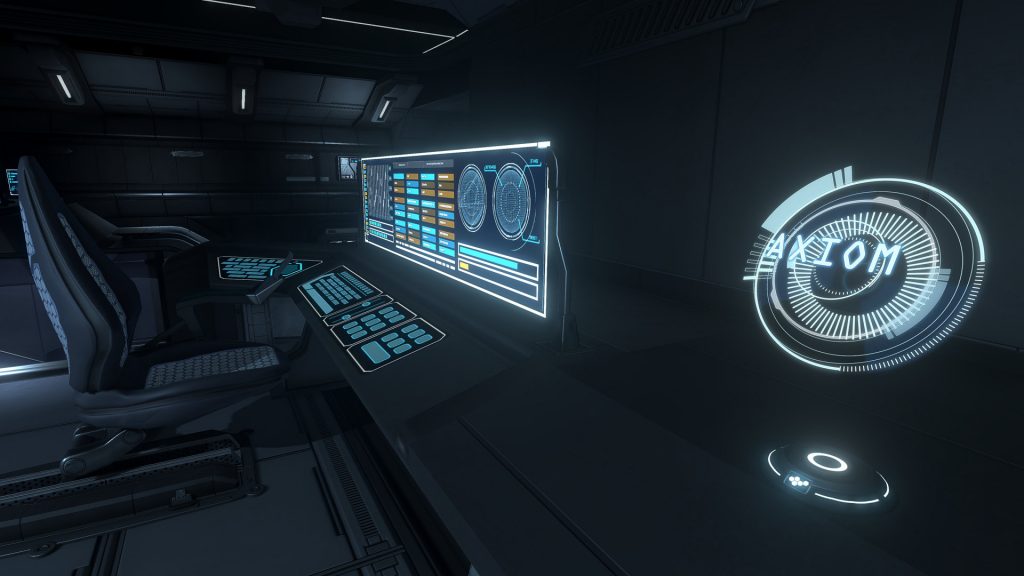 Your nameless role in The Station is to simply find out what has happened on The Espial. Billed as a recon specialist, you soon find yourself also becoming a puzzle-solving detective. Listening to crew logs deliver deep, meaningful insights into the conflict between the station crew. Notes littered around the crew’s quarters, labs and offices reveal their more emotional insecurities. These information trails they leave cleverly and subtly steer you on the path of further discovery. And more importantly, the feelings you develop towards the crew you’re trying to find define your character in this story.

Told from a first-person perspective, initial impressions are reminiscent of the space horror franchise Dead Space. The Espial space station is an eerie setting, with every room and corridor successfully delivering a feeling of unease and cautiousness. Unlike Dead Space, however, this is no action game. There are no swarms of enemies lurking around corners, nor do you bear any arms at any point in the game. There is also no upgrading of any kind. In fact, the only use of weapons in The Station is gathering some to solve a puzzle. And yet sound-wise it projects jump-scares and tension extremely well. Doors fly open with the generic ‘psshhh’ sound so familiar with science fiction. But backing into one unknowingly proves that the tension in The Station delivers. As a headphone experience, it is exceptionally uncomfortable. 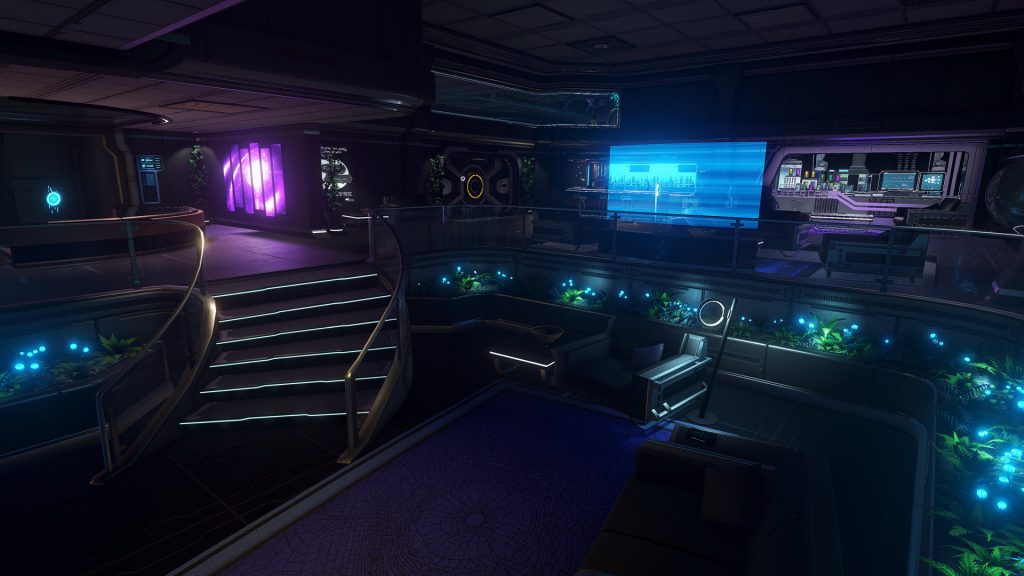 Although there are no weapons, there is rarely a case of hands being empty in The Station. Logs and messages require a simple press of R1 to unlock their contents, whereas holding R1 is used to pick up items. Interactivity is present for most items littered throughout The Espial. They can be held, even inspected, but only key items can be used or kept. After just a few minutes in, it quickly becomes a key identifier of an item’s usefulness. Slight odes to Heavy Rain are present when opening cupboards, drawers or activating switches. R1 grabs, a slide of the right analog stick opens/closes/slides for the desired result. It’s a naturally intuitive mechanic requiring no tutorial. As is the entirety of The Station, much to its credit. It is simple to pick up and learn the surroundings, leaving you to the mission at hand.

Also to The Station’s credit are the visuals. The Espial has big, bold rooms that contain often remarkable detail. The bridge is impressive, and the views out into space are undeniably spectacular, even if only peripheral. Expect even further enhancement for PS4 Pro owners too. The crew members’ bedrooms offer impressive visual insight into the complexity of the Espial’s missing crew. Just from exploration alone, you get a feel for their tastes, emotional states, even doubts. You start your investigation with nothing, but by the end you know everything. 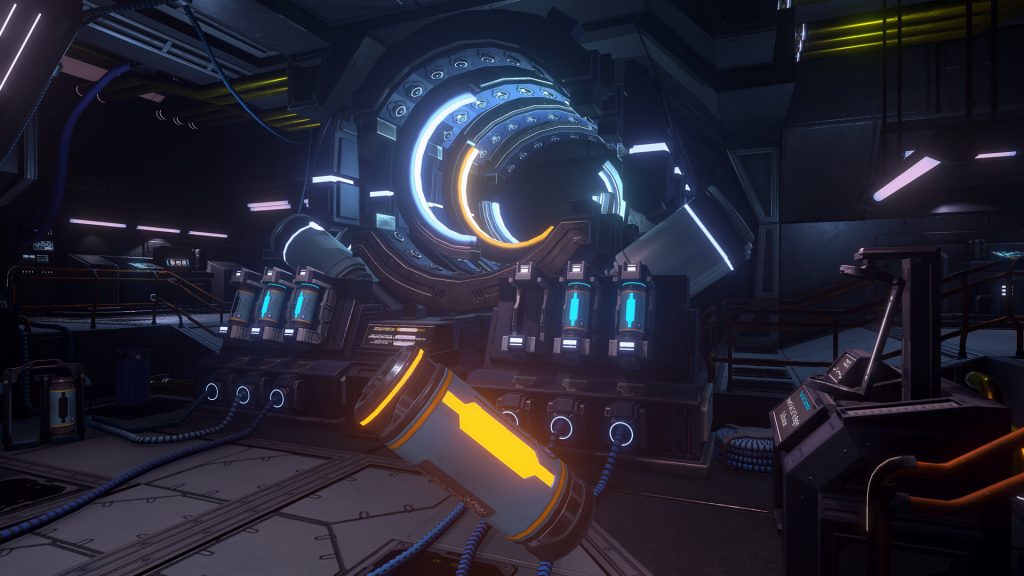 The battery goes there? If only it were that simple

Breaking down The Station to its core, it is essentially as a case of “find access to this area by doing XYZ”. XYZ could be finding an access card, replacing a battery or repairing a droid, for example. Throughout The Station’s approximate 1-2 hour time-span there is a slight dependency on any unsolved puzzles stretching out the journey. Piecing clues together isn’t particularly difficult to the keen eye, but no less clever in their execution. Much like the narrative design of Virginia, there are additional secrets to unlock should you re-enter the fray.

Ultimately, The Station is nice slice of interactive fiction. It isn’t going to test the greatest of minds, but there are certainly a few chin-rubbing, head-scratching moments. They certainly do not deter from a short but intriguing story that flows rather nicely. The Station delivers on its promises, and on the mission set from the outset. The only let-down is its short length. Come the end of The Station, I was left wanting more from its narrative. Which is as much a compliment as it is a criticism.

Full disclosure: This review is based on a PS4-review copy of The Station given to HeyPoorPlayer by the publisher.

Unity is Strength Death Squared is a puzzle game where 1-4 players are tasked with moving cute, color coated robotic cubes to their respective colored areas on a multilayered…