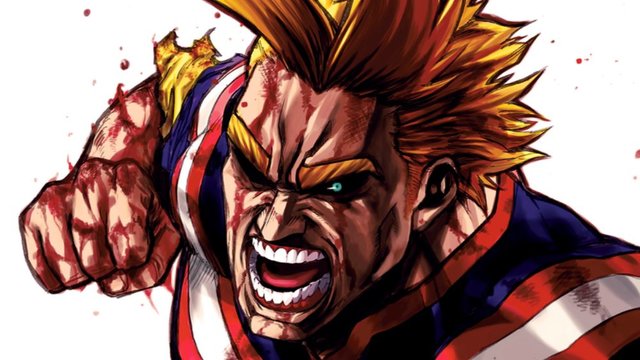 Warning: It’s absolutely impossible to discuss this volume without diving into spoiler territory. Fans caught up with the manga need not heed this warning, but if you’re only following the volume releases, go grab this already!

Our first My Hero Academia review opens with some regret on my part, as we began reviewing manga the month after Volume 10 came out. See, I firmly believe the events surrounding Bakugo’s kidnapping and the confrontation with All For One remain the very best the series has to offer, and I say that despite agreeing with the observation that My Hero Academia has yet to forge a series-defining arc. Perhaps that’s due to the series’ snappy pacing  — barring the just-ended Yakuza arc, we never stay in any scenario for too long — but thanks to that, volume 11 jumps headfirst into the fated showdown between All Might, the world’s greatest hero, and All For One, the nemesis responsible for All Might’s career-threatening injury and the murder of his mentor.

The entirety of Kohei Horikoshi’s My Hero Academia hitherto has been the molding of protagonist Izuku “Deku” Midoriya into All Might’s successor as the world’s greatest hero, an arc that finally concludes as of this volume. All Might emerges victorious, but not before the embers of his already-declining One For All powers finally deplete, and the reality of his shriveled, weakened body is exposed to the world. The world has not just lost its key force in combating the League of Villains; it has lost the symbol of peace, and not even All For One’s capture and Bakugo’s rescue at the hands of Midoriya and his classmates — a covert operation that may very well have cost their hero licenses — is enough to wipe away the shame of this loss.

Even worse, they may not have even achieved that: All For One’s trump card wasn’t forcing All Might to reveal his true form to the public, but that he had groomed Tomura Shigaraki as the League of Villains’ future leader for one sole reason: he is the grandson of Nana Shimura, All Might’s mentor. This revelation is enough to shatter our hero’s willpower and pride, and so all seems lost…that is, until a lone voice behind him — the trapped woman he had sacrificed his identity for — tearfully cries out what the public has known all along: he can beat him.

Any shock over his withered form from the battle’s live-footage has already blown over: his features have withered, his face is a mess, and his muscles are gone, but the public is unaware of his inner torment; nay, they see only him standing up to All For One in spite of his wilted state, and what further proof do they need that he’s still their pillar of justice? Even after he and the rest of the heroes lost face in the barrage of villain attacks and kidnappings, they put their faith in him in the series’ most adrenaline-inducing scene, where they publicly cheer for his victory. All Might may have lost Shigaraki, but the civilian pleas close out his career with the most reminder of all: there will always be countless others to protect, a task he entrusts to young Midoriya. 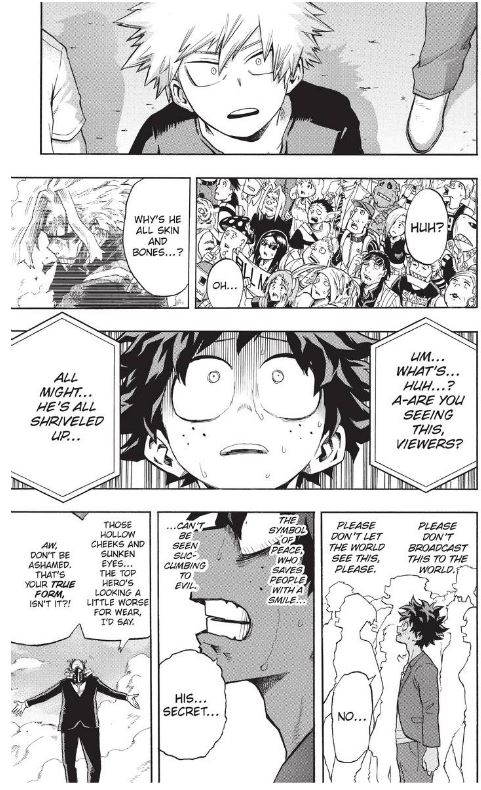 The aftermath of his retirement has far-reaching consequences, be it Midoriya’s tears upon finally realizing his idol’s days are over and Bakugo’s unusually cool-headed demeanor capturing our attention, but none are more heartbreaking than that of Midoriya’s mother. In her refusal in sending Midoriya to U.A. Academy dorms, All Might fully realizes his failure as a teacher: Midoriya’s admiration had clouded not just the harsh reality of One For All’s acclimation (can you blame his mother for all his broken bones?), but led to the mistake of crafting a clone in his No. 1 fan. Midoriya has his own path to follow in becoming the new symbol of peace, and that’s not as the burly, punchy All Might 2.0, but as the green-clad Deku.

Naturally, none of these events would be nearly as effective were it not for Horikoshi’s art. We’ve witnessed his expertise at gushed tears and faces clenched with passion and desperation before, but none are nearly as harrowing as the agony and despair on display with All Might’s exposure to the public and his near-breakdown. From the very beginning, his true form of skin and bones was meant to evoke pity, and that there’s yet to be a reaction more dismal than to the Shigaraki reveal compels one to wonder if Horikoshi designed this form for this very moment. (However, while we’re on the subject of art, the arrow accompanying Jiro’s “Deep Dope” shirt is…uh, ill-thought-out, to say the least)

Of course, it’s not all doom and gloom: by the volume’s end, the students of Class 1-A settle into their dorms and host a contest deciding who has the best room. Some are utterly plain, others reveal bizarre quirks like Iida’s endless supply of glasses, and Mineta’s room is skipped entirely because he is a creepy pervert. Filler? Perhaps, but with the constant melodrama throughout the volume, My Hero Academia‘s excellent humor makes for a relieving segue, and while Tsuyu’s confession shows not everyone, her apology and the comfort from her classmates ends the volume on hope for the future.

The sun may have set on All Might’s era, but in his own words, it’s now Deku’s turn, and I look forward to further discovering how he becomes the world’s greatest hero.

(And to cap this review out, I should mention a certain discovery we learn within the volume’s character sketches; specifically, the one for Midoriya’s mother, where we learn that Midoriya’s father is neither dead nor estranged, but simply working abroad. I’d already thought it odd he’s yet to be so much as mentioned, yet this one scant detail opens the door for a realm of possibilities, and I refuse to believe he won’t play a role. Could he be a hero? A villain? Something else? Don’t leave us in suspense, Horikoshi-sensei!)

Thy Cup Runneth Over (With Quality!) Anyone even remotely familiar with StudioMDHR’s run and gun (but mostly gun) platformer Cuphead knows that its release has been a long time coming.…