Crossing Souls is a game that wears its pixelated heart proudly on its cut-off denim sleeve. From its blocky character sprites to its neon-saturated title screen and grainy, static-filled VHS-esque cutscenes, it’s obvious the game is geared to players with a fondness for the era that gave rise to such riches as E.T.: The Extra-Terrestrial, Bonkers fruit chews, and the ever-looming specter of nuclear annihilation.

Set in the fictional California town of Tajunga in 1986, the game tasks players with taking control of a gang of childhood friends who, after coming across a mysterious dead body clutching a strange, glowing stone are whisked into an adventure where the fate of the world hangs in the balance. One part The Goonies, one part Stranger Things, it’s a nostalgic romp filled with more ‘80s pop culture references than you can shake a Power Glove at. Of course, nostalgia can only take a game so far. But does Crossing Souls have what it takes to stand on its own? Read on and find out!

An Game With Character(s) 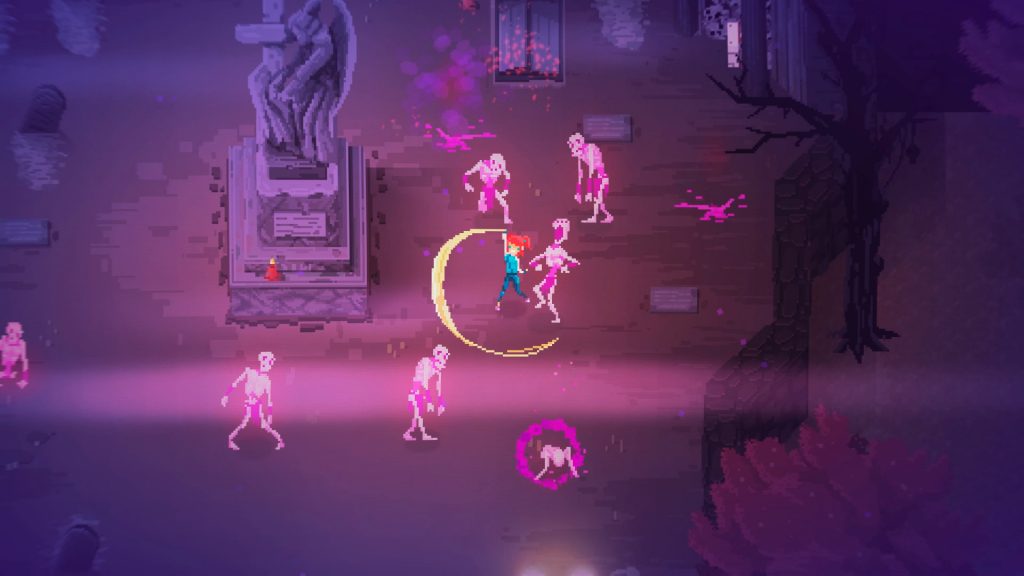 Charlie’s whip makes short work of gangs of ghouls. Don’t hang around for too long, though – they go out with a bang!

Crossing Souls’ gameplay can best be described as a fusion of The Legend of Zelda and The Lost Vikings. The game unfolds from a top-down perspective, allowing you to control any one of your five-character team with a simple tap of a button as you explore Tajunga, navigate puzzle-filled labyrinths, and beat the snot out of the local street punks, grunts, and supernatural entities that call the podunk home.

Each of the game’s five characters all has their own set of skills that you’ll need to use to progress through the world. For example, the main protagonist Chris is a budding athlete who is handy with a baseball bat and can climb vines and over obstacles to reach otherwise inaccessible areas. Matt is a bit of a nerd and lacks the physical capabilities of the rest of the team. However, he has a laser gun that can peg enemies from a distance. Additionally, he can clear wide gaps with the help of his handy jetpack. Big Joe is the muscle of the gang. He’s slow, but hits hard, has a huge pool of health, and can move large objects – a necessity for many of the game’s puzzles. Charlie may look harmless, but she pulls her best Devo impersonation and beat the bejesus out of hordes of enemies with her whip. Additionally, she can use it to catapult herself across huge entire canyons – talk about impressive! And the last character? Well, that’s spoiler territory so you’ll have to see for yourself.

One of Crossing Souls‘ most interesting features is the Duat stone. Found early in the game’s 10-hour story, it’s a crystal that allows you to jump between the world of the living and the dead. Not just a window into the spirit world, it also proves vital to solving the many puzzles that are found in each of the game’s dungeon-like areas. It’s a cool feature that’s used well early in the story, and the Duat serves as a handy McGuffin to drive the action forward as the kids try to keep its powers out of the hands of a shadowy organization. 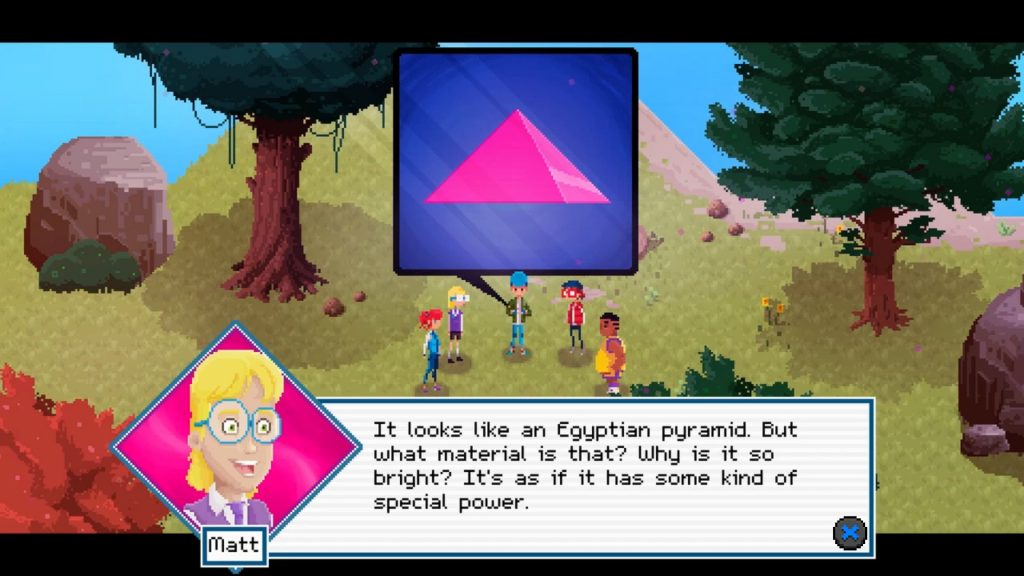 Like most good things in life, Crossing Souls’ story begins with a rock and a dead guy.

Whether you’re cracking the skulls of a feral zombie with a baseball bat or breaking a hex on a haunted library, the moment-to-moment gameplay in Crossing Souls feels fantastic. Combat is fast-paced and packs a nice sense of heft. And the variety of mechanics that each character brings to the table keeps things constantly exciting. There’s a surprising amount of puzzles to solve peppered throughout each area, too, which keeps the game from falling into trap of becoming a mindless beat ’em up. Yet despite the frequency of these puzzles, I found Crossing Souls to move at a blistering pace, which, to be honest, left me wanting more by the time the credits rolled. Not that the ten-hour story isn’t satisfying, mind you. It’s just that it felt like it was over in half of that time thanks to the game’s lightning-fast pacing.

Unfortunately, this breakneck pace also manages to hurt the story to an extent. Moments that should deliver some emotional impact tend to fall flat because we’re seldom given any downtime to really appreciate the characters. And while the game’s cheeky writing is often entertaining and full of cheeky one-liners, sometimes the writing comes across as overly flippant for the sake of being so, which sadly works to the detriment of the experience.

Though these shortcomings were disappointing, they didn’t keep me from enjoying Crossing Souls immensely. The game’s combat is simple, but it packs a satisfying punch. And the city of Tajunga and the others areas you’ll explore all have a ton of heart. I especially enjoyed waltzing through the delightfully rendered arcade, complete with Mother Russia Bleeds and Gods Will Be Watching cabinets nestled within the rows of beeping machines. You can also find a plethora of fun collectibles, including Nintendo games, cassette tapes filled with tracks from popular synthwave artists, and other goodies littered all over the world.

When all is said and done, Crossing Souls is a solid journey into the pixelated past that tells a short but entertaining tale. Still, it has to be stressed that your mileage may vary depending just how much of a soft spot you have for the era the game’s set in. However, if you’re a ’80s fetishist like me, you’re most likely going to really enjoy what developer Fourattic has managed to do here.

Crossing Souls may not be the deepest adventure to release in recent years, but it’s got plenty of heart. From its pixel-perfect retro-style presentation and cartoon cutscenes to its pumping synthwave score, it’s a game that does a great job of capturing the spirit of the era it aims to replicate. It’s just a shame that the writing and pacing often feel at odds with the story the game is trying to tell. Because with a bit more polish, Crossing Souls could have been a modern classic. Despite these nagging issues, I still found myself glued to my controller for the entire experience.

Full disclosure: This review is based on a Steam copy of Crossing Souls provided by the publisher.