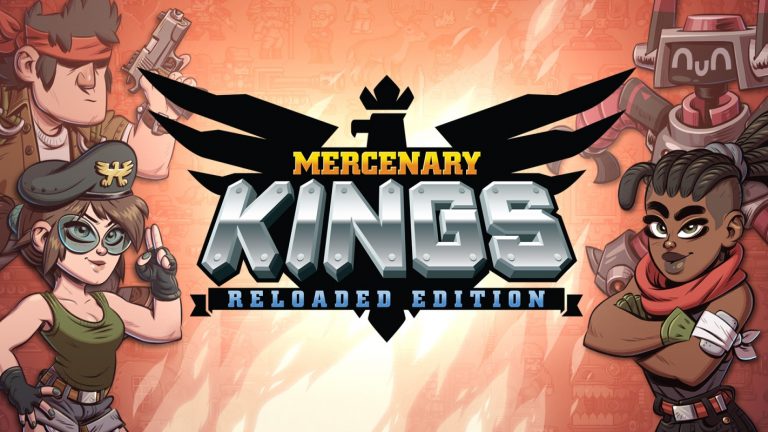 It’s that time again, gamers! You know what time I’m talking about. Time to review another “new” Nintendo Switch game that dropped on the other consoles years ago. That may sound like I’m bashing the Switch’s steady stream of older content, but let me assure you that I’m not. The Switch has given me the freedom of gaming at work (where I spend most of my time) instead of having to hunker down in my game room at home. That means I can actually play the games that I purchase! Hell, if it wasn’t for these older titles getting re-released on the Switch, I would have never experienced amazing games such as Axiom Verge, The Binding of Issac, and the game in this review – Mercenary Kings. Hooray for gaming at work!

Back in my Day 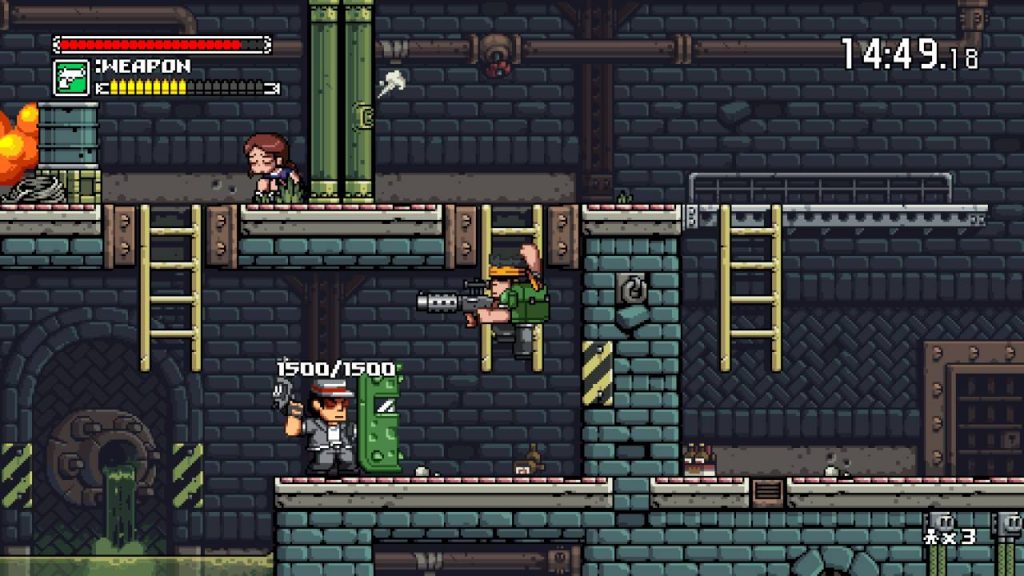 The first thing you’ll likely notice about Mercenary Kings: Reloaded is it’s visuals. The game is drop-dead gorgeous, especially if you consider yourself a sprite-connoisseur (I’m not talking about the soft drink). The hand-drawn environments and characters are all full of charming details that pop off of the Switch’s screen. The animation is beautiful as well. Each and every character has as a bounciness to them. The obvious comparison when it comes to Mercenary King’s visuals is Neo Geo’s Metal Slug series. Similar to that series, even the enemies look cute. Well, except for when their head is shot off and blood is gushing everywhere. Fans of retro visuals, in general, will fall in love with the sprite work presented here. 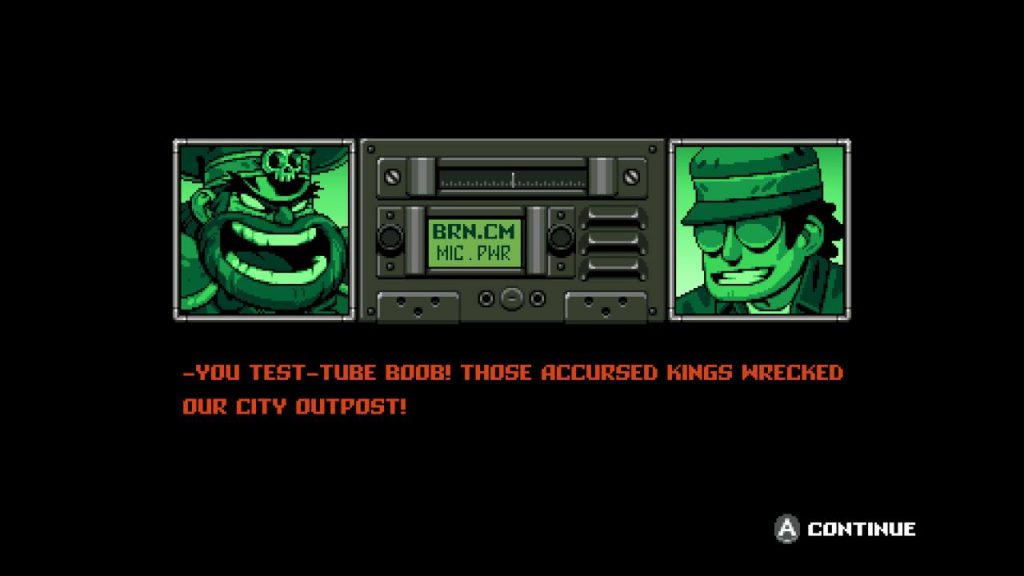 The story of Mercenary Kings isn’t engrossing, but it does fit the “action movie” mold really well. The character you play as is part of a group of mercenaries who are out to stop an evil organization called CLAW. These CLAW dudes have been getting their hands dirty with biological weapons and a host of other stuff that evil organizations tend to dabble in. Your group has set up a camp at an undisclosed location where they are planning to bring down CLAW.

To begin the game you’ll have a handful of help around the camp, but after the first cluster of missions, said camp will be crawling with over a dozen fellow mercenaries. These additional helpers are people that you’ve either rescued or recruited to join your cause. Other than this fresh meat making your camp lively, each one of them serves an important purpose. For instance, Colonel Tasker is there to give you your mission objectives. Bobby and his helicopter Choppy will get you where you need to be to start any given mission. Golden Gate will gladly fill your backpack with important supplies such as medkits and rations. There are several others who all play an important role as well. You’ll find out quickly that the most useful mercenary of them all is Lawless, who will help you upgrade and create new armor and weaponry.

Building is for Winners 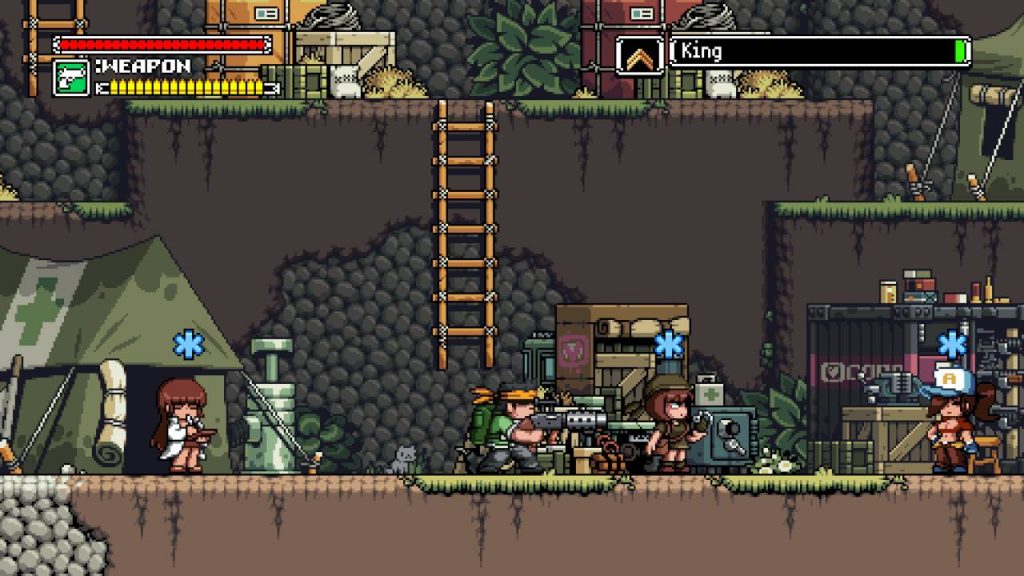 So, how do you create new weapons? During each and every mission your character will have several opportunities to pick up various materials to bring back to camp. These materials can either be obtained from crates or picked off fallen enemies. Bring these items back to Lawless and she’ll be able to craft upgrades for your gun. These upgrades can increase the gun’s power, reduce the reloading time, bump up the accuracy. The list goes on and on. Seeing the amount of information between each gun upgrade is a bit overwhelming at first, but after a few missions, you’ll know what you’re most comfortable with. Don’t go thinking every gun is serious either. Want to see what’s it like to wield a trombone gun? If that isn’t crazy enough for ya, how about a toilet gun?

Other than using materials to craft gun upgrades, there are several other enhancements that you can take advantage of. Pay a visit to Bluebell’s tent and she’ll outfit you with some really interesting modifications. These do tend to have some side effects though. For example, the Lucky Penny mod will give you a better chance of finding rare materials, but you’ll receive less money at the end of the mission. Your character has two slots for mods.  So with some careful planning, you can have some mod side effects cancel out depending on your second mod choice. 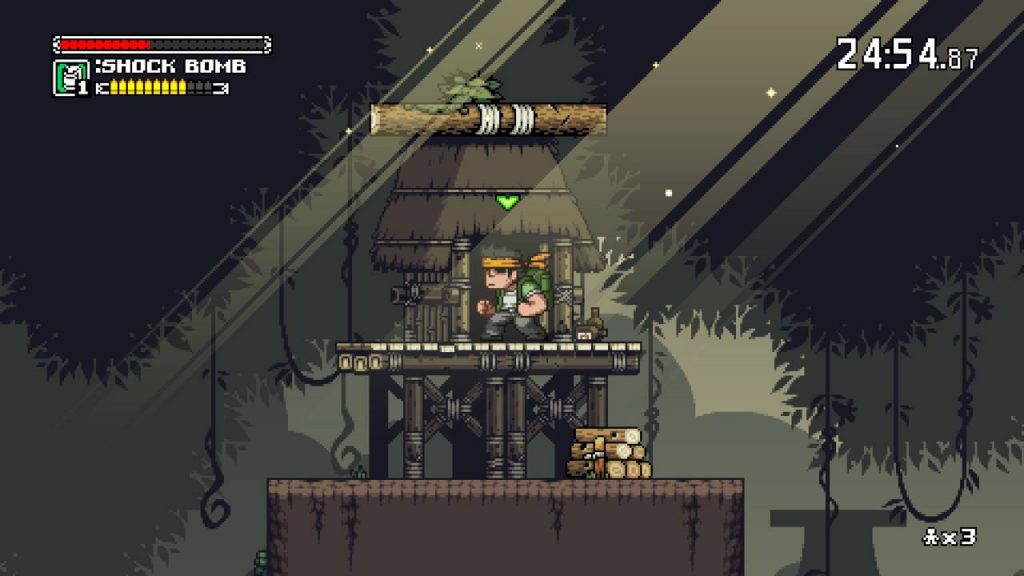 Once you’ve completed all of your enhancements and modifications, it’s time to hit the battlefield. There are usually one or two different missions types that Colonel Tasker needs completing, so it’s up to you to decide what comes first. Most missions are basic in nature and will simply require you to take out certain enemies. The more structured missions will task you with rescuing hostages or locating a fellow mercenary who’s lost on the battlefield. Some missions might even have you capturing a member of the CLAW organization.

These capture missions can be confusing at first because the game doesn’t tell you exactly what is needed to be done. After a handful of failed missions due to me killing the enemy, I finally decided to utilize one of the special weapons that I was able to purchase from Golden Gate. The mission ended in a success after that, but I felt as though this info should have been explained in the mission briefing. Locating a boss enemy was another task that was never explained. But again, after some experimenting, I finally realized that the skulls on the map determined where the boss “could” be located. It’s times like these that I wish game manuals were still around. 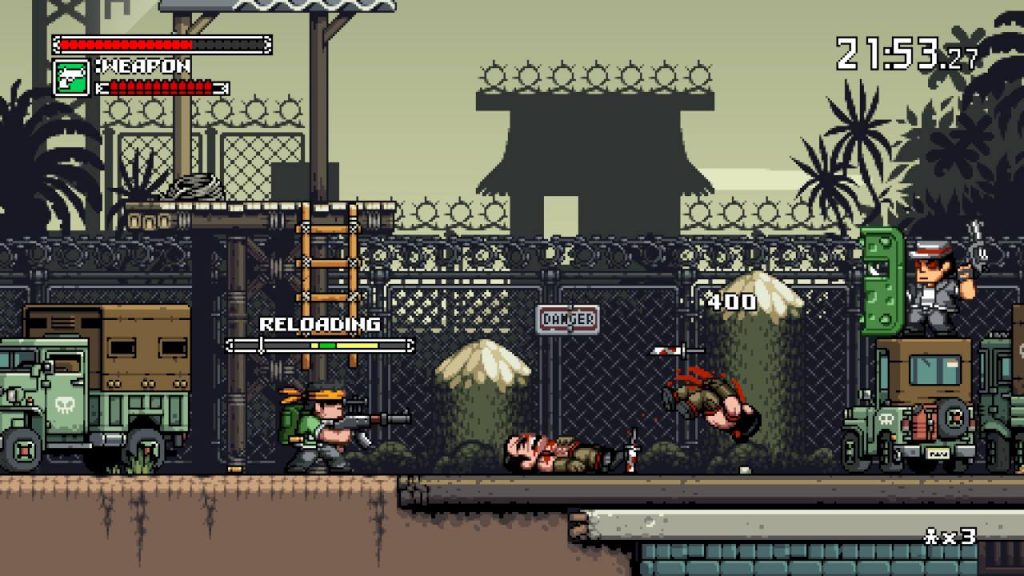 Even though you’ll be given different tasks to complete missions, some players might feel as though they’re doing the same thing over and over again. This is because the missions often take place in the same location. Not just two or three times either. I’m talking dozens of times! You’ll be fighting the same enemy time and time again because you’ll be revisiting the same map over and over. Now, there is some good to this. You’ll know exactly what enemies to expect to come across, so you’ll know what routes to avoid. But riding on the same zip-line for the umpteenth time kinda takes the thrill out of the experience. Obviously the more you progress the story the more locations you’ll experience, but they still tend to feel the same due to the game’s jungle-like setting.

I Got Your Back 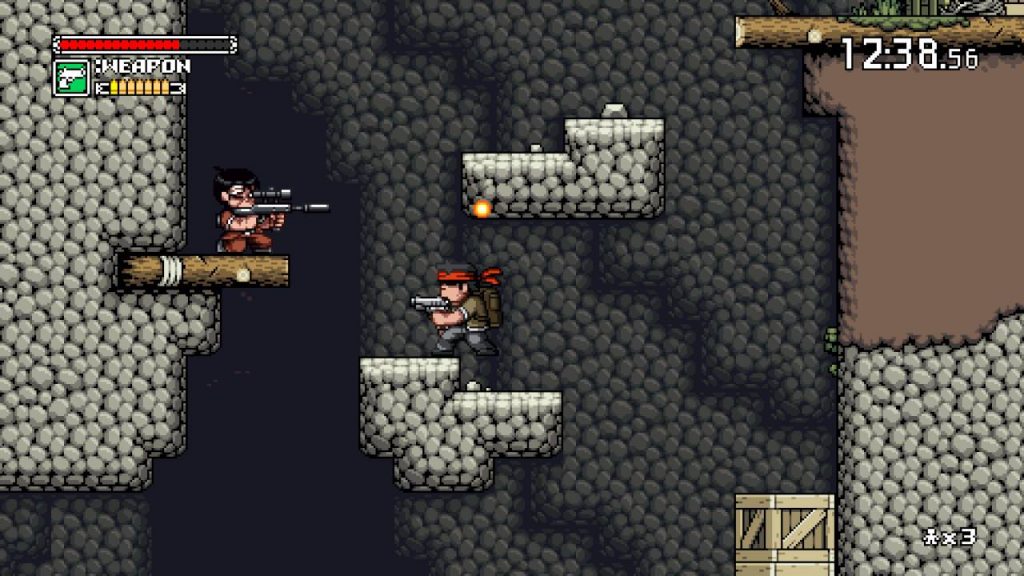 Thankfully Mercenary Kings controls like a dream so the repetition isn’t as bad as it seems. Fighting the same enemy for the hundredth time did get stale, but a quick trip to Lawless for a new gun would make everything feel new again. Maneuvering my character through the same underground passage wasn’t a chore since my character controlled exactly how I wanted him to. Jumps always felt just right, which made the platforming fun. Hopping from ladder to ladder while shooting flying robots out of the air never got stale. Gunning down enemies after popping my head out of cover was extremely satisfying. The satisfying mini-game that accompanies a reload is also fun, no matter how many times I did it.  With controls this precise, the game’s repetition didn’t bother me as much.

Get to the Choppa!

There’s also online and local co-op multiplayer fun to be had. I wasn’t able to find an online buddy to play with but I did manage to get some local co-op time in. The two player mode is presented in a split screen layout. Most of the time this wouldn’t be an issue, but this layout dedicates the whole bottom of both screens to the stage’s map. It’s very off-putting and makes everything feel claustrophobic. Hopefully, more people pick this up and jump online, because playing with a full screen is a lot more fun.

If you consider yourself a fan of retro gaming you need to give Mercenary Kings: Reloaded Edition a try. It’s like they took two of the most beloved retro run and guns – Contra and Metal Slug – and added a crafting system. As long as you don’t mind a little repetition, you’ll get a ton of enjoyment out of this title. If you’re a big fan of games packed with charm, you NEED to play Mercenary Kings: Reloaded Edition.

Full disclosure: This review is based on a copy of Mercenary Kings Reloaded Edition given to Hey Poor Player by the publisher.

The Sexy Brutale: Full House Edition Deals A Winning Hand I have to confess, while I love a good adventure/puzzler as much as the next guy, I never got…