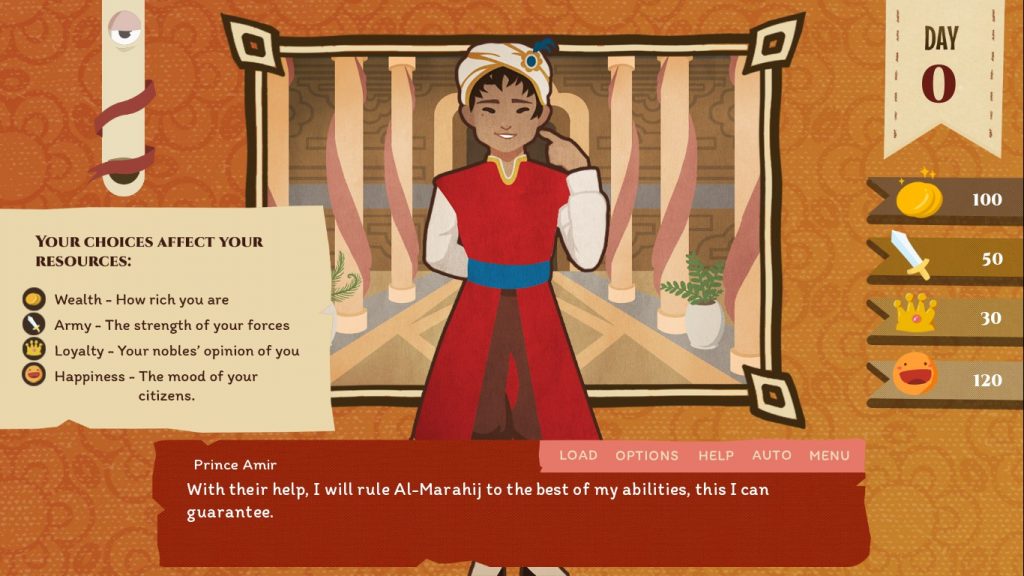 I suppose the my first impression of Your Royal Gayness came from the title, which certainly left a questionable feeling in my ears. When I first heard of this game, I knew it could go one of two ways. I did feel a little better about it immediately when I learnt it was created by other queer people, which did lead me to assume that the silly pun was nothing but a silly pun. And be prepared for silly jokes and moments, because this game is full of them!

As a queer person living in Finland, I felt obligated to play this game. After reading the Kickstarter page, I can see that a lot of effort and sacrifice went into this game, which is incredibly admirable. Your Royal Gayness is a first title for Finland based creators Lizard Hazard Games, and regardless of what I or any other critic thinks of their work, they should be very proud of themselves overall. 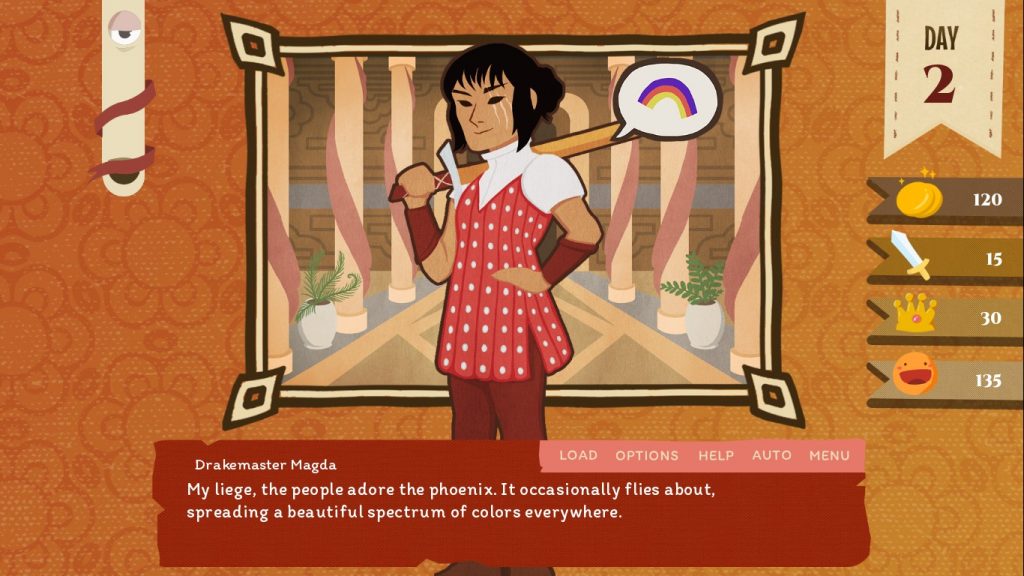 Your Royal Gayness is a kingdom management game with LGBT themes. Your parents have gone out of town for sixty days and left you, the sole heir, in charge. During that time you must make decisions and solve your kingdom’s problems, while keeping your loyalty, resources and army in a positive balance. If one of these stats remains negative for too long then your parents will come back early (which means Game Over, man!) Decisions you make will affect these stats, along with the happiness of your people. The problems are often quite silly, such as Eugene’s farm having a magical portal that spits out goats. These moments give this title a certain charm, letting the player know that it doesn’t take itself too seriously.

I’ve played a lot of games that promise your decisions affect the course of your story. Then I play the game, find that the decisions don’t affect your playthrough that much, in that you’re still playing a linear narrative, with most of your decisions just shots in the dark. You might as well flip a coin deciding what road to take, making the whole thing more of an annoyance than an appeal.

So Your Royal Gayness claims that your decisions affect your storyline. And I can confidently say: they really mean it! The scenarios come up at different points in the story, making the gameplay different each play-through, so you really have to be prepared for any random scenario and can’t prepare for an event you know is coming. A feature I really like and one I would recommend for your first play through is “choice hints” option. As I mentioned, I don’t enjoy games where all your “freedom” and “choices” are just shots in the dark that can result in your demise or the game ending. It just makes the first few hours of game play trial and error, and while I admit that I probably do spend too much time lying around doing literally nothing, I like to think my time is more precious than that. The choice hints just give you a small indication about what will be affected by your choice. If you don’t like this or feel that you no longer need it- then just go into options and simply turn it off.

Where is the Royal Gayness? 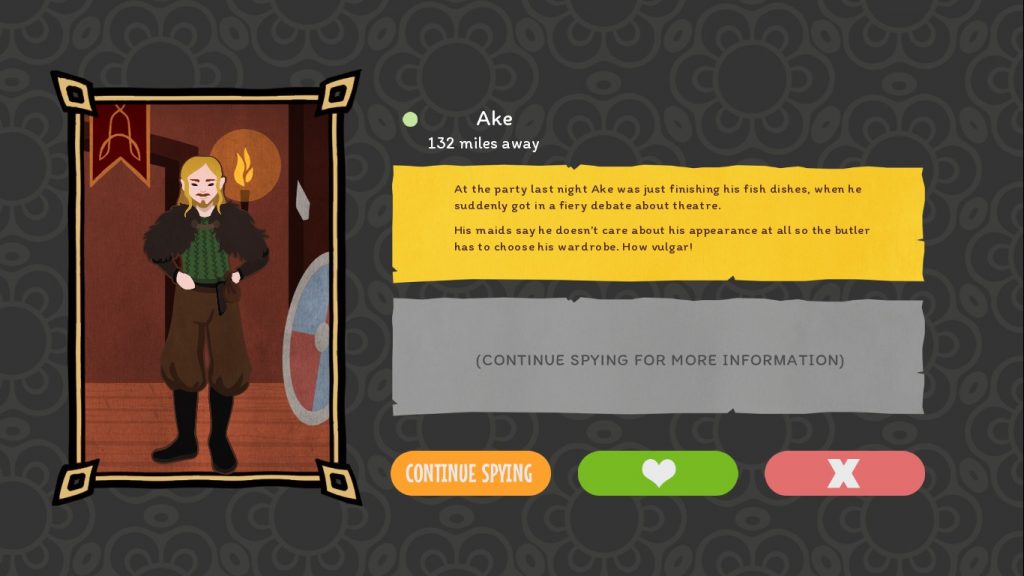 A key part of the story is that Prince Amir is gay and isn’t ready to let everyone know quite yet. To prevent everyone finding out, you must keep your suspicion meter low and give excuses to Princesses about why you cannot marry them, my favourite excuse being: “the sauna is on and I wouldn’t want to waste the firewood,” (#suomalaisiaongelmia!) From a queer prospective, I found all of this quite funny and somewhat relatable. I kicked ass at giving excuses to the Princesses! You have the option of spying on them to find out their likes or dislikes, so you can give the right excuses and keep suspicion down, but I never needed this! I don’t know what that says about me or my past, but I like to think I should be proud of myself for my killer excuse-giving skills!

As well as spying on Princesses, you can also spy on neighbouring Princes, in order to find a prospective boyfriend. You certainly don’t have to do this, especially as all Princes and Princesses are randomised making them different with each play-through. However, if you chose to, you can spy on the Princes first to find out if they are also gay, and their likes/dislikes (knowing these is pivotal to wooing them). What I do like about this is something that is present in a lot of dating sims from the last few years, in that romance isn’t always inevitable. Unlike in The Sims, where if you bug someone enough they’ll eventually go out with you, you have to pay attention to your choices, otherwise the Prince won’t want to be your boyfriend. Personally, I think this gives you a lot more motivation to go explore the romantic side of the game and makes it more interesting. 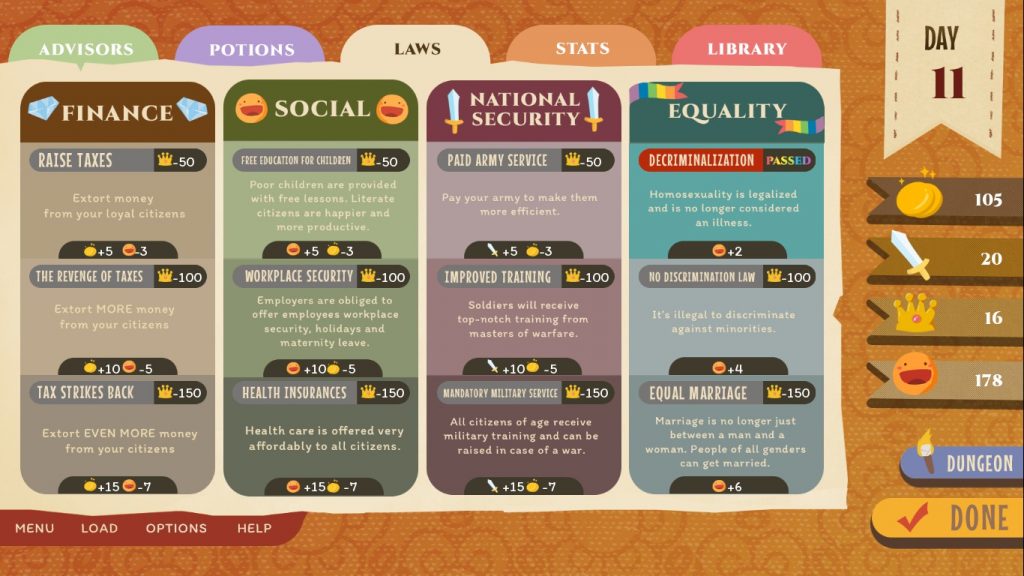 As I mentioned earlier, you have several stats that you have to maintain while running your kingdom. Resources can be used to fund projects of your kingdom or come to the aid of others, army determines the security of your kingdom and loyalty can be used to pass laws that affect how your citizens see you. Among these laws are decriminalizing homosexuality and anti-discrimination laws. With each law passed, you’ll get letters from citizens both praising and criticizing your decisions, because you can’t please everybody!

This element does give Your Royal Gayness something that lots of games promise but not all deliver on: a strong replay value. There are so many laws you can pass, you can’t possibly pass them all in one play-through. After I’ve finished this review, I probably will replay the game because I want to know how passing certain laws goes down and what happens if your suspicion meter gets too high! There are so many paths to go down and elements to explore, it adds a lot of adventure to the game. It’s because of this that I feel Your Royal Gayness could appeal to everyone, and not just the LGBT/SAGA community. Granted I can’t speak for the straight community, but behind the queer themes is a pretty solid kingdom management game that I think could be enjoyed by anyone who likes this genre. 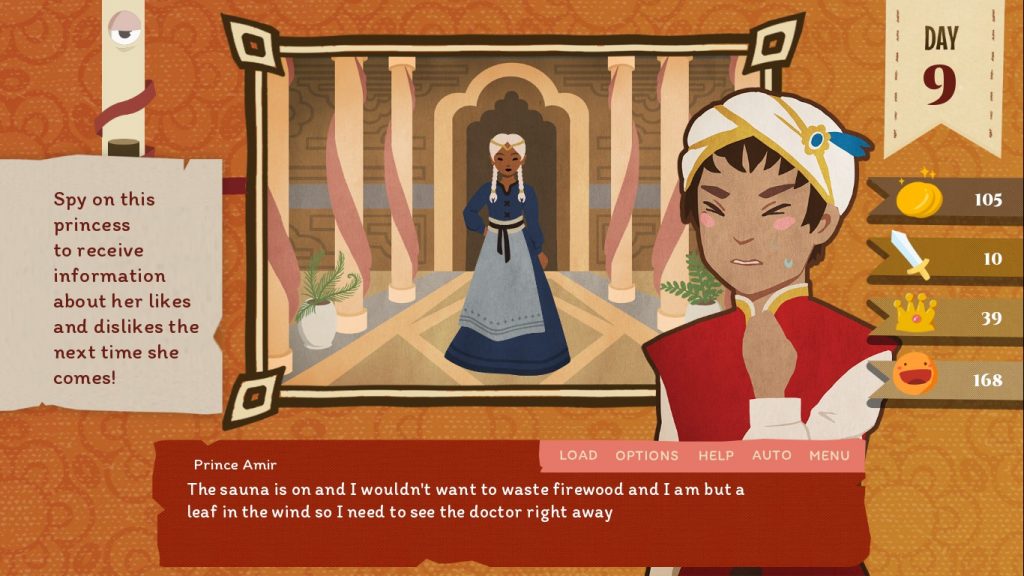 Having said that, the game does come with some drawbacks. Your tenure as steward of the land only lasts sixty days, so it moves very fast. Despite this, options in management mode often take days to complete. Because of this, points accumulate very slowly. This frustratingly gradual stat accumulation could be improved slightly by cutting down the amount of time needed to gather stats. Even if your Spymaster gathered loyalty in one day rather than two, it wouldn’t make the game any easier or harder, as you still wouldn’t be able to unlock all of the laws, but it would allow you to achieve more in the time. As it is, this could discourage players from pursuing romances with Princes or spying on Princesses, as you need your Spymaster for this and they can only focus on one task at a time.

This also means that if something starts to go downhill, there is very little time to recover. For example, at one point my kingdom’s resources went negative after one sudden event caused me to lose forty points. I immediately tried to improve this by sending the Drake-master off to gather funds (after she returned from gathering army stats), but with only a few days until the dreaded return of the royal parents, I didn’t have the chance to totally fix the problem. Weirdly, I feel like this could be easily fixed. There’s a amount of save spots, but you can only use them once every seven in-game days! The rest of the time, you can only save in the autosave spot by retreating back to the main menu. If you could save whenever you pleased, you could save after important decisions and go back to that save if you needed to. Either that or they could remove scenarios that don’t give you the chance to fix. If a game throws you an obstacle, it’s usually a given that there is a way around it. But if something occurs that causes you to lose forty points, so you need to regain twenty in three days or you’ll lose the game, there should be some way – no matter how difficult – of gaining those points. I don’t feel like Your Royals Gayness gave me that chance.

While Your Royal Gayness has thankfully few glitches, it does have one major one that I can’t ignore. If you explore the dungeons without having any prisoners, a fatal error will occur and a frankly frightening grey screen will come up! My date and I went down to the dungeons to look at the prisoners, because obviously that’s the most romantic date anyone’s been on ever, but because I didn’t have any prisoners, the game bugged out. It may be the only glitch I noticed, apart from the narration text moving on occasionally before I clicked “next”, but it’s one the creators really should address! 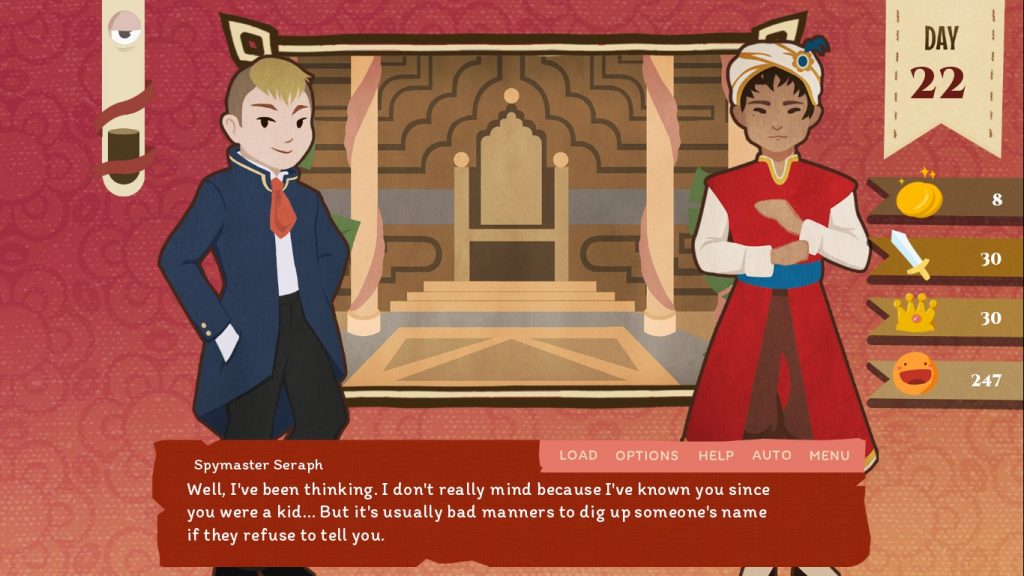 Your Royal Gayness does come with a wide range of characters, all of whom contribute something positive to the game. Perhaps the most notable character being your Spymaster Seraph.

Seraph is a a gender-neutral or genderfluid character (we’re never explicitly told), who refuses to discuss or reveal the gender they were assigned at birth and uses “they” pronouns. I really enjoyed this as there are so few trans characters in gaming, and even fewer genderqueer characters. There is even a very important moment in the game when Prince Amir uses Seraph’s deadname, leading them to politely explain why this isn’t acceptable, after which the Prince apologises and they both move on. I love this moment as I find that even some queer people don’t understand how important things like correct names and pronouns are. It showed the main character, a gay person, make an gender related mistake.

I feel that this moment is encouraging to cispeople, like “hey, it’s okay, we all make mistakes, just learn from them”, while at the same time making it clear that “this is not okay!” And obviously it’s important to get through to allies that using a deadname is never acceptable, no matter what the context or reason. Just don’t do it!

Overall, Your Royal Gayness is fun! I had fun playing it, and it certainly stands up as a management game. I’d recommend it to someone who enjoys management games and I’m always happy to see more queer themed games!

Full disclosure: This review is based on a retail copy of Your Royal Gayness 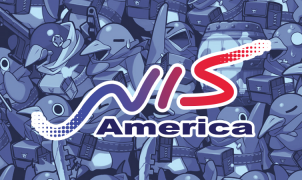 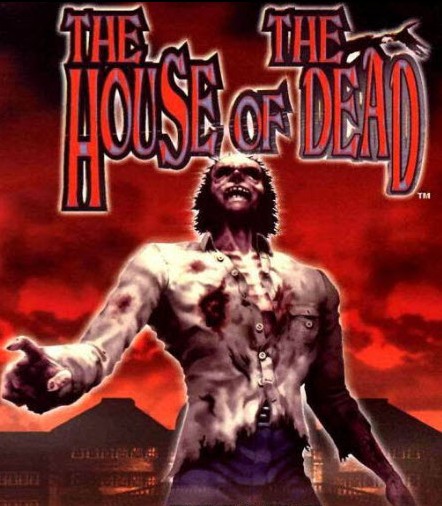