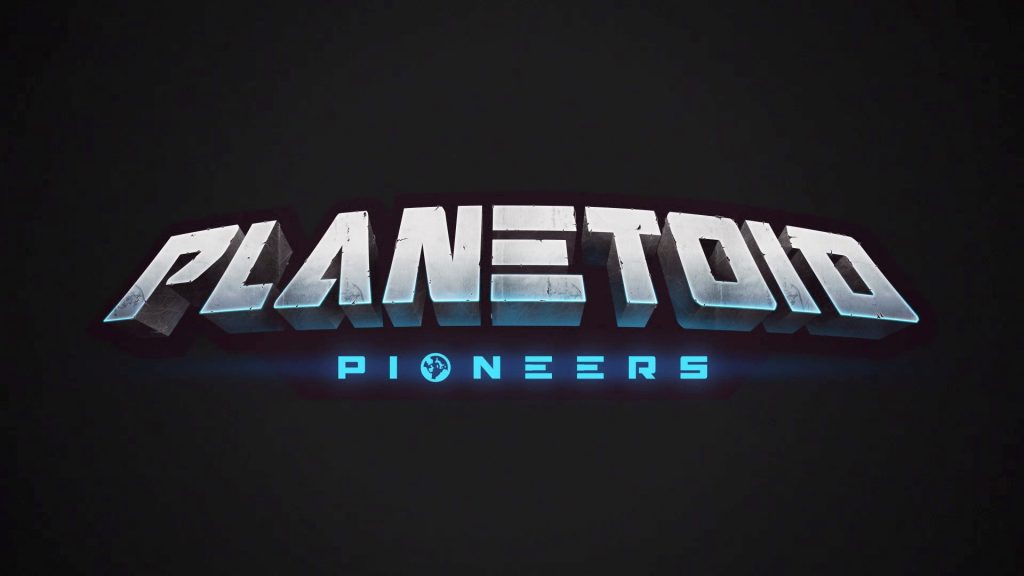 “What exactly am I doing, here?” That was one of several questions that I found myself asking repeatedly while playing Planetoid Pioneers. It’s not that I didn’t understand the game, or it’s concept, or anything. Give me a little more credit than that. It’s just that, regardless of what I was doing, everything felt… how do I even describe it… vaguely empty? I didn’t feel particularly feel as though there was reason behind most of what I was doing. Of course, “reason” isn’t generally something you think about when playing a video game. You play games because they’re fun. And I think that that was part of the issue, too. Sure, the game has a neat premise. But it never managed to hook me. And I think that, ultimately, it was the combination of those two things that left my reception of the game lukewarm. 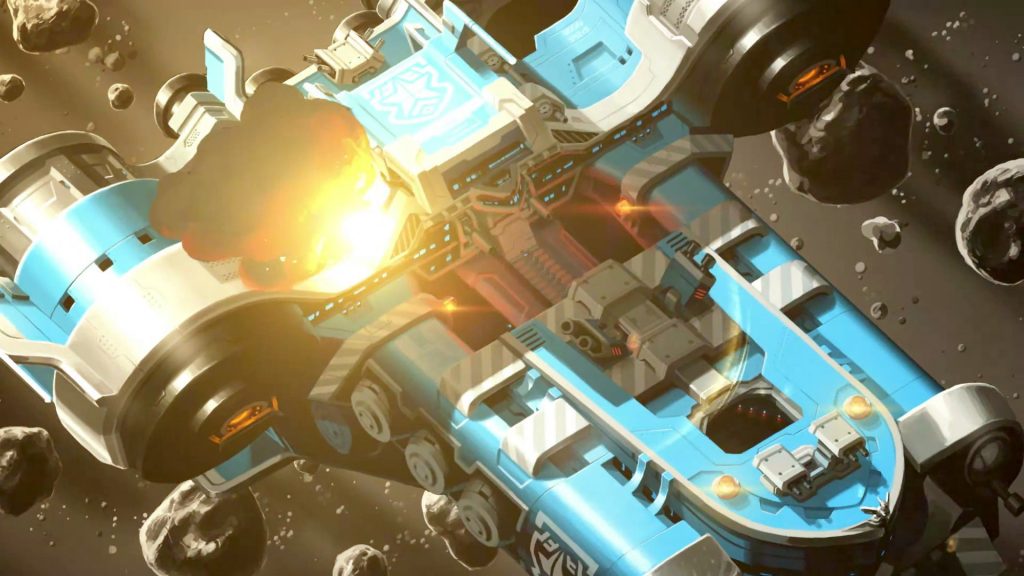 Planetoid Pioneers‘ story isn’t particularly in-depth. The game begins with protagonist Crazy Bob, an elderly astronaut lazily floating in the middle of an asteroid belt when, suddenly, a section of his ship explodes (don’t ask why, I’m not entirely sure myself). Doing what any sane-minded individual would do, the galaxy-faring grandpa hops into an escape pod, and jettisons toward a nearby planet. Although safe for the moment, Crazy Bob now finds himself at the mercy of this new hostile, alien world, and must do everything in his power to find a means of escaping.

Intro aside, Planetoid Pioneers doesn’t focus much on story. In fact, you probably won’t even have control of the game’s original protagonist for long due to how the game’s re-spawn system works. Instead coming back to life as the same character, should you meet an untimely end and need to continue, the game instead gives you control over what appears to be a test dummy. You know, like the ones they use to test safety features in cars. Or a skeleton, if you make one. Considering how the rest of the game plays out, I guess it isn’t a big deal. Still, if you’re hoping for continuity in a game like this then you’d better look elsewhere. 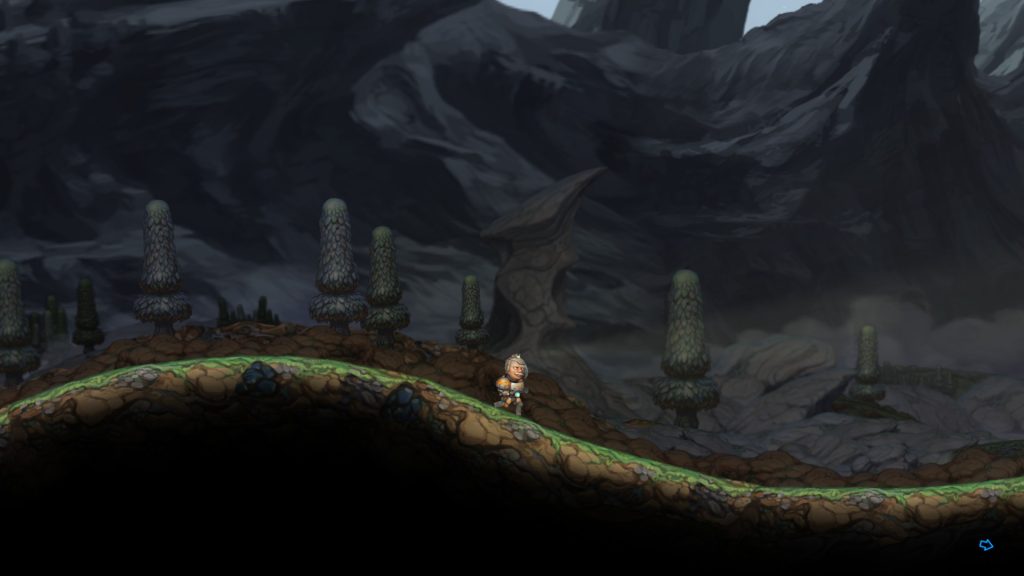 Pioneers wobble, and they DO fall down.

In many ways, Planetoid Pioneers is akin to a standard Metroidvania. It’s a platformer with a large, interconnected world which players are meant to explore as thoroughly as possible. To be fair though, this game isn’t quite as linear as other games in the genre. Although it gives you a goal — to find a means of escape — it doesn’t do much in the way of guiding you most of the time. Instead, you’re meant to explore — and experiment with — your surroundings. Both the progression speed and the way in which progression is actually made, are largely left up to the player. And, thanks to the game’s incredibly intricate building system (which we’ll get into later), there are a good number of ways to go about doing just that.

Unique pacing isn’t the only thing that sets Planetoid Pioneers apart from many other Metroidvanias. This game also relies on physics. Too much, in my opinion. For starters, there’s your character. I know that he’s supposed to be old (or a robot, or a skeleton), but that isn’t a valid excuse here. It literally feels like the character you’re controlling is drunk. Like, really drunk. It’s incredibly difficult to get your character to stand still, unless on a completely flat surface (and even then it doesn’t always work out), and climbing hills or stairs can be a chore too. Not only does this make things difficult when the need for precision arises, but it also makes building things difficult due to the fact that the screen constantly moves around to center on your character. I’m more than okay with a physics-heavy game, but having a (physically) stable character is important. 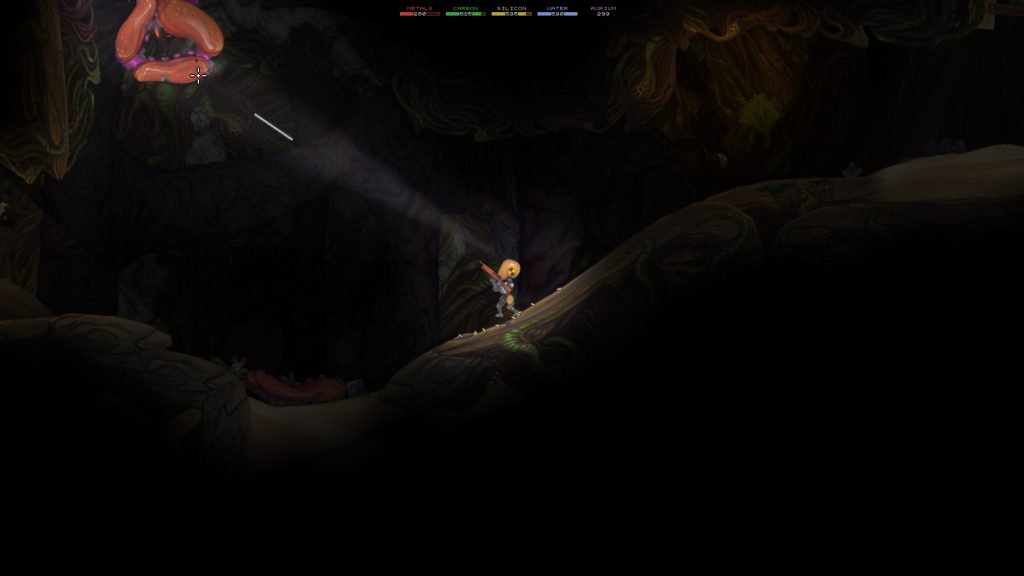 While exploring the perilous depths of the planet you’re on, you’ll also undoubtedly come across a number of interesting creatures. Creatures who will most likely want to kill you. So you’d better get used to defending yourself if you want to survive. Fortunately, fighting is quite simple. You point, and shoot. That’s it. Due to what I’m assuming is the game’s physics engine working the way it does, fighting is more frantically shooting at things while standing in place rather than actual combat. I think that the simplicity works to the game’s advantage, though. Given how physics-heavy this game is, things like complex enemy attack patterns, or the ability to backflip or wall jump, wouldn’t go over too well.

Building Bridges (and Other Things) 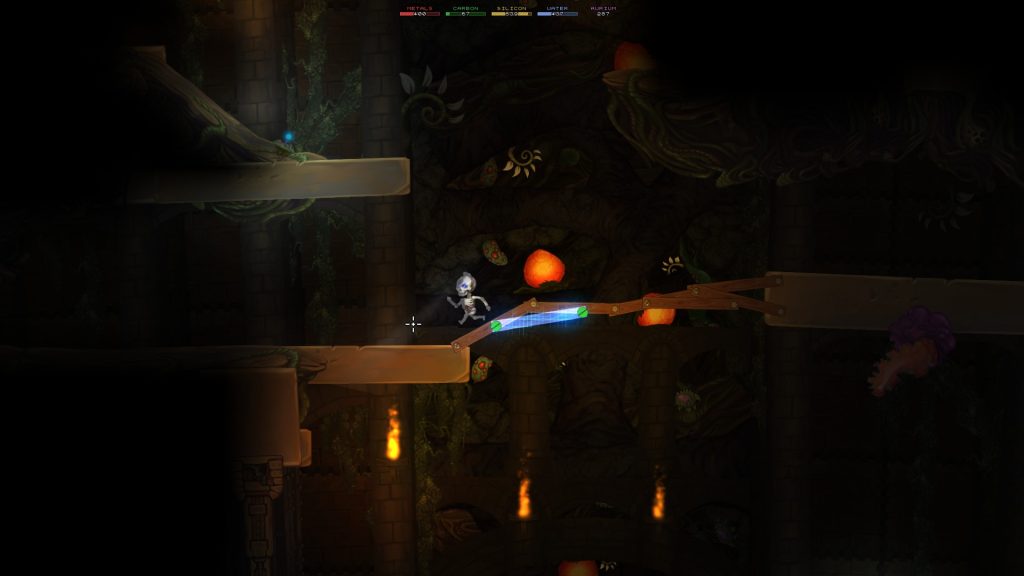 I promise that there’s a reason why this “bridge” is so poorly-constructed.

Along with its platforming elements, Planetoid Pioneers also heavily focuses on crafting. Well, I guess the game calls it “assembling”. Whatever you want to call it, it’s there. And it’s important. Chances are in this game that, if you want to get somewhere, you’re going to have to build your way to (or in, or over, or under) it. Actively assembling objects in and around your environment is integral to both gameplay and progression. It’s not as easy as clicking and dragging whatever objects you see fit around your environment like some sort of demi-god, though. You’ve got to work for what you want!

Although many different tools will become available to you throughout the game, your most important one will always be your trusty Atomizer. Simply put, your Atomizer is a gun that can break down nearly every object in the game into its core components. Atomizing something does two primary things. First, it fills up the scan meter for said item. Filling up the meter all the way will allow you to create that item yourself. Each item requires a varying amount of scans, and many take a while to scan all the way, so it’s important to atomize items whenever you can. You know, unless you’re using them or something. Atomizing an object will also grant you varying amounts of resources (Metals, Carbon, Silicon, and Water) which, you guessed it, are used to assemble items. 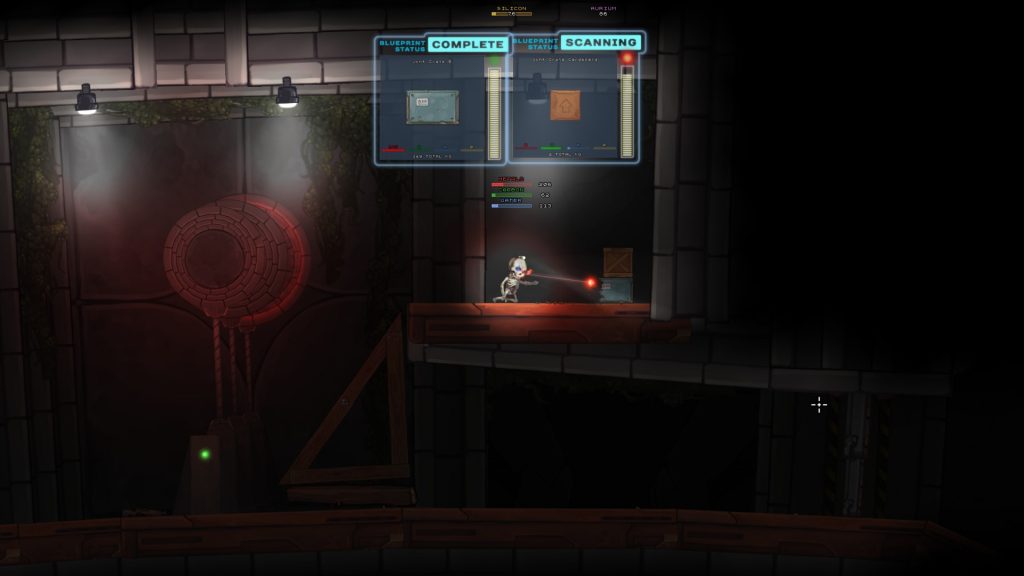 When in doubt, scan it out!

For the most part, the crafting system seems to be well thought-out. The game only allows you to assemble items if they’re relatively close to you, and also won’t let you do crazy things like craft items a floor below where you’re standing. Items that are attached to one another also behave as expected. And, best of all, there are plenty of things — ranging from weapons, to vehicles, to monsters — to craft (although that doesn’t necessarily guarantee a whole lot). Unfortunately, things aren’t wrinkle-free. Throughout my various adventures, I found myself running into a handful of loading related issues. And boy, were those annoying.

There are times when the game seems to load objects either out-of-order, or incorrectly. For example, at one point I was in the middle of building a rather complex (albeit somewhat sloppy) bridge. I ran out of resources partway through, backtracked to collect some more, and came back. Instead of seeing my partially completed bridge, however, I was met with nothing — until the entire structure haphazardly popped back into existence a split-second later, and immediately (and loudly) tore itself apart. That wasn’t the only time something like that happened, but it was certainly the worst. A structure collapsing due to shoddy craftsmanship is absolutely okay. A structure collapsing because the game loaded it incorrectly is absolutely not. 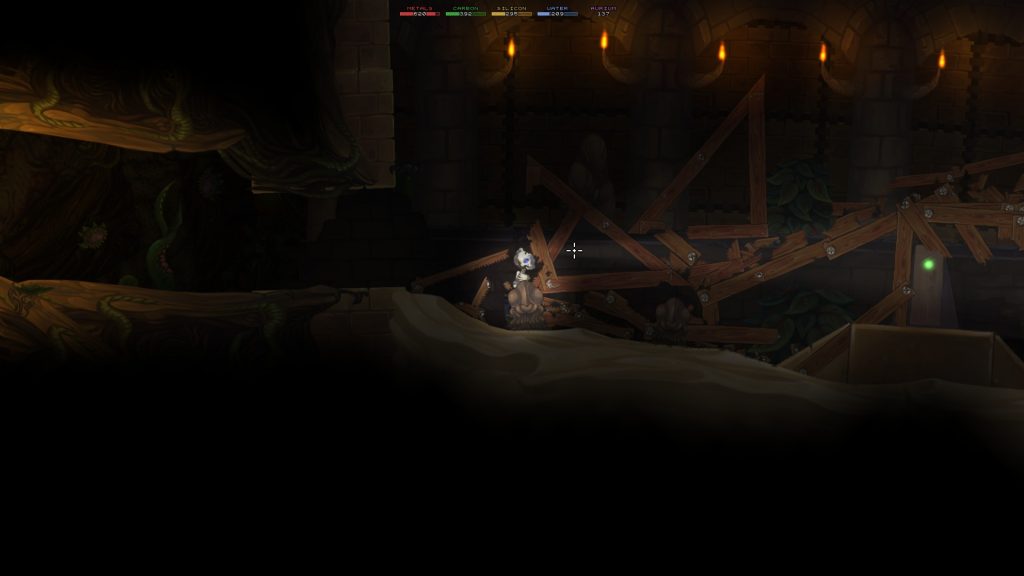 There’s one final thing that I’d like to address; user-created content. Or rather, the emphasis placed on it. Planetoid Pioneers itself allows you to atomize and assemble pretty much everything in it. But it doesn’t stop there. Players are also able to create their own objects (inanimate or otherwise), to use and share with others in the game. The tools are ridiculously complex, and if you don’t have any prior experience then I doubt you’ll get far. I certainly didn’t. But for those who have the knowhow (and patience), there’s plenty that you can do with the in-game editor. Sounds neat, right? It is! But it’s also a little worrying.

Despite the fact that the game does offer players a lot of objects to play around with, it still often times felt empty. I didn’t use most of what I scanned. It wasn’t because I didn’t know how to use them, but because they often times weren’t necessary to use. Or even enjoyable. Planetoid Pioneers seems to be aware of this problem. Instead of trying to flesh itself out, however, the game seems to be bolstering itself through user-created content. To an extent, that’s fine. It’s a great way of potentially bringing in a bigger crowd. But I don’t think that you should bank on it. I don’t want a shop that sells random user created content. Instead, how about a shop that sells official, in-game items? Or just actually teach me how to use the editor myself? At least I know what I’m getting into that way.

The Sum of its Parts

Planetoid Pioneers falls flat in too many places for me to enthusiastically recommend it to anyone. I don’t think that it’s a bad game, though. It certainly has a fair amount of charm, and I do think that those with enough creative flair can easily fall in love with a game like this. It certainly didn’t end up being what I had initially imagined when I had first heard “physics-based Metroidvania”. Then again, expectations and reality very rarely line up.

Full disclosure: This review is based on a copy of Planetoid Pioneers given to Hey Poor Player by the Developer 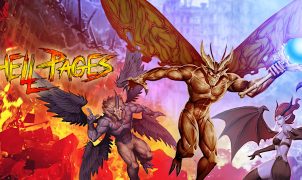 Hell Pages Review: Save The World By Killing Everything   Generally when I think of Shmups, I  envision far future settings, bleak and dystopian. But I can say in…