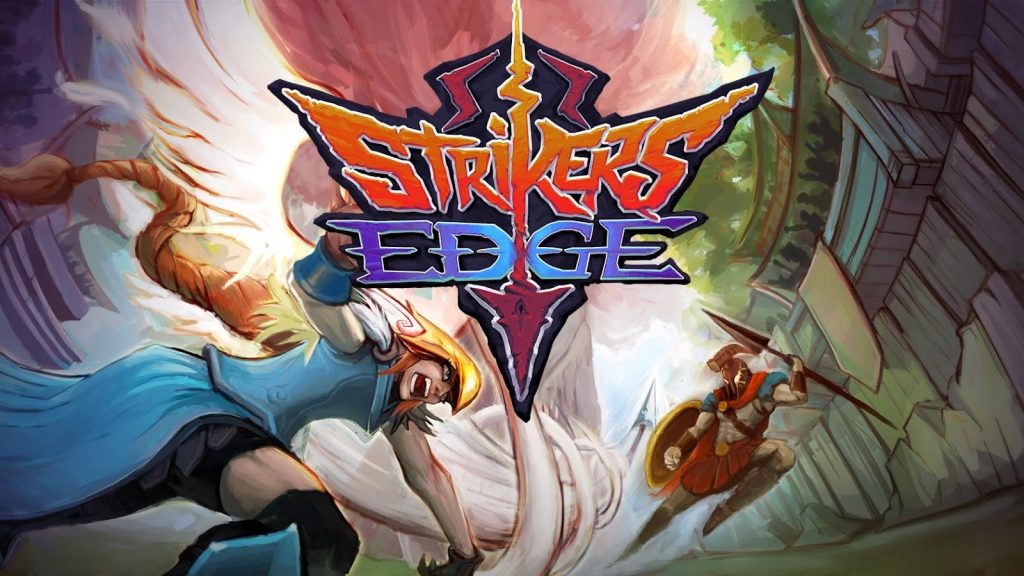 It’s been exactly one week since I previewed Strikers Edge which, after thinking about it, is actually the shortest amount of time between a review and a preview that I’ve ever encountered. Needless to say, not much has changed between then and now. That’s not necessarily a bad thing, though. Since I was already so familiar with everything that was going on, I was able to get into it again very easily, and had just as much playing dodge ball to the death as I did before — even more so, as I started to get better (but that’s usually how things go, I guess). And, after spending even more time with this game, I can once again confirm that it’s pretty solid overall. 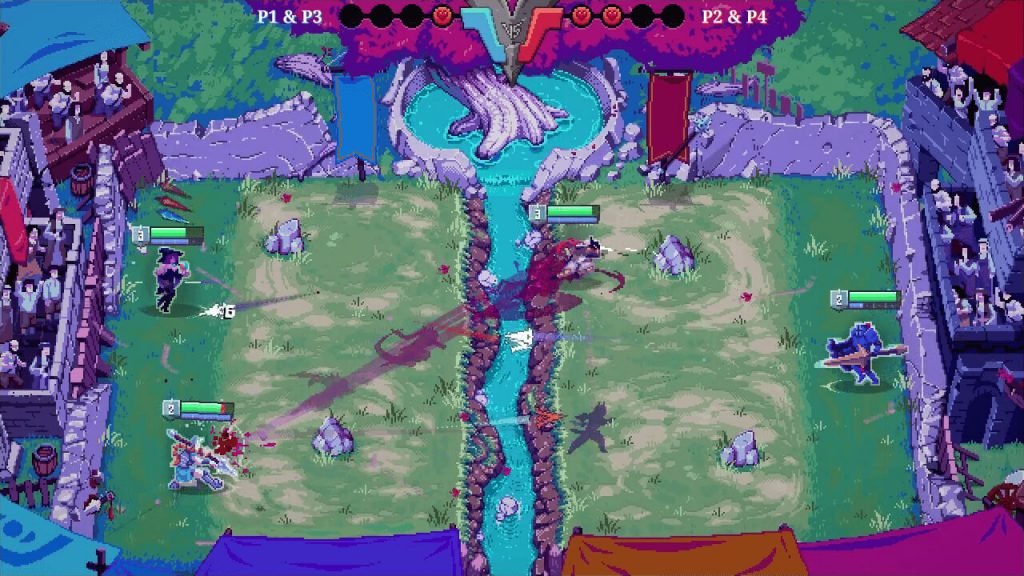 Yes. This is exactly what I remember dodge ball being like.

You know what dodge ball is, right? You throw a ball at your opponent, while dodging what they throw at you. If you tag them, then they’re out. If they tag you, then you’re out. It’s a simple (albeit potentially painful) game. I’m sure that most of you out there have played it. Well, that’s essentially what Strikers Edge. A good, old-fashioned game of dodge ball. Oh, except you can use things like swords, bows, and magic. And you’re also trying to kill your opponent. …Okay, so it’s not exactly dodge ball. But it’s close! And that’s because the same basic premise applies to both games.

Like with dodge ball, Strikers Edge is all about hurdling projectiles in an attempt to tag your opponent out (of this mortal coil). That’s where things start to diverge between the two games, though. Rather than tagging an opponent out by hitting them once, the goal in Strikers Edge is to completely deplete your opponent’s HP bar. For the most part, you’ll be doing this through standard attacks. Each playable character within the game is capable of throwing (or shooting) a projectile which, regardless of what said projectile may actually be, does a hefty 10 damage to your opponent if you can land a hit. And, if you’re good enough to pull off a headshot, you’ll do an extra few points of damage. Special attacks are also available, but we’ll get to that later on. 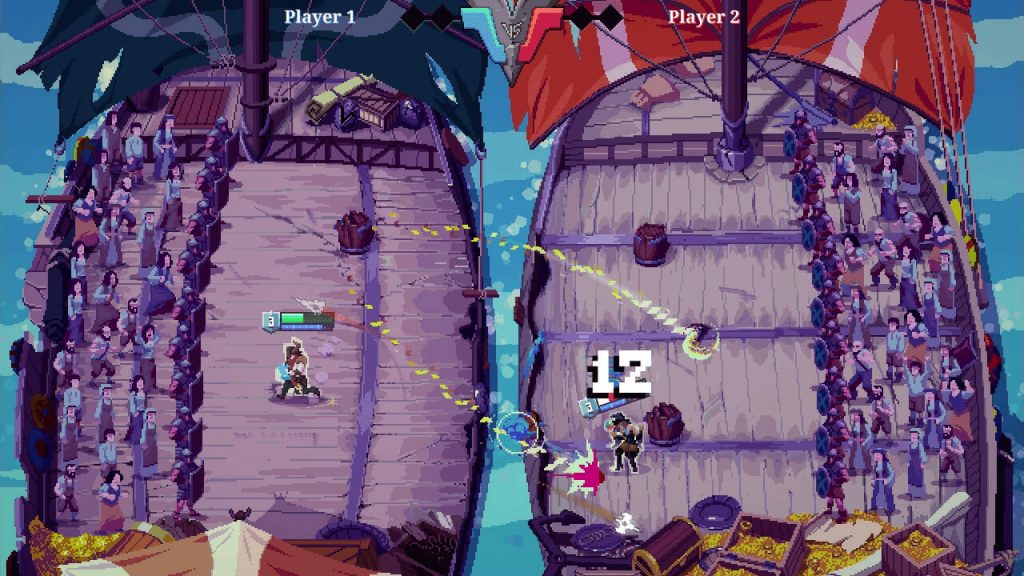 In Strikers Edge, there’s no need to worry about ammo. Every character has an unlimited number of projectiles. What they don’t have, however, is an unlimited amount of stamina. Every action that you take — aside from walking and defending — uses up stamina. A lot of stamina. Because of this, the game forces you to play strategically. And trust me, a little bit of strategy goes a long way in Strikers Edge. Rather than launching an exhausting volley of inaccurate attacks, it’s best to focus on where your opponent will go and aim accordingly. Obviously aiming is easier said than done, especially when you’re trying to hit your mark while making sure that your opponent doesn’t hit theirs, but the generous sight provided to you by the game prevents things from ever becoming frustrating or unfair. And landing accurate hits helps you avoid tiring your character out that much more! 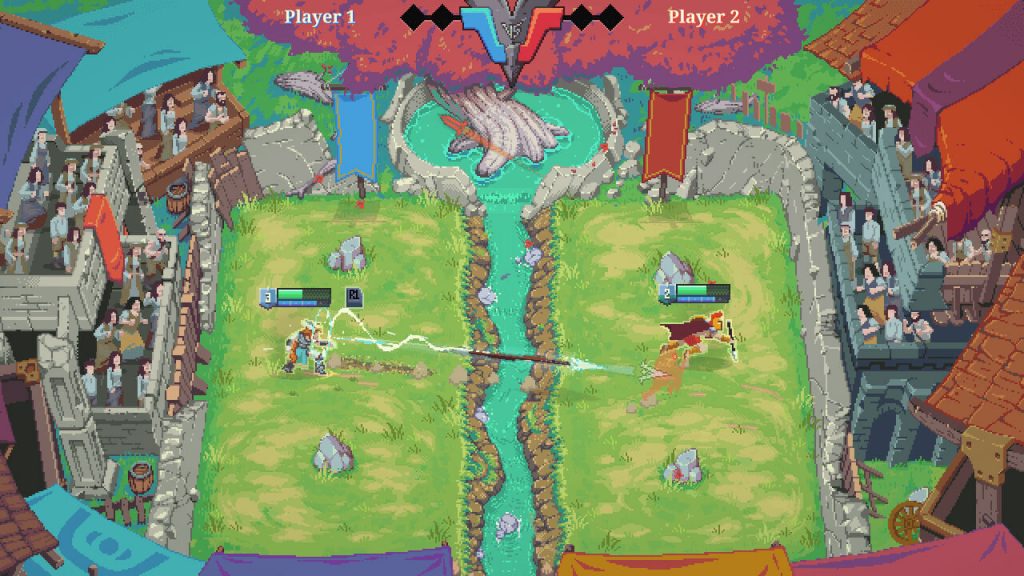 If you aren’t actively trying to kill your opponent, then you’re probably trying to avoid being killed. Naturally, that means that it’s important to be just as familiar with defense as you are offense. Playing defensively isn’t difficult in Strikers Edge. In fact, there are only two defensive maneuvers available to you. The first is the quintessential dodge roll which, when performed correctly, can mean the difference between living to fight on, or… not. Surprisingly, dodge rolls can be a little tricky. Due to the fact that they have both a post-roll delay, and a small recovery time, you can’t dodge willy-nilly. Instead, you need to save those supersonic spin dashes for when you need them the most. Which is right before being impaled by a sword. Or an arrow. Or… well, you get it.

If dodging isn’t your thing, you can also defend. Like dodging, defending takes proper timing (which isn’t all too difficult to get down). While defending does grant you absolute immunity to an attack, there is a catch — you can only do it three times. Each character has what I can best describe as a “defense gauge” (represented by a small, blue shield), that shows how many more times they can defend. This gauge does charge over time, but does so very slowly, so it’s best to save blocking for when it’s absolutely necessary. I personally find the severe limit placed on blocking to be kind of annoying, but I do understand it from a technical standpoint.

The Spice of Life 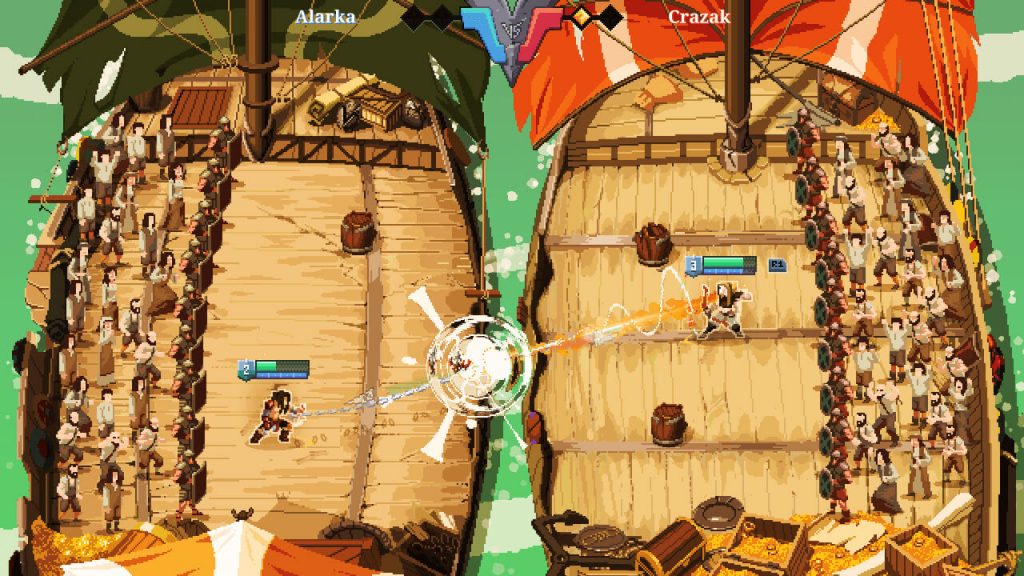 Be sure to learn the ins and outs of each character!

Strikers Edge‘s does nicely with its character roster, presenting to players a clear case of quality over quantity. Each of the game’s 8 playable characters are split up into one of three different classes, which favor offense, defense, or healing. Amusingly enough, regardless of which class your character is, their “class abilities” all seem to be activated by blocking (another reason why you can only do that so many times). Some abilities — like healing and shot reflection — end up being a lot more useful than others — like temporary stat boosts — but not so much that it unbalances gameplay.

Where each character’s individuality really shines is with their special attacks. Along with standard attacks, characters can perform a special by holding down the attack button. These specials are vastly different from one another, and each boast unique effects which range from Urgül’s chain which can pull in enemies, to Haru’s ability to teleport to the opposite side of the field for a quick melee attack. The setup required in order to master each character’s setup differs a noticeable amount, making it fun and rewarding to play with each of them. 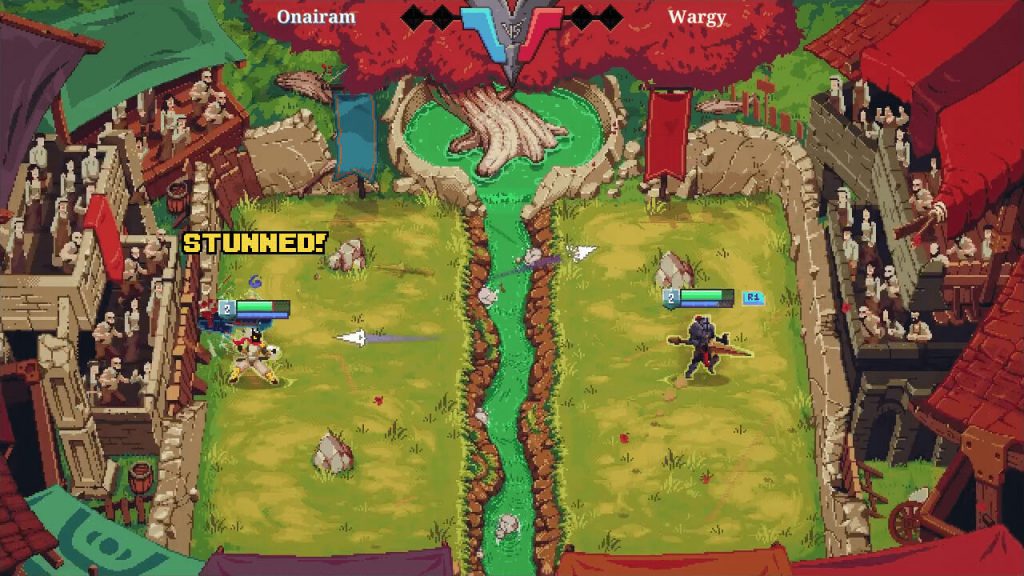 Many special attacks are capable of inflicting status effects.

Certain characters also have additional properties, but you’re not going to find that out by reading about it in the game — a fact that I take issue with. In some games, an “air of mystery” is fine, but Strikers Edge is largely designed to be multiplayer. And in multiplayer games, knowledge is power. Having to guess and theorize, even if it’s only a little bit, ends up being cumbersome. What I find strangest, however, is that the very same descriptions I’m asking about are on the game’s official site. Why not just put those descriptions in the game, if they’re already online? It doesn’t make a whole lot of sense, if you ask me. 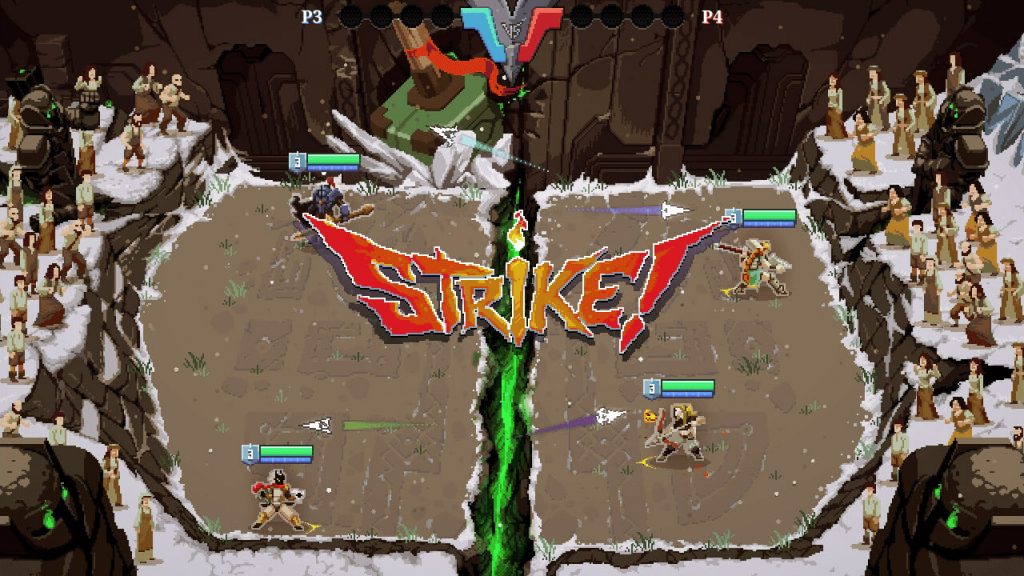 At least the courses come with pallet swaps…?

Strikers Edge may do nicely with its characters, but other areas aren’t quite as well-rounded. In contrast with its 8-character roster, the game only offers four courses. This, in my opinion, is far too few. I’m aware that this is an ironic statement to make, as I actually complimented the game on this in my preview. But that was a preview. What I was playing wasn’t (supposedly) the full version of the game. I’m not trying to be harsh. I wasn’t ever expecting the game to triple, or even double, the number of levels available. But offering up all four courses before the game is even out and then not even following the full release up with a single extra course left me disappointed.

Before lamenting “what could have been” any further, I’ll give credit where it’s due. Strikers Edge‘s campaign mode has a surprising amount of versatility. Although short, each character has their own unique story, following their exploits after coming into contact with a power-bestowing Godsblood crystals. Along with the character-building present within each story, certain campaigns also feature unique battles, like 2-v-1s, and doppelganger fights. Many of them also end with cliffhangers, making you want to learn more. 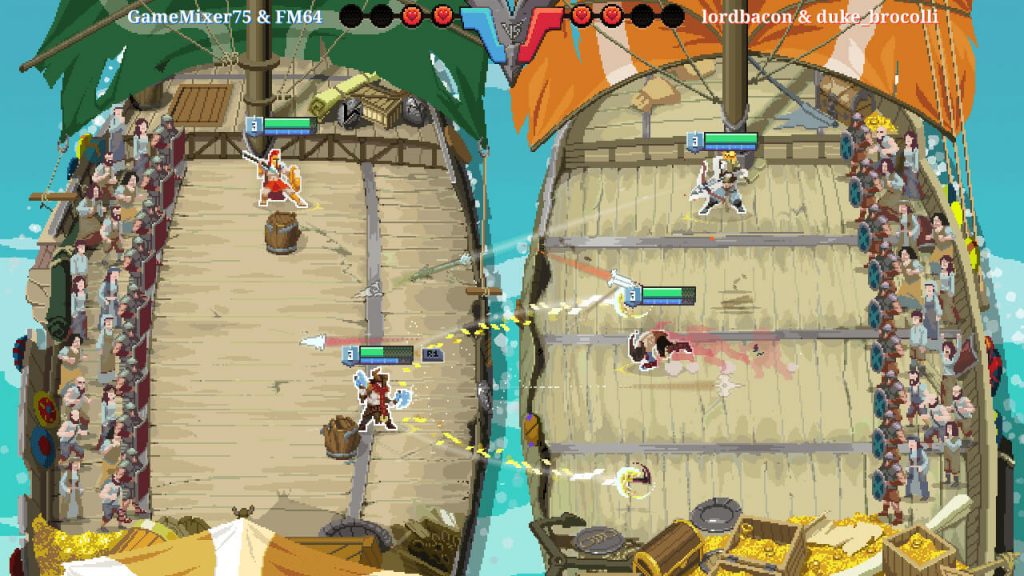 4-player matches are a lot of fun… when you can find people to play with.

That’s where the single-player shenanigans end, however. There’s no free-play, and practice mode is only a short tutorial that doesn’t let you mess around endlessly. This makes it easy to miss things. I’ve never been fond of games locking a large portion of content behind multiplayer. If you can’t find anyone online, and no one you know is free to play the game with you, how are you supposed to access things like 2-v-2 and custom matches? Well, you just flat-out can’t. And that’s frustrating.

Living on the Edge

Strikers Edge has some good things going for it. It also has some less-than-good things going for it. But there’s one last thing that I have yet to answer outright. Is it fun overall? Yes. Yes, it is. It was easy for me to get sucked into playing match after match, I enjoyed improving as I played, and all of my victories felt legitimate and hard-earned (except for the one where the guy D/C’d after losing the first match). Although Strikers Edge may not be the most comprehensive game that I’ve ever played, it’s still a good multiplayer (and, in short bursts, single-player) game at its core.

Full disclosure: This review is based on a copy of Strikers Edge given to Hey Poor Player by the Publisher

Yep. That sure is a videogame.  After a long two weeks of traveling, moving into a new apartment, and starting a new job, I was looking forward to playing…