A Beautiful, Meditative Flight into a Surreal World 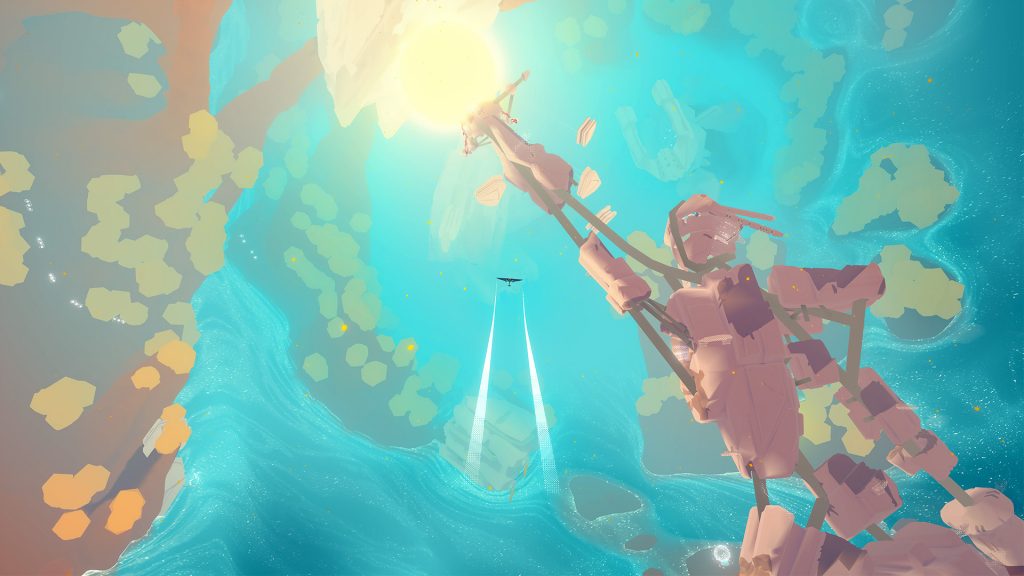 Following in the footsteps such modern classics as ABZÛ and Journey, developer PolyKnight Games’ InnerSpace is a surreal, minimalist adventure that entices players with its striking visual style and bizarre alien worlds that just beg to be explored. And while this isn’t the longest journey you’ll encounter this console generation, it’s a sublimely meditative experience while it lasts.

InnerSpace’s story is set against the backdrop of the Inverse, a collection of inverted planetoids in another dimension. After being brought to life by the submarine-like being known as Architect, players assume control of Cartographer, a sentient airframe tasked with recovering and cataloging ancient relics scattered around the Inverse to discover the fate of its previous inhabitants. These relics are found hidden among the various planetoids you’ll visit throughout the game’s story. You’ll have to be clever to find them, too. Each world is a completely wide-open environment with numerous tunnels, valleys, seas, and structures to navigate and dozens of puzzles to solve.

Conquer the Seas and Skies 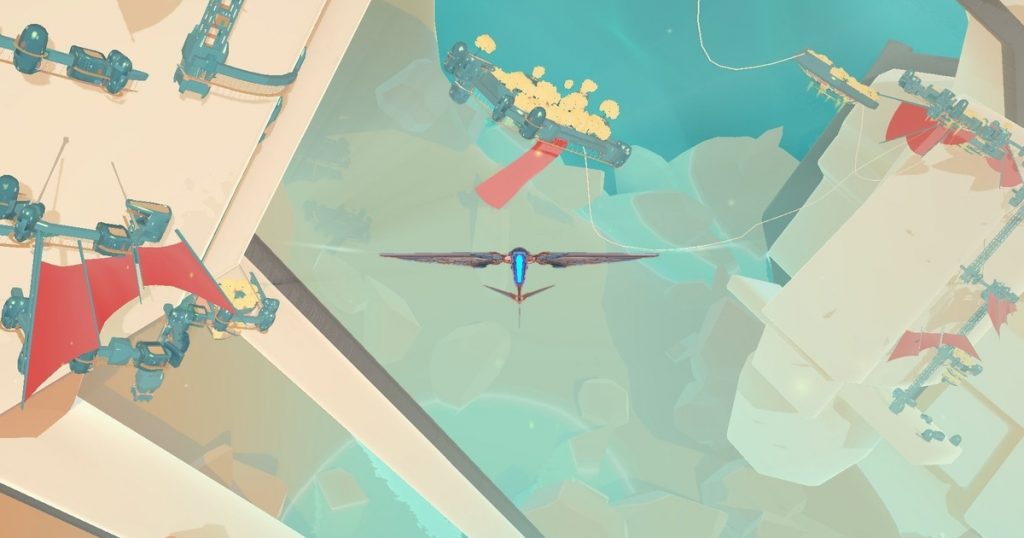 Thankfully, Cartographer is a rather capable airframe that can easily make his way around these fractured worlds. Upon completing the game’s brief tutorial, I felt like I was ready to own the skies. Effortlessly, I zipped, dove, barrel-rolled, and soared high above the strange alien landscape. Initially, you’re only able to fly. The left stick controls your pitch, while the right stick controls your yaw. All told, flying feels very similar to steering ships in Star Wars Battlefront II, albeit at a much more relaxed pace.

The big thing is you’re unable to stop while mid-flight. That is unless you land on a perch, which will then allow you to adjust yourself 360 degrees before taking back to the skies. This is essential for lining up flight paths inside structures or reaching tucked away areas that require precision to reach. Occasionally you’ll encounter rather labyrinthine structures where finding perches become a necessity to advance, as you’ll otherwise find yourself ricocheting off of the walls like a pinball, which is never very fun. Thankfully, it takes an awful lot of damage before your airframe bites the dust. So much so that survival never really concerned me, leaving me free to focus on the thrill of exploration.

While you’ll spend plenty of time above the clouds in InnerSpace, flying is only half of the experience. Before long, you’ll be able to plunge beneath the waves as a submarine, too. Being able to switch between these two forms on the fly feels amazing. You can dive from high above and crash into the clear blue waters, only to seamlessly begin combing the ocean floor for hidden treasures, or emerge from the murky depths only to dolphin dive out of the waters and dart off towards the artificial sun hovering in the center of the world. It’s a really cool sensation that I never managed to tire of. Without question, this freedom of movement is exhilarating and easily the most memorable part of InnerSpace’s experience. 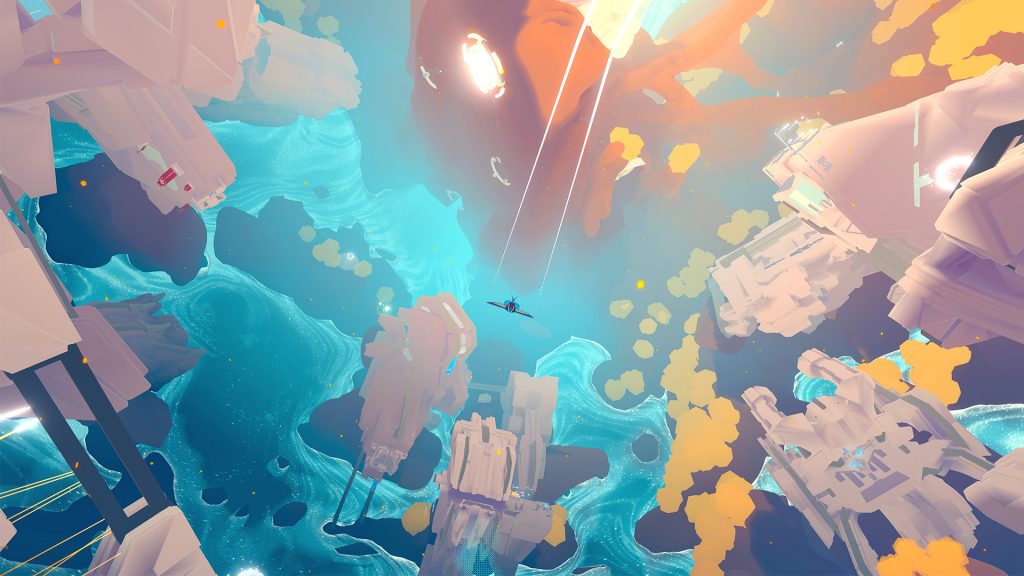 The areas you’ll explore in InnerSpace are massive, and you’ll have to comb nearly every inch of them to find all of the hidden relics in order to progress to the next area. Thankfully, you’ll often find trails of collectible bits of wind that guide you where you’ll need to go like shimmering, effervescent breadcrumbs. In addition to serving as a welcome guide, the wind you’ll collect is also used to power relics and unlock new airframes for your to pilot, as well as upgrade some of your skills. While following the wind is almost certainly a way to stay on the right track, it will only take you so far.  That said, you’ll also need to keep a keen eye out for switches, buttons, and other hidden mechanisms which unlock new areas teeming with relics and other collectibles.

Simply put, each world is a veritable puzzle box. And personally, I really enjoyed the game’s open-ended nature and the way it encourages the player to scour every inch of each planetoid. But having said that, I can admit that it’s certainly not for everyone. It’s not hard to imagine InnerSpace’s lack of hand-holding and labyrinthine areas turning off players who like a bit more direction in their games. Even after spending hours with the game, I even found myself uncovering many of the relics and toppling the various bosses I encountered by total chance.

Before you get too excited, these bosses aren’t fought in a traditional sense. They are more or less large puzzles that cap off each area. And while they can take awhile to overcome, they’re not particularly challenging. However, what they lack in terms of a fight they make up for in terms of presentation. The Phoenix encounter, in particular, was enough to give me goosebumps as I pursued it through an icy landscape to the tune of a haunting alien melody as hundreds of tiny birds swirled behind it like a glowing tempest of embers. It’s moments like this, where the game’s surreal aesthetics and deliciously minimalist musical score come together to create something irresistibly unique and beautiful.

InnerSpace is a Short But Sweet Journey Into The Unknown

InnerSpace shoots for the stars, but never quite leaves the stratosphere. Though it’s a short journey that can be completed in just a few hours, the lack of variety in its moment-to-moment gameplay can make it drag on despite its brevity, especially when you’re stuck hunting down one last relic you missed for the better part of an hour. These moments of frustration and tedium notwithstanding, developer Polyknight Games absolutely deserves credit for crafting an utterly hypnotic and meditative experience that belies its minimalist presentation. It may not be perfect, but those who enjoy the artful serenity of gems like ABZÛ and Journey may want to experience what it has to offer.

Full disclosure: This review is based on a review copy of InnerSpace given to HeyPoorPlayer by the publisher.