An Adventure Platformer With Heart

Back in the year 2008, while doing my typical internet browsing for things related to the video game scene, I stumbled across info on a game called Noitu Love 2: Devolution.  It was by a development studio named Konjak and not available on any particular platform. Instead, you had to download the .exe file off of their website and run it directly.  And while I can’t exactly recall why I opted to go through with downloading this title, I can say that I was and am still very glad that I did. Noitu Love 2 was touted as a platformer but it plays unlike any other platformer before or after it. The main character is controlled with directions for walking and the player uses a mouse to launch the character all across the screen and even into enemies. This resulted in some truly frenetic gameplay which, when coupled with excellent graphics and sound, made for a rather irresistible package!  Not until later did I realize that Konjak was actually one man named Joakim Sandberg, but also that he had another game on the horizon that he was working on. I anxiously anticipated this release! After many years and a plethora of other played video games, I eventually forgot all about this mythical production and proceeded to move onto other things. That is until Iconoclasts completely blindsided me with its return and actual release in January of 2018 for the PlayStation 4 and  PlayStation Vita.

Iconoclasts places players in a world where theological government regulates resource usage and disallows any form of mechanic repair efforts be made outside of government employees. If a citizen is caught committing such a sin, as well as others, then they and possibly their family will be crushed within their home by debris that has fallen from space. This act is known as the Penance. Players take on the role or Robin, a rogue mechanic that goes on the run to evade such Penance after being caught in the act of helping others and, as she does, she stumbles into her chance to become the hero that her planet needs.

An inspired romp through a two-dimensional land 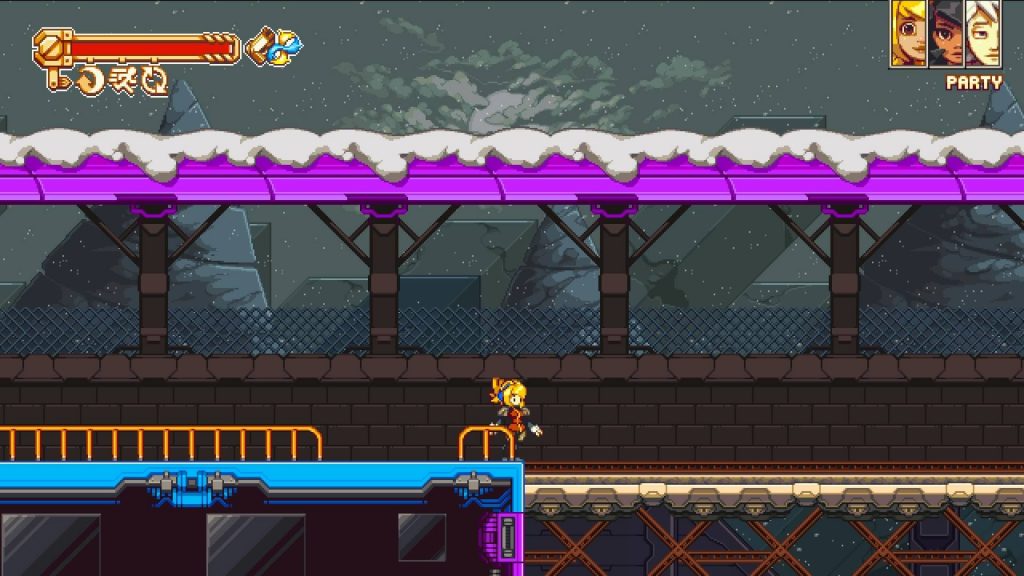 Joakim Sandberg, the creator behind Iconoclasts, stated that his inspirations for Iconoclasts were “Monster World IV and Metroid Fusion” and I feel as though those influences are very noticeable as the game is experienced. Exploration takes place across a variety of interconnected 2D environments ranging from colorful grasslands to wind-swept frosty peaks. Each of these areas is streamlined by design to provide the player with a sense of exploration while reducing the chances of them getting lost and maintaining a forward momentum. And littered through the areas are signs and clues to remind the player of the abilities available to them so that, in the event that they get stuck solving an area puzzle, it will likely be because they couldn’t solve it by skill and not due to forgetting how to utilize Robin’s move set. Lastly, the in-game map is always indicating, either by words or by icon, what the player’s next course of action should be and where they need to go next.

It’s a Secret to Everyone 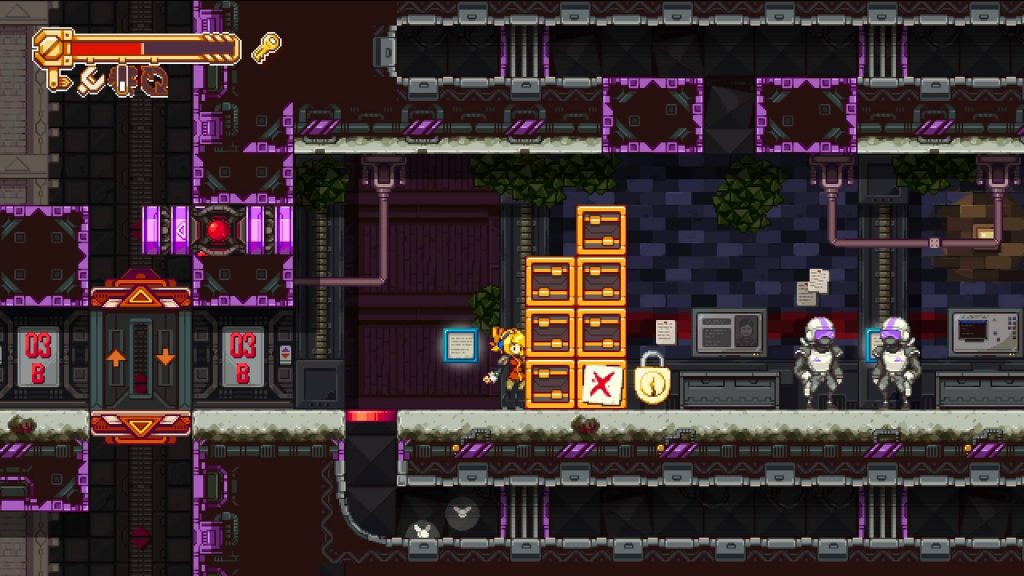 Those jerks better not solve this puzzle before I get a chance to!

That isn’t to say that there isn’t a bevy of secrets to discover in Iconoclasts. The game has those in spades as well. Hidden throughout the maps are treasure chests that can be opened to acquire materials and blueprints for use in the game’s simple but useful crafting system. And even though the design lends itself to encourage moving forward with the plot, there are a number of times where an item or secret will be unattainable until a future character upgrade is obtained thus requiring the player to make a return in order to claim the bounty.

By locating blueprints that house schematics for possible creations, Robin can use the materials found in the game’s treasure chests in order to create “tweaks” which can be equipped to one of three slots at any save station found in the game. Tweaks don’t necessarily provide her with new abilities but they work to enhance abilities that she already possesses such as bestowing increased walking speed or greater attack power. Whenever Robin takes a hit from either an enemy or an environment trap, starting from the right to the left, one of her tweak equipment slots gets broken and is no longer functional. However, as she defeats opponents and destroys objects in the environment, she’ll acquire materials which will eventually repair broken slots thus making its respective tweak usable again.

All Up in Arms 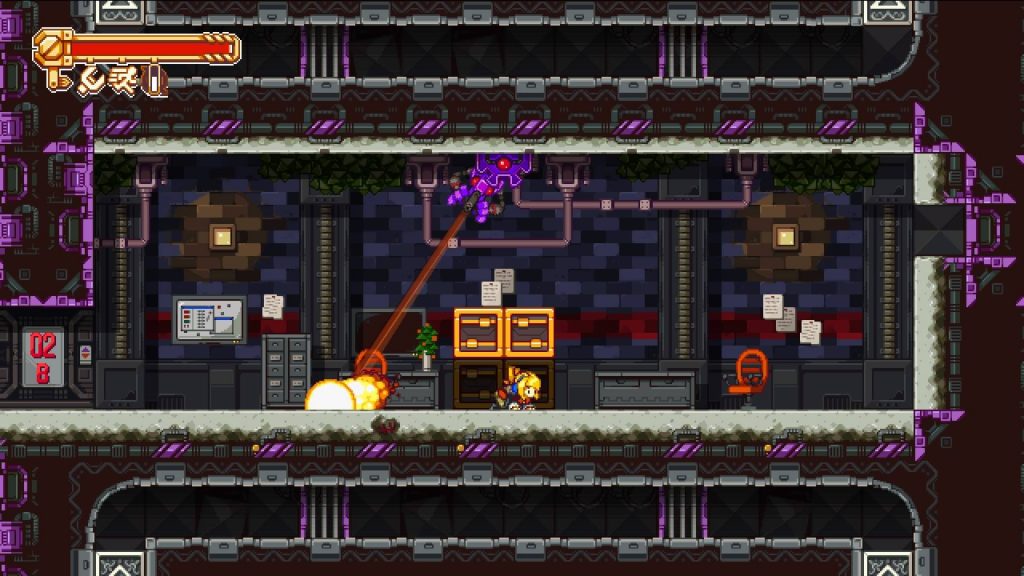 And sometimes, a more stealthy touch is required.

Weaponry in this game does well with utilizing the concept of quality over quantity. First and foremost is Robin’s trusty wrench, a weapon that is used for melee combat as well as well for twisting bolts in the game’s environments to solve puzzles and open doors.  Throughout the game, this will receive upgrades that unlock additional map traversal and puzzle solving abilities for Robin to use. Firearms are also necessary to progress in the game and are found as the story progresses. Each one has a rate of fire and a cool down rate which applies to both a standard shot and a charged shot. All of these weapons remain useful throughout the entire game even when new ones are discovered with both the standard and charged fire modes being used regularly in order to progress.

Exploring the maps, defeating fodder baddies, and uncovering secret loot is all fun and games but, in my opinion, the best feature of this game lies in the myriad of boss battles that it contains. Some of them are typical battles composed or running, dodging, and shooting until the opponent dies. But others are something that can be considered as puzzle boss battles. In some cases, a series of steps may need to be discovered and then taken in order to damage a particular boss. In other cases, computer-controlled characters will be acting on their own and Robin will need to coordinate with them to inflict damage. And, in my favorite case, the player will have to hot-swap between two characters on the screen in order for them to both participate in the battle simultaneously. Even though the game doesn’t always give away the solution to these puzzle bouts, they are choreographed well enough that it won’t take very long to figure out even if it may result in a death or two in the process.

A World Worth Fighting For 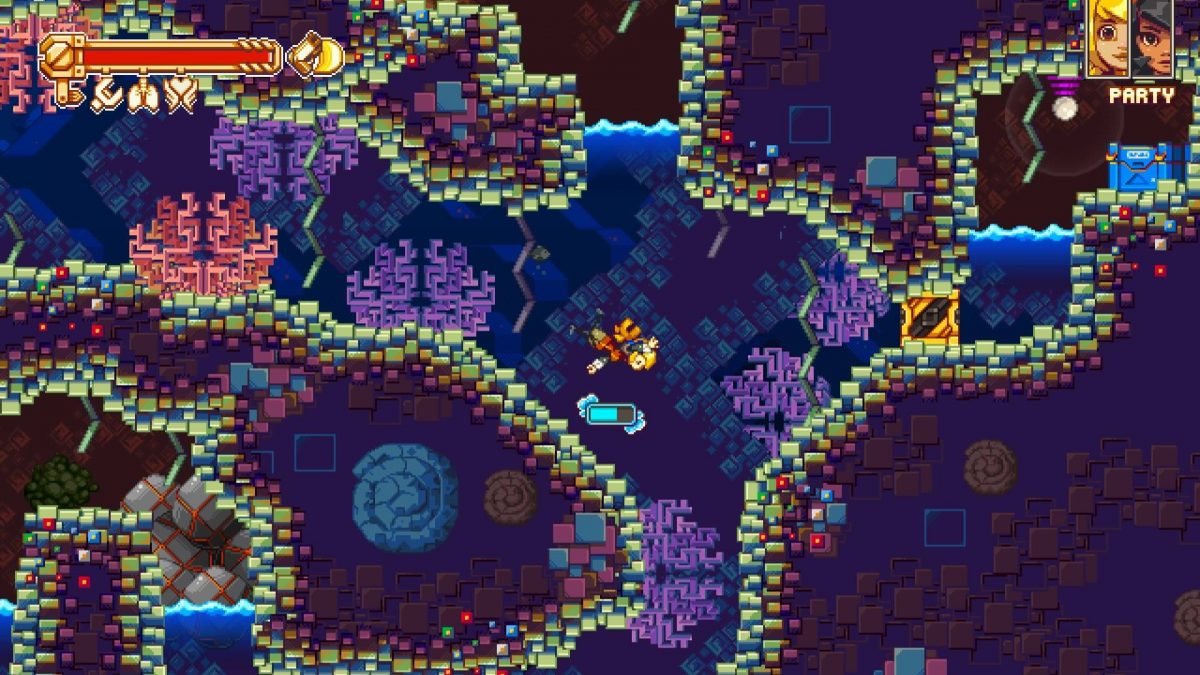 If this were all that the game had to offer then I would still feel that I was getting my money’s worth, but the characters and the world that the player experiences while filling Robin’s shoes is a pleasant one. Along the way, she will meet new faces, both friend, and foe, and all of these encounters will be accompanied by a fair amount of dialogue. Early on, conversations can be pretty simple and straightforward, but as the title progresses conversations become lengthier and more involved. Characters that initially seemed rather one-dimensional begin to display other layers that you wouldn’t have expected them to have. It feels almost as if Joakim Sandberg was working on this game over the past ten years and his writing style evolved along with the expectations of the characters as he made progress. That isn’t to say that players will encounter discussions as long as those found in some RPGs but they shouldn’t be surprised if they come away feeling a sense of attachment to a number of these colorful characters.

Graphically, Iconoclasts is a visual treat to those that are fans of pixel art ripped out of the 16-bit era of gaming.  Square wisps occasionally flutter across the screen as you progress each area.  Character animations are very fluid and filled with personality.  Each locale carries its own pleasant characteristics that allow them to feel busy without reaching the point of becoming too excessive.  And the audio crafted to accompany these things also does the job quite nicely. Initially, I felt annoyed by the *pip pip* sound of footsteps whenever Robin runs but I very quickly came to enjoy this.  Music ties well to each area and you can pretty much tell that Joakim was going for a very distinct but familiar sound with each zone.  No real experimentation with sound and music here but it still sounds great and does the trick quite nicely.

Tossing a Welcome Wrench Into the Machinery

This game released during a hefty week surrounded by the likes of Monster Hunter World and Dragonball Fighter Z and I was worried that it would be overshadowed by the other titles. I was also worried that I’d spend time playing a dud title while I could be slaying stone dinos in the desert. While I believe that the former may have come to pass, I do believe that my ten+ hours spent playing Iconoclasts were hours very well spent. From the graphics to the music, to the story, so the entirety of the game’s design was all done by one person and he did a spectacular job.  I would even go so far as to place this in “indie darling” status alongside Cave Story. It isn’t too late to embark on a journey to save a torn planet whilst making a few new friends along the way. Pick up your wrench, lock and load your stun gun and head off for one excellent adventure!

Full disclosure: This review is based on a PlayStation 4 copy of Iconoclasts provided by the game’s publisher.