The video game industry is ripe with clones of games of all genres. It’s simply the nature of the beast. Some of these clones are actually worth mentioning. Others, most in fact, are not. It is because of this that I approach Brawlout with caution, because one can admit upon seeing and playing it for the first time that this title has potential. It’s clearly a Smash Brothers clone, and is unapologetic in this notion too. However, it just so happens to be a very good Smash Bros. clone, at least in terms of copying a lot of the visual effects. In fact, at a brief glance I would expect that many people might not see the difference at all. Upon closer look however, the cracks in this veneer begin to show until things fall apart entirely.

The sad part is that if the developers of Brawlout had just taken things in a few different directions, instead of trying to be such a blatant Smash Bros. clone, this could have been a really definitive title for the indie fighting genre. The characters are just cute enough to be iconic (and even have a few notable appearances from Hyper Light Drifter and Guacamelee) and it has all the feel of a certain something with growing potential.

It Is Not The Thrill Of The Fight 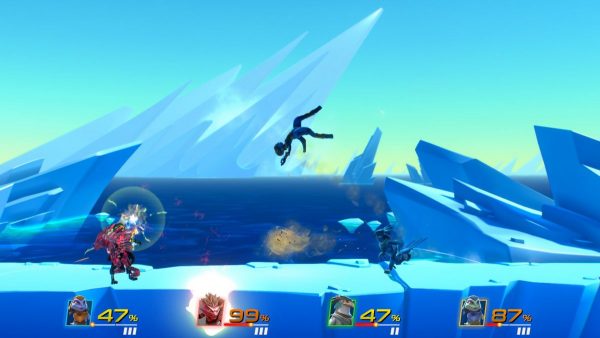 This is about the most excitement you can expect, and I’m playing against the CPU.

Now if I’m going to be completely honest, fighting games are not my preferred genre. I’m the classic button masher, never bothering to learn the combos, which as we know never really wins fights – save for those who are extremely lucky at least. The thing about Brawlout is that there are no combos to learn here, which you’d think would be a dream for a person like me, but hear me out. Each character seems to more or less have the same kit in terms of combat. There are one or two designated moves to each character, but the game doesn’t tell you what they are or even how they affect combat. You’re left guessing your moves and planning on the fly which is generally not how you want to approach your fighting games.

Because of this very watered down combat system, fights have the tendency to get boring quick. It doesn’t help that you currently have no real online community to play against yet either which means you’re either doing couch co-op or fighting the CPU. Furthermore, there’s currently only eight fighters to choose from. Others can be unlocked through the course of play, but with such a weak starting roster it makes you wonder if anything forthcoming in later updates will be worth it. The battle maps have a similar issue, featuring next to no environmental hurdles and absolutely no items to speak of that could enhance the fighting experience. 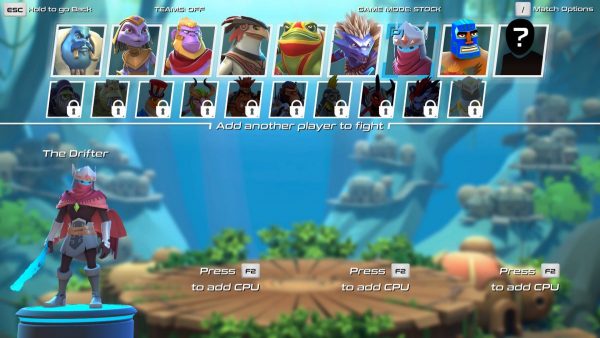 There’s more characters here than there are people to play against online.

Granted, the game is still in Early Access, so it feels disingenuous to hold so much against Brawlout straight out. As stated before, the game hits on a lot of the same notes as a Smash Bros. game in its initial presentation. It has a lot of the visual impressions and even the particle effects down pat, but it’s still missing much of the iconic charm required to even be able to hold a candle to the fan favorite series.

Of the eight characters to choose from, two come from completely different games, as stated before. The rest are generic anthropomorphic animals that feature no real defining range of attacks outside of the aforementioned abilities that are not elaborated on anywhere in the game. There’s no blocking mechanic to speak of currently, though there is a dodge ability that is rather tricky to time, especially when in the midst of a 4+ player battle.

Could Have Been A Contender! 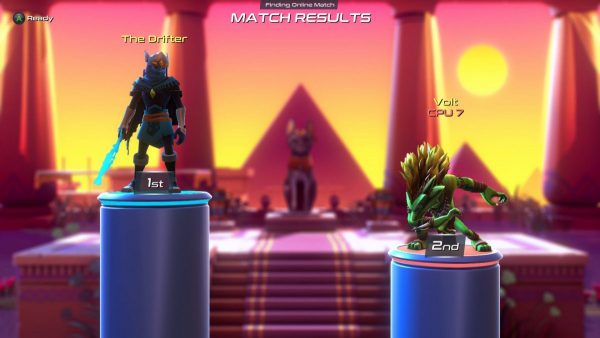 Ultimately, even being in Early Access, Brawlout didn’t offer enough to keep me interested for very long, if even at all. The developers are really doing a good job of making a Super Smash Bros. clone, but for all the work they’ve done getting that far, they’ve let the individuality that this game could have offered slide right off the offering plate and into oblivion. Here’s the thing. Fans of Super Smash Bros. are going to play Super Smash Bros. They aren’t going to be looking for a replacement waiting for the next installment of a game that they already love, they’re just going to keep playing it until the next iteration comes out. That’s kind of how a lot of Nintendo fans work in general.

I’m not throwing shade at Nintendo fans by saying that, mind you. This is just something that I’ve casually observed. If Angry Mob Games wants a contender in this field, they’re going to have to do something different to get noticed. Right now, Brawlout does next to nothing to do this, and I’m afraid that if they don’t step up their literal game, they won’t have the chance to show us at full release time.

Full disclosure: This review is based on a PC review copy of Brawlout given to HeyPoorPlayer by the publisher.

Samurai Shodown Heads To The Switch In Q1 2020, Pre-Orders Include Bonus Game