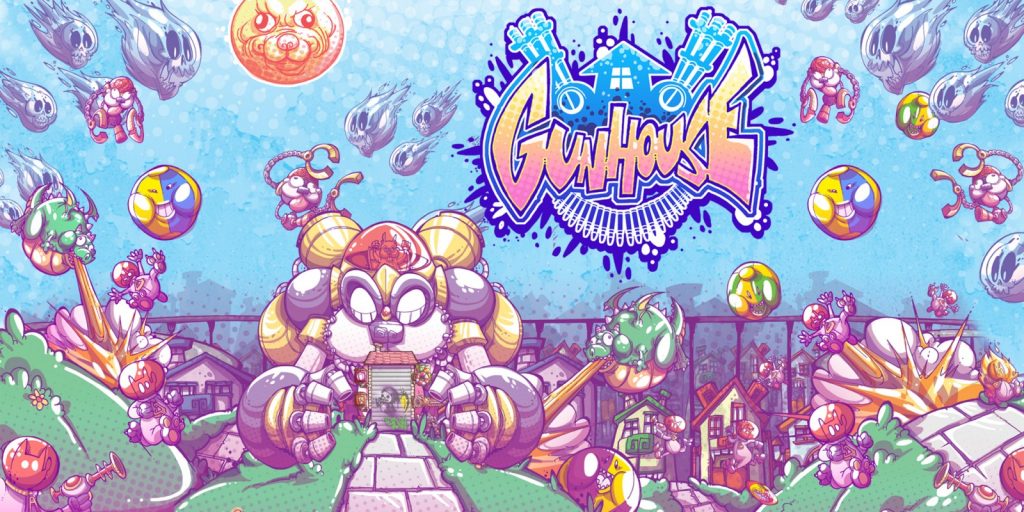 Have you ever taken interest in a game based solely on its promotional art? If you’re a gamer, I already know the answer; of course. After all, that’s why you call it “promotional”. Naturally, I’m a part of that as well. I love good promo art. I can’t exactly tell you what specifically entices me, but I do know that weird things often do the trick. And Gunhouse‘s promo art is… well, it’s weird. You’ve got a giant robotic dog being controlled by a smaller, also possibly robotic, dog attacking what looks like a tiny shack, explosions, beach balls, skulls… I could go on, but I won’t. I mean, you can literally just look at it yourself. It’s weird, right? Right! And it was that weirdness that drew me in.

It isn’t just Gunhouse‘s promo art that’s strange, though. The entire game’s pretty crazy. In fact, the premise almost sounds like something you’d come up with after waking up from a particularly strange dream. It doesn’t make much sense, and it doesn’t try to. And that, my friends, is the beauty of Gunhouse. 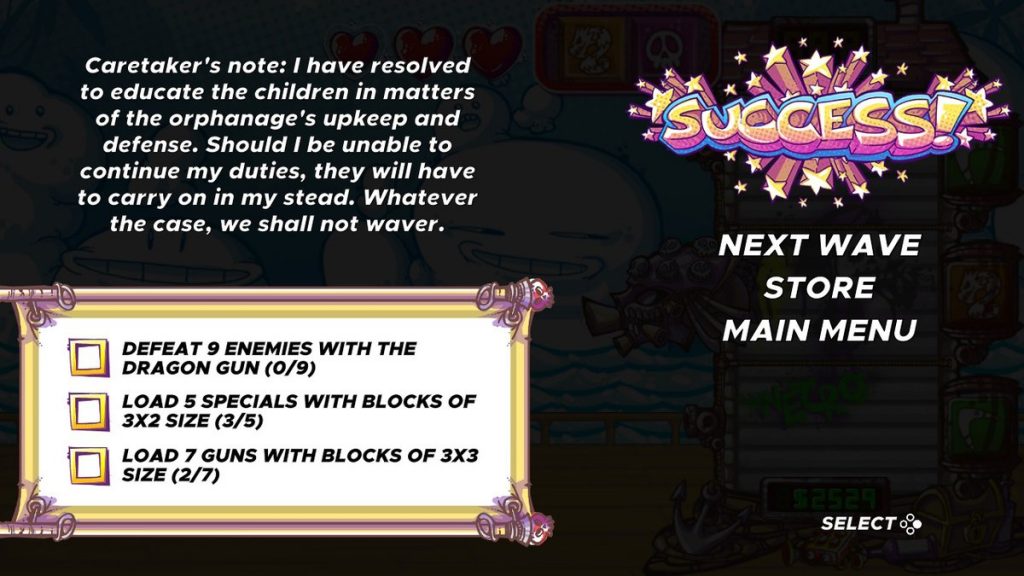 So, what’s Gunhouse‘s story? Well… essentially, it’s about the caretaker of an orphanage who one day finds their little house under attack by hordes of robots and monsters. What’s worse is that these baddies all have a singular goal in mind — to capture every last orphan living there. Unable to re-locate the orphans to a safer location, the caretaker decides that there is but one thing that they can do; turn their humble abode into a bullet-spewing, dragon-summoning, beach ball-throwing powerhouse, in hopes of successfully driving back every last attacker.

Other than that, Gunhouse‘s narrative is nebulous at best. Throughout the first 10 or so (in-game) days, you receive small updates on how the orphans are doing, and the caretaker’s thoughts on the matter, but nothing ever particularly gets resolved. Normally that would bother me, but I think that it fits pretty well in this case. Gunhouse was originally released back in 2014 on PlayStation Mobile, and has since undergone a few upgrades before landing on the Switch. Due to it literally being a few years old, and literally endless, a story with a proper ending wouldn’t fit in very well, anyway. 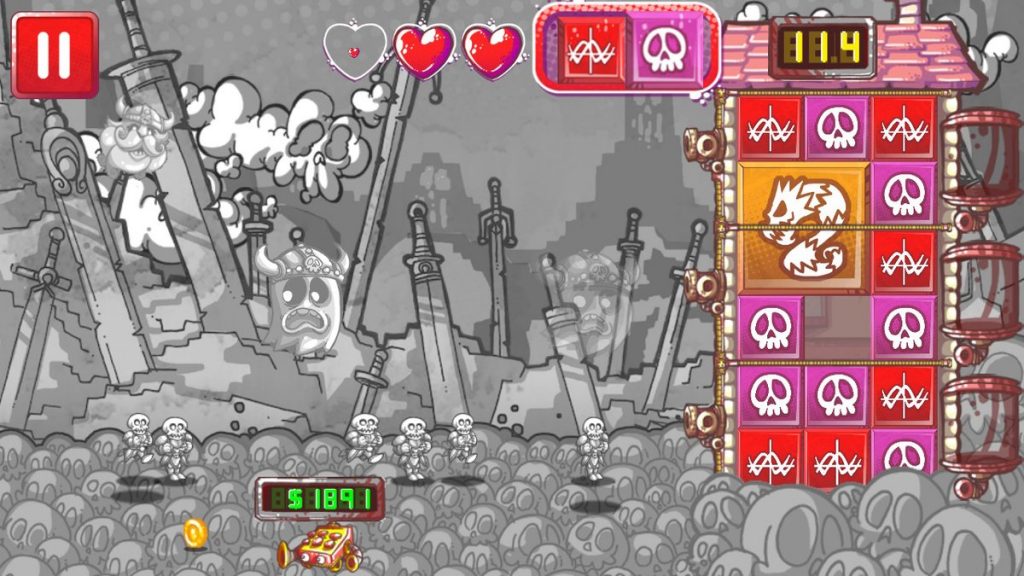 Beef up your orphanage while you have the chance!

Gunhouse takes a rather interesting two-step approach to gameplay. At the beginning of each wave, and after every 10 – 15 (ish) seconds of action, the shutters on your orphanage will open up. Instead of seeing orphans on the inside, however, you’ll be presented with a number of (mostly) 1×1 blocks. These blocks serve as your ammo, and are absolutely vital to your success, but they don’t come in a ready-to-use state. Instead, you need to turn these smaller blocks into bigger blocks by sliding them around. In terms of size, you’re good to go if you can create a 2×2 block, but bigger blocks do mean more damage. And, once your ammo is good to go, all you need to do is slide it to the very front or very back of your orphanage in order to load it!

Of course, there’s a little more to the game than simply making and loading ammo. Your orphanage has six “loadable” spots in the top, middle, and bottom of the building in both the front and back. Ammo loaded into any of the front spots turns into the gun of the ammo type loaded, and the height at which their loaded determines which row they’re aiming at. Ammo loaded into the back works differently. Instead of turning into a gun, back-loaded ammo turns into special attacks. These special attacks are all very unique from one another, and height placement doesn’t matter. Because of this, it’s always important to understand your ammo types, and how they work as both guns and specials. 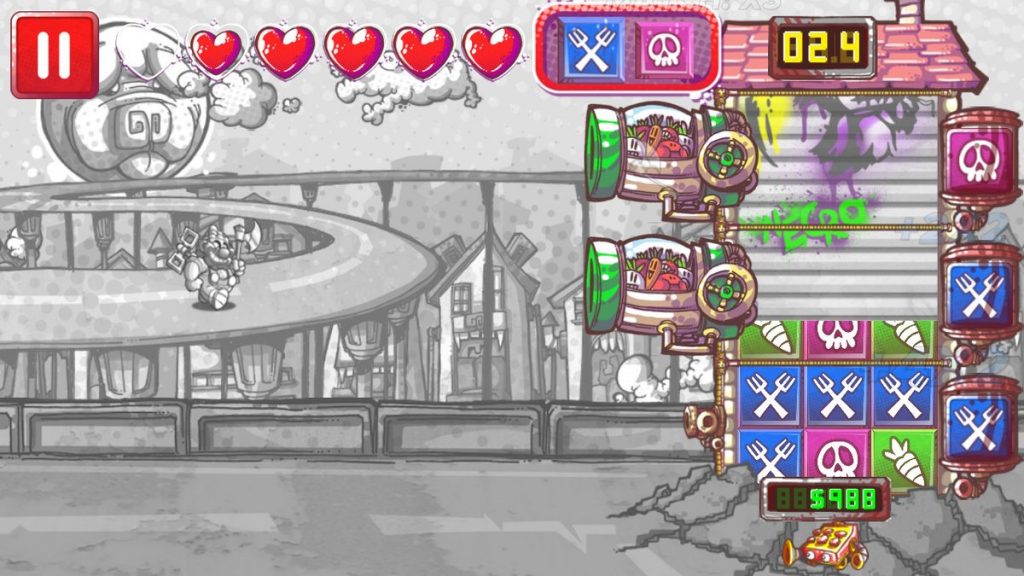 One of the nice things about Gunhouse is that you’re not necessarily stuck with the blocks given to you. Instead, you can get rid of whatever you’d like by simply sliding it off the screen. So long as it’s not a usable ammo block, it will simply disappear, and a new block will fall down from the top. Thanks to this, it’s easier to be a little pickier when deciding on what to use, be it because you’re looking for a specific type of ammo, or because you’re trying to chain combos together.

You can’t be too picky, though. Gunhouse may present its players with easy-to-grasp mechanics, but that ease comes at a price; a time limit. A small, 18-second time limit. At first, this isn’t a big deal. Gunhouse is nice enough to ease players into things, meaning that, so long as you load at least one or two spots, you’re good to go. But that hand-holding doesn’t last forever. Soon enough, you’ll find yourself needing to go into every wave guns blazing (literally), if you want to make it trhough alive. And that’s when you realize that 18 seconds isn’t nearly enough time. Especially when the shutters slowly close over the last 5 seconds, making it impossible to move blocks on the upper part of the orphanage around. It’s tough, but it’s doable with some practice. And after you finally get into the grove of it, it’s actually pretty fun. 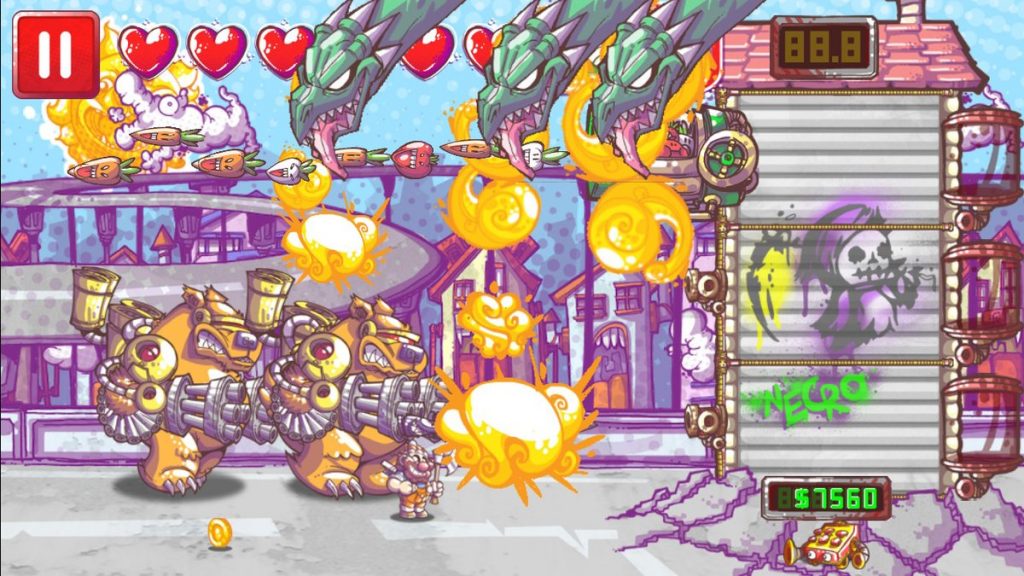 The veggies might actually be scarier than the dragons. I’m not joking.

After you’ve finished loading up your guns and the shutters have closed, you then enter the second phase of gameplay. In essence, it’s a pseudo-tower defense. And the reason that I use “pseudo” is because all you’re basically doing is clicking on all of your weapons to fire them. It’s more watching the fruits of your 18-second puzzle frenzy pay off, than anything else. …Or wallowing in despair if you managed to mess up big-time. There is a bit of timing involved with all of this. For example, you could wait to fire a gun until there are more enemies on screen. Or, depending on your ammo, placing a barrier at just the right time. But, other than that, it’s not particularly interactive.

To be fair, there is some semblence of strategy during this phase. Particularly where your ammo is concerned. While Gunhouse provides 10 different kinds of ammo, you’re only allowed to use 3 at a time. And, to top that off, you can’t use two different kinds of ammo with the same color. Because of this, you’ve got to be selective with your arsenal. Truth be told, I didn’t notice much of a difference for a while. Sure, each ammo is diverse, but they all kind of do the same thing. Which would be killing waves of enemies. So long as it shoots, it’s fine. Right? 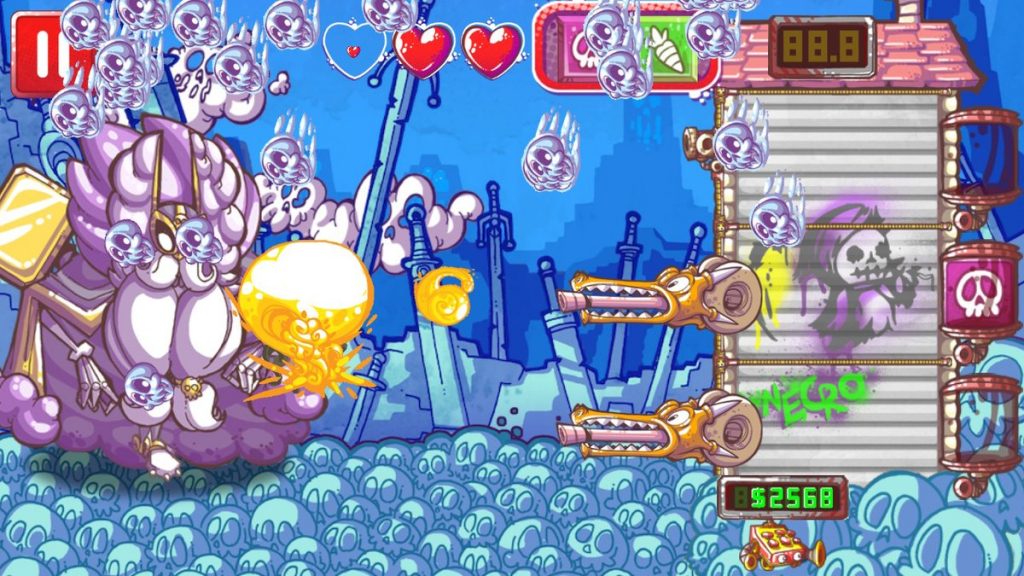 Fighting skulls with skulls… That’s how the expression goes, right?

Wrong, actually! As it turns out, it pays to be choosy with what you bring into battle. Specials aside, some guns are much better at hitting specific kinds of enemies than others. Due to your limited space, it can be tricky to load ammo into the topmost part of your orphanage. Sometimes, it’s even hard loading it into the middle. With the right gun, however, that might not matter. Several kinds of guns feature ammo that can cover a wider area, and some guns, like the Flame Gun can even aim at specific enemies! Taking into consideration the enemies that you’ll be up against, as well as deciding whether you’d rather have raw power or versatility, can make dealing with certain waves a lot easier.

And then, there are the specials themselves. Not surprisingly, these end up being a lot more diverse than the guns in terms of utility. Most guns provide offensive specials, such as the Skull Gun’s rain of exploding skulls or the Beach Ball Gun’s summoning of a giant, all-destroying beach ball, but others act more defensively. The Sine Wave Gun not only damages enemies, but stops them in their tracks temporarily. And the Fork Gun, while kind of terrible as an actual gun, has the ability to create a giant, mostly impenetrable barrier. Specials are absolutely ridiculous — and very, very fun to use. 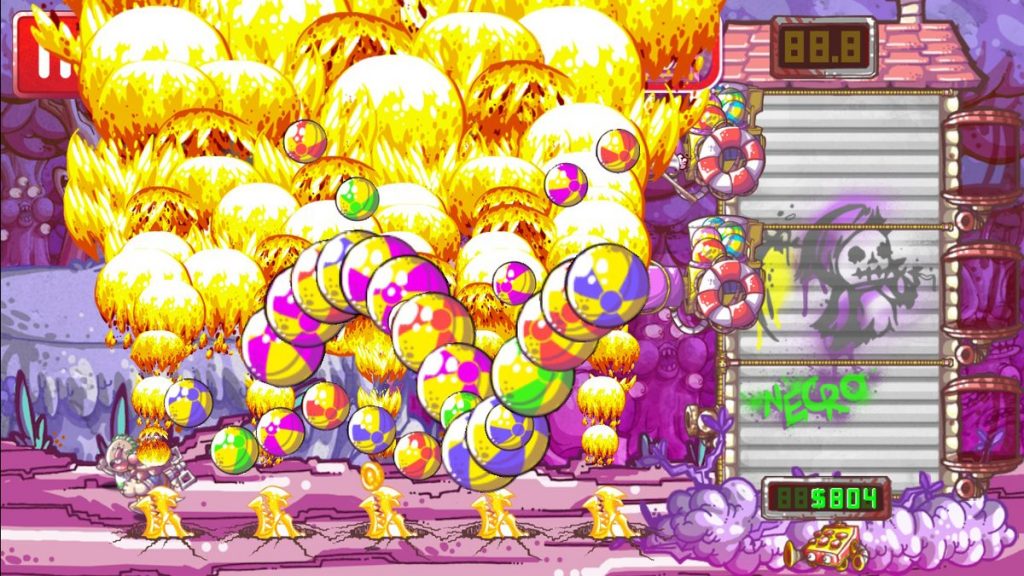 Sometimes you just want to watch your enemies burn. …And get hit by beach balls.

The only thing that I would really caution anyone about when it comes to Gunhouse, is the fact that it’s quite repetitive. You make ammo, you load ammo, you shoot bad guys, and that’s about it. The game does throw in things the the shop — which can be used to purchase offensive and defensive upgrades — and challenges — which are a great way to make money — but other than that it’s a lot of the same. This isn’t necessarily bad. Puzzle games are repetitive by nature. More than anything, I think it’s the fact that each level feels the same. Aside from you needing to get a little faster with your ammo-building, Gunhouse doesn’t ask much of the player beyond what initially lays out in terms of mechanical complexity. It’s still a fun game, don’t get me wrong, but a little bit of added variance might not have hurt anything.

Gunhouse is a very “pick up and play” kind of game. It’s easy to get the hang of, the levels are fast-paced, and it’s touting plenty of sights and sounds that are both wacky and wonderful. It may get a bit repetitive here and there but, based on my experience with it anyway, the fact that you can pretty much pick it up and put it down as you see fit stops it from getting entirely stale. It’s good for what it is — a relatively simple puzzle game with a few tower defense mechanics thrown in — and, in my opinion, that’s all it really needs to be.

Full disclosure: This review is based on a Nintendo Switch review copy of Gunhouse given to HeyPoorPlayer by the publisher.