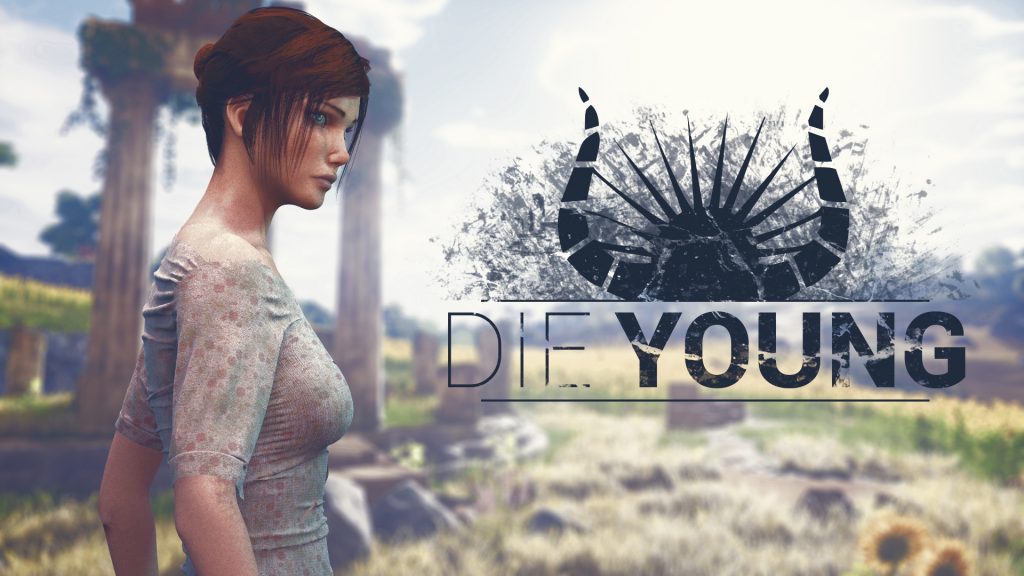 Developed and published by IndieGala, Die Young is a first-person survival adventure game currently in development for PC via Steam. Players take control of a nameless young woman who bears a penchant for thrill seeking escapades, a la Lara Croft. She gets kidnapped alongside her friends for reasons unknown and transported to a mysterious island where she is expected to wait and meet whatever mysterious fate her kidnappers had in mind for her. As this is a video game, however, the plucky young lass intends to do anything but this. Thanks to being offered an early access code to preview this title, I spent some time in her shoes in order to help her complete her goals. Her objective, from as far as I could tell, is to rescue her friends, figure out what the heck she is doing on this beautiful creepshow of an island, and make her grand escape.

Gameplay begins with the main character waking up trapped at the bottom of a dried well. She has no recollection of how she got there with her reflective thoughts being of the friend that convinced her and her friends to journey out to this place for the adventure of a lifetime. Suddenly, someone removes the hefty seal to the well and tosses a piece of paper down to her. This paper scrap, bearing a crude map of the island along with some circled landmarks and a compass, are the only tools afforded the player as they set to escape the well and begin their journey. Immediately from the offset, the gameplay places a heavy emphasis on parkour mechanics as the player is tasked with leaping upwards using outreached bricks as handgrip points. There is a bit of added excitement to these sorts of pursuits as well because the character loses stamina as the climb takes place thus placing urgency on the player to find each handgrip as they progress along their ascent. 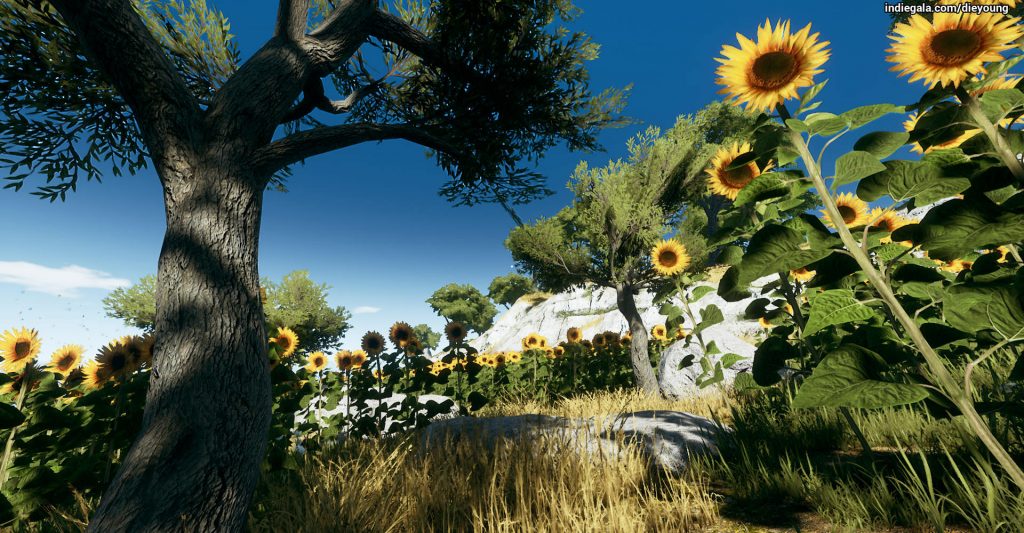 Reaching the top rewards the player with a lush and lavish landscape ripe with secrets to discover. And the player won’t be using a mini-map to do so, either. One of my favorite features in Die Young is the fact that it provides you with a flat map that you are made to navigate using a compass. Whenever you discover a new landmark during your exploration, the game will mark it on the map for you, so you have the means to navigate your way back to it. Save points that you craft will always be displayed on your map as well for the same reason. “Craft save points?” That is exactly what I said there! Campfires need to be created by the player using the game’s crafting system in order for the game to be saved. In addition to this, many other items ranging from tools, to weaponry, to healing supplies, can be crafted using a combination of any of the fifteen different materials scavenged throughout the island. The player can only carry a limited supply of both the materials and the crafted items, so hoarding is not an option in this game. Luckily, the process is very straightforward and easy to approach, with new craftables being discovered as the player progresses through the game.

Survival in a “survival adventure” isn’t just about the tools of the trade. It is also about managing the player’s status. In Die Young, this is done through the monitoring of three gauges: Stamina, Hydration, and Health. The stamina gauge is the easiest of the three to manage as it remains full unless the player needs to use a melee attack, climb, or sprint. Hydration is a gauge that runs out over the course of time, measuring the player’s need for water. Sources of water can be found throughout the island and it is up to the player to be mindful of where they are located in order to replenish their water reserves when the time comes. Health is pretty much how Die Young handles both your hunger and your ability to stand up to assaults from the island’s more “hostile” inhabitants. 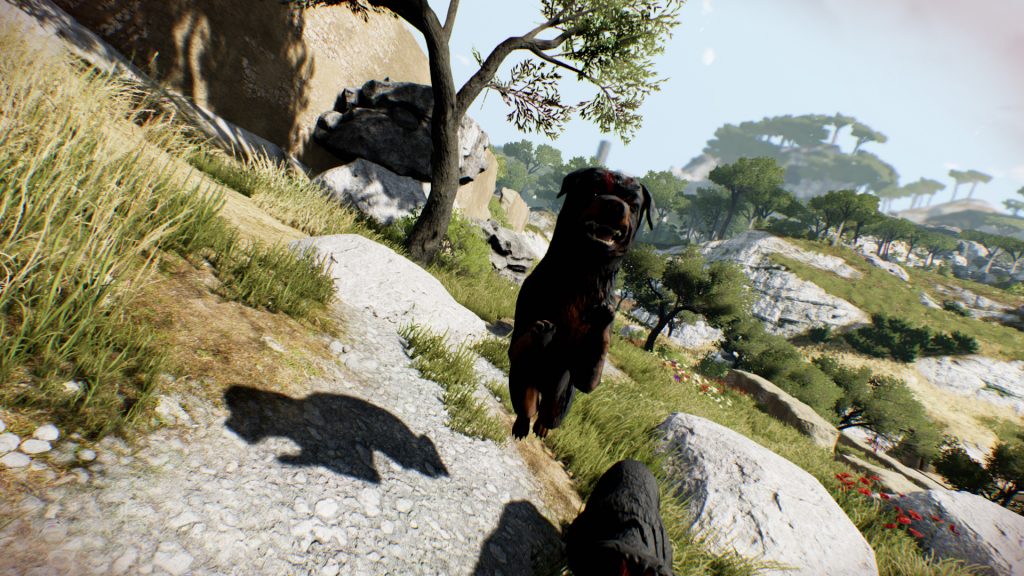 The most commonly encountered adversaries are natural wildlife. Rundown homes and dark caves will be populated with bats, rats, and snakes. They are mostly annoyances that can be swatted away with rocks or a twig. But outdoors, you run the risk of being assaulted by wild dogs, and these tend to be the most frightening and frustrating encounters in the game. Relentless pursuers that they are, wild dogs will give chase at the mere sight of the player. Their reward for catching you is a very visceral assault that will easily trigger a sense of panic and a severe need to mash whatever quick time button the game displays in order to break free of their four-legged mauler’s clutches. Last but not least, the player will also occasionally encounter leather clad human adversaries wielding scythes. While easier to evade, these enemies are a LOT more difficult to take down and should they manage to catch up to the player it is pretty much a guaranteed game over. Avoidance and evasion will likely be the main ways to handle these guys for a large portion of the game.

And all of this action takes place to some pretty music that comes in the form of surprisingly ambient soft rock that will creep in on occasion as you explore the island. Thus far, I’ve only noticed one track that plays during times devoid of stress but I never found myself tiring of it and, sometimes, I’d even catch myself humming along to it. Even with that said though, hopefully they inject a few more tracks into the game to play during exploration. The music does ramp up into a rather tense melody whenever a major threat looms such as a human opponent or a wild dog. It does a suitable job of getting your heart racing as you run, leap, and climb to seek out either an escape route or a decent place to hide from your pursuer. But one had better watch out for that stamina meter in the process, or else they will find themselves winded and reaching for that “load last save” option.

With the hours that I spent playing Die Young, I personally found it to be an enjoyable adventure with a lot of potential. I would have liked for there to be more materials to be collectable for crafting, and I hope for a larger variety of both human and wild adversaries. But the things that it gets right such as the parkour, map traversal, and atmosphere leave me very curious to see what the final product will present. And, most importantly, I honestly want to know just what the deal is with this island mystery! I believe that once you give Die Young a try you will feel the same way.

The Legend of Zelda: Breath of the Wild: The Champions’…