The Tabletop Terror of the Vikings

“It’s not what it looks like!” is an excuse countless people have made in their lifetimes before hastily minimising an obscene browser window, but in the case of Wartile, it’s actually true. Wartile looks like a plodding board game simulator where you’d take turns and roll virtual dice, but it’s actually far more action-packed than its cards and counters would suggest.

Wartile has you handling a collection of Viking figurines as you move them across the hexagonal boards of a magical fantasy world. Every aspect of the game promotes the signature board game aesthetic with the characters all being attached to a rounded base, making a little “plonk” sound as you click and drag them onto a new hex. Characters automatically attack the nearest adversary with special abilities being activated by dragging cards out of your “deck” and onto the board. Though characters are animated when they slash with their swords, spears and axes or cheer for victory, their feet are always firmly planted to their wooden base, reminding you that they’re figurines! What’s even more adorable is how when you’re selecting which characters you want to take on each mission, you take them out of the box and place them onto a little model longboat. 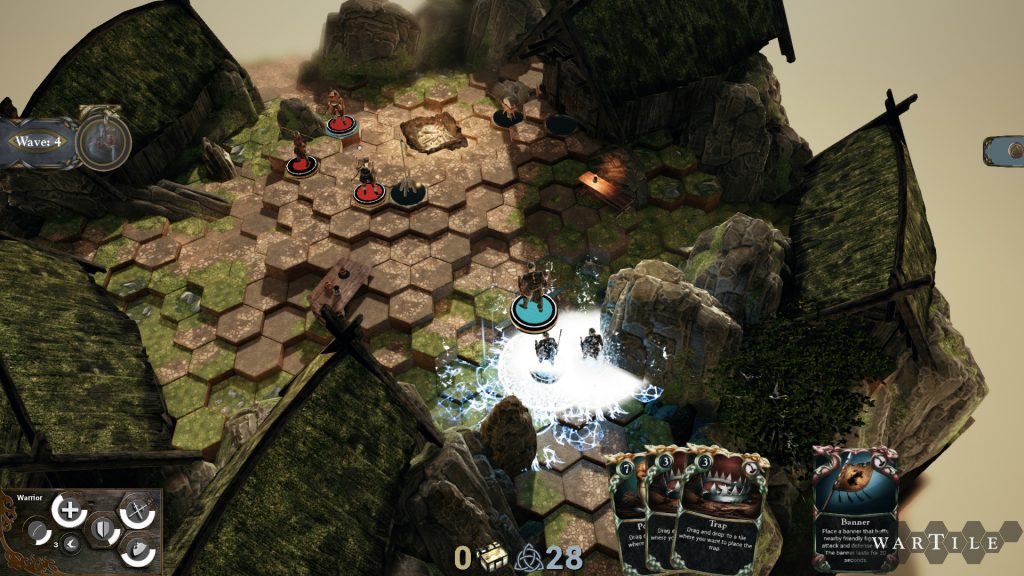 Sometimes you’ll be holding back wave after wave of aggressors like in this one enjoyable level.

What was quite surprising to me though, was how everything takes place in real time, with ability and movement cooldowns replacing the traditional turn taking you’d expect from a board game. This can create some situations which are tactical, yet frantic. I’d be setting up an ambush for some shambling zombies, creating a one hex wide choke point to funnel them into killzone with a well placed bear trap, letting my spearman and axeman hack away while their undead legs were trapped in metal jaws. However, then they’d start spawning from multiple angles, sweeping around the back, with any figurine flanked from the rear much more vulnerable to attack. This would leave me rapidly scanning my deck, quite literally, for a trump card to play. Luckily, each character has unique abilities which can synergize quite beautifully with eachother. The spearman can jab adversaries in the leg from afar, leaving them immobilized, allowing him to attack melee enemies with impunity from two hexes away with his spear, and also providing a perfect opportunity for the archer in the party to use her “volley” ability, raining down arrows on hapless targets from afar.

Wartile is a worthy test of your strategic thinking abilities. In addition to your unit’s ability cards, which are limited by cooldowns, you also have “Godly cards” which you can use by expending battle points (gained during battles by defeating enemies and achieving objectives). These cards are real game-changers, allowing you to heal your ailing toy soldiers, create area-of-effect poison clouds or spawn in crazed zombies to obscure and attack your foes. What makes these cards such a key part of the frantic strategic combat is how you’ll have to determine quickly whether it’s worth spending or saving your points on them during key moments.

The campaign screen is beautifully presented; the bar where you recruit new heroes has a little cardboard stand background providing a cute little diorama for recruitable figurines. Recruting new party members is expensive though, and you’ll have to prioritize whether you’d rather go down to the merchant to buy better armour and weaponry for your toy troopers. I have to say it’s quite enjoyable optimally equipping each figurine, like that satisfying snap of a little gun fitting into a Lego-man’s crescent hand as you add each new piece of gear. 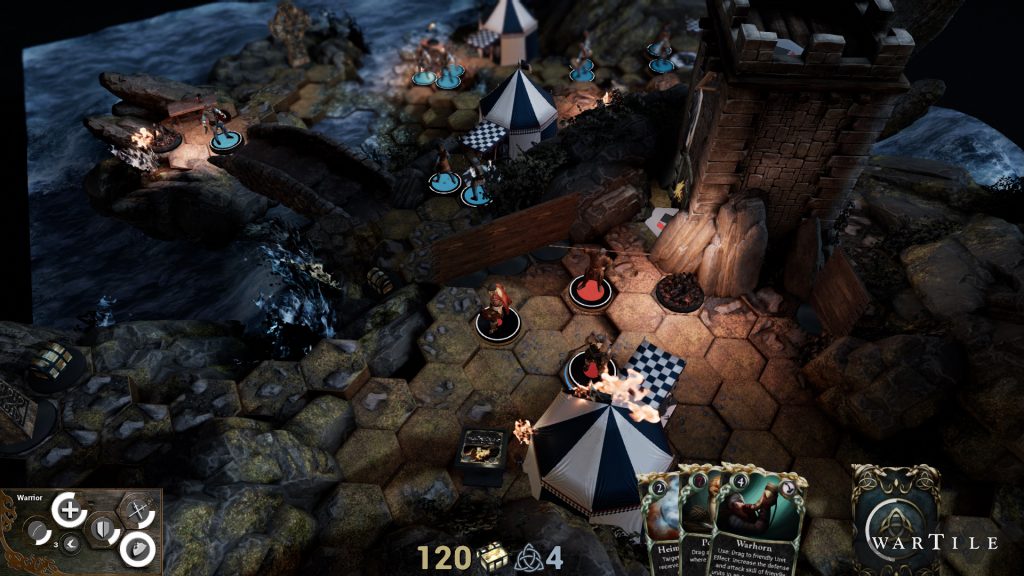 The map in the middle of your board game-like set presents a really diverse range of settings, from enchanted woods, to snowy mountaintops. There’s even a mission where you need to rescue a captured Viking king from the “Anglos” (because us Anglos just can’t help kidnapping indigenous peoples!)

The main fault I found with Wartile was how it’s often quite fiddly and time consuming to move your counters across long stretches of the board when there’s no action happening. There are other little niggles I had such as how you have to manually aim targets with the archer rather than her auto-attacking like her counterparts.

Occasional fiddly-ness aside however, I found Wartile to be an instantly charming and eminently playable Nordic-themed counter-placement-em-up. The game is close to finishing up its early access period and feels mostly like a fully formed title at this point, and surprisingly the only real bugs I could find was the basic grammar mistakes in the user interface text. Despite making me feel immersed in the life of a fearless Viking warrior, Wartile did sometimes make me shudder with every use of the pronoun “I” being shockingly un-capitalized! My wimpy “Anglo” preoccupation with punctuation aside though, I’m excited for the upcoming release of Wartile. Watch this space for a review of the finished version of Wartile, slated to land on Steam from a toy longboat and start pillaging your hexes sometime soon.

Riders Republic Review: A Diamond In The Rough Riders Republic makes an awful first impression. Dropping players into a tutorial that feels far too long, you’re forced to listen…