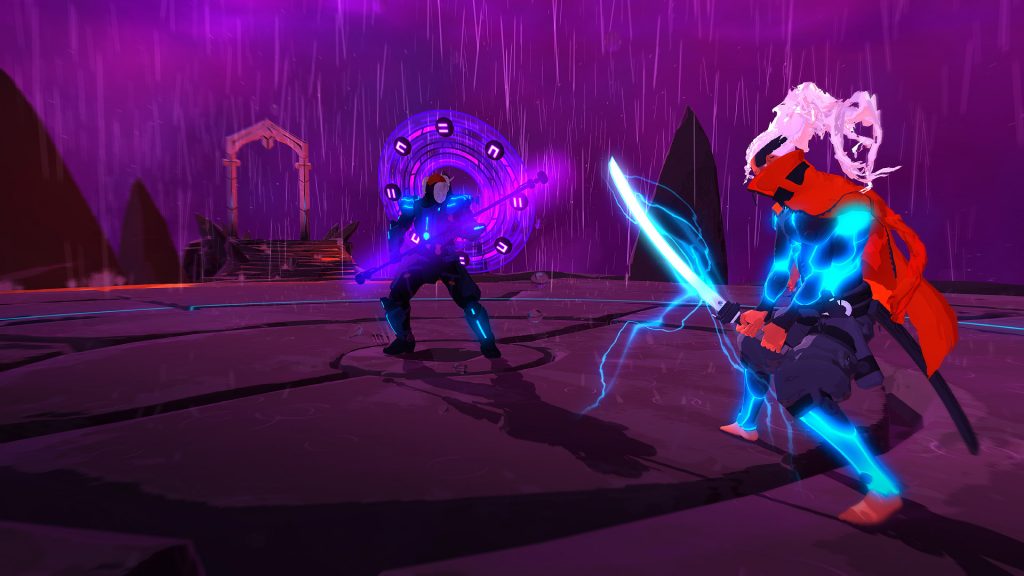 When it released on PS4, Xbox One, and PC last year, Furi quickly became one of my favorite games of this generation. Its neon-saturated aesthetic and pumping Synthwave soundtrack won me over right out the gate, and the tense, lightning-fast combat and punishing difficulty kept me coming back for more. So when it was announced that The Game Bakers’ sleeper hit was making the jump to the Nintendo Switch, you better believe I was all in for another wild ride through its bleak dystopian world.

In case you’ve never heard of Furi, the game puts you in control of a mysterious warrior who’s been imprisoned in a floating jail floating high above the earth. After being freed from your manacles by a mysterious man in a rabbit mask, you’ll embark on a boss rush through a series of powerful jailers who’ll stop at nothing to keep you rotting in your cell.

It’s a simple premise, but it works surprisingly well. The game’s single focus is thrilling one-on-one duels against deadly and imaginative foes who will test your reflexes and pattern recognition skills like few other games can. One part bullet hell shooter, one part sword fighting sim, it’s a wild ride that will keep your pulse pounding and your thumbs raw from beginning to end. 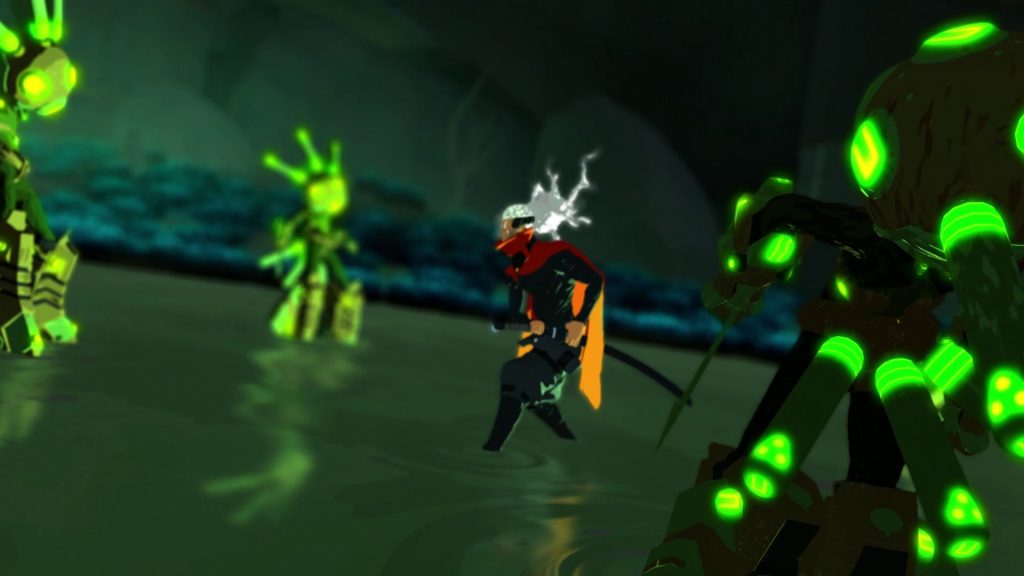 Each encounter in Furi comes with its own unique challenges to keep you on your toes.

Unlike most action games, Furi doesn’t put a massive arsenal of weapons at your disposal. In fact, you’ll start the game with the very same tools you’ll end with, and by the time the credits roll you’ll be an absolute master with them. You’ll have access to a gun which you can use to pelt your enemies from afar, which can be charged to launch a slow but powerful blast. Additionally, you have a katana that can unleash single, rapid slashes or more powerful charged attack which triggers a flashy combo strike. There’s also an evasive maneuver that can help you close the distance between your opponents or dash through concussive energy blasts and a parry which can block melee attacks, with each blocked attack restoring just a bit of your health bar.

The repertoire of attacks may not be too expansive, but it doesn’t really need to be. Each battle is laid out like an elaborate puzzle that gets more and more complicated as the fight carries on through its various phases. These duels will force you to master every skill at your disposal to come out on top. One moment you could be dodging waves of pulsing bullets like you would in a shmup developed by Cave, while the next you’ll be attempting to frantically dispatch clones of your enemy before you’re overwhelmed with toxic plasma. You can’t just button mash your way to victory, either. Usually, you’ll have to wait for your enemy to attack, dodge, and get a hit or two in at a time. There’s no room for error in these battles, so only patient players with ice water in their veins need apply.

Seriously, Furi is not a game for the faint of heart. It delivers the kind of challenge that kicks you in the stomach. It’s a brilliantly brutal title that hearkens back to the white-knuckle challenge of the arcade games of old. That said, be prepared to die time and time again.

Of course, there is an easy difficulty you can select if that’s not your idea of fun. But it makes the game so easy that you’ll fly through it in no time. Embrace the challenge – it’s worth it.

Not a Perfect Port, But a Damn Good One 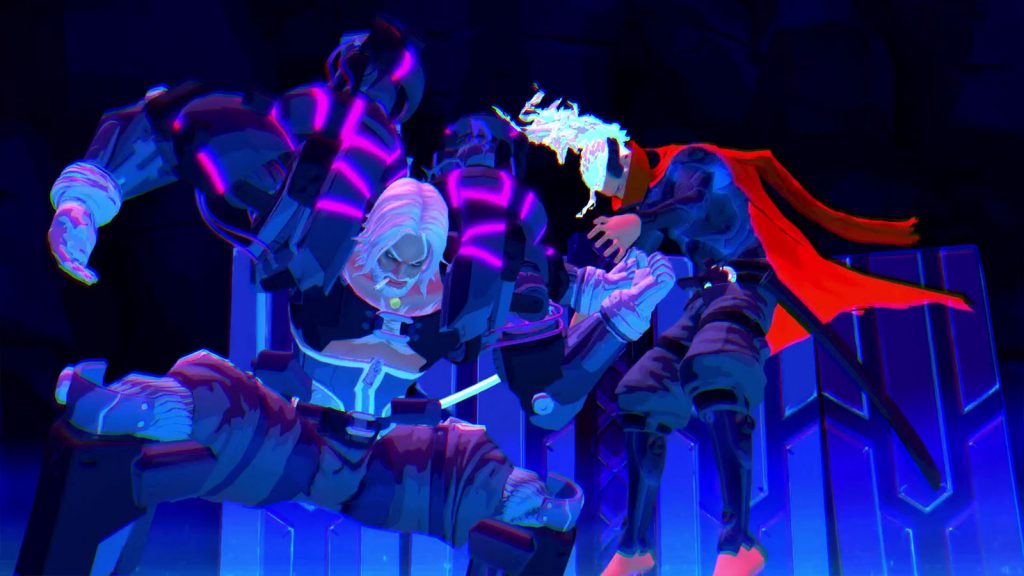 The Switch version of Furi includes the One More Fight DLC, allowing you to go head-to-head against the monolithic menace known as The Flame.

The Switch port of Furi doesn’t look quite as good as its previously-released cousins. Textures are a touch muddier than before. Also, there are some occasional dips in the framerate that can crop up when the action gets hot and heavy. This happens both with the system docked or in handheld mode. Thankfully these moments of slowdown are intermittent and don’t do too much to hurt the flow of the game too much in the grand scheme of things. Still, it’s a shame The Game Bakers weren’t able to deliver an experience as silky smooth as the PS4, Xbox One, and PC versions of the game.

The option to play Furi on the go via handheld mode is definitely a plus, and will likely lead to some insanely long bathroom breaks if you’re the type of player who plays your Switch atop the porcelain throne. It runs just as well as it does when docked, and the Joy-Cons, while not quite as nice as the Switch Pro Controller, certainly get the job done. I did find the small screen a bit hard to focus on though, especially in areas when the area is crowded with bullets and particle effects. That said, while the handheld mode is nice, I definitely found playing with the console docked to be the more comfortable option.

A few nagging issues aside, Furi is still a fine looking game thanks to its fantastic artistry which is bolstered by brilliant character designs courtesy of Afro Samurai artist Takashi Okazaki. Sure, Furi isn’t exactly an example of what the current gen hardware can do, but it’s a gorgeous game nonetheless with a style all its own – and some of the most surreal designs I’ve seen in recent years to boot. Furi also sports an incredible soundtrack by such Sythwave legends as Carpenter Brut, The Toxic Avenger, Waveshaper, and Scattle that fit the dark, 80’s-inspired aesthetic like a fingerless racing glove emerging from the sleeve of a bloodied letterman jacket.

No Regen From This

So, where does that leave us? The Switch port of Furi is good – damn good, even. Sure, it may not be quite as polished as the versions that came before it, but the ability to play in handheld mode, along with the inclusion of the game’s One More Fight DLC, make it easy to recommend – especially when you consider its $20 asking price.

Still, if you’re not a fan of games that pack a punch, you might find Furi a bitter pill to swallow. It’s a game that pulls no punches and demands nothing short of perfection from the player. If you’re a masochistic player looking for a punishing game with an unrivaled aesthetic, look no further than Furi to scratch that itch till it bleeds.

Full disclosure: This review is based on a Nintendo Switch review copy of Furi given to HeyPoorPlayer by the publisher.