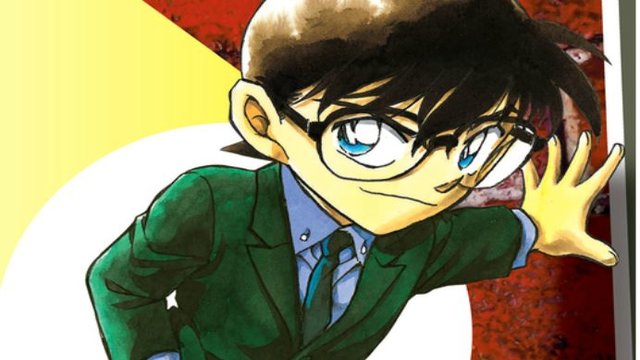 Notice: as this is a mystery series, we try not to divulge the twists and solutions involved in Conan’s cases, but we do dive into some surprises for context. Needless to say, skip this review until you’ve read the volume.

Conan Edogawa — the alias of teen detective Jimmy Kudo, who was shrunken to diminutive size — can never catch a break: volume 65 of Case Closed features four cases for him to solve, be it the Kaito Kid’s latest larceny, getting caught up in a bank robbery alongside FBI agent Jodie Starling, a life-or-death escape from two gun-wielding suspects, and, of course, a good ol’ fashioned murder mystery. Bookending with a case continuing from volume 64 and just before they crack the aforementioned murder mystery, Case Closed volume 65 is a smorgasbord of gripping mysteries for long-time fans.

When you’ve read Case Closed for over thirteen years like I have, you begin to recognize the tropes and inner workings behind creator Gosho Aoyama’s cases. Perhaps the most familiar is Anita and Dr. Agasa’s escape from two hooded goons, whom they overhear wanting to pay Conan a visit so they can “make ’em half dead.” A two-chapter affair, these ticking-clock cases are always some of Aoyama’s most thrilling, wherein the culprits haven’t committed murder just yet but time’s running out for Conan and the gang to stop them. Often, these are framed as “which one of these culprits is the criminal?” or “where is the culprit going to strike next?”, but as we witness in this volume, Aoyama occasionally likes to throw a monkey wrench into things and imply maybe these thugs aren’t what they appear to be.

Of course, these being Japanese mysteries and all, it’s inevitable Japanese wordplay can trip up English-speaking readers; as it happens, Nagoya slang ends up serving as this case’s clues,  something the average Western reader probably can’t discern. Regardless, this is hardly the worst offender 65 volumes in– there’ve been one or two cases where we’ve had to suspend all disbelief and pretend characters speaking in English are actually speaking Japanese — and as always, Aoyama tosses in enough story-telling clues and foreshadowing to suggest something’s up. It helps the actual chase is exciting too, what with bathroom shenanigans and Conan racing to scene on his solar-powered skateboard.

Similar traps are avoided in the ensuing murder mystery, which involves the suspects’ names relating to colors (“Shiro” standing for “white,” for example). Thankfully, these clues are presented from the get-go and allow the case to evolve naturally with an unexpected influence: Romance of the Three Kingdoms. The famous 14th century Chinese novel becomes a key component of the case, with a Romance-quoting detective strolling onto the scene (who is nicknamed after a chancellor from the novel), characters reenacting scenes from the story, and The Empty Fort Strategy utilized as a strategy to catch the culprit. 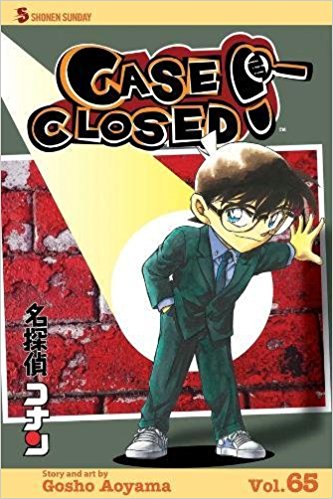 With the case continuing into the next volume, we have to ask ourselves: will the case be solved via Japanese terms and obscure references to a Chinese novel? Perhaps, but I had too much fun with this mystery to care about that. Much of it surrounds the rivalry between two new detectives: Kansuke Yamato and Takaaki “Kong Ming” Morofushi, the latter already emerging as one of my favorite detectives as he coolly doles out Romance and Confucius quotes before taking action. With the surprise fourth suspect and the incoming execution of the Empty Fort, the Red Wall’s conclusion remains an enticing carrot for volume 66.

The other cases are engaging, too: the Kaito Kid, who originally starred in Aoyama’s Magic Kaito, returns to once again loot from Serena’s grandfather, and we’re left to deduce who among three of Jirokichi’s staff — or perhaps even Jirokichi Sebastian himself — is the Kid in disguise. Like with the two-chapter chase, we grow to recognize something’s “off” about this heist, be it Kaito’s strange letters or Jirokichi’s unusual behavior, and thankfully the clues are easily localized for a Western audience. While I didn’t figure it out — I’m the kind of reader who prefers to let the cases take their course so they can surprise me — the unusually heartfelt ending was certainly a welcome change to the Kid’s escapades.

Meanwhile, Jodie Starling still can’t get over the loss of her colleague (or perhaps more?) Shuuchi Akai, whose surprise appearance at a bank robbery leaves her shaken. Much of the case surrounds her teaming up with Conan and the Junior Detective League to save the hostages from the robbers, but that Akai’s obviously hiding something never escapes our attention. Not that we ever doubted he survived that exploding car, of course, but as it becomes evident this’ll be yet another mystery stretched out over another dozen volumes, we’re already left wanting more. Some say Case Closed constantly suspending its main plot threads is the most frustrating thing about it, but I enjoy the lulls provided by the deluge of unrelated cases; this way, they come as a surprise whenever the likes of Akai, Kir or the dastardly Men in Black show up.

Even if VIZ’s localization can’t avoid inevitable lapses in wordplay, this is still the best it’s ever been: long gone are obvious typos in the form of misspellings or leftover names from the original Japanese translation, and the Westernized names are what they are. If this quality is the price for waiting three-to-four months between every volume, I’ll gladly take it — even if we are nine years behind the Japanese release. Volumes containing four back-to-back cases are always the most delightful for Case Closed, and really, I can’t ask for anything more.