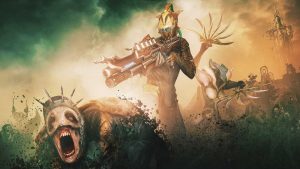 With Warframe originally releasing way back in March of 2013 it would be easy to think that the developers would slow down or give up on producing more content for the game but alas! Just two months after their most determined and largest scale expansion ever for Warframe, independent publisher and developer Digital Extremes has sought its eyes to expand the universe ever more with its Ghoul Purge Bounties.

“The grounds of the Plains have erupted with vile beings of Grineer origin – repugnant Ghouls that overrun their victims in a gruesome mass of limbs, toxin and violence. Players will encounter them via a Ghoul Alert, or by stumbling across their graveyards (where they are “born” from the ground), through Incursions or Bounties.”

To fend of these Ghouls though within the Plains of Eidolon, Tenno can arm up with a variety of trustworthy weapons such as a doubled barreled shotgun, a steel-bladed fan weapon, a four-barreled Quartakk rifle and even an automatic uzi nicknamed the “Stubba”.

Finally with this update, those looking for something to show off while taking a break from all of the Ghoul killing can get all cozy in their Landing Craft with the all new Personal Quarters decorating their ship with posable Warframe figures, companion toys and beds, wallpaper, a fish tank and more to create a mini diorama of one’s own making with players now being able to invite a friend inside to visit!

If you haven’t tried Warframe or have tried awhile back and didn’t particularly like it, there isn’t a better time to join into the game then now with tons of changes constantly and new content updated regularly.