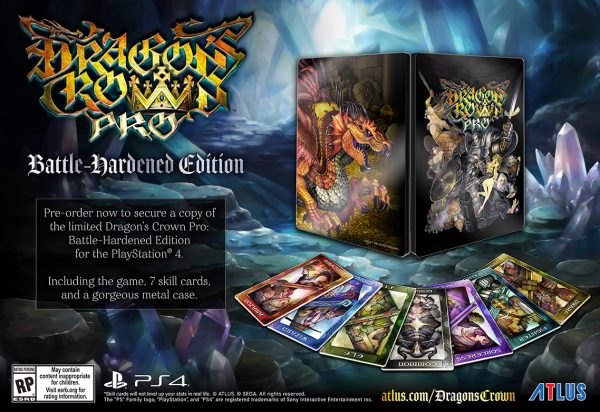 Great news for fans of the Dragon’s Crown series as ATLUS has just announced that their highly anticipated remaster is finally available for pre-order!

With the Battle-Hardened Edition of the game, you receive seven collectible skill cards featuring all of the game’s noble classes in a limited edition case.

As of the time of this article, no specific pre-order bonuses are listed but that shouldn’t stop you from picking up this classic 2-D hack and slash couch co-op, beat ’em up action game from Vanillaware and ATLUS with a planned release date on the PlayStation 4 and PlayStation 4 Pro exclusively January 25th, 2018.

Dragon’s Crown Pro features the same fantastic gameplay elements that the original game has to offer but with some well-deserved updates. Some of these new remastered features include: