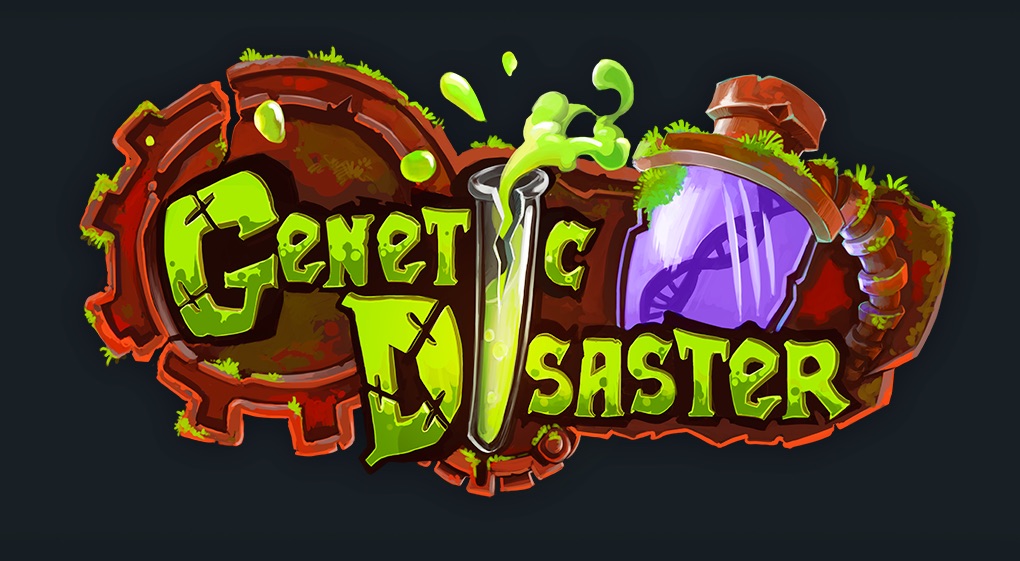 Ahh, Twin-Sticks… How I’ve missed you! While other publishers are pumping out FPS after FPS, Team8 Studio brings a cartoon dungeon-crawler to life with rogue-like elements that separate it from its competition in a surprising way. Play alone or team up with three of your closest buddies to fight onslaught after onslaught of enemies in crazy, procedurally generated levels and hopefully upgrade your character along the way.

To say it’s refreshing is understating what this game brings to the table. While very comparable to games like “The Binding of Isaac”, Genetic Disaster encourages a more relaxed playstyle, rather than making you worry about your stats too much. That’s not to discount this game whatsoever though. While somewhat simplistic when compared to other games in the same genre, this frantic, borderline bullet-hell roguelike is a joyride from the moment you fire up a game to the second you sadly crumble under the mighty wrath of projectiles coming your way. 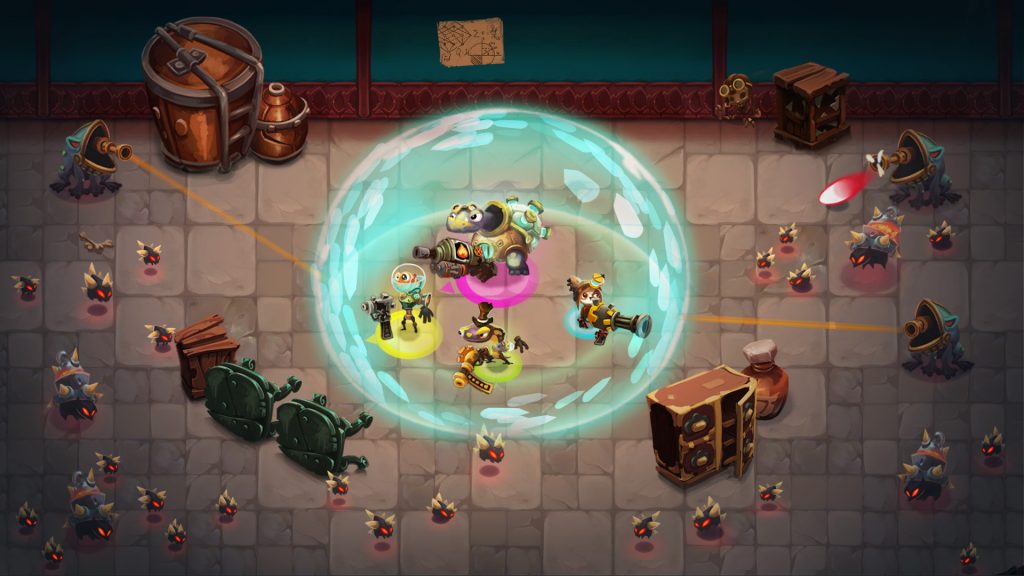 You start off the game as 1 of 4 main characters, each with their own set of kits with special abilities and weapons specific to their playstyle:

-Panic: The run and gunner with spring and a stun
-Bunker: The heavy tank with a large shield and reduced weapon recoil
-Sneaky: The stealth spy with a teleport and firing an extra super bullet upon reload
-Devil: The charge up with angriness built up with each kill releasing it for a devastating blow

I originally chose Panic but found myself playing as everyone. And I especially fell in love with Devil. His ability and special fit my playstyle perfectly thanks to his close-range shotgun ability and passive buildup of increased movement speed and damage that allow him to destroy everything in his way. Overall, I found that each character had its specific role in the group and choosing the “best” one is solely up to the preference of the player, as all characters are able to use all 65 weapons throughout the game, with obvious pros and cons for each weapon in the game’s arsenal. For example, while the mini-uzi might be a great close-quarters, run-and-gun choice, the accuracy and recoil might be considerably bad compared to rifles, which sport a longer range, yet slower rate of fire to assassinate enemies from afar.

Upon death, enemies might drop silver, which is worth 1 coin, or gold, which is worth 5 coins. Additionally, they drop bullets for standard guns, slime, for, as you might’ve guessed, “slime guns”, health or even a bomb to surprise you. Silver and gold can be used to upgrade abilities such as passive movement speed or even 30% more damage at the cost of 1 of your 3 starting hearts. This leads to the player making game-changing decisions that could mean life or death depending on the situation.

Beauty is in the Eye of the Beholder 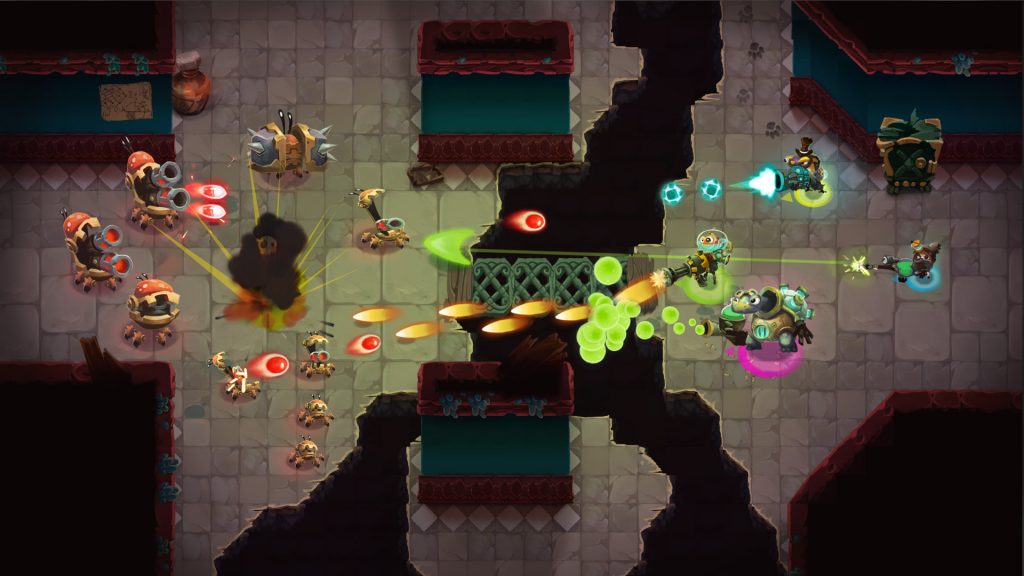 Wow, is this game beautiful! The first thing that I noticed was the creative and colorful background that Team8 Studio graciously hand-painted to glue your eyes to the screen. Not only are the visuals something to keep you attracted, but the game’s soundtrack accompanies the art extremely well. What sounds like a tuba, along with a selection of other brass instruments, compliment the game’s spooky mansion vibe that the developers were going for and help keep the action feeling fresh. 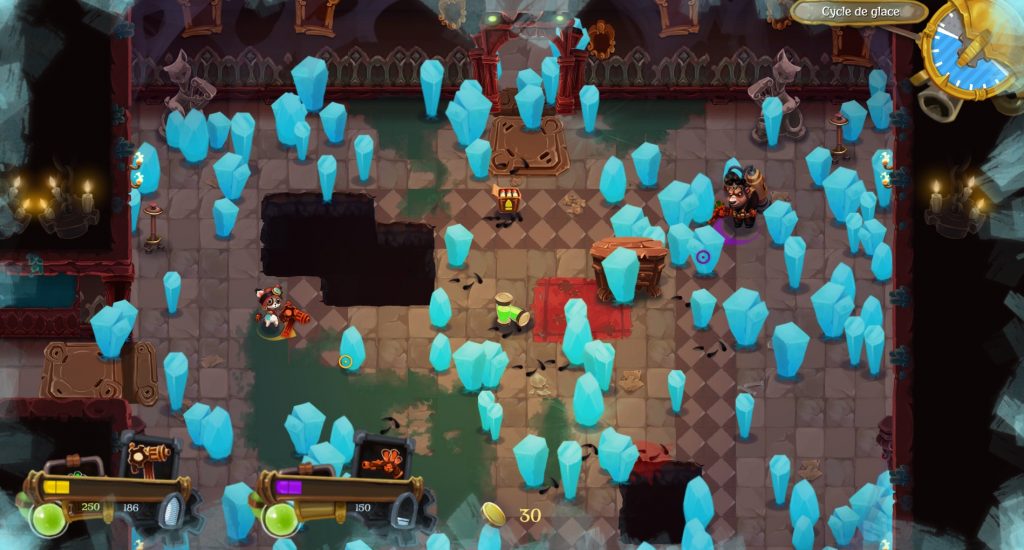 While my experience so far has been extremely positive, no game is perfect. And Genetic Disaster is no exception. For example, some features simply don’t work properly, such as the options menu which is visible but strangely cannot be clicked on. Thanks to this, I was treated to a soundtrack which, while beautiful, managed to be quite overwhelming at times. This led to me having to manually go into my mixer to select an appropriate volume.

Another quirk that bothered me was having to select from a pair of randomly-generated weapons at the start of the game, as people with a preference to specific weapons might have to restart the game two or three times to get a gun that they find viable for themselves.

Finally, when going into doorways to levels, you trigger enemies to attack you but some levels lead you to be overrun by enemies causing you to fight and die or retreat into the last room you cleared. This would be completely fine if when going into the last room for cover, you could see the enemies in the room you just left but instead the enemies attack you from off-screen creating some unfortunate and probably avoidable deaths.

Cycles and Cycles, oh my!

Don’t let these minor flaws blind you from the entire game, though. Team8 Studio has created a fun and exciting experience with some really interesting elements that pin this package together. Though I might have a slight bias, as they checked off two of my favorite categories of games in crafting a cooperative roguelike, I rest my case. The main point I’m trying to get at is if you enjoy games with a sense of chance and are looking for a great party night game with friends, check this one out. With support for up to four players at a time, I’m sure it will be a hit during a game night in short bursts with both LAN and online co-op.

With Genetic Disaster evolving into 1.0 as this review gets published, any fan of the genre would be kicking themselves to not at least try this quirky, cute, and overall great title from Team8. Over the past 18 months, the team has been hard at work pushing this game out the door, and at $20 with more free content promised, the game can only go up from here.