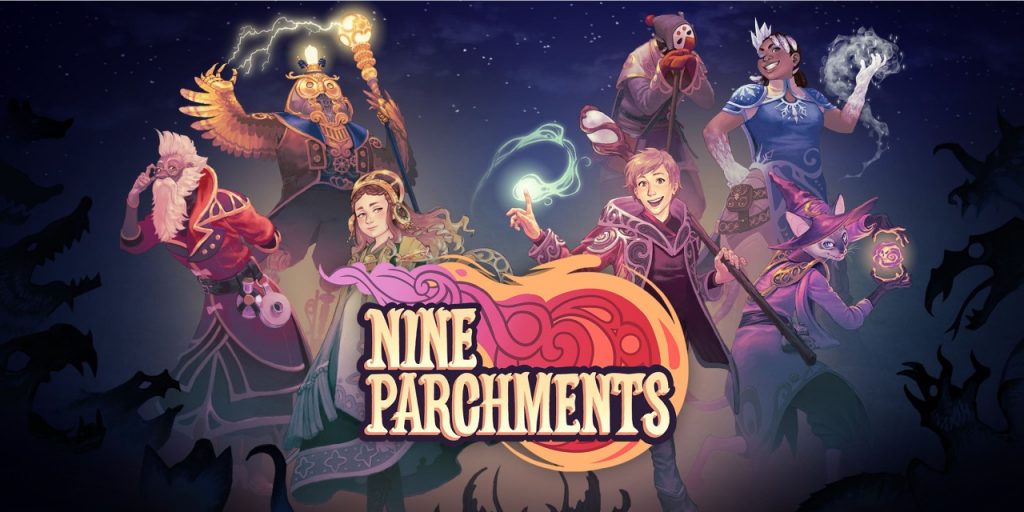 It’s time to take your twin-stick shooters to wizardry school in this new game developed by Frozenbyte, the minds behind the excellent Trine series. However, you won’t be spending long there because shortly after the introduction to the game, the game’s wayward cast of students opts to abandon the hallowed halls of learning in favor of going out into the wide world on a quest to seek out more immediate power in the form of the lost Nine Parchments. And what a beautiful world it is, as you are tasked with exploring a wide range of colorful bloom-riddled environments ranging from tropical shorelines to frozen, frosty peaks. And, while these environments can be explored in the comfort of your own home, the real pleasure comes when played in the company of friends in person or online. 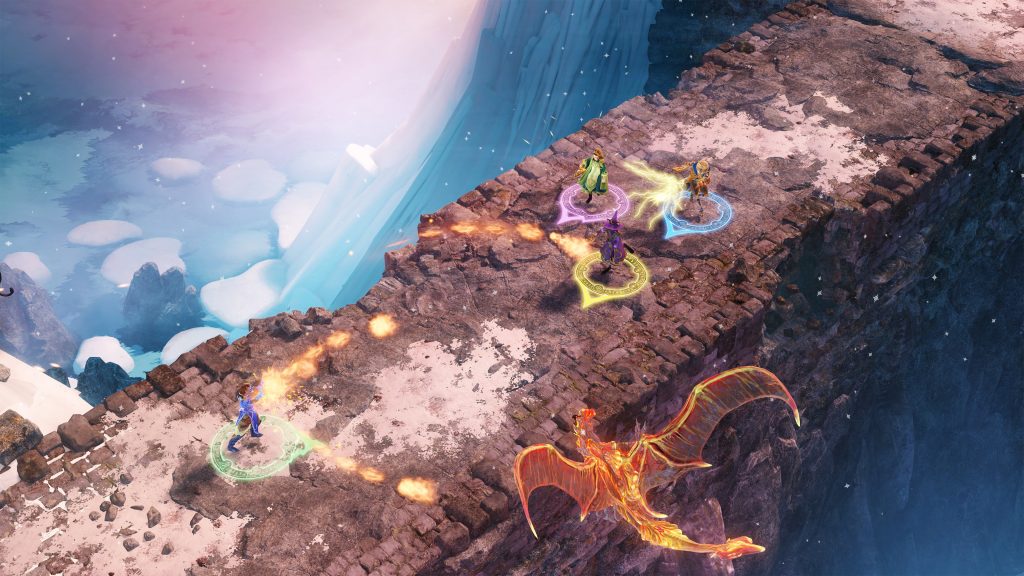 Initially, you begin the game by selecting between two students. Both of these students have three default combat spells. Every spell in Nine Parchments is defined by an element, a projectile type, and a mana cost. Each elemental type falls onto a power table defining it as being super effective against one type of element while performing lackluster against another. Projectile types define how the spell behaves. They come in many varieties, with such examples as concussion blasts, beams, and field generation. Additionally, every spell also has a cost per use which drains a mana bar each time. This bar can be replenished by using items dropped by foes or it recharges over time when not in use. Care must be taken to not go overboard though, because if you completely tap the bar, you are penalized. The spell goes into a cooldown mode preventing it from being used until completed. Thankfully, each spell has its own mana bar which allows you to freely switch between different ones in order to give each spell a rest. 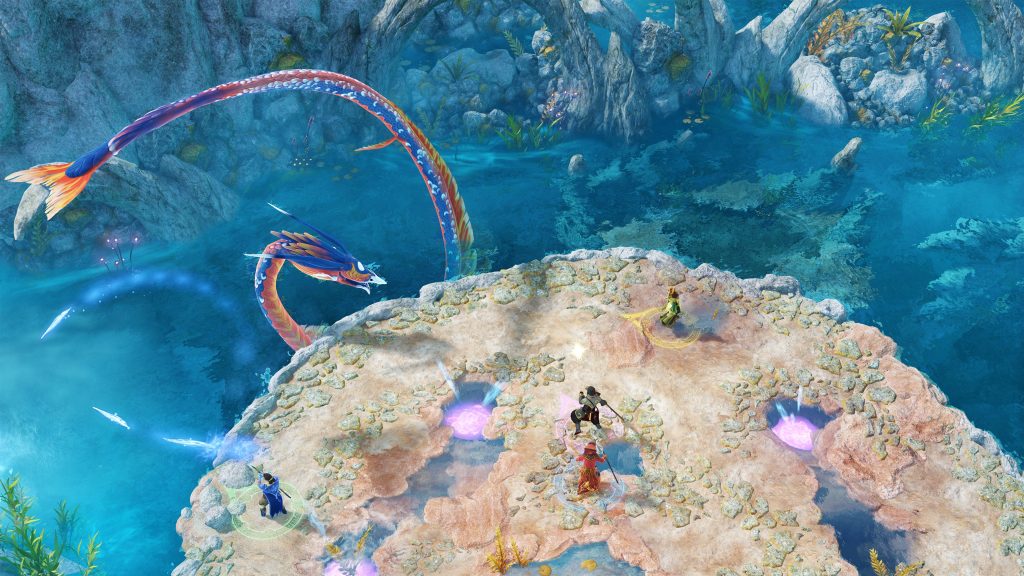 Nine Parchment’s difficulty ramps up quickly. Be sure not to fall behind!

Post character selection, a brief tutorial takes place and then the game begins in earnest. The flow of each stage consists of players progressing along a linear path, occasionally taking on platforming challenges until they enter into an arena segment where they must fight a variety of monsters in order to progress.  These monsters come in many shapes and each embodies an elemental property, making each skirmish a frantic exercise in leaping, dashing, lobbing, and blasting to eradicate all enemy opposition.

This starts out simple, but quickly ramps up to involve more complex enemy waves. Sometimes, foes will be surrounded by barriers that make them immune to certain elements. In other cases, you may see monsters which have a field that protects them from specific elements, which also protect enemies that are close enough to fall within the field. These sorts of combinations make it VERY possible for you to find yourself walled off from doing any sort of major damage to foes short of using your melee attack. However, as this game is very much a chaotic projectile magic twin-stick shooter, you really don’t want to find yourself faced with that decision. Fortunately, every couple of levels, once a boss is defeated, players are offered the choice of one of three different randomly offered spells to add to your repertoire. Wise selections and a lack of over-specialization will allow you to be the most effective mage that you can be! 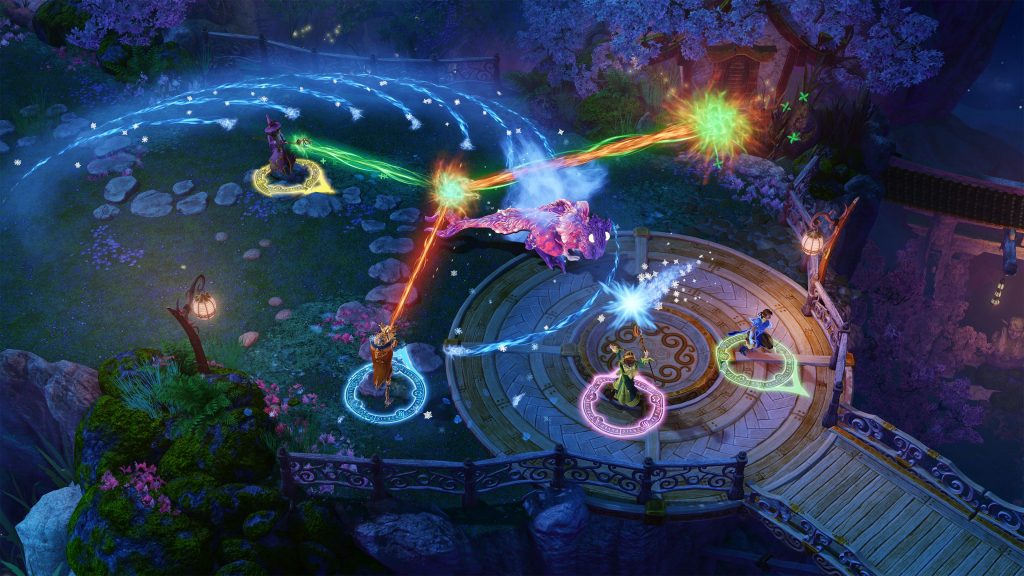 It’s always best to be prepared for anything.

Character growth goes beyond spell acquisitions as well. Each defeated enemy gains you experience points, and they can be spent to activate various skills for each character. As play progresses, various accolades can be completed which can unlock additional characters or skill trees. Treasure chests are strewn about each stage and can contain hats for adding a personal touch to your mage or magical staves that can be equipped to give characters different properties as well. Some of my favorite abilities gained from these staves are increased mana regeneration to keep me in the fight longer and blink healing which allows you to regain a portion of your health each time you perform an evasive dash maneuver. All of these available options combine to ensure that no two playthroughs for any of the available characters have to be the same. 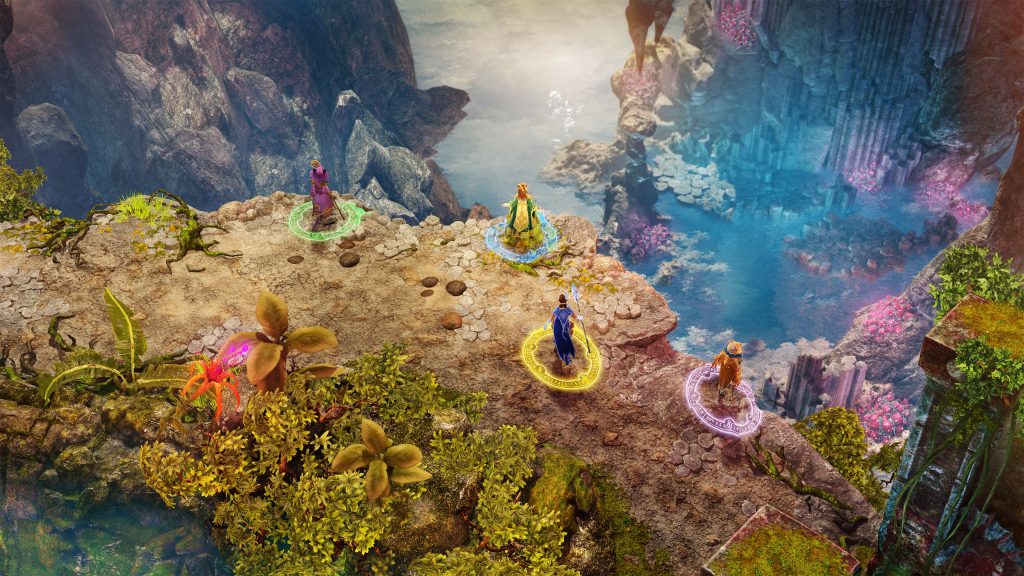 Single player is serviceable but, in my opinion, this game requires the multiplayer experience in order to enjoy it to its fullest. When friends join gameplay, what was once predictable becomes unpredictable; between friendly fire and spells going awry, the chaos encourages repeat play. However, once your wizarding team comes together like a well-oiled machine, there are also co-op attacks that can be performed by combining spell beams into bigger, better, and more powerful blasts to ravage the battlefield. Downed players can be resurrected by teammate resuscitation but, in the event that the entire team goes down, continue points are close enough together that it never feels like a chore to repeat a section. In this way, it feels a little like the PC game, Magicka.

Unfortunately, even with everything I mentioned above, this game still runs the risk of feeling repetitive over time. Games like Diablo mitigate this through the use of a constant series of loot drops of various rarities. However, this game’s loot is limited solely to hats and staves, the former being only cosmetic and the latter not being very plentiful. But it is also likely that Frozenbyte didn’t intend for it to have that level of complexity. It seems that they want players to just get some friends together, select a mage, and go crazy lobbing spells around the battlefield. When I look at it from that perspective, I feel that this game accomplished what it set out to do, and I can easily see myself playing quite a few more sessions of this with my buddies before setting it down.

One big point that I need to mention is that this game only allows for one save file to be kept at a time. So, if you start a multiplayer or single-player session, you are locked into completing it unless you want to start campaign progress over from the very beginning. Goals met toward unlocking new characters remain saved, but progress and character building does not. The developers mentioned via Reddit that they intend to remedy this with a future patch, but I felt that I needed to mention this here in the off-chance that someone reading this review wants to consider this game in its current state.

Full disclosure: This review is based on a review copy of  Nine Parchments provided by the publisher.

Quintus and the Absent Truth Review: A Not So Mighty Mouse   Sometimes a bedtime story just needs a little something extra to keep the kiddo interested. Well, horror’s…