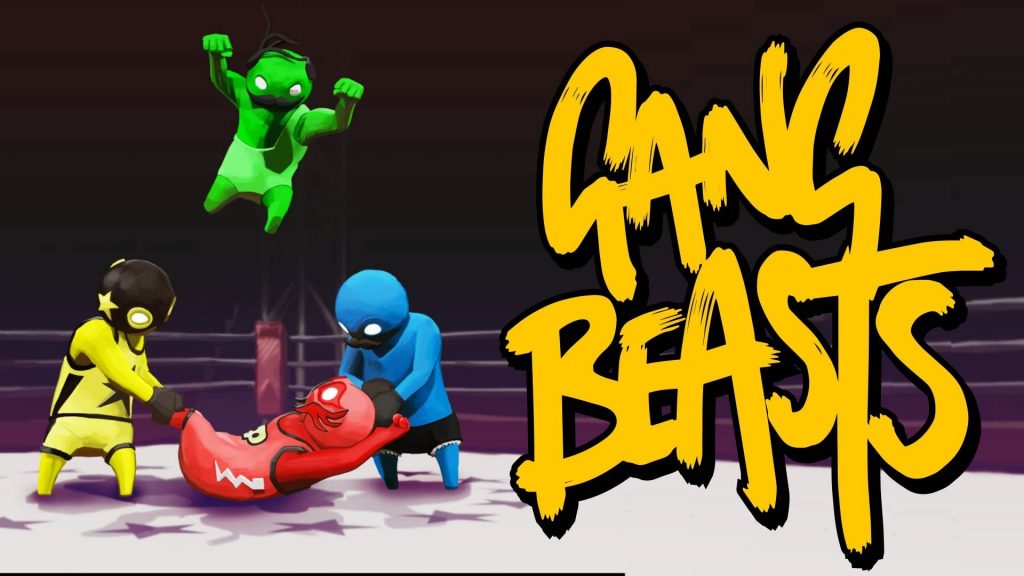 Recently I reviewed Dynasty Feud, a party game that is both complex and compelling in its variety and choice. Now Gang Beasts, developed by Boneloaf, is another kettle of fish entirely and is what makes it so damn enjoyable.

Let me explain. Gang Beasts does not take skill, which already sounds off-putting to a few individuals I’m sure, but I promise that despite not needing skill, this game is so incredibly rewarding. The reward is simple: the absolute feeling of delight as you and your friends laugh, cry and thoroughly enjoy the experience. 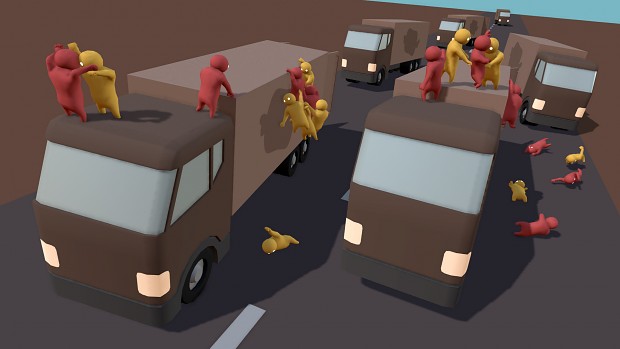 “How do you GRAB things?”

If you think Gang Beasts is going to hold your hand and tell you how to do things then I’m sorry to say that you’re dead wrong. The conversation between me and my friends as we played this, button smashing and shouting, was simply insane and summed up the ‘controls’ perfectly.

“How the hell are you concussing me all the time?”

“Jesus Christ, how do you GRAB?”

“Is there a chuck button? How are you chucking me?”

“Is there a f*cking tutorial in this game?”

No, there isn’t a f*cking tutorial and it’s great! You’re (quite literally sometimes) thrown into the deep end when it comes to Gang Beasts – in ALL game modes, may I add. There is a lot to learn sure, but nothing to truly master. In a weird way, it makes Gang Beasts comforting to play because most players are just there to have some fun. It isn’t competitive unless you make it, and sure you can say that about a lot of things but you rarely feel the sentiment – with Gang Beasts you definitely do.

Don’t want to simply beat each other up explore the map? Sure, go ahead. Want to test the laws of gravity and physics by jumping up and down (rag-doll style) on the railings of the gondola? There’s nothing stopping you! Do you want to hold BOTH of your friend’s hands while trying to throw them off a building? DO. IT.

The world is your oyster and Gang Beasts likes to reward you for it.

Character Creation Aka Show Off Your Individuality 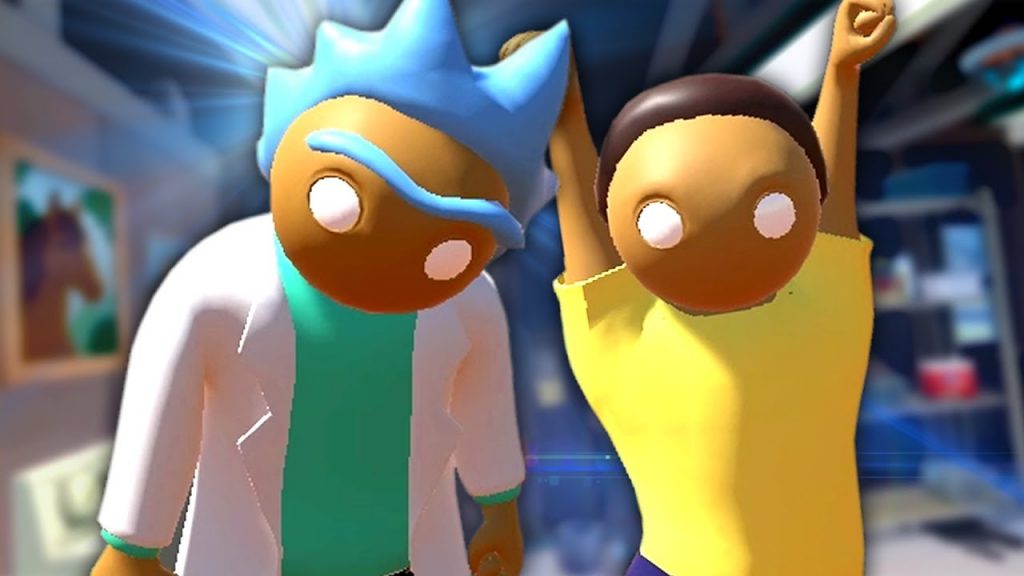 If you’re even playing Gang Beasts right now I somewhat already know a little about you. You like to be a bit silly, have some fun, so that’s mostly a given when you meet other players on multiplayer. But Boneloaf has given us, the players, more to work with by having a customization feature where we can mess around and create our very own wacky rag doll creations.

Sure it’s no Skyrim or Dragon Age, but there wouldn’t be much point if it was now would it? What matters is you have a lot of variety on how to customize yourself (as well as earning a nice little trophy, heck yeah,) whether that be Super-Saiyan looking dude or a wizened old grandma with a mustache. Regardless, it’s a fantastic way to express yourself and good on Boneloaf for including it when they didn’t have to. 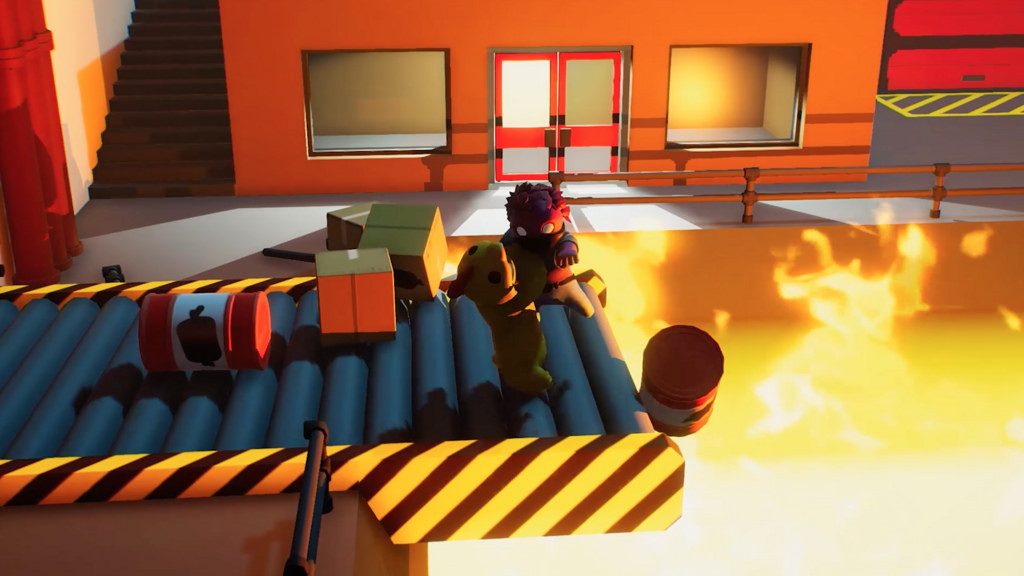 Despite my hype, I’ve got some reservations about multiplayer.

Don’t get me wrong, multiplayer is pretty awesome. With multiplayer, I can actually complete more than two waves in the Waves mode, which you know, is quite the accomplishment. But there’s a different sort of feeling in multiplayer, playing with strangers, than it is playing with friends. It can still be quite funny, captivating and easy-going – just not in the same way it is with friends.

Technically that isn’t Gang Beasts fault. For example, it has some cool modes that try their best to keep up that entertaining vibe that its got going on, modes like Football, in particular, is one of my favourites to play with or without friends next to me. Rag-doll kicking and pushing and sliding on the floor to even get a goal? It’s bloody hilarious.

Of course, there are other modes. Waves, like I mentioned above, is a mode where the game throws tons of AI enemies (some looking like mini replicas of the Trump family, not even joking here) at you that try to concuss you, drag your unconscious body and chuck it into a grinder, incinerator and other various machines of destruction. Your job is to chuck them in there first which is…Well, good luck with that!

Another mode is just called Gang, where (you guessed it) you and other players are divided into separate colours, representing your gang colour. I didn’t play this mode on co-op because there wasn’t enough of us, but when I played it on multiplayer it genuinely just felt like Melee mode apart from there was a few more people involved. Not much really changed.

Shame really, I always wanted to be in a gang. 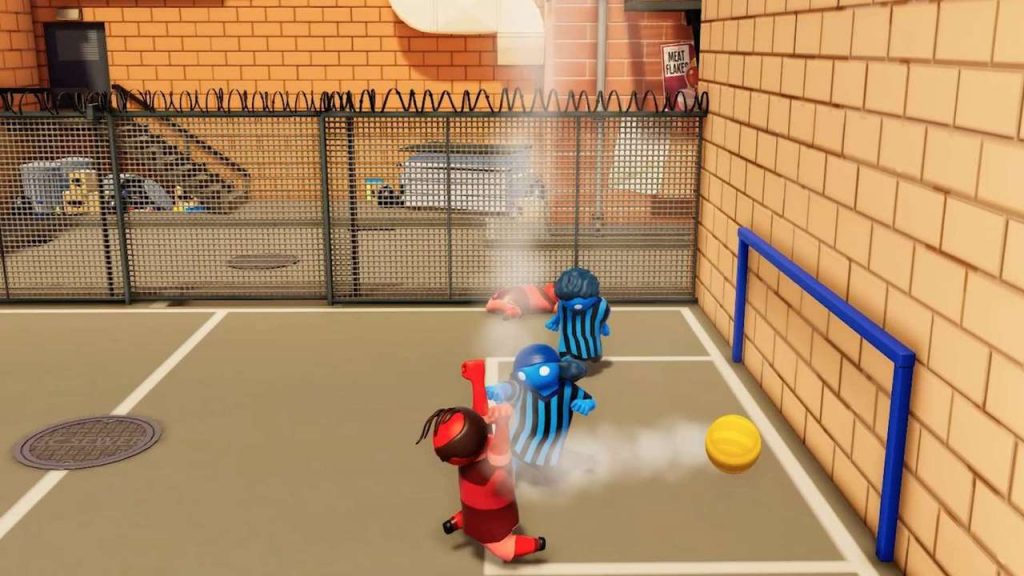 Technically this goes under multiplayer, but alas I wanted to show off these cool football shirts.

With my impression of multiplayer already not at its best, the servers disconnecting and players simply leaving before a game starts is incredibly frustrating.

Today I played a game of Football where the server disconnected, then after rejoining the opposite team was nowhere to be seen. So about three minutes of doing nothing but brawling with my teammates, sure it was a laugh but after the third time it really, really starts to get old.

Players disconnecting is fine, but actively leaving? I said previously that Gang Beasts is an easy going game where winning doesn’t matter! Well, I still stick by that. But I still feel pretty lame just winning because everyone else decided to pack their bags and quit. It stops being fun and instead feels like you invited everyone to your party but they all decided to drop out at the last minute.

There’s also a question of replayability. I’ve seen quite a few reviews say that this game lacks that and, in some ways, I do agree, yet in other ways, I simply think people are missing the point of Gang Beasts. It’s a slapstick, silly game that requires nothing but the willingness to have fun with your friends, which I assume everyone wants to do every now and then. Sure, I don’t see me going on it every single day, but from now on it’s definitely going to be a part of the video games me and my friends play together. That’s more than enough for me. 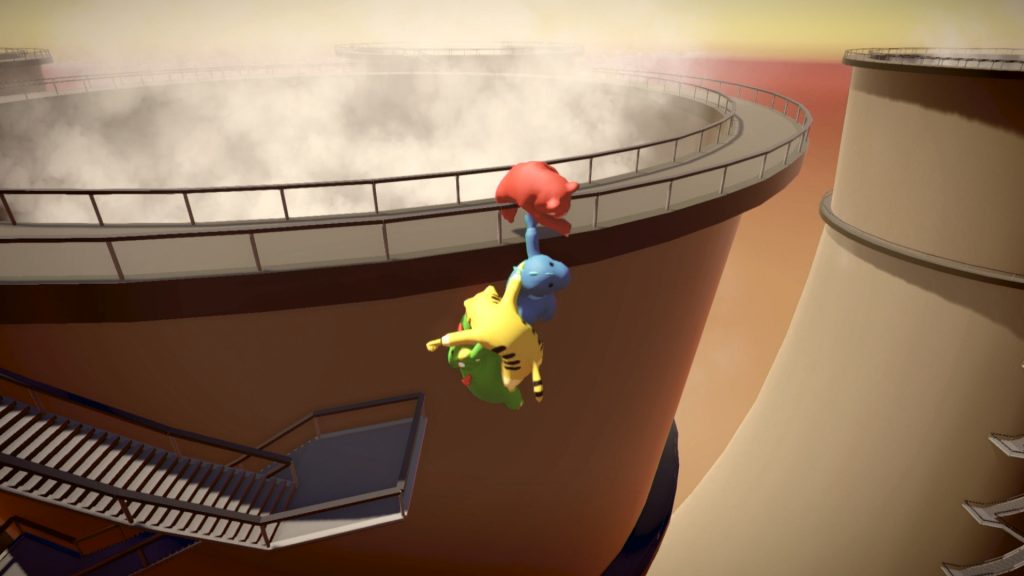 Overall, I genuinely believe that Gang Beasts is going to be one of those games that stick around for a very long time. It’s not free of problems and while there is a variety of game modes, there is an understandable need for more. There’s also the issue of getting more enjoyment out of the game in co-op than in multiplayer.  Yet it should be noted that the PS4 version of Gang Beasts is still recent, thus is almost guaranteed to get the same love and attention that Boneloaf have given to the PC version of the game.

But despite all this, Gang Beasts has got to be one of the biggest contenders for one of the best party games kicking around in 2017. It’s quirky, unique and a great game to come home to and play with your friends. I can’t wait to see how Boneloaf proceeds with it and future games.

Full disclosure: This review is based on a retail copy of Gang Beasts.