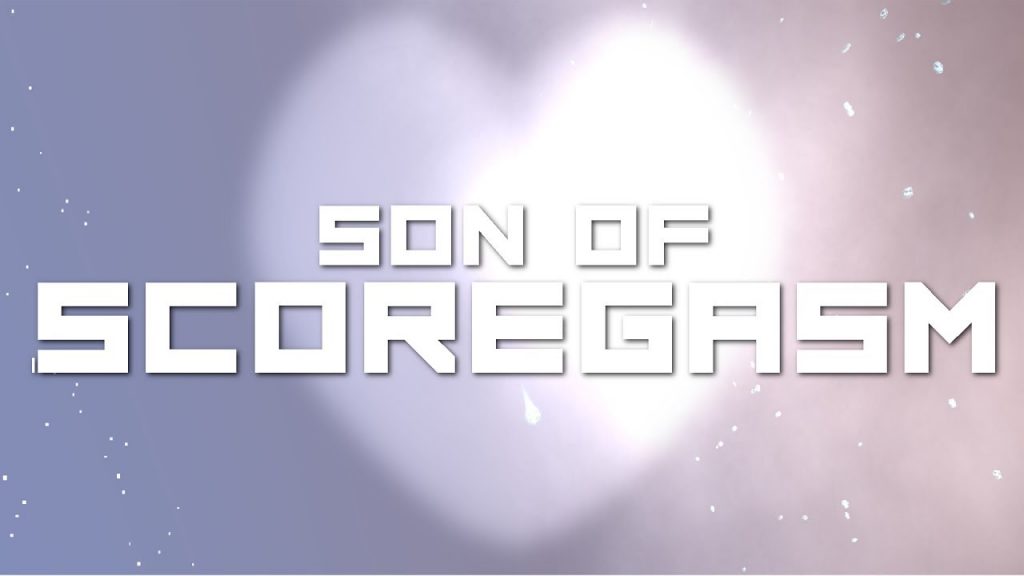 Have you ever wondered what would happen if you took Galaga to a club in Las Vegas, let it do lines of coke off the neon bar counter and then watch it eviscerate some bozo in an impromptu dance battle? The resulting sense of bewilderment and adrenaline is Son of Scoregasm. With its flashy, overstimulating design, relentless flurries of enemies and rapid gameplay, Son of Scoregasm is a game so jam-packed with stimuli, you almost feel as if your brain can’t keep up. It’s entertaining- in an overwhelming sort of way.

Get Good Or Else 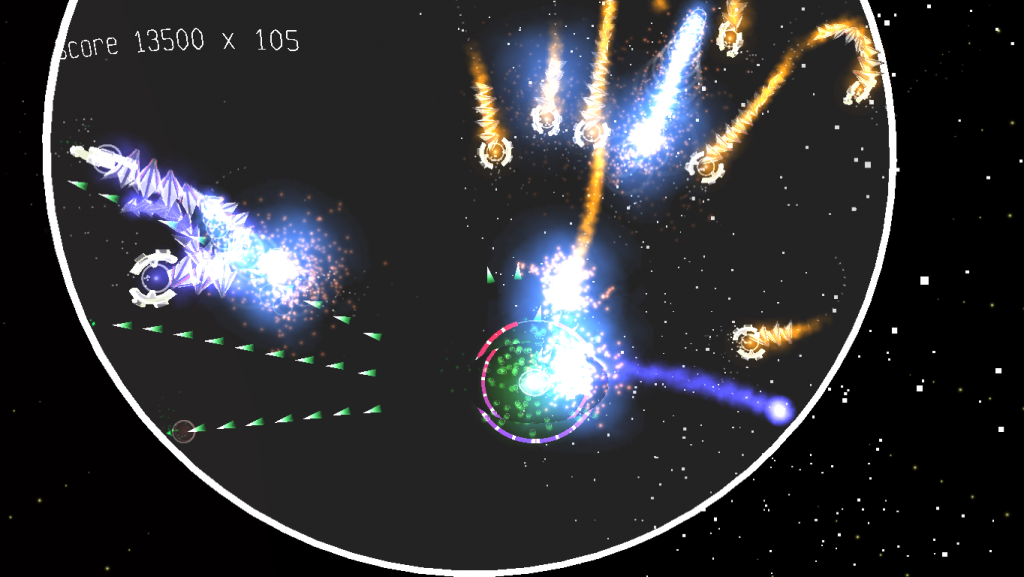 Son of Scoregasm is a twin-stick shooter requiring fast movement and even faster reactions to cut through the waves of enemies. Your primary attack is a blaster that gains power as you land shots on enemies; consecutively destroying enemies causes your single blaster to upgrade into a triple shot. Additionally, as you continue to shoot down incoming targets, the pulse attack meter fills up. The pulse attack immediately destroys enemies in a ring around the player. Enemies will be flying at you from all directions. Using the pulse attack will give you some breathing room as these enemies close in. In order to win, players must be able to maneuver the small space quickly while filling up their pulse meter in order to avoid being boxed in.

The premise is rather simple, but each level is a thoughtful variation on this gameplay. Stages are restricted by traps and different geometry, giving the player a tight space in which to maneuver. Enemies can shoot, explode or even manipulate the traps around the stage. Levels are as engaging as they are enraging. There are so many things happening on screen that you feel overwhelmed; death is almost inevitable the first couple times you play a level. However, downtime between deaths is so short that I felt compelled to keep restarting. I learned quickly from past mistakes and was eager to thwart the enemies that destroyed me on my past run through. There is a great satisfaction in the routine of adapting to the challenges of each level, overcoming them and moving on to the next test.

Son of Scoregasm does a great job keeping gameplay engaging and fresh. With such a simple premise, it would be easy to fall into a monotonous cycle of enemies. With the addition of traps, level restrictions and evolving enemies, each level of the game is a completely new and compelling experience. 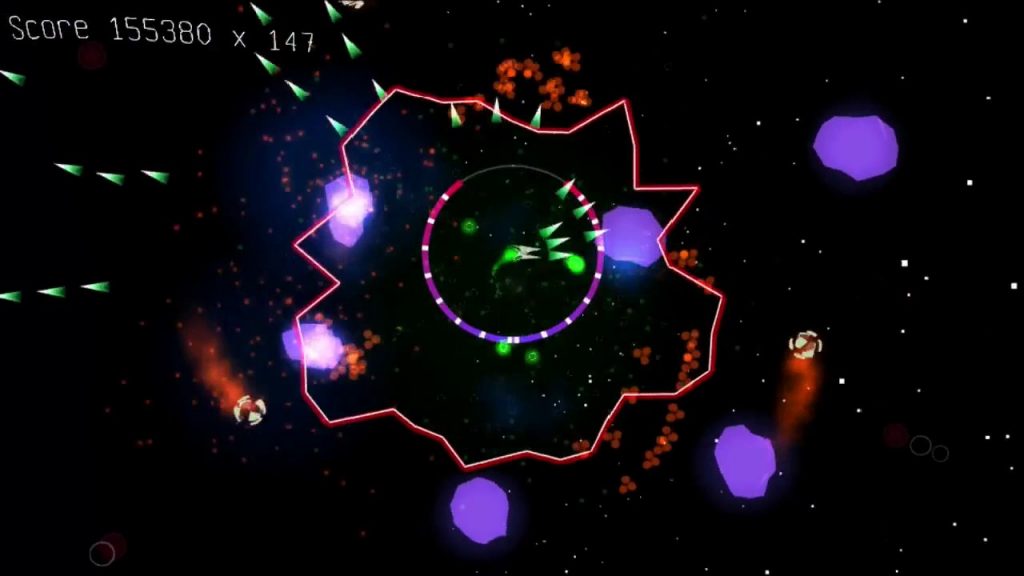 Levels have two stages. At the start, enemies attack with a fairly consistent pattern. At the halfway mark, “Get Ready” flashes on the screen. The stage turns dark and more difficult enemies appear with increased frequency, turning the last half of the level into a complete frenzy. The game doesn’t give you a chance to rest or to think; it’s all about reaction. At times, this portion of the stage can feel insurmountable. So many enemies appear at once that I felt like the developer was sitting at home, laughing to himself about how players will never beat his levels. However, enough practice at each stage eventually leads to a win. These levels are so short and explosive that it doesn’t feel exhausting to have to begin again.

As you complete each level, you can choose to move on to an easier or more difficult stage, creating a branching tree of levels ending in a boss. These bosses unleash a flurry of attacks and enemies that often encompass the entire map, requiring players to deftly maneuver around them and conserve their pulse attacks. It takes multiple tries to analyze the attack patterns and adapt accordingly. These bosses feel as though there is a well-earned challenge after completing the preceding levels and defeating them feels even better.

Son of Scoregasm has an excellent ambiance. The background track is energizing, yet unobtrusive and the colors are kinetic and energizing. I often got so engrossed in playing the stages, that I didn’t take the time to really take in the soundtrack. However, in the silence between tracks, the absence of those tracks was noticeable. The steady pulsing of the music throughout the stages is part of the experience that completely swallows your attention and fuels the player to keep playing. I had complete tunnel vision playing this game. It’s impossible to succeed without complete, undivided attention. Explosions of cool, electric neon against a soft gradient background really pop. This game looks great, sounds great and is incredibly addictive to play.

Admittedly though, this game does get incredibly challenging once you start to tackle the harder levels. Some of the stages are punishing and insanely difficult. Some patience is required to get through these stages; you’ll find yourself going at a level a good many times before you can complete it. Sometimes I felt as though it was pure vengeance propelling me to complete a stage, but in terms of a game like this, I wouldn’t say that’s a bad thing. Once you get through it though, you stop to think about how many enemies were just on the screen and how you managed to cut through all of them in a blind frenzy and you’ll say to yourself, “I really did that.”

As an aside, I started playing these game on the PC using my keyboard. About halfway through, I transitioned to using a controller and I found that I was able to maneuver a lot better. While levels were still challenging, I felt that the fluidity of motion provided by a joystick was much more suited to tackling the stages of this game.

I don’t regret letting Galaga do that extra bump. Son of Scoregasm was challenging and high-energy, yet rewarding. Sure, it may have been a little too wild at times. “Slow down!” I would plead, but it wouldn’t listen and that was okay. I am a much more harrowed gamer because of it. There isn’t a laundry list of levels, but the levels that are there are challenging enough to keep you playing for a while. Scoregasm gives that retro gaming feel, an injection of modern energy, and tempo for an all-around enjoyable experience.

Full Disclosure: This review is based on a PC review copy of Son of Scoregasm given to HeyPoorPlayer by the publisher.