Beat The Street Heat…With Another Game 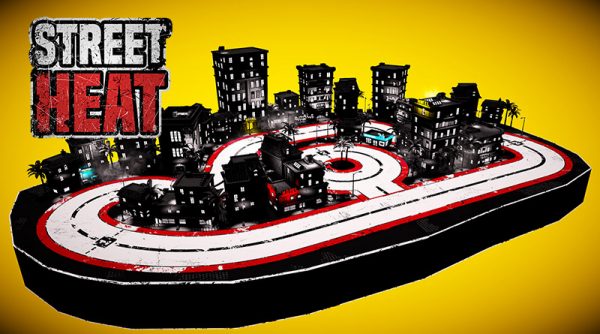 Racing games are a dime a dozen, it’s true, but that doesn’t make me love them any less. When you’re an adrenaline junkie living in a residential/urban area, sometimes a good racing simulator is the closest you’ll get to going over 50 miles an hour on a given day. At least, without the application of a ticket to compliment your day.

Still, for all the commonality of racing games, good ones are hard to come by simply because they’re so easy to make. First-time developers can crack these out like they’re nothing, and often do. The problem with that is that you end up flooding the market with perfectly functional, yet utterly boring racing games that fail to stand out in the market.

This, unfortunately, is Street Heat in a nutshell. A common enough top-down arcade racer with a great soundtrack, but little else to show for itself.

Bring The Heat! No, For Real, We Could Use It. 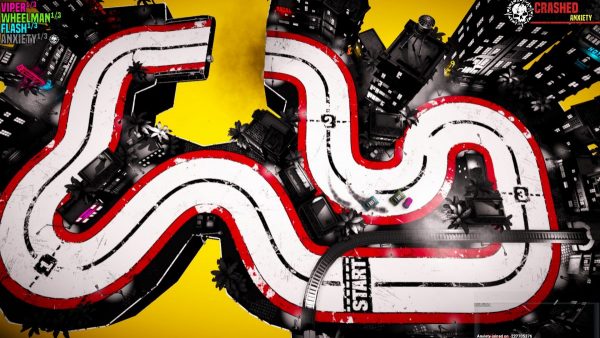 As previously stated, Street Heat allows for up to four players to compete against each other in a top-down arcade racing experience. Currently, you can play locally or online, but unless you’re playing with friends you’re likely only going to be up against the same AI regardless of the game mode you choose.

Players race a varied amount of laps depending on the map they’re currently driving and are awarded points based on how well they do. The first player to twenty points in a series of races is considered the overall victor, and the round ends. Racers can either play again, or quit.

Easy enough to be sure, but for the number of times I played solely with AI and how complicated the controls are, you’re going to have a rough time eking out any victories for your first few hours of gameplay.

The maps aren’t lacking in their own obstacles either. There are oil slicks that cause both a loss of control of your vehicle as well as – and I’m convinced of this – framerate drops. They are also lined with buildings and foliage that players can get stuck on, and if that’s not bad enough there are locations where one can altogether fall of the maps. Throw a train in on occasion to either block your path or collide with you entirely and you’ve got yourself something akin to Mad Max meets Vice City. Given the nature of the game, if you do crash or fall off the map you’ll be waiting until the next race to participate. Fortunately, races aren’t long enough to get bored, only irritated that you’re not out of what little fun this game provides for a round.

Drifter In The Streets. 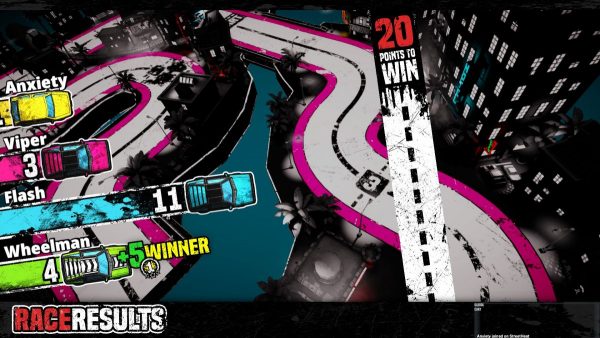 I’m getting real suspicious of this “Flash” guy.

Given that the game is currently in Early Access, it’s almost easy to forgive its current shortcomings. However, when you really think about it for more than a minute, it really isn’t. The game looks great visually and has a pretty fantastic soundtrack reminiscent of the likes of films such as Drive and just about anything by Tangerine Dream. But aesthetics and music are the only places this game delivers. It holds almost all the fun of a Nascar event in that you’re just going around in circles until someone crashes or wins (usually both) only to do it all over again.

While there are a good number of maps to count in the game’s favor, the obstacles and patterns don’t vary up much. You’re limited to turnabouts, jumps, tight turns and the aforementioned obstacles that were so commonplace that they barely allowed the player to get a real leg up in the race.

If Street Heat wants to clean itself up and become a real contender for my library of racing games, it’s going to need to add more features. First and foremost, developer Astalo Games needs to include getting more than one vehicle for racers as well as customization options. Playing the same car over and over again is not an appeal for racing game aficionados, I don’t care how casual your game is meant to be. They should also consider varying up their obstacles. Maybe lose a few of those oil slicks to make some of those maps more accessible for players that are just starting your game. Astalo also needs to allow for single map races. Maybe add a feature where players can make their own maps too. Just a thought.

Snoozer In The Sheets. 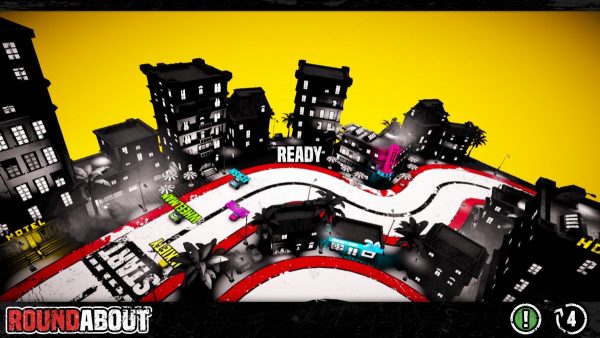 Regardless, as of writing this, I am less than impressed with what Street Heat has to offer. For $7.99 and being made with Unity, this game is simply lacking in anything that makes it worthy of more than a few rounds with friends; and even that should probably be accompanied by copious amounts of alcohol.

My point is, there are more fun things to play with friends, and there are certainly better things to play alone. The game isn’t broken by any means, but it’s not fun either. You can do better than this for entertainment. I recommend you do.

Full disclosure: This review is based on a PC review copy of Street Heat given to HeyPoorPlayer by the publisher.