God Save The Queen – Long May She Reign! 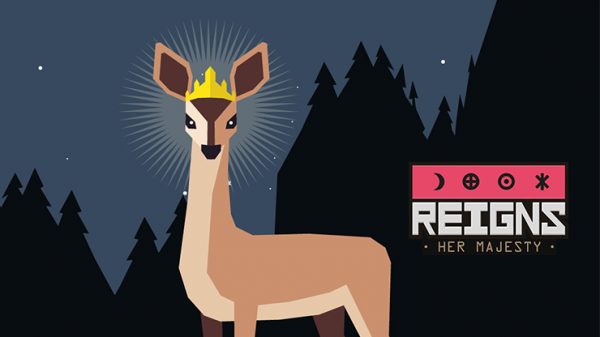 Imagine if diplomacy was tackled with all the mechanics of the Tinder app. One swipe, be it left or right, setting the groundwork for the basis of your kingdom. Well, if you’ve played Reigns, you likely already know what I’m talking about. The mechanics of the official sequel, Reigns: Her Majesty, offers little deviation in this, aside from perhaps some more polished artwork.

If you are unfamiliar with the series, the gist of the game goes as such: people ask you questions and, well, you answer them. Based on your answers, they are either pleased or displeased. This doesn’t sound too bad, except that you have to maintain a balance between the four different factions of your kingdom. These factions are the church, the people, the army, and the bank. You’ll know right away which factions will be affected by your choice based on little blips that appear above each faction symbol. However, you don’t know whether it will be for good or ill until after you’ve made the choice.

Seems easy enough, right? Well, no. Not exactly. The thing is, you don’t want these factions to become displeased with you, but you don’t want them to get too comfy either. Maxing out a faction’s attribute will lead to your death as surely as depleting it. Strange? Yes. But it would be too easy if all you had to do was make everyone happy all the time.

Be sure to remember how each group reacts to your responses as well. Knowing how to manipulate your court will be key to a long and prosperous reign.

While this is the bread and butter of the Reigns series, this isn’t all there is to the game. It has a surprising amount of depth, despite its simplistic first impressions. You likely won’t get much of that until a good half an hour or so of gameplay, but if you can make it that long (and you probably will – it goes fast) Reigns: Her Majesty will start to charm you in ways you might have not thought possible.

You Can Either Lead, Follow, Or Get Out Of The Way 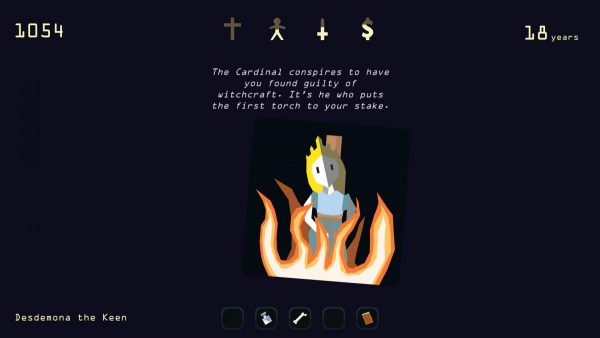 Burned at the stake! …this happened to me a lot.

As the name suggests, you play a queen of an unnamed kingdom. It is up to you to ensure the nation is satisfied with your performance, lest you suffer fatal consequences. If you do die – and you will – you’ll be reincarnated as the next queen, an ability gifted from a mysterious being known as All-Mother, whom you will meet a few sessions in. Thus, the cycle goes on in perpetuity until you reach your final goal. What is that goal? Well, pay attention, because each death gives you a few more clues from the All-Mother. They’re pretty vague at first, but the more you read into it the more you realize that the game leaves you clues as to what you’re supposed to do.

If you’ve been listening up to this point, you’ve likely already realized the major issue someone might have with this game: repetition. Given that, for the most part, it seems like you’re only swiping right and left to respond to questions posed to you by your court, things can get dull. To make matters worse the game ends up repeating many of the questions and small story elements. This can escalate one’s frustration and truly test their patience. Remember though, there’s more to this game than meets the eye. If you find yourself in a slump, experiment with your gameplay. The game is actually ridiculously fun, you just have to know what it wants you to do.

As you progress in the game, new faces are added along the way, such as an explorer, an acolyte of the aforementioned All-Mother, a witch, a barbarian woman from the north, and so forth. These characters are all necessary additions, so when new faces come into the fray make sure you do what you can to keep them. If you accidentally deny or dismiss them they will eventually come back, but try not to do this as it will prologue unnecessary aspects of the game.

Upon first impression, the game can appear like a garbled mess. All of these additions don’t help with the repetition as much as they should, and in places where the game ought to get exciting, you’ll find that the mechanics may not be explained to the player as they need to be. In the end, all this means is that everything you do, you’ll do again. And again. And again. 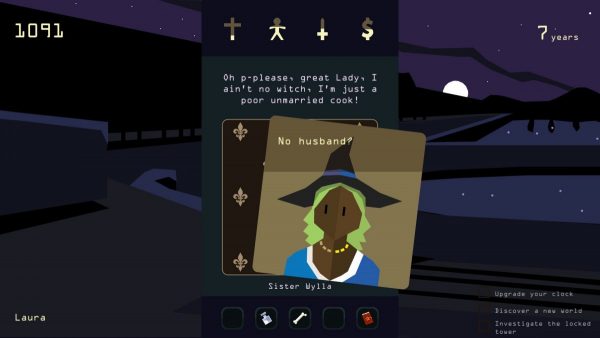 Ahh. To kill, or not to kill? That is often a question.

This may not be the most encouraging insight on Reigns: Her Majesty but I’m far from done.  The repetition is taxing to be sure, but the game makes up for it in the hidden treasures and interactions you can find during your playthrough.

Earlier I mentioned adding new characters to your game. Well, with certain characters also comes the option to obtain and upgrade items. Never pass these up, as you’ll need them to ensure success as well as the best possible ending. For example, the barbarian will give you a gun. Another a clock, another a spell book, and so on and so forth. These items will be placed in an inventory like slot section at the bottom of the screen. To use them, all you need to do is drag and drop them onto the appropriate character card on screen. Don’t get too rash with this, however, because things don’t work for everyone, or in every situation. Furthermore, using an item at the wrong time will cause your attribute ratings to deplete, which in turn will get you killed if one or more of them empties completely. It is, therefore, best to be smart about your applications.

That being said, remember that the game’s events are cyclical. The best thing you can do is to experiment with all of your options and see what offers different outcomes.

God Save The Queen, She Ain’t No Human Being 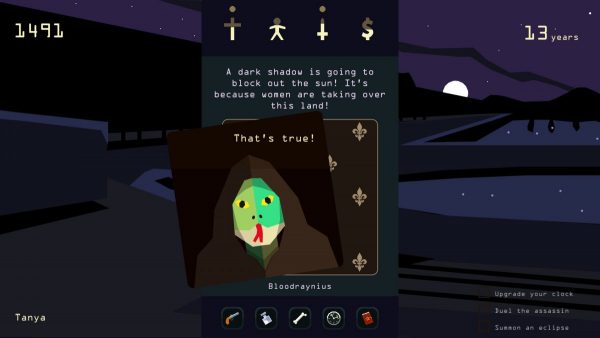 Hey look, the alt-right is here!

When I first started Reigns: Her Majesty, I was uncertain how I felt about it, much less how I would rate it. The game doesn’t really explain itself when you start playing, likely relying on familiarity with the first game instead. Thankfully the majority of the mechanics are pretty easy to pick up on, while the rest can be learned through a (sometimes exhausting) trial and error process. Yet as the game opens up, its inner charm starts to shine through. The player will (hopefully) begin to solve the hidden puzzles that lie within the narrative while successfully navigating the pitfalls of court life, surrounded by people who really want nothing more than to see your queen fail.

I appreciated the cleverness of Reigns: Her Majesty as much as I did the gameplay, but I also feel it’s important to realize that this kind of game isn’t intended to be played in one long session. My biggest points of frustration were likely more a result of excessive playing and slight burnout over the repetition than anything to do with the actual game. Therefore I implore anyone who is taking this series on for the first time to remember that when they start.

This review probably sounds like a mixed bag of emotions and frustration, but I assure you Reigns: Her Majesty is an amazing little game and is exactly the kind of thing I have come to anticipate from publisher Devolver Digital and developer Nerial. If you’re looking for a mobile or PC game that just breaches the casual bracket with some goofiness in tow, this game is at exactly the right asking price.

Full disclosure: This review is based on a Steam review copy of Reigns: Her Majesty given to HeyPoorPlayer by the publisher. 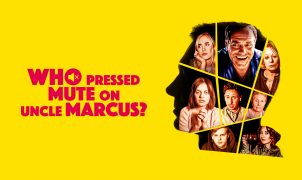